There are fears that the North African form of Dark Chanting Goshawk may now be extinct.

Found only Morocco, Melierax metabates theresae has not been observed since 2007. The form was restricted to the argan forests of the Souss Valley and the nearby Anti-Atlas foothills, after its range shrank in the middle of the 20th century. 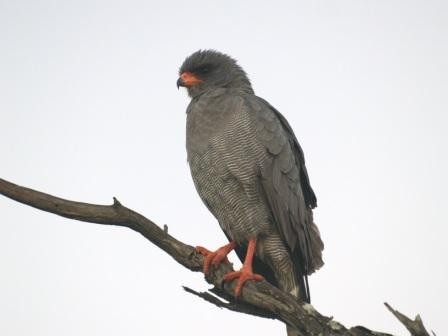 The endemic and enigmatic Moroccan form of Dark Chanting Goshawk was darker and smaller than the nominate form (pictured), which is found across central Africa (Chris Jones).

The extinction of theresae would also mark the outright disappearance of Dark Chanting Goshawk from the Western Palearctic, as it can be found nowhere else in the region. Never common in Morocco, the population had dwindled to a few dozen pairs in the 1980s and the last proven breeding record was as long ago as 1979, when a nest with young was found in an old olive grove.

Sightings have been very sparse in recent years and each an event in itself. An immature was last seen in the Souss Valley in 1999, proving breeding towards the millennium, but the only sightings this century have involved adults in the same area: in 2000, 2006 and 2007.

Years of diligent searching have left ornithologists convinced that no birds survive. Changes in land use are blamed for the extinction of the form theresae and therefore the loss of Dark Chanting Goshawk as a Western Palearctic species.