Multitudes of wintering birds on an estuary form one of the most magical wildlife spectacles each winter in the UK, but this scene is changing. Latest data collected by thousands of Wetland Bird Survey (WeBS) volunteers show that populations of the UK's most familiar coastal waders have declined markedly in the last ten years. Ringed Plover (-39%), Redshank (-26%), Dunlin (-23%), Curlew (-17%) and Oystercatcher (-15%) are among the eight most abundant wintering waders on UK estuaries, yet the populations of all of them are declining. In contrast, some other waders that just a few decades ago were relatively scarce in the UK have increased — since the winter of 2001/02 Avocet numbers have risen by +61% and Black-tailed Godwits by +57%.

Millions of waterbirds overwinter on the UK's wetlands, many of which use estuaries to take advantage of their rich food supplies. Many of these sites are legally protected as Ramsar Sites and WeBS volunteers therefore help undertake an essential 'bird health check' of these flagship, as well as many other, sites by counting their internationally important concentrations of wintering waders, ducks, geese, swans and other waterbirds.

The annual WeBS report, now published in conjunction with an online interactive interface, makes this information available to anyone with an interest in birds and the environment. The new report, covering the 12 month period up to June 2013, highlights worrying trends shown by the eight most abundant waders on UK estuaries, particularly in the most recent ten year period. Precise reasons why these bird populations are changing are not fully understood, but are likely to be due to a combination of factors. Firstly, waterbird counts from across northwest Europe show that the distributions of many wintering waterbirds have shifted, mostly northeastwards, in recent decades in response to milder winter temperatures. Secondly, winter population declines noted in the UK may indicate that fewer young waders are being produced in the Arctic — improved information is therefore needed on the annual productivity of waders. The rising winter numbers of Avocet and Black-tailed Godwit are attributable to increases in their populations in the UK and Iceland, respectively. 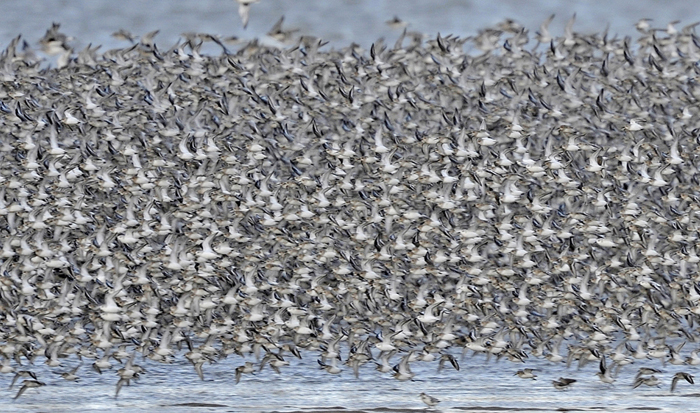 Are large flocks of Knot set to become a thing of the past on UK coasts? (Photo: Brian Rafferty)

Chas Holt, WeBS Coordinator at BTO, said: "In 2012/13, WeBS volunteers made over 34,000 visits to wetland sites to count waterbirds. This is a superb effort and has provided the vital information to show that our internationally important wintering waterbird populations are declining. Research and close collaboration with international counterparts is necessary to understand the reasons why."

Richard Hearn, Head of Species Monitoring at WWT added: "The declines in waders and other wintering waterbirds in the UK over the past decade or more, as revealed by WeBS, are indicative of wider concerns about the state of our environment. They demonstrate the unprecedented period of change that these waterbirds are undergoing, and highlight the need for a step change in monitoring and relevant conservation action if we are to avert continued biodiversity loss."