Vultures are colliding with wind turbines because they cannot see the way ahead, according to research by University of Birmingham scientists published today [12th March] in the journal Ibis, the International Journal of Avian Science. Vultures are at the top of the food chain and so their presence provides a good indication of a healthy environment. Thanks to strenuous conservation efforts their numbers in Europe have been increasing; however, they are now the frequent victims of collisions with wind turbines and power lines.

In Spain, which has a considerable programme of wind turbine installation, it is estimated that a minimum of 1,000 Griffon Vultures die each year from collisions with wind turbines. The reasons for these collisions have not been explained and are especially puzzling since vultures have some of the keenest eyes of all animals and they fly only by day. The answer seems to be that when foraging for carrion, vultures are in fact blind in the direction of travel. They simply do not see the turbines no matter how large and conspicuous they may appear to us. Emeritus Professor Graham Martin from the University of Birmingham's School of Biosciences, who led the study into why vultures are so vulnerable, said, "It is known that large raptors have the best visual acuity of any bird, so I wanted to investigate why so many are being killed in wind turbine collisions. We discovered that, when in flight, vultures are often blind in the direction of travel. This is because their visual field doesn't allow them to see forwards when they are looking down seeking carrion on the ground. We had thought that they would be keeping a look out ahead, but we have found that this isn't so; they are more interested in what is on the ground and they assume that the world ahead will be clear of obstacles. These birds evolved their foraging strategies in a world in which obstacles did not intrude into their air space. By erecting large turbines we have posed a challenge which these birds are not equipped to cope with." 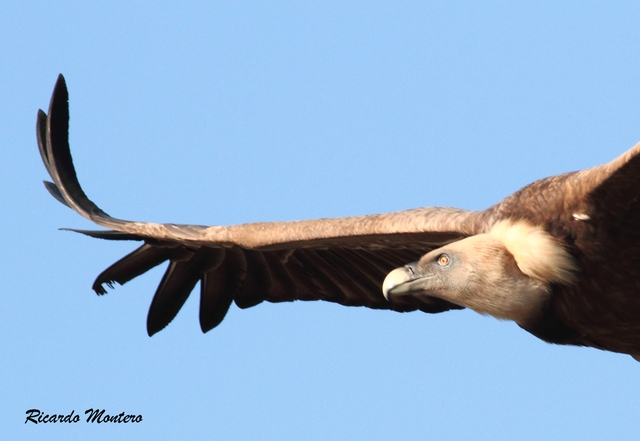 The researchers also discovered that the extensive blind area above the head, which projects forward when the birds look down, serves an important function in preventing the vultures' eyes from imaging the sun. Imaging the sun can degrade image quality across the whole retina, which would reduce the bird's ability to detect food on the ground below. "In effect vultures have sunshades. The enlarged brows, which gives them their characteristic angry look, help keep the sun out of their eyes but they stop them seeing forward when they peer down," explained Professor Martin.

The team also found that vultures' wide lateral vision (seeing sideways) allows the birds to observe the behaviour of other vultures in the same airspace. Vultures are social feeders and the researchers think that they use their lateral vision to detect when other birds start to descend to carrion on the ground. This is why large numbers can suddenly collect at a carcass.

To mitigate the number of vulture collisions, the team recommends the development of attractive foraging habitats away from wind turbines. Professor Martin continued, "Wind farms and vultures need to be kept apart. Increasing the conspicuousness of man-made structures will achieve only marginal gains as obstacles like wind turbines will often simply not be seen by the birds when foraging. Reductions in vulture collisions could be achieved by providing feeding stations, or 'vulture restaurants', away from these obstacles to stop the birds foraging near turbine installations."