The threat of Mad Cow Disease means that Spanish farmers are obliged by law to clear up any dead sheep on their land. This is potentially very bad news for vultures which, of course, rely on a supply of dead cattle to feed on. However, in a bid to conserve the vultures, the Spanish authorities have set up a number of feeding stations where carcases are provided especially for vultures. As a result, numbers of vultures, particularly Griffons, have increased rather than declined and birders are provided with wonderful viewing opportunities. In addition to substantial numbers of Griffon Vultures, it is possible to see Lammergeiers and, in summer, Egyptian Vultures at these sites.

Griffon Vulture, Sierra de Guara They may not be rare but they are one of Europe's most impressive birds. This photo was taken with only the most basic digital camera (photo: Liz Hall).

In the Sierra de Guara, visitors are invited to watch vultures at three feeding stations. How good each site is at any time will depend on how recently food has been provided; if there is no fresh food, the birds will be searching elsewhere.

This is the biggest and most spectacular feeding site. The carcases are provided regularly by lorries that drive right onto the site and dump piles of bodies. It is also the site which offers the closest views, from an enclosed hide within smelling distance of the carcases. As you drive towards Alquezar, take a sharp left turn towards the town car parks then left again, following signs to the Ermita de San Gregorio and the village of San Pelegrin. Continue on the track towards San Pelegrin until you see a track to the right signposted to 'Sendero botanico'; if you walk back along here you'll soon see the hide next to the track. If in doubt, just look for where the most Red Kites seem to be hanging in the air! You'll probably need to wait in the hide for a while before you get great views because either the vultures were present but you flushed them on your approach or they won't be around unless a fresh load of bodies arrives. If you are there when this happens you're in for spectacular viewing. Even if the vultures aren't feeding you should still be able to count hundreds of them by scanning the skies to the north. 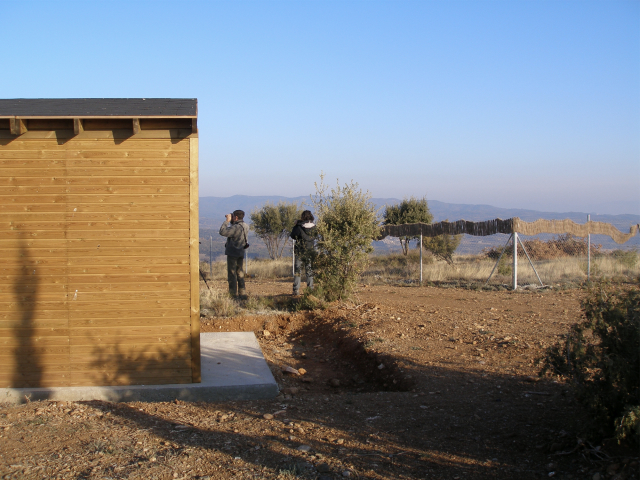 Vulture feeding station, Alquezar, Spain The food is dropped inside the fenced area, close to the hide. On our visit, there had been no food added recently so there was no point using the hide (photo: Liz Hall).

At this site, the food has to be carried by 4-wheel drive to the feeding station so it is provided in smaller quantities than at Alquezar. Another drawback is that the 'observatorio del aves' is on the opposite side of the valley from the feeding station. However, most birds arrive from the north and depart the same way so you still get great views as they pass the viewing shelter. To find the site, take the road north to Bierge (pronounced bee-air-hay, not bee-urge) and look out for a track to the left immediately after a sign saying 'Sierra de Guara'. Park near here and walk along this track, past the grounds of the Hosteria de Guara (highly recommended), past another hotel and then turn left at the next crossroads of tracks, towards the Ermita de San Pedro (the little chapel to the south of Bierge). Follow this track then take a right turn, signposted to 'Observatorio del Aves', a sheltered viewing point on the right, a few hundred yards further on. The feeding site is on the bare hilltop across the valley to the south. If you stay at the Hosteria de Guara you'll know whether there is food at the station because you'll see vultures arriving from the north while you're having breakfast. 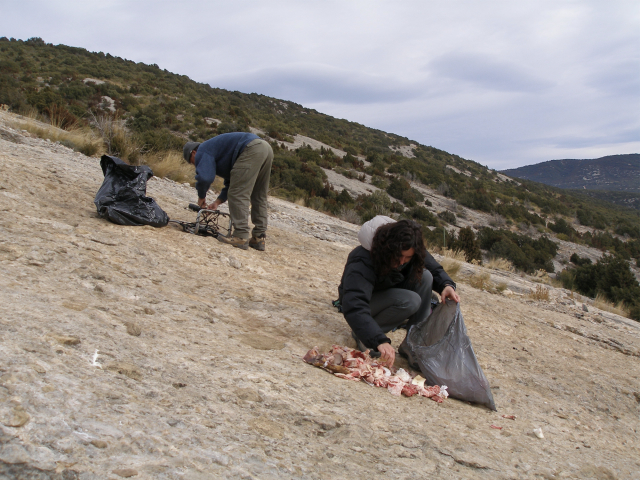 Putting out food for vultures, Santa Cilia, Spain. The meat and bones have to be carried in rucksacks to the site (photo: Liz Hall).

This is a site where the food has to be carried by hand and the 'observatorio' is on the opposite hillside but it seems to be the site most regularly frequented by Lammergeiers. The village of Santa Cilia is signposted from the road between Bastaras and Panzano. Park below the village and walk along the only street, past the church to the village playground where you will see the observatorio. The feeding station is across the valley to the west on a bare patch of ground. If there are no vultures there, scan the more distant cliffs to the left of the feeding site as Lammergeiers regularly roost there and can be seen clearly with a telescope. While we were there, a fresh arrival of food attracted over 100 Griffon Vultures, plus Ravens and a fox but the Lammergeiers were 'only' seen flying over or perched distantly. 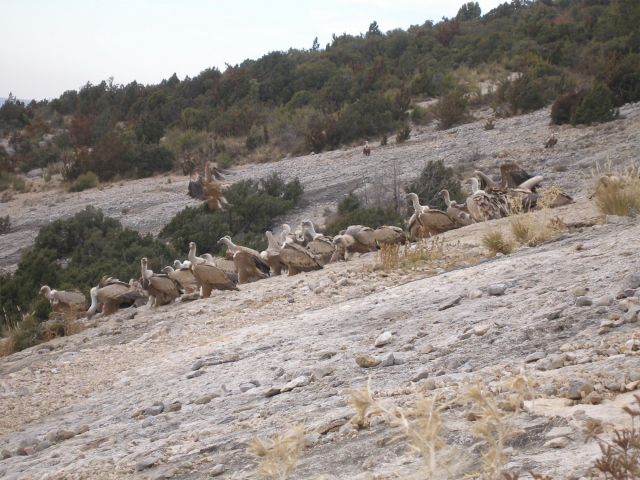 Griffon Vultures, Santa Cilia, Spain. The Griffons come for the food as soon as it is put down. The Lammergeiers come for the bones later (photo: Liz Hall).

I'd like to thank Nuria Grasa Sancho and Paco Bescos Claver for their help during my stay in this area and for providing information about what we didn't manage to see ourselves during the short visit. I should also acknowledge that the feeding station at Santa Cilia has been set up by a non-profit association called 'Fondo Amigos del Buitre' (Friends of Vultures Fund); further details (in Spanish) can be found on their website: fondoamigosdelbuitre.org