Visible Migration Through The Peak District

During the autumn, most 'normal' birders turn their attention to the coast, keeping their fingers crossed for easterly winds and big 'falls' of migrants, which hopefully will include a disorientated rarity from some far-flung point of the compass.

Birding inland at this time can seem pretty tame by comparison, the relative dearth of scarce migrants forcing even the most optimistic birder to reach for the Prozac, as well as their 'scope'. However, it needn't be all doom and gloom as you scroll down the latest BirdGuides update, foaming at the mouth over what's just turned up on the east coast; you might just be overlooking a spectacular migration of a different kind – right on your doorstep, which you can enjoy all to yourself, and which doesn't involve the inconvenience of getting sand in your 'bins' or having to look through huge crowds of people with ridiculously big heads.

In my home city of Sheffield in South Yorkshire for example, an agonising 70 miles from the nearest patch of Sea Buckthorn, a few sad individuals who (under the Mental Health Act) shall remain nameless, have managed to resist the lure of the coast and have instead spent their autumn nights dreaming of different conditions: of low, overcast skies, with light south-westerly winds and flocks of 'exciting' migrants, such as Woodpigeons, Meadow Pipits, and Linnets.

The Sheffield area is situated on the boundary of upland and lowland Britain, and seemingly far removed from the migration associated with coastal headlands and observatories. And yet, its close proximity to the southern Pennines means that each autumn, literally hundreds of thousands of migrants end up channelled through river valleys and along moorland edges, as they search for a safe route across this inhospitable natural barrier.

The species involved may not be rare or require detailed descriptions of their median primary coverts, but on 'big' days, the sheer visual spectacle of the numbers involved soon gets the adrenalin pumping - if only at the thought of what might be tagging along. Whilst you are out scanning the horizon, you also increase your chances of picking up something else of interest: unusual wildfowl, waders, gulls and raptors for example. But best of all, everything you discover is largely your own, with no need for phone lines, grid references and bleeping pagers. The other attraction is that every year is different, so your observations actually have some purpose in identifying the patterns of movement for different species, as well as the short- and long-term trends in the numbers of British and Continental migrants. 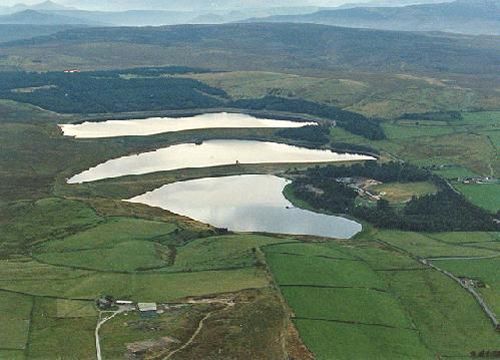 In the Sheffield area, the best sites tend to be situated on the moorland fringe overlooking the City. It is here that ridges of high land associated with the area's many river valleys run from the high ground of the Peak District in the north and west, into the heart of the City to the south and east. My local patch is a place called Redmires (SK2585), a series of three bleak moorland reservoirs five miles west of Sheffield, perched high on the Peak District moors over 1050 feet above sea level. Despite its barren appearance, Redmires has been reasonably well watched for nearly 30 years. Pioneering observations were by a young, afro-haired birder (it was the 70s remember) called Keith Clarkson, who discovered that the site was ideally situated for watching visible migration. The systematic recording of migrants, including daily watches in 1981 (and again in 1988), inspired a whole generation of local birders, many of whom went on to discover other, even better, sites elsewhere in the area.

Diurnal migration can begin as early as mid-summer, with the first returning Sand Martins usually recorded on the uplands during the first week of July. Movement is sporadic during July-August, with any significant passage usually restricted to Swifts, hirundines, and small numbers of Grey Wagtails and Yellow Wagtails. The notable exception from mid-August, particularly on high pressure days, is the southerly movement of Tree Pipits, probably my favourite species on migration watches. Although generally recorded in just ones and twos, they have a habit of moving through so high that their presence is often only revealed by that wonderful, buzzing 'spihzzz' as they pass overhead. 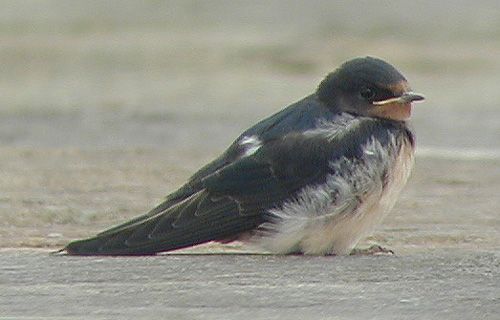 September sees a gradual increase in both the variety and numbers of migrants. The early weeks are often characterised by large south-westerly movements of Swallows and House Martins, which can sometimes continue throughout the day. Towards the end of the month, however, things really begin to hot up, with the last week of September and first week of October by far the most exciting period of the whole autumn. It is during this 'window', that the peak movements of Meadow Pipit, Pied Wagtail and Linnet occur, often accompanied by irruptive movements of Siskin and Lesser Redpoll. This also tends to coincide with the first records of returning winter visitors like Fieldfare, Redwing and Brambling, together with other transients such as Rock Pipits, Ring Ouzels and Crossbills.

These mornings are without doubt the most magical of all, with the first couple of hours of daylight often providing everlasting memories. At Redmires, dawn will break to the 'tsip–tsip-tsip' of Meadow Pipits in loose-knit groups overhead; while lower down, you'll hear the twitter of Linnets and the tinkling of Goldfinches, usually more tightly bunched, as they pass through southwards. Gradually, as the sun comes up, you'll start to pick up straggly lines of Chaffinches and maybe a few compact flocks of Siskins heading westwards, the 'tchizzick' from small groups of Pied Wagtails, perhaps the occasional chirping of Skylarks or a 'tsieu' of a Reed Bunting, all moving south-west. On the really big days, perhaps after a spell of poor weather, movements of over 15,000 birds have sometimes been recorded. The variety and numbers involved on these occasions make birding both exciting and exhausting: flocks of birds moving through on one side, calls overhead from the other, and you stuck in the thick of it, running around like Benny Hill desperately trying to count everything! 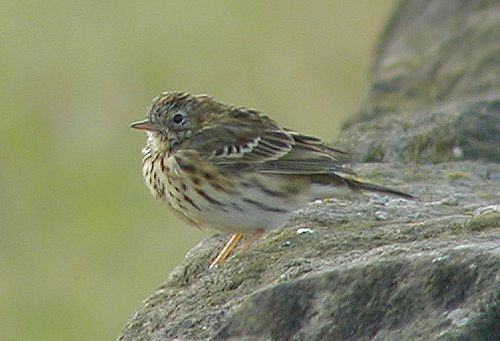 October is the month for spectacular movements of Continental migrants. The month usually begins with a good passage of Chaffinch and Redwing around the end of the first week. This period will generally also see the peak counts of Skylark, Song Thrush, Goldfinch and Reed Bunting. Later in the month, a second peak will occur, often involving a large arrival of Fieldfare, and usually accompanied by Blackbird, Chaffinch, Brambling, Greenfinch and the first significant movement of Woodpigeon and Starling. October is also the best time to pull out the unusual. In Sheffield, Rock Pipits, Snow Buntings and Lapland Buntings are now annually recorded in association with some of these movements, but star finds from the past have included Shore Lark and Richard's Pipit, as well as unusual moorland records of Waxwing, Tree Sparrow, Hawfinch and Corn Bunting. 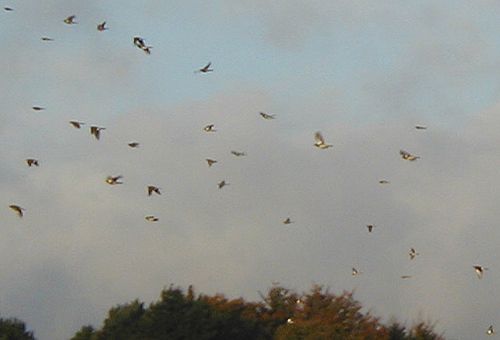 Fieldfares – up to 14,500 have been recorded on a single day (Photo: Richard Hill)

Although November usually sees a gradual reduction in both numbers and diversity, the first week will often provide another highlight in the visible migration calendar. It is during these cold, but wonderfully clear, high pressure days that the skies will fill with the spectacular southerly passage of Woodpigeons and the westerly movement of Fieldfares and Starlings, often in their thousands. 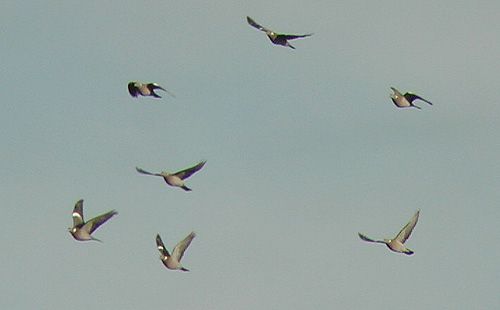 Woodpigeons migrate in their thousands every autumn (Photo: Richard Hill)

These mornings are also characterised by raptors, such as Hen Harrier, Goshawk and Peregrine no doubt attracted by the feast of available prey on offer. My favourite part of these days, however, comes about 90 minutes after dawn, when Pink-footed Geese - which set out from the Lancashire coast - pass east and southeast overhead in their thousands on their way to the Wash. By the third week of November, it's all over and the skies are quiet again for another year, although there is still the chance of migrating wild swans, Water Pipits and both Snow Bunting and Lapland Buntings, which can be recorded right up to the month end. 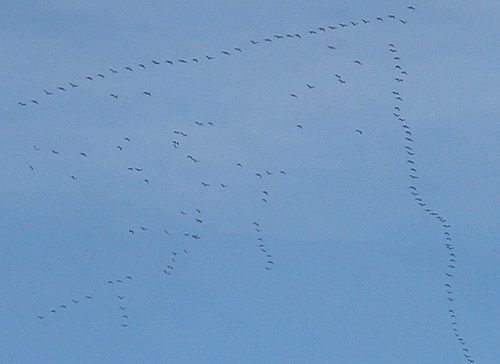 Observations in the past 25 years in and around the Sheffield area have revealed that over 100,000 migrants pass through these sites each year, including annual maxima of 60,000 Woodpigeons, 40,000 Fieldfares, 25,000 Starlings, 30,000 Redwings and 25,000 Meadow Pipits. These annual variations are thought to be attributable to weather systems, breeding success and particularly population changes. It is interesting to note that the declines noted from the national CBC survey for species such as Skylark, Tree Pipit, Starling, House Sparrow, Yellowhammer and Reed Bunting, were all detected at visible migration watchpoints at the same time.

Topography and weather have also been found to be a primary influence. Although traditional migration theory, particularly involving radar, centres upon high-altitude movements into Britain from Continental Europe in response to following, or easterly, winds, our experience inland is that the migrants we record prefer lower altitudes, follow favoured habitats and appear to take advantage of light head winds from between the south and west. Movement is much reduced during periods of easterly winds, prolonged periods of high pressure and fog. Beware of having a lie-in on these days - one foggy morning in November 1995 may have lacked any visible migration, but it did produce a Black-throated Thrush, a somewhat small consolation!

As no self-respecting article should be without a graph or a table, here's a summary of the movement and numbers recorded in the Sheffield area since regular counts began in the mid-1970s to 2000.

Table 1 – Periods of movement and maximum counts of regular diurnal migrants through visible migration watchpoints in the Sheffield area 1976-2000.

So why not find out what's happening in your area? Dust down that Ordnance Survey map, look for a local vantage point and get yourself out 'Vis-Migging'. Like other forms of birding such as seawatching, you'll soon get addicted, become oblivious to the cold and the early starts, and perhaps in the process rewrite the pattern and distribution of your area's birds. Good luck!!

A network of birders is currently being established elsewhere in the north of England and beyond. Anyone interested in visible migration who may wish to contribute information this autumn, please feel free to email rdhill2001@yahoo.com for details.

Acknowledgements: To all the other Sheffield birders who've got involved over the years, particularly Kevin Gould and especially Keith Clarkson - the visible migration 'guru' of South Yorkshire - whose curiosity and enthusiasm inspired a generation of local birders, and who I hold personally responsible for the huge bags under my eyes through lack of sleep.