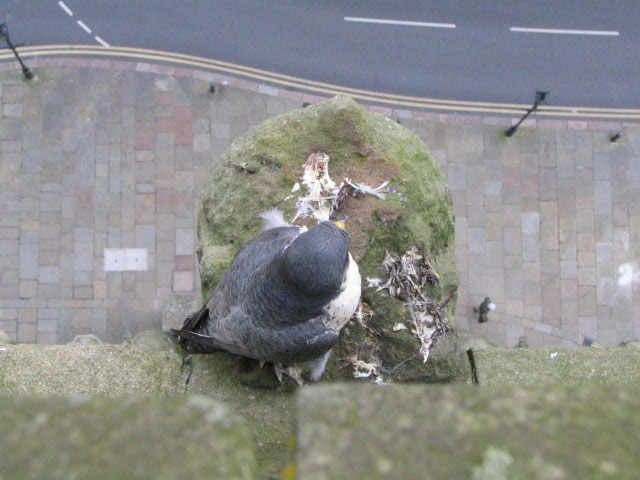 Peregrine Falcon: Looking down on the male, sitting on a gargoyle, with the pavement some 200 feet below (photo: Robert Kilgour).

Last summer, a pair of Peregrine Falcons successfully nested on Derby Cathedral for the first time, thanks to a partnership between Derbyshire Wildlife Trust, Derby Museum and the cathedral staff. A wooden nest platform was provided for them and three young fledged in July.

This year two cameras (fitted with sound and infra-red) have been put on the platform and shortly they will allow everyone to monitor the pair's progress. A diary with video clips is up and running, but live pictures are not quite ready to feed to the internet (the landing page will be www.derby.gov.uk - then type 'peregrines' in the homepage search box).

Webcam views of Peregrine nests are quite commonplace these days, but the Derby cameras also have sound which adds a fascinating new dimension to watching them. An infra-red camera option will enable us to observe (live) prey being brought back after dark, evidence of their ability to use the city's lights round the cathedral to catch passing birds at night. 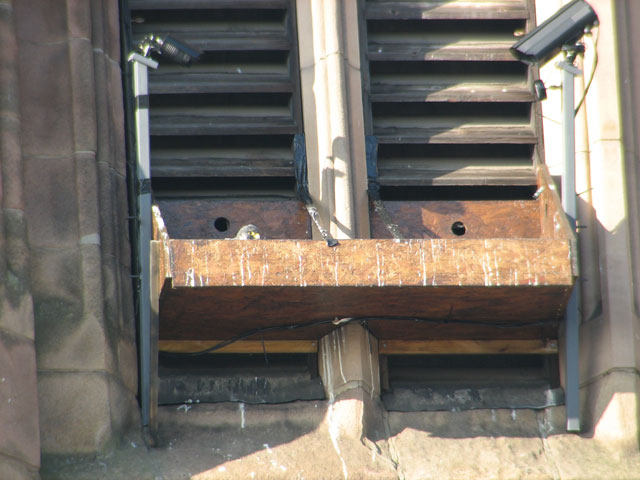 Meanwhile, we have gathered fascinating information about what the birds have been eating. During the autumn and winter of 2005/06, we identified the remains of species you might expect (pigeons, Lapwings, Golden Plover, Woodcock, Fieldfares and Redwings etc.) but also much rarer, or more unexpected, fare: several Jack Snipe, two Quail, a Water Rail, a Great Spotted Woodpecker and even a Waxwing (in a winter when there were plenty about locally)! Many are likely to be caught as they migrate over Derby and the surrounding area at night, illuminated from below by light pollution. 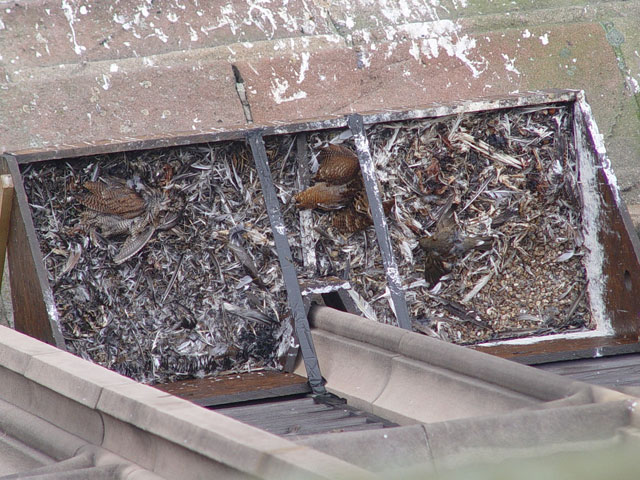 Peregrine Falcon: Looking down on the nest tray in December 2006, with remains of several Woodcock and a Redwing. Since then the amassed remains have been removed and the gravel on which eggs will hopefully be laid has been re-exposed (photo: Nick Moyes).

This winter, long after the main autumn migration period, we have found evidence of essentially coastal waders such as Dunlin, Knot, Turnstone and even Bar-tailed Godwit. These species, with the exception of Dunlin, are virtually unrecorded on the ground in Derbyshire in midwinter. It seems that the Peregrines are revealing unexpected nocturnal cross-country movements of waders, perhaps responding to changes in weather or food supplies.

Further evidence of wader movements across the Midlands in midwinter came from Coventry Cathedral, where the Peregrines caught (and dropped) an uneaten Knot. Proof of such movements comes from the colour-ringing of Black-tailed Godwits, where one individual was seen at the Cambridgeshire Washes one day, at Marshside Reserve (Lancs) the next and back in Cambridgeshire the following day!

A fuller analysis of the diet of urban Peregrines is being collected by Ed Drewitt at Bristol's City Museum and Art Gallery. So far in excess of 90 species have been recorded nationwide, including such rarities as Black-necked Grebe, Roseate Tern, Little Bittern, Stone Curlew and Avocet to name but five. Also of interest is the fact that Peregrines are catching tiny prey such as Goldcrests and unlikely species such as Kingfishers and Common Swifts.

These birds have no other ledges to choose from so it is a fairly safe bet that we can expect eggs before too long, maybe even before the end of the month. 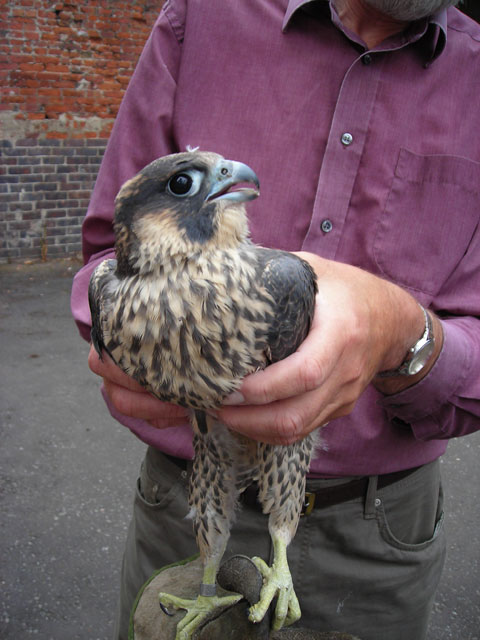 Peregrine Falcon: One of last year's fledglings had to be rescued from a car park nearby and be released on the top of the tower. Maiden flights don't always work out! (photo: Kath Patrick).