When I mentioned that I was going to Herzegovina, the reaction from most of my friends was: “Where’s that?” Herzegovina represents the southern portion of Bosnia and Herzegovina, one of the recently created countries that came into being after the break-up of Yugoslavia. Despite its troubled start it is now a friendly and welcoming destination.

I was met at Dubrovnik airport by Denis Bohm of Wild Herzegovina, guide for our small group for the next five days. The drive from the airport took us up into the rugged coastal mountains, and here we made our first stop to sample the wildlife. Among the roadside crags we soon located a pair of Western Rock Nuthatches, complete with their rather House Martin-like mud nest, built safely under a projection on the rock face. One of the star birds of these barren rocky slopes is Rock Partridge, but this notoriously difficult species would not fall quite so easily. Black-eared Wheatears were common in the hills, though, with both dark- and light-throated forms represented. 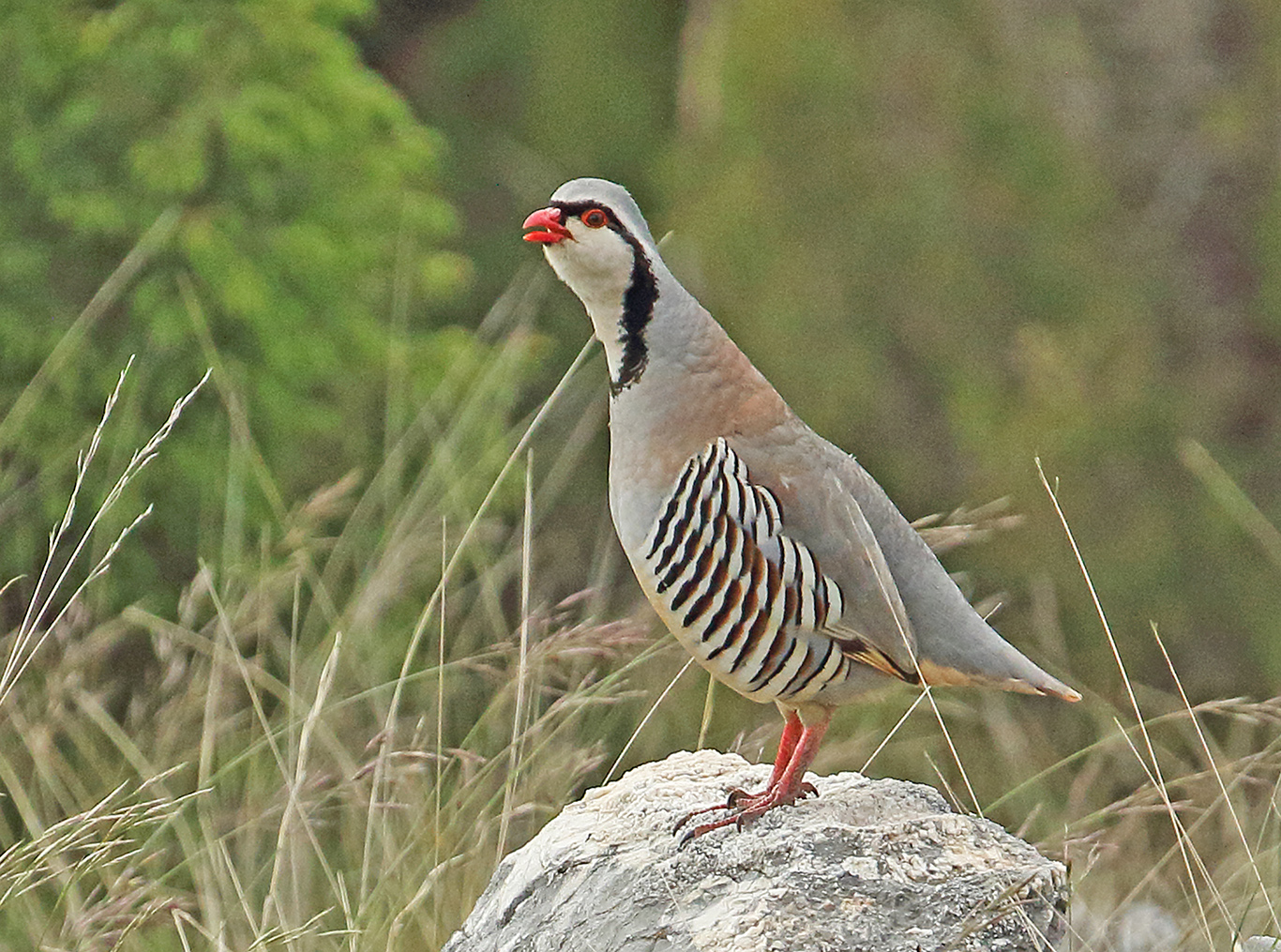 Rock Partridge is one of the region’s star species. Usually hard to see, this fine male posed for some stunning photos (all photos by Neil Bowman).

At this point Denis mentioned that a nearby abandoned railway tunnel held a substantial colony of roosting bats, and we decided that this was too good an opportunity to miss. The adventurous among the group, torches in hand, headed into the tunnel. After about 50 metres, we found some large groups of Greater Mouse-eared Bats squeezed into holes in the limestone ceiling. This is a very rare bat in Britain, and it was stunning to see such large numbers. Back at the tunnel entrance these mammalian distractions were countered by the aerial antics of Eurasian Crag Martin, Red-rumped Swallow and Alpine Swift. 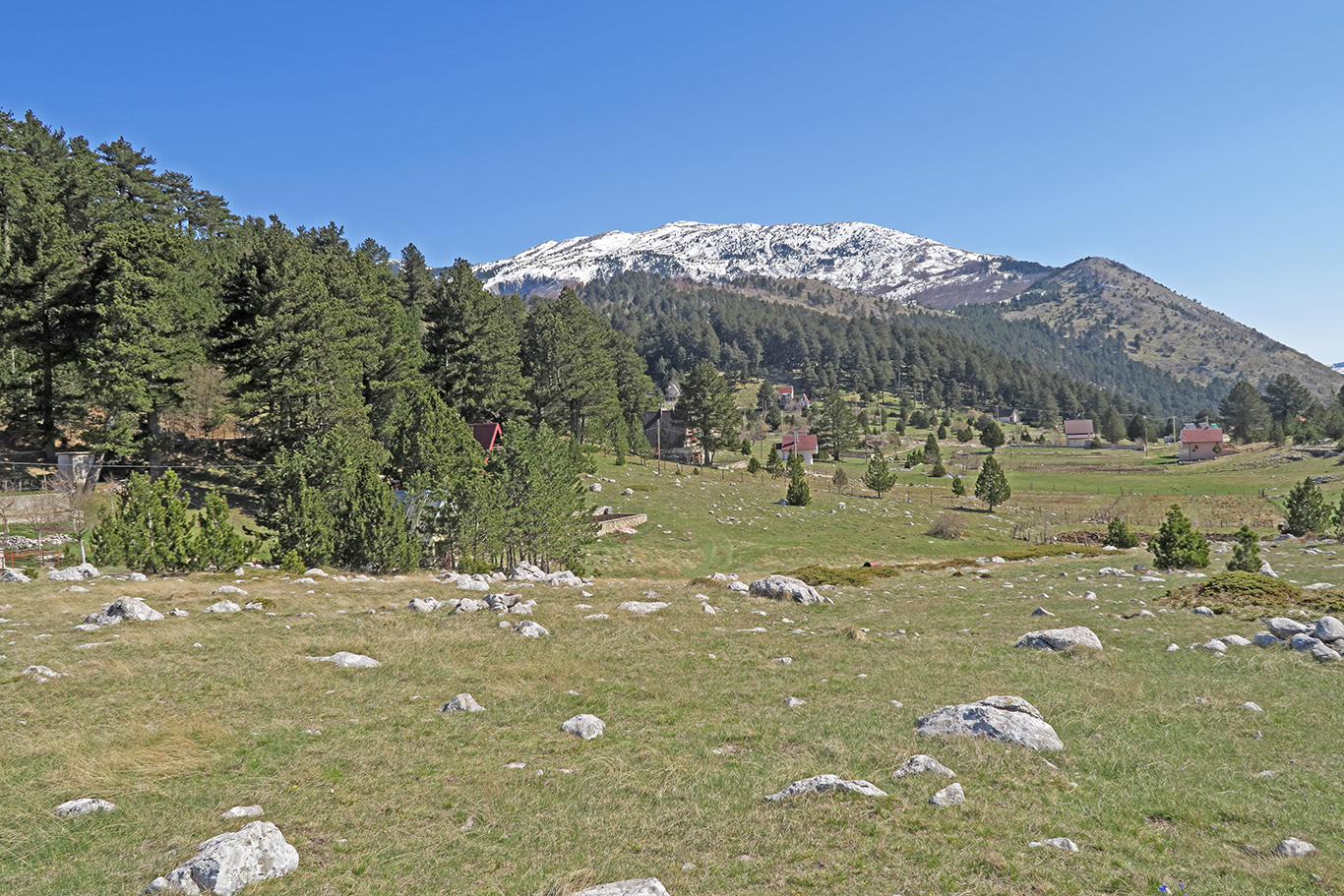 The scenic Prenj mountains are home to a variety of alpine species.

We were based in the ancient city of Mostar, where we dined each evening overlooking the River Neretva. Here Dipper, Grey Wagtail and an assortment of bats put on a splendid sideshow. Twice we took a walk through the city to a local churchyard for some after-dinner owling. This produced superb views of Eurasian Scops Owl perched on a rooftop, as well as calls from a close-by Barn Owl. 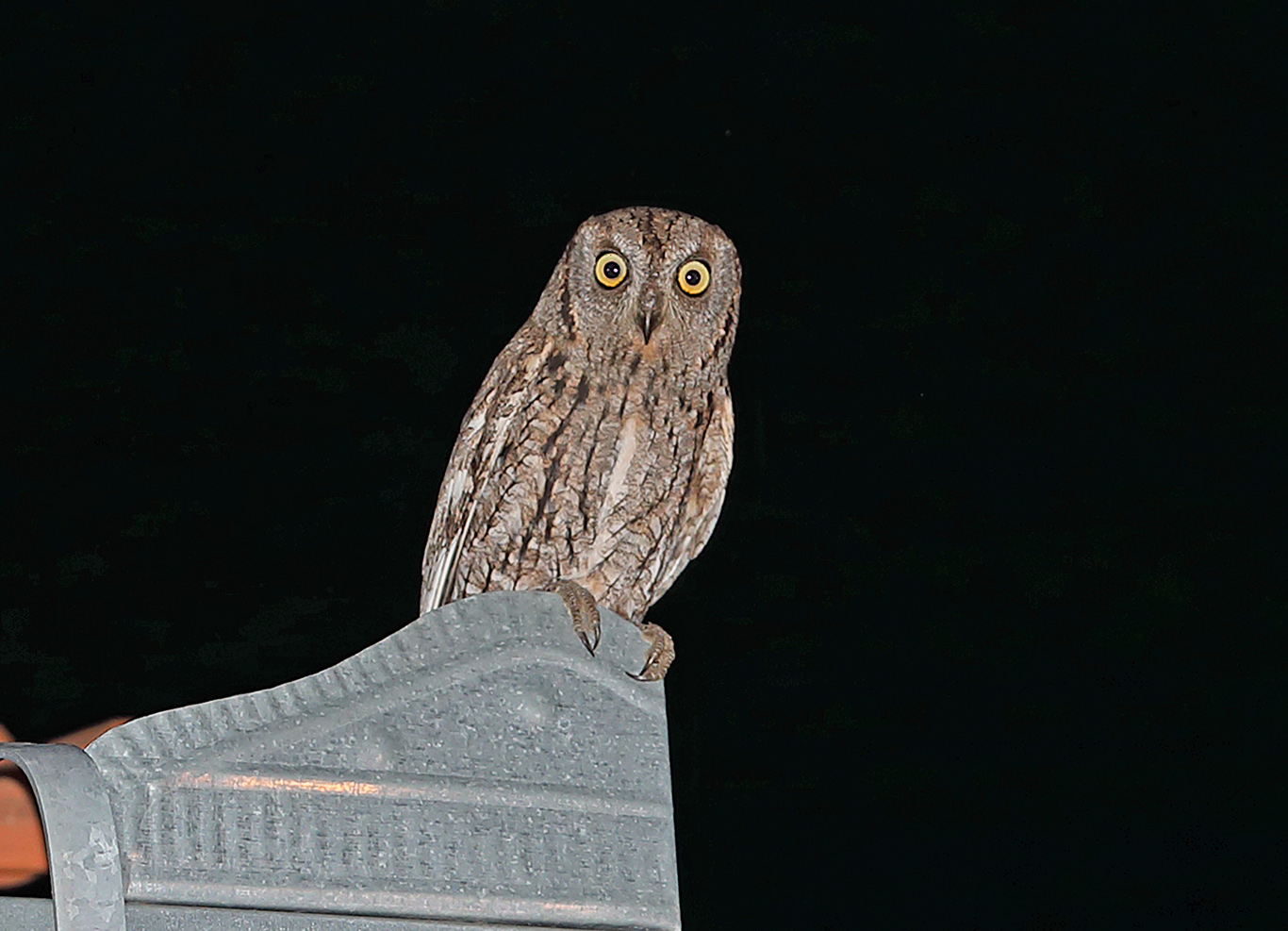 Eurasian Scops Owl (above left) was seen perched on the roofs of buildings in the capital city, Mostar.

The next morning dawned with a clear blue sky and light winds. With such superb conditions, a trip to the high mountains was planned. However, our day started with a visit to an abandoned grain store on the outskirts of Mostar, where a flock of Alpine Choughs had moved in for the winter and was yet to return to the high pastures. The choughs duly performed, entertaining us as they flew around the urban landscape.

Tearing ourselves away from this playful spectacle, we headed up into the scenic Prenj mountains, in summer home to the very Alpine corvids we had just been watching. Here, against a stunning backdrop of snow-covered peaks, alpine pasture and scattered woodland, a different cast of birds was set to captivate us.

At this altitude Eurasian Nuthatches replaced yesterday’s Western Rock Nuthatches, and were joined in the wooded areas by some very cheeky Crested Tits, as well as that south-east European speciality, Sombre Tit. This last species really put on a show when it flew over us and proceeded to sing from an overhead power-line. On a more open mountainside, a splendid male Rock Bunting sang from a pine tree, accompanied by the jingling song of a European Serin. 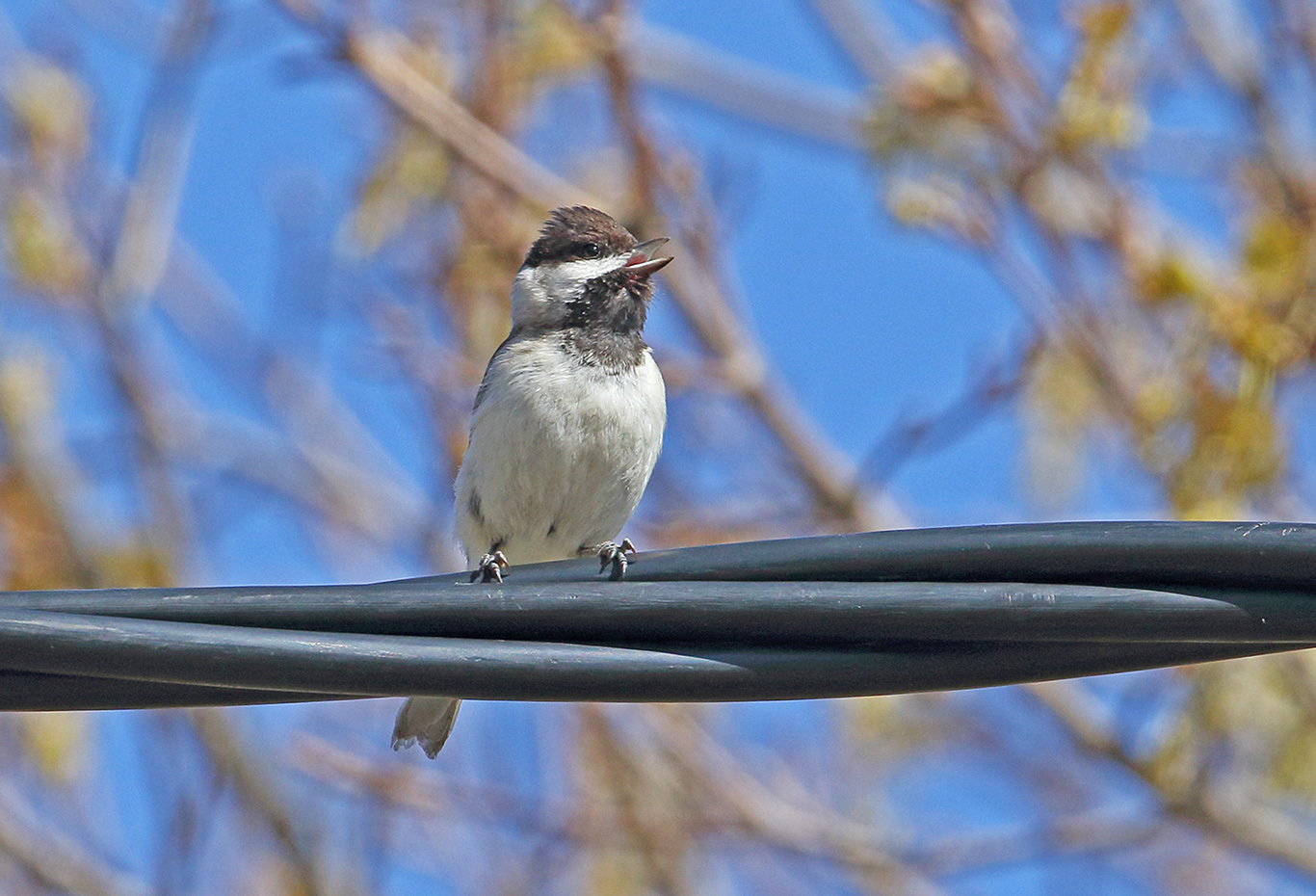 Sombre Tit was one of the many highlights of this trip.

Our second morning was to find us at woodpecker central. This site was an area of largely open woodland on the banks of the Buna River. This spot can regularly hold up to six species of woodpecker, including Wryneck, Syrian Woodpecker and, the one I see most rarely these days, Lesser Spotted. We managed five species – a great hit rate – together with a nice Hoopoe. Since our visit Denis has contacted me to say that he has found a nest site there occupied by a mixed pair of Syrian and Great Spotted Woodpeckers, which surprisingly is not as uncommon as I would have thought.

The only way is up

From this lowland start the only way was up, and up we went on to the Podvelezje plateau. The big attraction here was to finally get a glimpse of the elusive Rock Partridge. Although a close relative of Chukar and Red-legged and Barbary Partridges, Rock Partridge is by far the hardest to see. I well remember my first visit to the Balkans in the late ’80s to Montenegro, and trying unsuccessfully on a number of occasions to track down this difficult species; it was not until a few years later, in northern Greece, that I finally laid the ghost to rest.

Our first stop was at a valley high in the hills. Here we could hear the partridge, but it could not even be glimpsed. The valley, however, was a lovely spot, buzzing with birdlife. A pair of Western Rock Nuthatches were conspicuously holding territory, with the male entertaining us by singing, not from a rock, but instead perched in a tree. Then a scratchy song of a Sylvia warbler drew our attention to a big and bold male Eastern Orphean Warbler, another species not always easy to see, but this one decided to put on a grand show singing away from the top of nearby bushes. 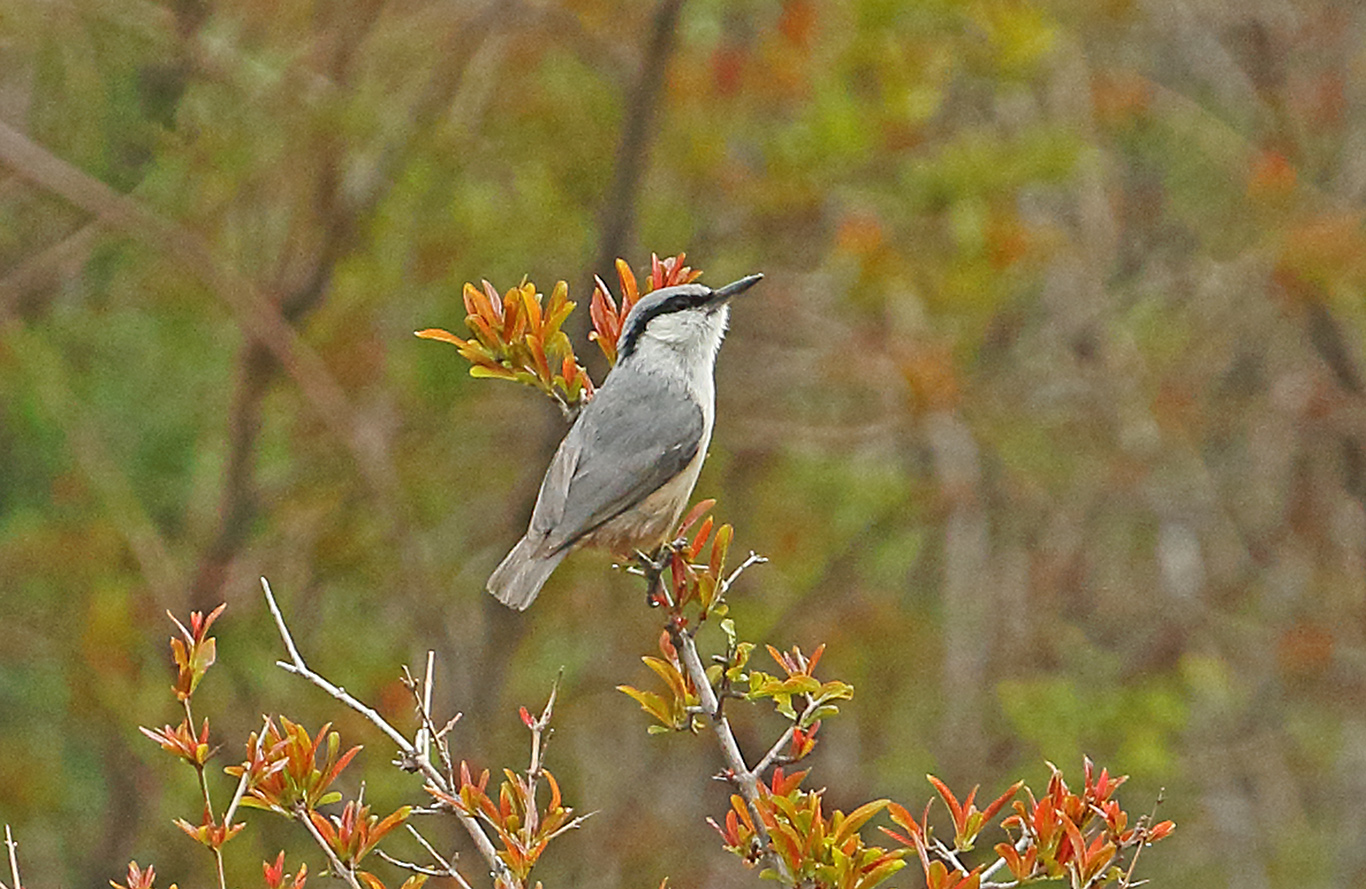 This male Western Rock Nuthatch entertained the group by singing from a tree on the Podvelezje plateau just outside Mostar.

The partridge quest continued until late in the day, when we were gathered on top of an exposed ridge. Finally a pair was sighted way down below, moving through and soon vanishing into the low vegetation. Feeling pleased with ourselves, we headed down the mountain only to find another partridge casually crossing the road in front of our van. A quick stop and we were to meet one Rock Partridge that had not read the book. For the next 10 minutes or so it entertained us, moving around, perching on a number of rocks and scree slopes and even crossing the road twice more.

Day four of this action-packed tour was to include a visit to Croatia’s Dalmatian coast, although our first stop after leaving Mostar was at the Mostarsko Blato karst field. This extensive wetland was unusually dry; nevertheless there were still numbers of waders along the streams and open lakes. It was not the waders that captured our attention, though, but the numbers of raptors, particularly the several dozen gorgeous Red-footed Falcons that were either hunting over the fields or just resting on the low bushes or even on the unmetalled track. Throw a number of Montagu’s Harriers, including at least one pristine male, into the mix and you have a very happy group of birders.

Next stop was Croatia. We were visiting the delta of the Neretva River. A windy but sunny day produced good numbers of birds, including a very obliging Great Reed Warbler singing in a small reedbed and numbers of waders in the estuary, all set against the backdrop of a beautiful undeveloped coastline.

Our final day started with a visit to what, in my opinion, was one of the finest ornithological spectacles I have experienced. The site in question was a relatively new and active sand quarry near the village of Buna. As soon as we stepped from the van the air was abuzz with birds. We were in the middle of the biggest Sand Martin colony I have ever seen. The quarry face was pockmarked with active nests, and I estimated some 2,000 pairs of birds swarmed around. The whole flock often flew just feet above our heads. When the birds left the cliff-face during ‘dreads’ – a sudden take-off and flight of a flock of birds – they would fly in a tight group, and the noise from their beating wings was quite phenomenal. 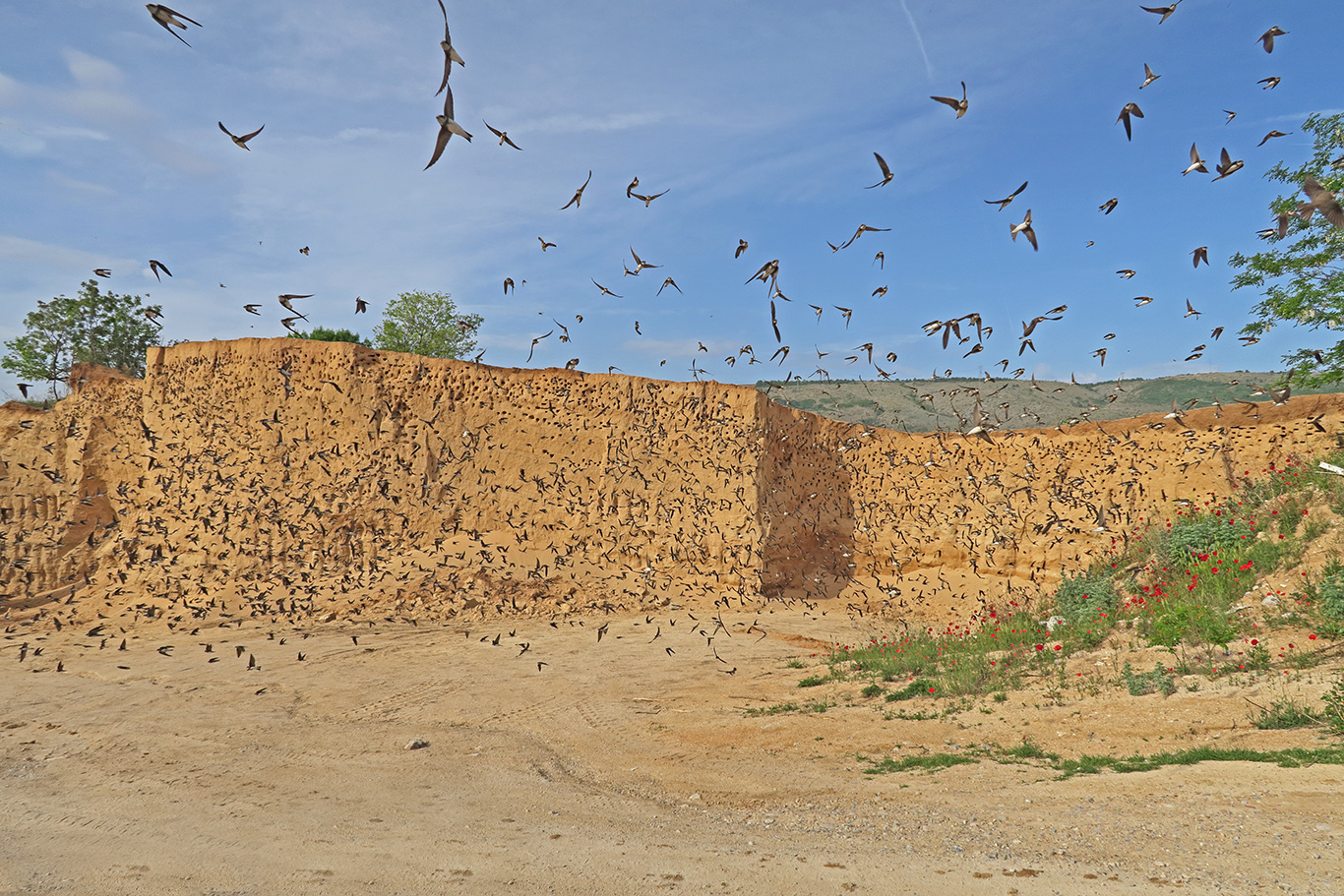 The vast Sand Martin colony near the village of Buna was awash with thousands of birds.

Interestingly, numbers landed around dumped waste in the quarry to collect nesting material, not something I had ever really thought they did. A small number of European Bee-eaters were also breeding at the site. It is not often that I can honestly say that any bird can steal the show from a bee-eater, but on this day the hirundines took it hands down.

Our next port of call was the ancient Dervish monastery in Blagaj village. This is one of those classically beautiful sites, with the village hunkered close at the base of a limestone cliff and its river flowing out of a cave The birds did not disappoint either, with Blue Rock Thrush singing from the cliff, while Crag Martins and Alpine Swifts swooped around the skies and Dipper and Grey Wagtail fed along the bubbling river.

On we went, this time to visit Hutovo Blato marshlands with, at its heart, a large shallow reservoir. Although the delightful Pygmy Cormorants were the stars, there were also good numbers of herons, including Purple and Squacco, Western Cattle Egrets and plenty of Glossy Ibises. Wildfowl included Garganey, Ferruginous Duck and Red-crested Pochard, while Whiskered Terns danced over the water. There was also a good range of wader species, with the best spectacle being provided by a flock of several hundred Ruff which swirled around right in front of us on one occasion.

As we returned to the airport for our flights home, the skies opened up and we saw our first rain, but even then the birds kept coming, with our first Common Swifts and a Woodchat Shrike as roadside birds.

Herzegovina may be little known in western Europe, but for a visiting birder it has one hell of a lot to give, and all set in a stunningly beautiful and affordable country.

Birdwatch travelled as a guest of Wild Herzegovina.

Collins Bird Guide by Lars Svensson, Killian Mullarney and Dan Zetterström (HarperCollins, £19.99) – order for £16.99 from the Birdwatch Bookshop at bit.ly/bw301Collins.

For an illustrated list of birds recorded in Bosnia and Herzegovina: www.world-birds.com/birds/a/bosnia-and-herzegovina. 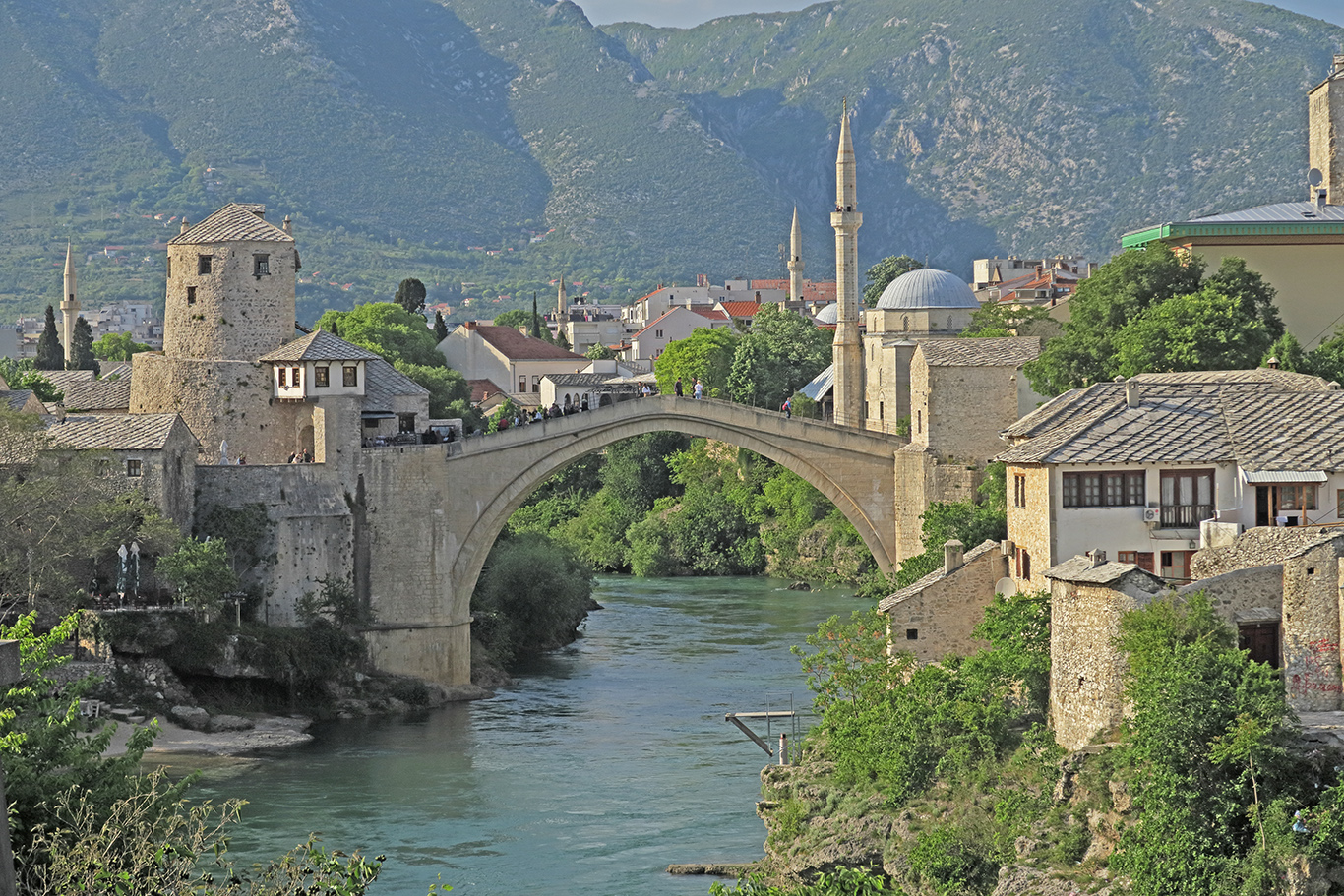 The rebuilt 16th-century Ottoman bridge of Stari Most in Mostar is also a significant cultural tourist attraction.