Did you know that female birds seem to have some capacity to control the sex of their chicks? This might seem unlikely for the following reason. Birds have sex chromosomes, every male with two copies of the Z chromosome and every female with a single Z and a W chromosome. Cells in the female's ovary undergo a halfing division, called meiosis, that produces eggs with just one set of chromosomes, and each egg cell receives either a Z or a W which, after fertilisation, will produce respectively either a male or a female chick. Thus, sex determination in birds is supposedly chromosomal and, because the allocation of Z and W is random, the expected result is a 50:50 ratio of males and females in the population. 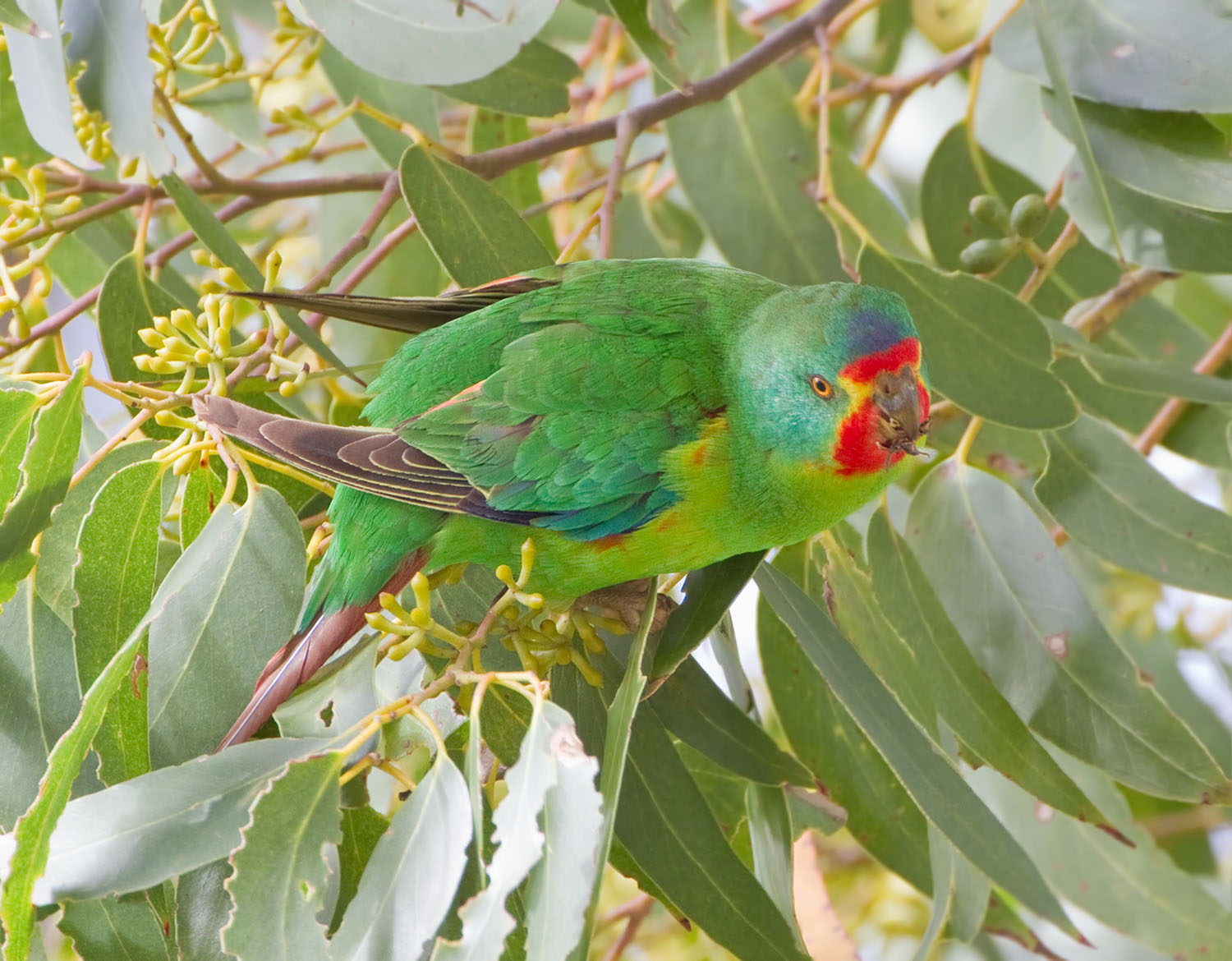 Despite these expectations, there are scientific demonstrations of sex ratio biases strongly pointing to the capacity of female birds to influence the outcome of meiosis in eggs developing in the ovary. For example, it has been shown that there are clear associations between ovulation order and sex ratio of Zebra Finch eggs, and that the sex ratio can be modified by experimentally varying food availability. There is also some evidence that a female, by controlling hormones, can bias the sex ratio. But why would a female bird manipulate the sex of her chicks? Well, the prevailing idea is that she is optimising the likelihood of her offspring mating and rearing young, hence ensuring the continuation of her genes into future generations. In fact, male-biased adult sex ratios are the norm in birds, but most avian species still remain socially monogamous.

Parrots are not exempt from sex ratio bias, and one particularly important case has recently been reported for the Critically Endangered Swift Parrot. Nomadic in relation to food supply, the wild population of Swift Parrot disperses across south-east continental Australia in the austral winter, each year migrating south to breed in Tasmania. Breeding occurs along the eastern seaboard of Tasmania, and two smaller islands (Bruny and Maria) close to its east coast. Swift Parrots require overlap of transitory nectar food resources (flowering Eucalyptus globulus and E ovata trees) and nesting habitat (tree cavities in old growth forest) for successful breeding. Nesting may occur anywhere in eastern Tasmania where an appropriate combination of habitats occurs each year. However, in any given breeding season, only a fraction of the broader breeding range is occupied depending on where food is available. 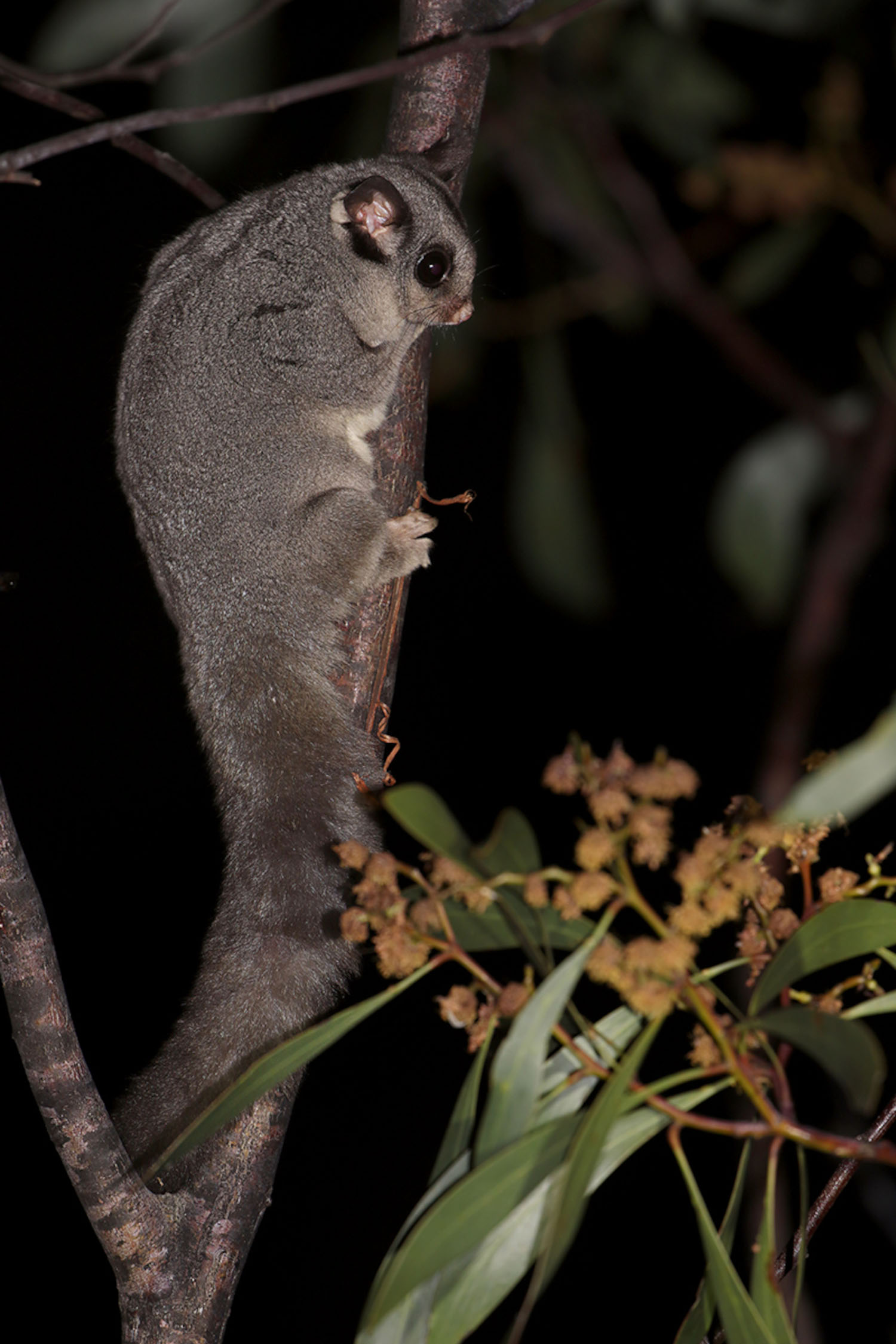 The Swift Parrot population is in rapid decline, and in 2011 Professor Robert Heinsohn of the Fenner School of Environment and Society, Australian National University, started an in-depth research project, suppported by the Loro Parque Fundación, on the ecology of Swift Parrots and ways to arrest the drop. The project reveals that the worst threats are during the breeding season in Tasmania, including unsustainable forestry policies and practices which negatively impact the preferred habitat and nesting trees of Swift Parrots. Furthermore, there is a major threat from introduced Sugar Gliders, a possum which predates eggs, chicks and, especially, adult females within the nesting cavities at night. Professor Heinsohn's team have calculated that the current population size of Swift Parrot could be below 300 individuals. Information generated by the project is being used to pressue for the adoption of sustainable forestry policy and practice in Tasmania. The research team is also using different methods to try to increase the breeding success of Swift Parrot and reduce the predation threat.

As part of the overall ecological and reproductive studies, over a period of seven years Professor Heinsohn and his team examined the sex ratio of 501 nestlings from 161 broods of Swift Parrots breeding at eight sites. These sites were spread across areas on mainland Tasmania with either high or low levels of predation by Sugar Gliders, and on Bruny Island where the possums are absent. The results are intriguing. Swift Parrots breed once a year, with an average clutch of four eggs. Given that the female Swift Parrot starts incubating from the first egg, the order of laying is reflected in the order of hatching. The research shows that chicks which hatch earlier in the same clutch have a better body condition at the fledging stage, giving them a head start in life. In fact, this is a widespread phenomenon in birds, but has a particular significance for Swift Parrots. 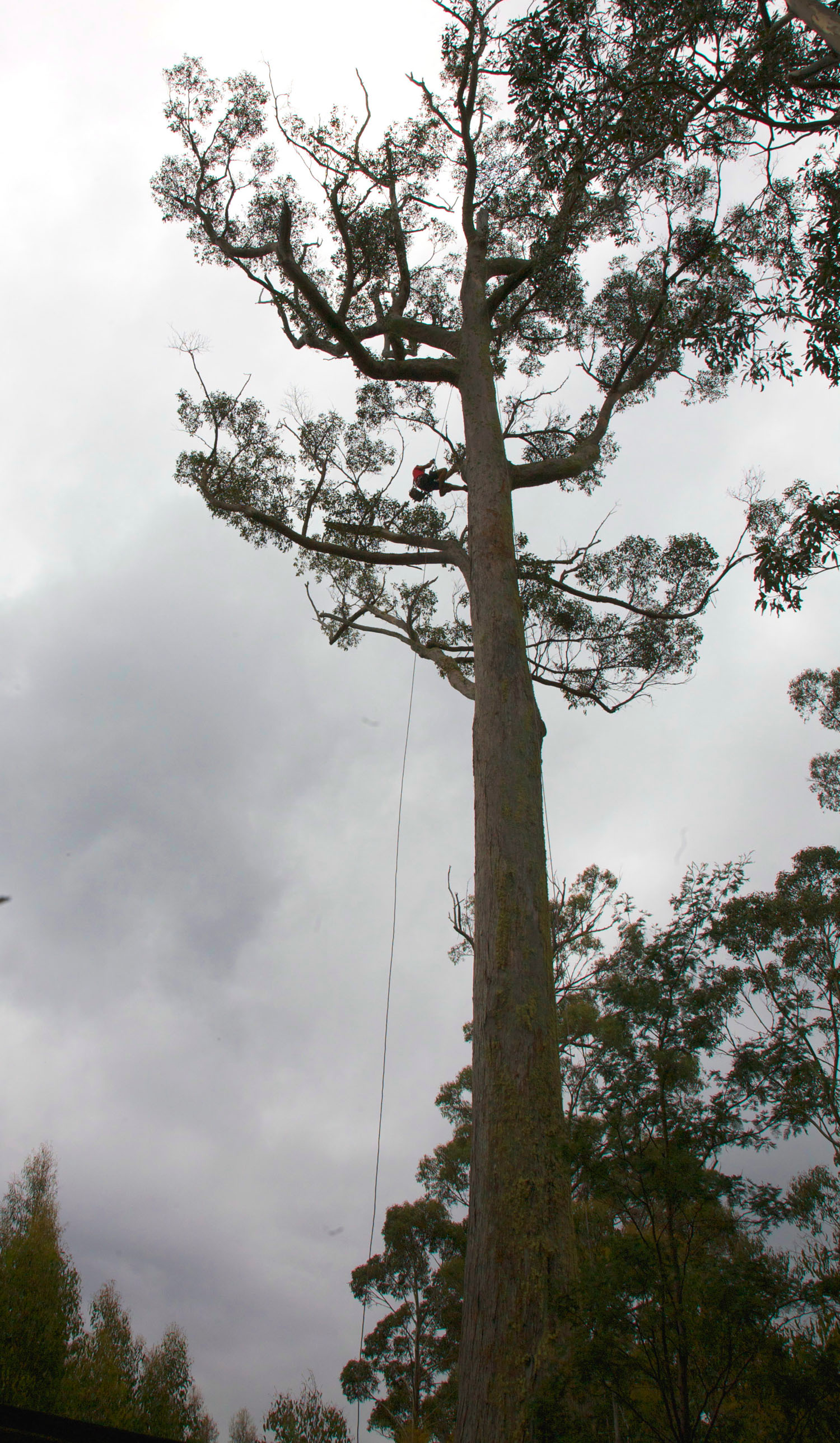 The research team then examined the sex ratio at birth (Birth Sex Ratio – BSR), as expressed by the proportion of male offspring, from eggs according to the order in which they were laid in a clutch. They simultaneously considered the possible effect on the BSR of the intensity of Sugar Glider predation on nesting adult females. They discovered that in low predation areas there is no significant difference in the BSR of first and second-laid eggs from eggs later in the egg-laying sequence. By contrast, in high predation areas the first and second-laid eggs produce a significantly higher proportion of male than later eggs. They also found that in areas with more intense predation on nesting adult females, the difference in the proportion of males between early hatched (first and second) and late hatched (third or later) nestlings is bigger. 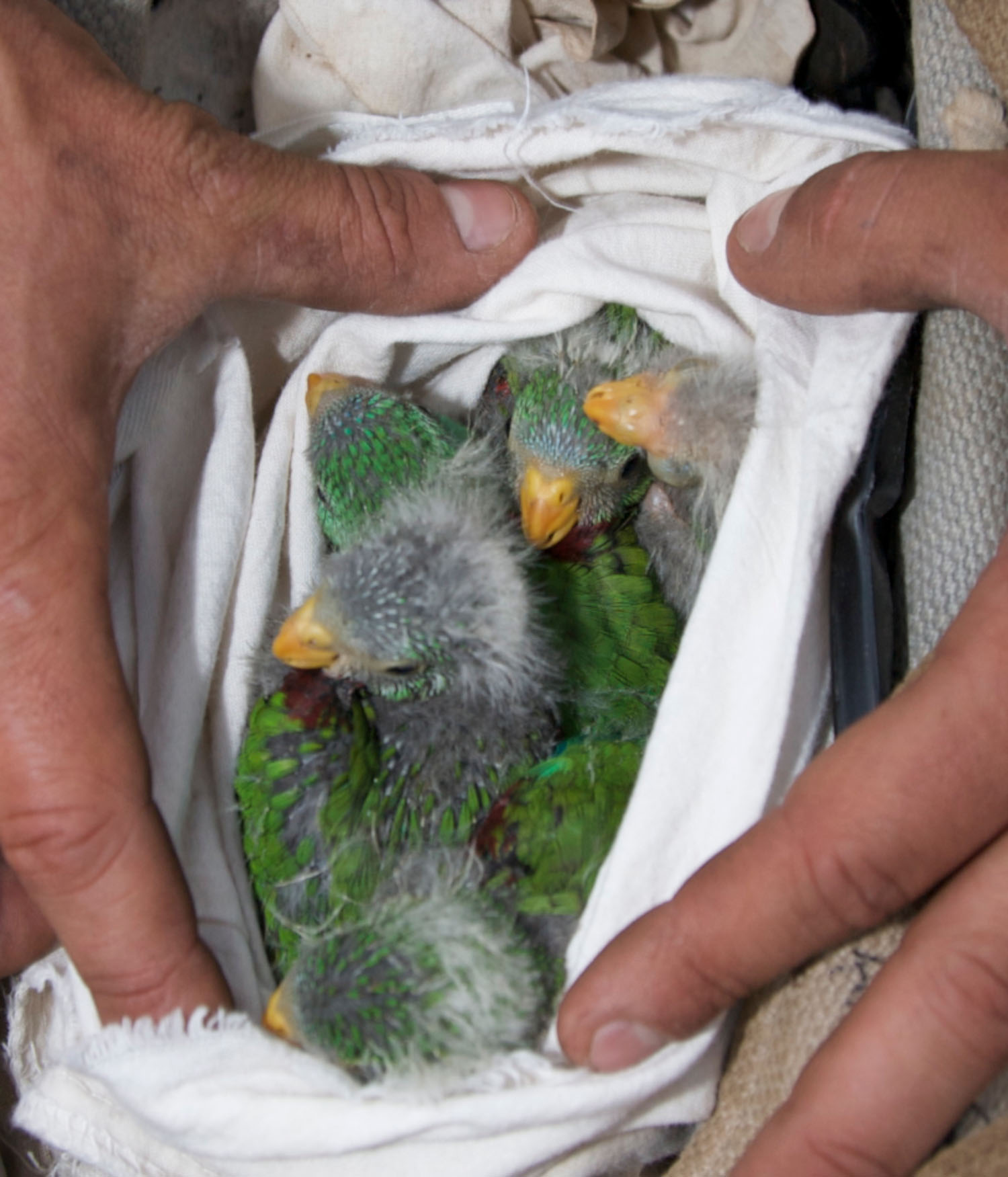 A brood of five Swift Parrots. How many are males? (Dejan Stojanovic)

What does all this mean? Well, based on real data the researchers developed models which postulate that early hatched males have a competitive advantage over later-hatched males, but for this advantage to be realised there have to be fewer females in the population than males. Conversely, with no shortage of females all males will be able to mate even if some are less competitive. And where females never suffer higher mortality than males, on average little selection to adjust sex ratios is expected. In contrast, the results show that high mortality of females due to heavy predation by Sugar Gliders does coincide convincingly with the production of more males, in better condition to survive and compete. The researchers contend this demonstrates that flexible sex allocation has evolved under the selection pressure of extreme sex-biased mortality in Swift Parrots, and appears to have done so surprisingly quickly.

Unfortunately, the study confirms that there is no response to heightened female mortality which involves the overproduction of females, even though that would be desirable to help slow the dramatic decline of the Swift Parrot population.