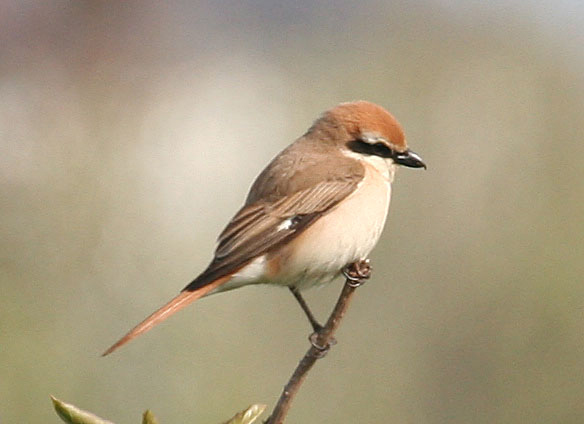 A male Turkestan Shrike (Lanius (isabellinus) phoenicuroides) at Whitburn Coastal Park, Durham on 14 May gave many quick-reacting northeast birders a first chance to see a male of this stunning species/race. Unfortunately it didn't find Whitburn to its liking and it moved north through the area within 2 hours. 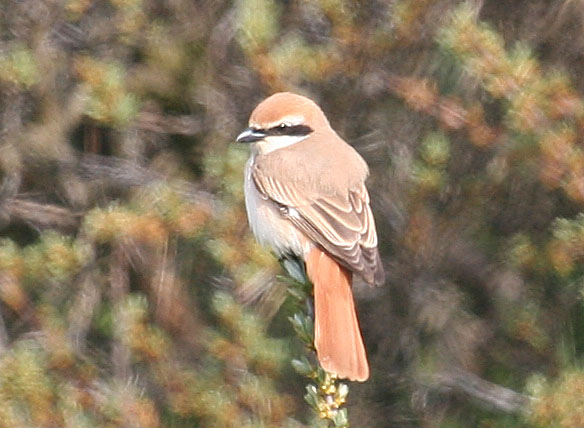 Paul Hindess gives us his account of its discovery.

"On Sunday 14th May, I decided to go to Whitburn Observatory for an early morning seawatch as usual, even though the winds didn't look promising. I slept in so didn't make it for 6am as expected but arrived at 07.10. Unfortunately there was little cloud and the bright sun made viewing difficult. I had just a few Gannets and auks past and at 07.15 looked up and noticed a bird sitting on the firing range warning sign only 5–6 metres away from the Observatory. I just got on the bird with my bins when it was flushed by a dog walker and flew north, but appeared to go behind the Observatory into the country park. From the brief view I'd had of the bird, I knew it was a shrike and had noticed a black mask.

I immediately thought 'mid May, Red backed Shrike!' I dashed out of the Observatory and managed to relocate the bird with binoculars in the distance and rang the sighting into Rare Bird Alert. When I looked at the bird for the first time through my telescope, it was sitting on brambles with its back to me with a lot of heat haze. But I could see it had an obvious red tail, and was surely something more interesting than a Red backed Shrike — I suspected it was an Isabelline Shrike. As no other birders had arrived yet, I decided to go back to my car and get my video camera in case the bird moved on. I dashed back, relocated the bird and started to video it just as the first birder arrived (Ross Ahmed). I rang Rare Bird Alert and described the features of the bird and after ruling out Brown Shrike, we agreed it was an Isabelline. He suggested from my description that it was the phoenicuroides race and news was put out as a probable Turkestan Shrike at 08.10. We had excellent views of the bird in the following 45 minutes, but it would not settle and continued to move north through the Country Park before being lost just after 09.00." 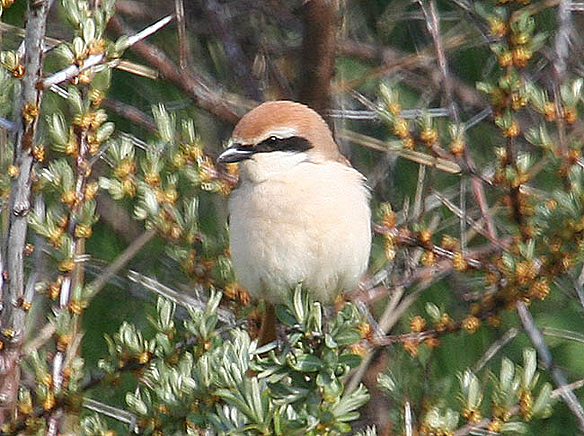 There are 3 recognised forms of Isabelline Shrike: Turkestan Shrike (L. i. phoenicuroides), Daurian Shrike (L. i. isabellinus) and Chinese Shrike (incorporating L. i. arenarius and L. i. tsaidamensis). The last-named form is a short-distance migrant and has not occurred in Britain. Although some authorities have split these three forms (e.g. the Dutch, Sangster 1998), there is apparent hybridisation where ranges overlap and the BOURC choose to play it safe and retain single species status at present.

Racial separation of Isabelline Shrikes is notoriously difficult in most 1st-year birds, but adult males are much more distinctive. The main features that enabled the Whitburn bird to be identified as a Turkestan Shrike are:

There have been about 68 records of Isabelline Shrike in Britain up to the end of 2005, the majority of which have been in autumn. There have been just 6 non-autumn birds, which are detailed below: 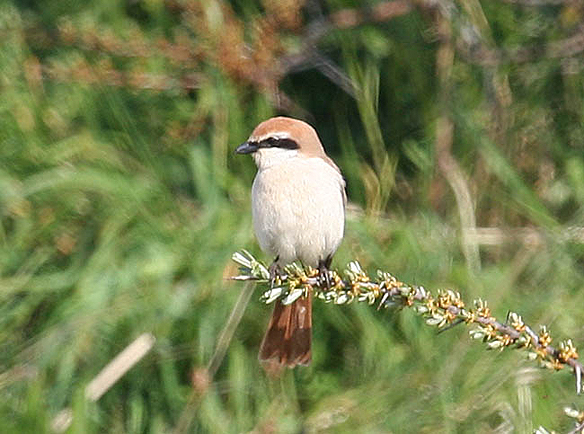 It has been suggested that Daurian Shrike is the commoner of the two forms that have made it to Britain, and that perhaps as few as 12 Turkestan Shrikes have occurred (Chown 2003). This is only a possible status guide, as the confusion over racial field characters in autumn may cloud the real picture. However, examination of the many excellent photos of recent autumn individuals does point to many of them being 'isabellinus' (Small 2000).

The shrike arrived during an interesting weather system that also brought a Calandra Lark to the Isle of May. Curiously, very few common migrants were detected on the Durham coast at this time, a theme that seems to be almost the norm in recent springs. But most local birders would agree that the shrike more than made up for the lack of Redstarts, Wheatears and Whinchats! 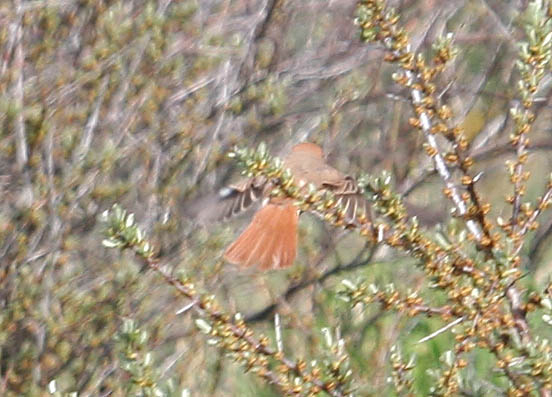