Ruby-throated Hummingbirds are capable of flying more than 1,300 miles without a break, according to a new paper.

Research published in The Auk: Ornithological Advances provides some of the first details of the diminutive species' annual autumn journey from the eastern United States to Central America, showing that this migration peaks in September and that older birds travel ahead of immatures.

Collecting data on birds passing through southern Alabama, Theodore Zenzal of the University of Southern Mississippi and his colleagues found that hummingbirds moved through the area between late August and late October, with older birds arriving earlier and in better condition.

Using a computer program to estimate flight range based on each bird's mass and wingspan, they estimated that the average hummingbird has a flight range of around 1,367 miles. Older birds and males were predicted to be able to travel farther non-stop than younger birds and females. 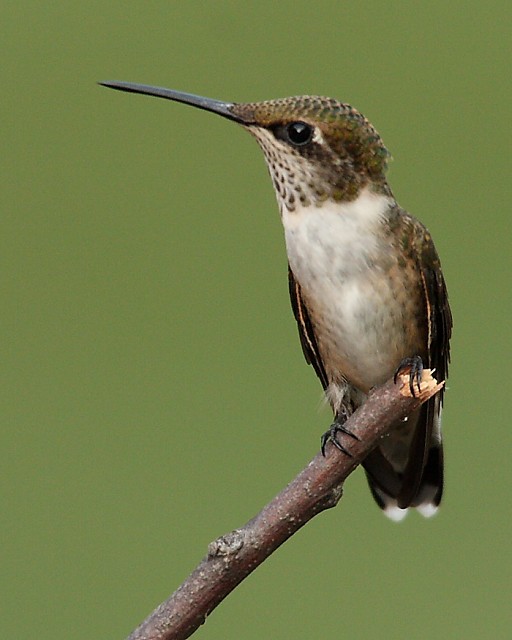 The results suggest that older birds are more experienced and socially dominant, leaving their breeding territories earlier and travelling faster. Whether Ruby-throated Hummingbird migrates across the Gulf of Mexico or around it is still unknown, but the flight ranges researchers calculated mean that most of them would be able to make it across if weather conditions were favourable.

"The most interesting thing, in my opinion, is how some of these birds effectively double their body mass during migration and are still able to perform migratory flights, especially given some of the heftier birds seem to barely make it to a nearby branch after being released," says Zenzal, whose work was funded in part by the National Geographic Society.

The team captured hummingbirds with mist nets at Alabama's Bon Secour National Wildlife Refuge during the autumn migrations of 2010–14, banding and recording data on an amazing 2,729 individuals. Even a visiting documentary crew was charmed by the tiny birds.

"All but one person on the crew was from Europe and most had never seen a hummingbird in real life, so you can imagine how fascinating these birds must have seemed," says Zenzal. "During the course of filming, members of the crew would regularly ask me to place a hummingbird in their hand so they could release it."

"Patterns we previously [knew from] anecdotal observations are documented here with a very large sample size. It's interesting that the young of the year migrate after adults and are quite different in their stop-over phenology. This suggests there are substantial differences between flying south for the first time, as opposed to flying somewhere again as an adult," says UC Riverside's Chris Clark, an expert on hummingbird behaviour. "I think that further research on how young hummingbirds migrate and the decisions they make would be really interesting."