The Violet Copper in Transylvania

The Violet Copper (Lycaena helle) is a butterfly from the subfamily Lycaenidae and is found from the Pyrenees east to Central Asia and as far north as northern Norway. It is small, with a wingspan of about 25mm, and flies from May to July, depending on the location and altitude. It was previously distributed widely across central and northern Europe but nowadays exists only in small and rather localised colonies — the upland wetland and damp forest habitats it prefers are increasingly threatened. 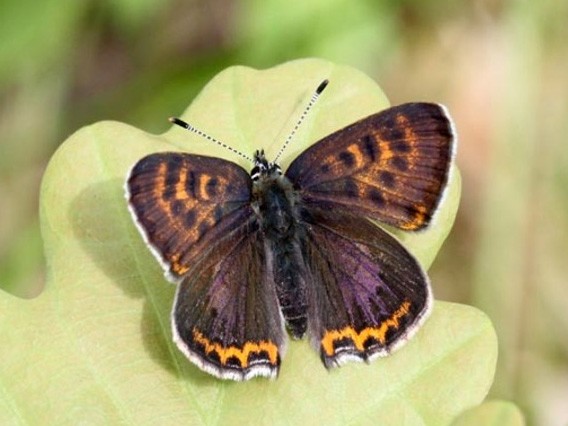 A fresh male cannot really be mistaken for anything else; the upperwings exhibit a blend of deep violet overlay and dark orange markings. The female is slightly larger and paler, with a more distinctive mixture of blue spots and orange areas. Both sexes share a row of obvious white lunules on both underwings — a feature unique among European coppers. 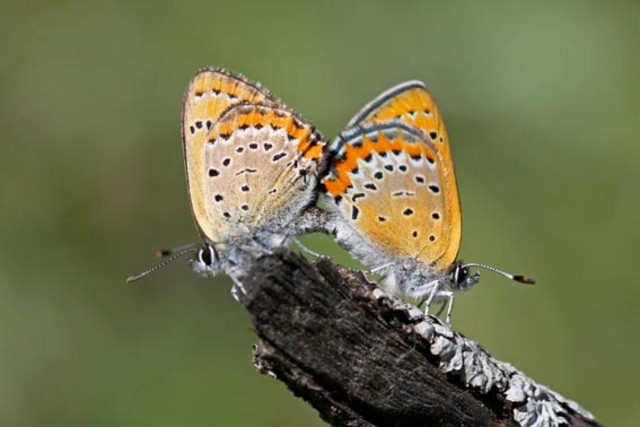 In Romania, the Violet Copper is known to occur in two large populations: one in the Forest of Doua Veverite (where a mark-release-recapture study is ongoing), and the other near Vad, in Brasov County. Dr. Cristina Craioveanu is head of the project organised by the Department of Taxonomy and Ecology from the Babes-Bolyai University in Cluj-Napoca. The research program is funded by the European Social Fund in a Structural Operational Program for the development of human resources.

Some previously known colonies in Romania are already extinct, with a similarly dire situation also the case across Hungary, Latvia, Slovakia and the Czech Republic. In Western and Central Europe, populations of this butterfly occur mostly in high-altitude mountainous areas although, even here, habitat has been restricted to ever-smaller suitable areas. In contrast, the Romanian populations seem to occur at lower altitudes and not necessarily just in moist meadows, but also in moist forests with many glades. Its survival here depends on abundance of the larval food plant Polygonum bistorta, which in turn depends on critical soil moisture level and insolation at ground level. As the canopy closes through succession, the larval food plant disappears, as do other nectar sources for the adult butterflies. 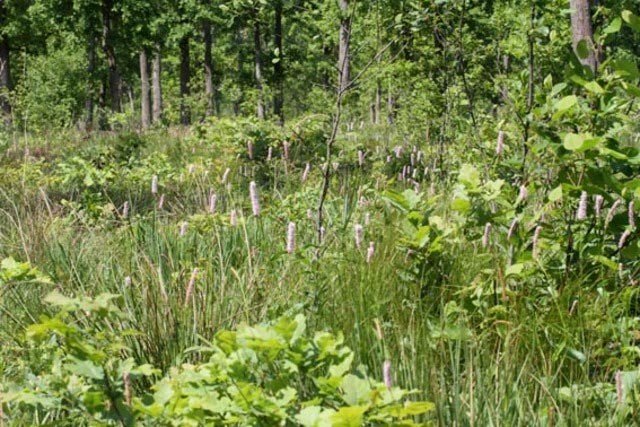 This May, two lepidopterists from the West Midlands and members of Butterfly Conservation European Interest Group, Martyn Davies and Roger Wasley, joined two other volunteers and travelled to Transylvania to partake in valuable fieldwork, which monitors the butterflies' population at its main stronghold in the heart of Dracula country. The volunteers were met by Dr. Craioveanu's team at the airport and then travelled to the forest, situated about 10 kilometres from Baia Mare, in northwest Romania. They stayed in a hotel surrounded by 200 hectares of oak forest — including some poplars and scattered hawthorn understory — and awoke each morning to the songs of Golden Orioles, Cuckoos, Nightingales, while four species of woodpecker (including Grey-headed and Middle Spotted) were heard drumming. Very keen to get their teeth into the project, the team were quickly trained up in the art of catching and handling butterflies by Cristina. The method involves working in pairs; one person nets a Violet Copper, extracts the insect very carefully and subsequently marks it with a unique number on the wing using a fine felt-tipped pen. The second person records time, date, number, sex and approximate age of each butterfly, and uses a GPS to establish its exact position. 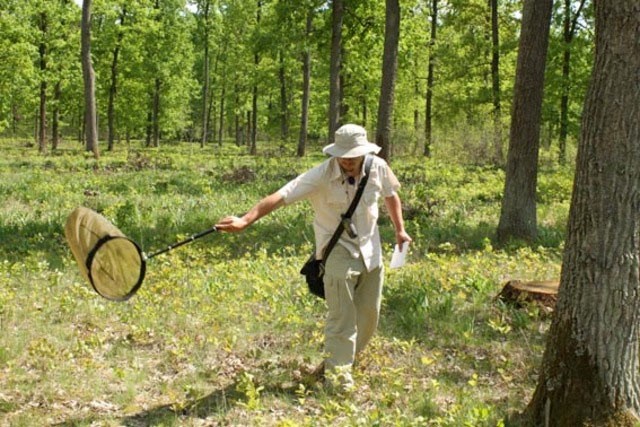 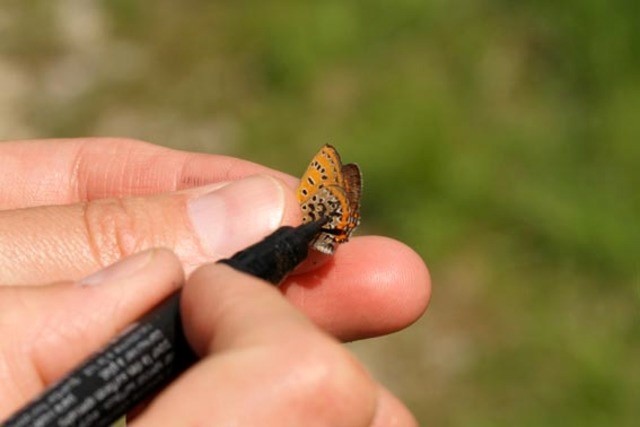 On subsequent days, both newly emerged butterflies and recaptured numbered insects were caught, processed and recorded in the same way. The method will, at a later date, make it possible to determine how far each butterfly has travelled. By the end of the week the team had logged more than 1,500 individuals and had a recapture rate in excess of 20%. The project will continue until the end of the butterfly's second brood flight period in late July. Following this, the university students have the giant task of entering the data into a program and finalising the results. It's the first time anyone from outside of Romania has joined the project; Roger described the week as thoroughly enjoyable, albeit very hard work! 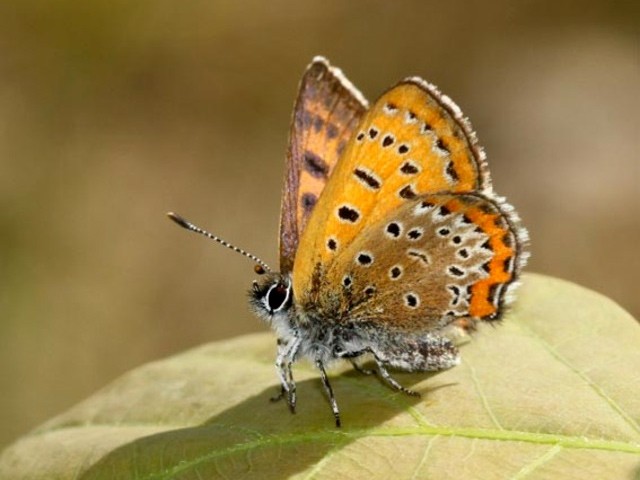 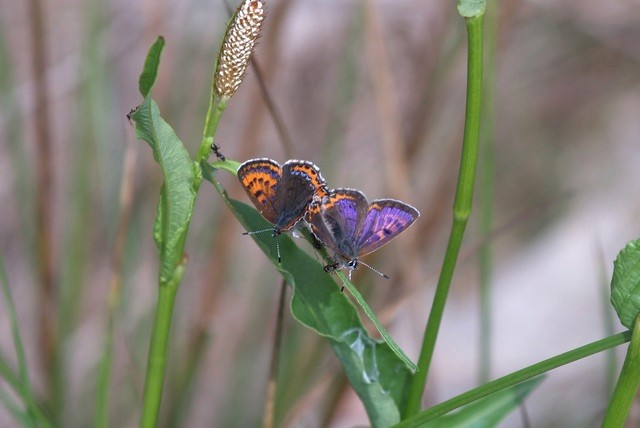 In their spare time and at the end of the week, the volunteers also had time to explore further afield, in the foothills of the Carpathian Mountains and at the spectacular Turzii Gorge. Here, they looked for a range of wildlife including butterflies, moths, birds, lizards, frogs, snakes, and anything else that moved! 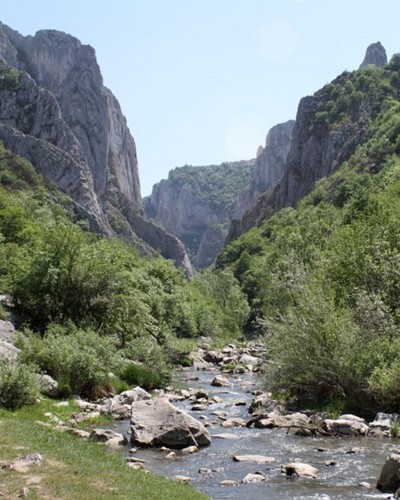 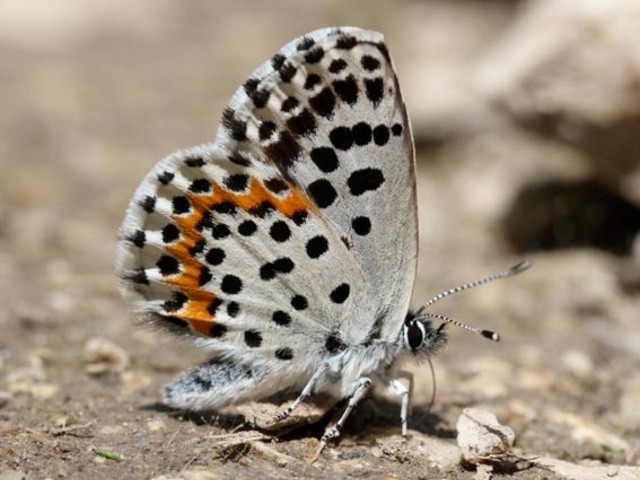 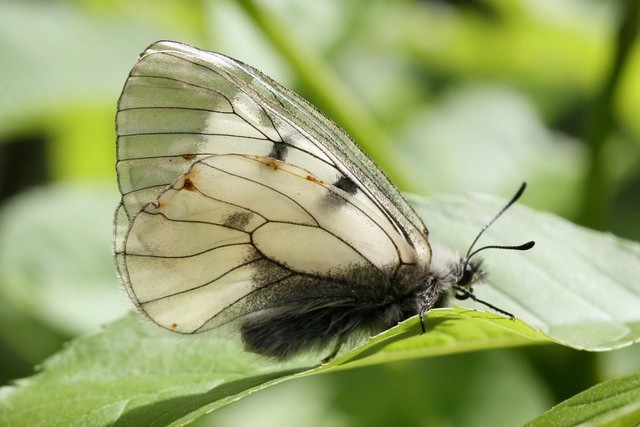 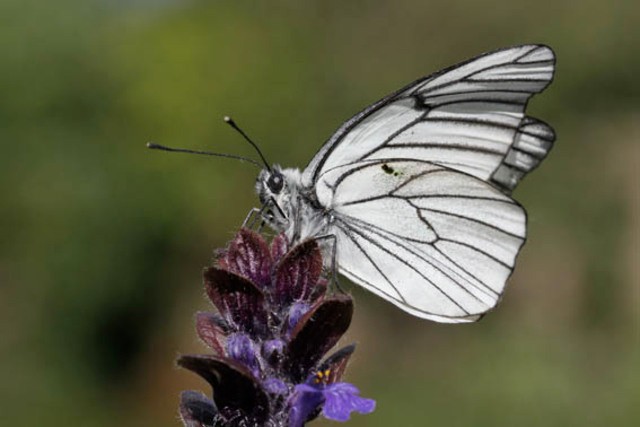 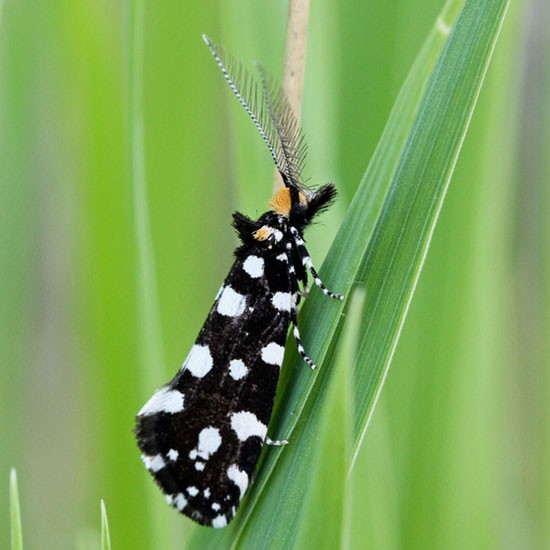 There is a second brood of Violet Copper in July, when further fieldwork will be undertaken. It will be interesting to learn whether there are any differences in data collected during the second brood, as vegetation and other factors may vary in the later summer period. Hopefully, the overall results will help to give Romanian scientists the ecological answers needed to conserve both the butterflies and the specialist woodland habitat in which they exist. Anybody interested in taking part in this entirely self-financed volunteer work can contact the project by emailing or writing to Cristina: