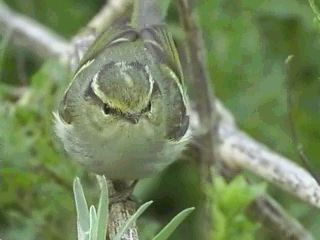 Most of the birds named in honour of the German explorer/naturalist Peter Simon Pallas constitute a mouth-watering roll-call for European birders. Included are six Eastern Palearctic species, three of which are extreme rarities in Europe (Pallas's Sandgrouse, Pallas's Grasshopper Warbler and Pallas's Reed Bunting), one of contentious status (Pallas's Rosefinch), and one which formerly bred as far west as the Caspian Sea (Pallas's Fish Eagle). In addition, Pallas's Gull has also recently taken his name (it was formerly known as Great Black-headed Gull) and will doubtless grace a British water before long.

One of the smallest species to be accorded his name was collected by Pallas in the area of Transbaikalia, near the Mongolian border, during the late 1700s. This is regarded by many birders as the jewel of an autumn day - the ultimate 'sprite', the Pallas's Warbler (Phylloscopus proregulus). A striking Goldcrest-sized bird, the Pallas's Warbler is a diminutive hyperactive green bundle punctuated by three yellowish head stripes, and two sets of double wing bars (coining the affectionate term of the 'seven-striped sprite') and a beautiful pale yellow rump patch. The latter is usually only revealed when it characteristically hovers, usually when picking insects off the underside of a yellowing autumnal Sycamore leaf.

Pallas's Warbler is an altitudinal and summer migrant of eastern Asia, breeding in montane coniferous or broadleaf forest, and wintering at lower elevations within its breeding range and in areas of northern South-East Asia. Yet, every year, a number of these jewels, facilitated by favourable high-pressure weather systems over Central Asia, reverse migrate and aided by a favourable vector of weather conditions arrive in northwestern Europe. In some years, the numbers may be relatively small, but in other years the numbers may be exceptional.

Historically, in the UK, the Pallas's Warbler was a great rarity, with only three records prior to 1958. The first British record (and the second European record of the Pallas' Barred Willow-warbler as it was then known) was in 1896 when one was 'obtained' at Cley in Norfolk. The second was not until 1951 when one occurred in Northumberland and the third occurred shortly after in 1957. However, since the 1960s the number of sightings has increased dramatically and this gorgeous warbler no longer retains the rarity status it once did. As a consequence it was removed from the list of species considered by the British Birds Rarities Committee in 1990, by which time over 500 had been recorded.

Although still an enigmatic and charming species, nowadays it is an expected autumn migrant with numbers varying from year to year. Exceptional influxes of over 100 birds have been noted, three of these taking place during in recent autumns. Numbers exceeded 100 birds in 1982 (127 birds), 1994 (153 birds), 1996 (142 birds) and 1997 (171 birds), presumably only a very small proportion of the actual numbers arriving. These arrivals are usually associated with high pressure stretching across from Europe to their breeding grounds during the late autumn coinciding with migration to their wintering grounds. In an average autumn it is now expected for around 55 birds to arrive in the UK, making it considerably rarer than the superficially similar Yellow-browed Warbler (Phylloscopus inornatus, on average 300+ per annum). Pallas's is a later migrant than the Yellow-browed, occurring typically from mid-October through to early and mid-November. Records outside of these periods are extremely rare, and there have been just a handful of spring records claimed in the UK.

Pallas's Warbler seems to exhibit a reluctance to reveal its presence at inland locations. There have been very few inland sightings, which is in contrast to regular inland sightings of Yellow-broweds. The ratio of occurrence for the two species in Rare Birds in Britain and Ireland was roughly 9 Yellow-broweds for every Pallas's, but the inland ratio is disproportionate and finding a Pallas's is a major prize for the land-locked patch-watcher. To illustrate this fact, in Yorkshire there have been in the region of 200 coastal sightings of Pallas's Warbler, with just one inland bird that betrayed its clandestine arrival at a West Yorkshire site by depositing itself in a strategically placed mist-net. Unusually this find was during an autumn when none were detected along the coastal stretch of the county!

Should you wish to observe this exquisite warbler in the UK a trip to a coastal promentary or bird observatory in late autumn will be necessary. For those hoping to find their own, an east or south coast site offers the greatest odds of success. In the west of the country the Pallas's Warbler remains an extremely rare bird, a statistic supported by the very small number of Irish records. However, favoured localities on the mainland include Yorkshire locations such as Flamborough Head and Spurn Point, whilst Holkham Woods in North Norfolk is another good east coast site. Further south, areas such as Dungeness and St Margaret's in Kent, Beachy Head in East Sussex and Portland Bill in Dorset are prime locations, though in reality the would-be seeker of this gem stands as much chance of finding their own on any stretch of the east and south coast under favourable conditions during an arrival. One way of locating your own bird, and to enjoy the ultimate pleasure of the find fully, is to search diligently through late October and early November mixed 'crest and tit flocks with which Pallas's frequently consort in coastal valleys and ravines, all the time keeping your eyes alert to the diagnostic lemon-yellow rump and its supporting 7 stripes - the experience will not disappoint!

Clearly the fortunes of this species in the UK and western Europe have changed rapidly during the past 20 years or so, and no doubt this change is a genuine one and is not merely attributable to an increase in the number of observers - one would expect the steady state to hold at the observatories should there be observer bias at play. The latter argument is not supported by the evidence, as numbers at bird observatories have increased in accordance with those elsewhere during the short timeframe in question. The reasons underpinning this deliberate reversal of migration routes by a small proportion of the population are not clearly understood, but it is a pattern that appears to be paralleled by a number of other Siberian vagrants that are now regular visitors in increasing numbers to our shores. Twenty years ago many of these vagrants were discussed in reverent tones by the knowledgeable few, but nowadays a call to any of the information services during October or early November will pinpoint the location of at least one, and often several, of these species.

Unlike, for example, the Yellow-browed Warbler, there appears to be a reluctance of Pallas's Warblers to winter here, and one can only presume that the vast majority of birds reaching our shores continue their reverse migration westwards to perish in the Atlantic - a grim hypothesis, but a saddening conclusion supported by the very small number of winter and spring sightings. However, this situation may in due course change as this diminutive 'phyllosc' replicates the behaviour of its close relative and occasionally overwinters in the UK or elsewhere within western Europe. As observers we can only hope that this rapid change in behaviour, whatever the reasons, continues for this special bird! 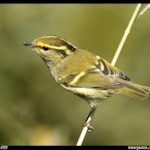