In the gloomy pre-dawn half-light we start seeing them. Enormous hunchbacked shapes drifting in and out of  the mist over a lead grey ocean. At first just singletons, but as the morning mist clears, dozens, effortlessly circling the ship as we head southwards. Wandering Albatrosses – the avian kingdom's most accomplished mariner. This is their realm, amid the fabled and inhospitable Roaring Forties of the southern oceans, and we’re approaching our destination. Marion Island: an imperilled seabird paradise.

Home to more than 40% of the world's Wandering Albatrosses, part of a staggering abundance of breeding seabirds numbering approximately two million individuals of 28 species, Marion and Prince Edward Islands are situated in the subantarctic, roughly equidistant between South Africa and Antarctica. Despite its geographic remoteness, non-native House Mice were inadvertently introduced to Marion Island (but not Prince Edward Island) by seal hunters in the early 1800s, followed by domestic cats in the 1940s. These introductions have had profound impacts on Marion's seabirds, and while cats were eradicated in the 1990s, this removal concurrently allowed mice populations to explode. 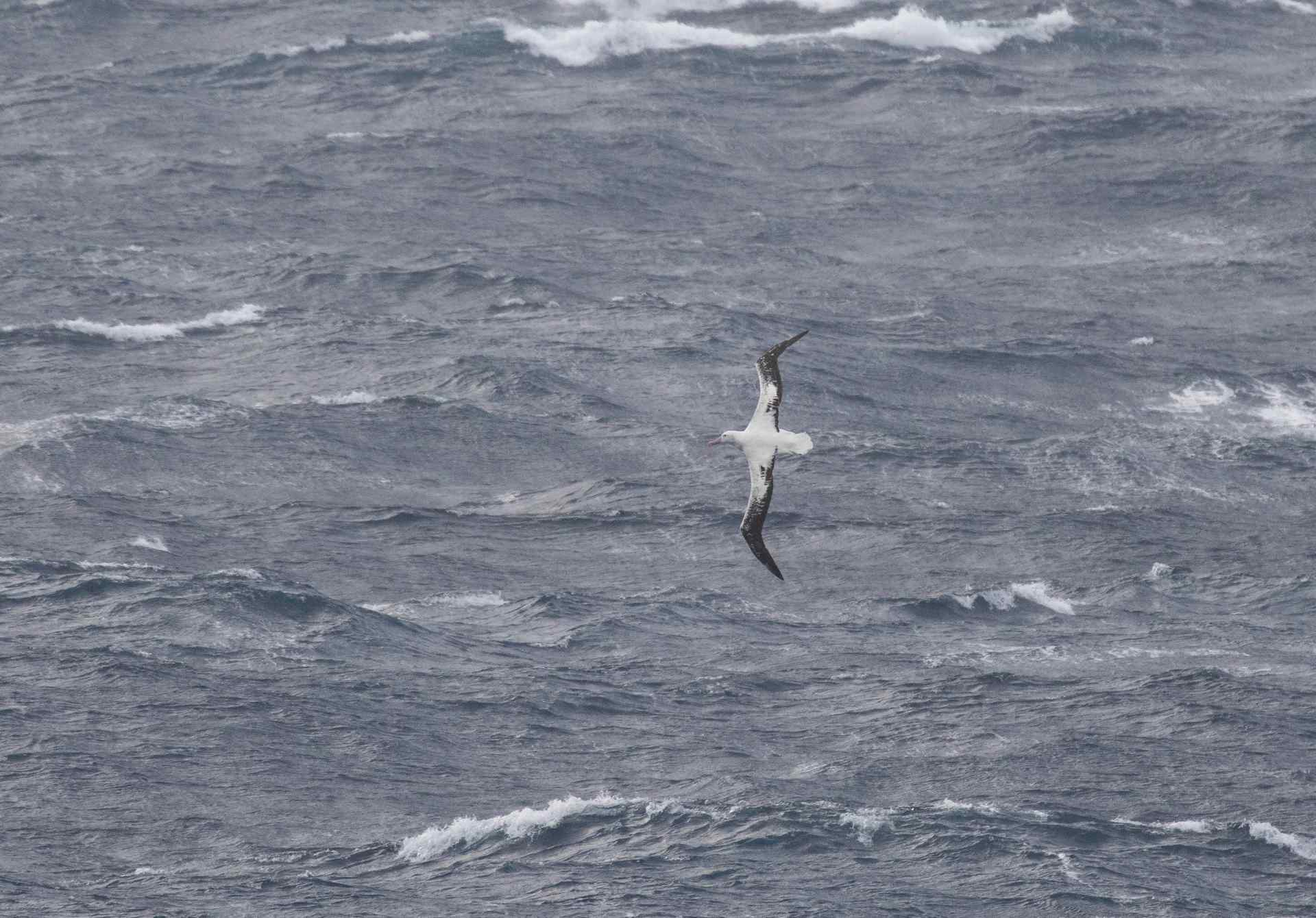 Marion and Prince Edward Islands are home to some 40% of the planet's population of Wandering Albatross. Plenty were seen on the cruise (Sam Jones).

Due to higher winter survival rates and reduced native invertebrate populations (the typical diet of invasive mice) because of changing climates, mice have increasingly turned to alternative food sources, seeing dramatic increases in predation of seabird chicks, including albatrosses on the nest. The presence of non-native House Mice is thus considered to be the most significant conservation concern for the native biota of Marion Island, and it is the solution to this problem that we are here to collectively tackle, albeit in the incongruous fashion of  a 300-m long cruise ship laden with 1,500 birders.

This is a cruise-come-pelagic quite unlike any other, designed by birders for birders, but with a conservation output. The aim: to garner support for the Mouse-Free Marion Project, an ambitious plan to eradicate non-native House Mice from Marion Island by 2024. This effort is no mean feat. It will be the largest project of its kind ever undertaken, and there is no margin for error. For it to be successful, every individual mouse must be successfully eradicated.

An operation that will involve in excess of 300 tonnes of poison bait drops from specialised helicopter drop-offs utilising methods perfected in successful rodent eradication efforts on 70 islands worldwide. The removal of mice will not only benefit seabird populations, it will also benefit native vegetation and invertebrate populations, both suppressed by the population explosion of  this novel predator. 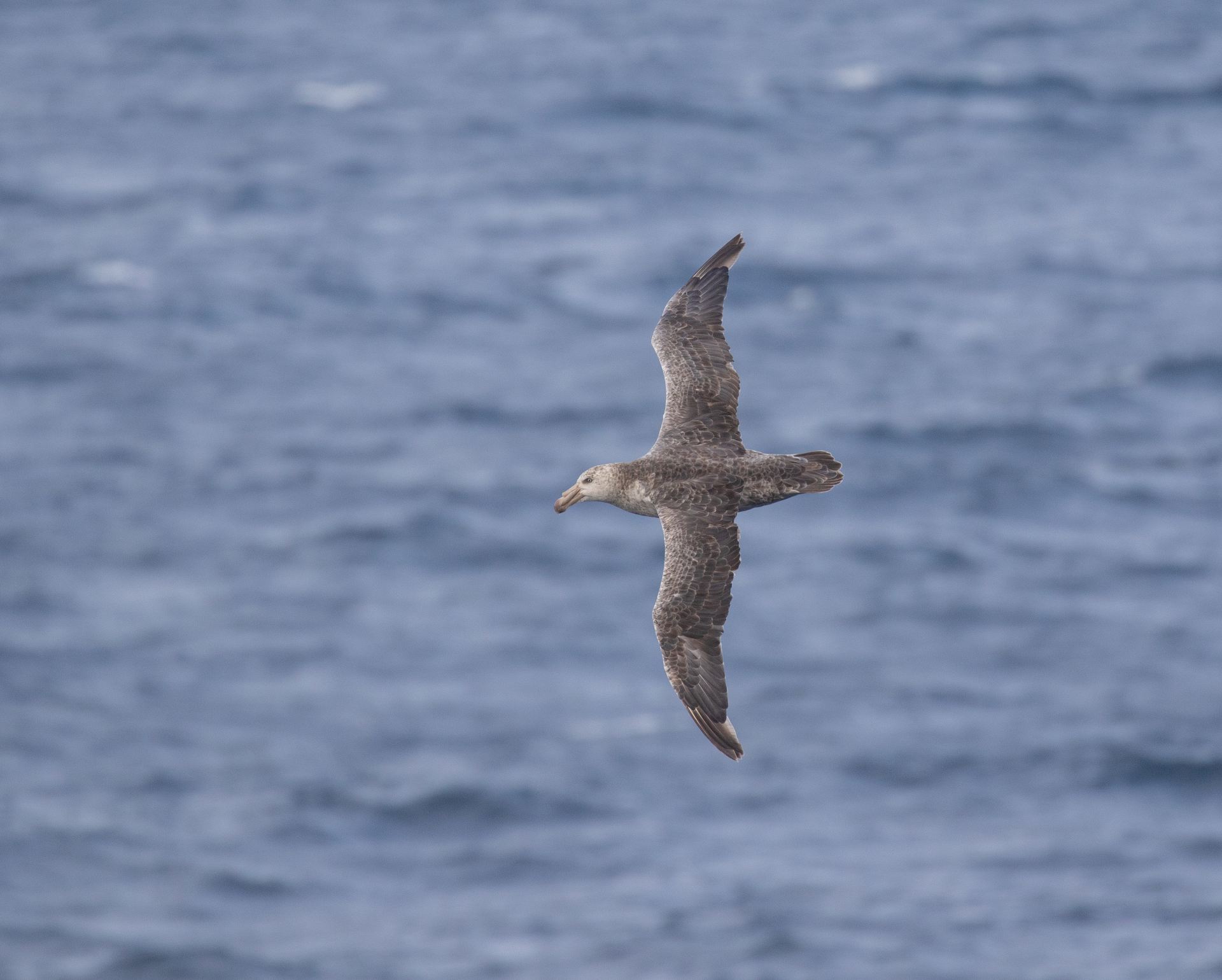 This is the third all-inclusive cruise-pelagic that Birdlife South Africa has run in recent years. Affectionally dubbed 'Flocks' in conjunction with MSC Cruises, Flock to Marion is comfortably the most ambitious, sailing far into subantarctic waters not part of any usual cruise routes, and virtually unvisited by birders other than a handful of seabird biologists. Indeed, finally setting sail was an undertaking itself  – delayed for a year because of the global pandemic, then switching departure port from Durban to Cape Town. Finally, as if fate had one more hand to play, high winds in Cape Town almost left us stranded in port, forcing an earlier departure than planned, with late passengers ferried over to the ship in tugboats.

There had been a collective fizz of excitement on deck ever since we left the balmy summer weather of  Cape Town. Here, our first evening was spent watching Southern Right and Humpback Whales and splitting flocks of hundreds of Sabine's Gulls and Common Terns along with a scattering of White-chinned Petrels, Arctic Skuas and Sooty and Cory's Shearwaters as we slowly made our way out of  coastal waters.

As we headed towards the continental shelf edge on our first full day on deck we logged our first albatrosses, Indian Yellow-nosed Albatross, followed shortly by Shy and the only Northern Royal of the trip, amid the reams of White-chinned Petrels, Cory's Shearwaters and a handful of Southern Giant Petrels and Manx and Little Shearwaters. Scattered within them were a group of Grey Phalaropes and our first storm petrels; Black-bellied, White-bellied, Wilson's and our only Leach's Storm Petrel of the expedition. 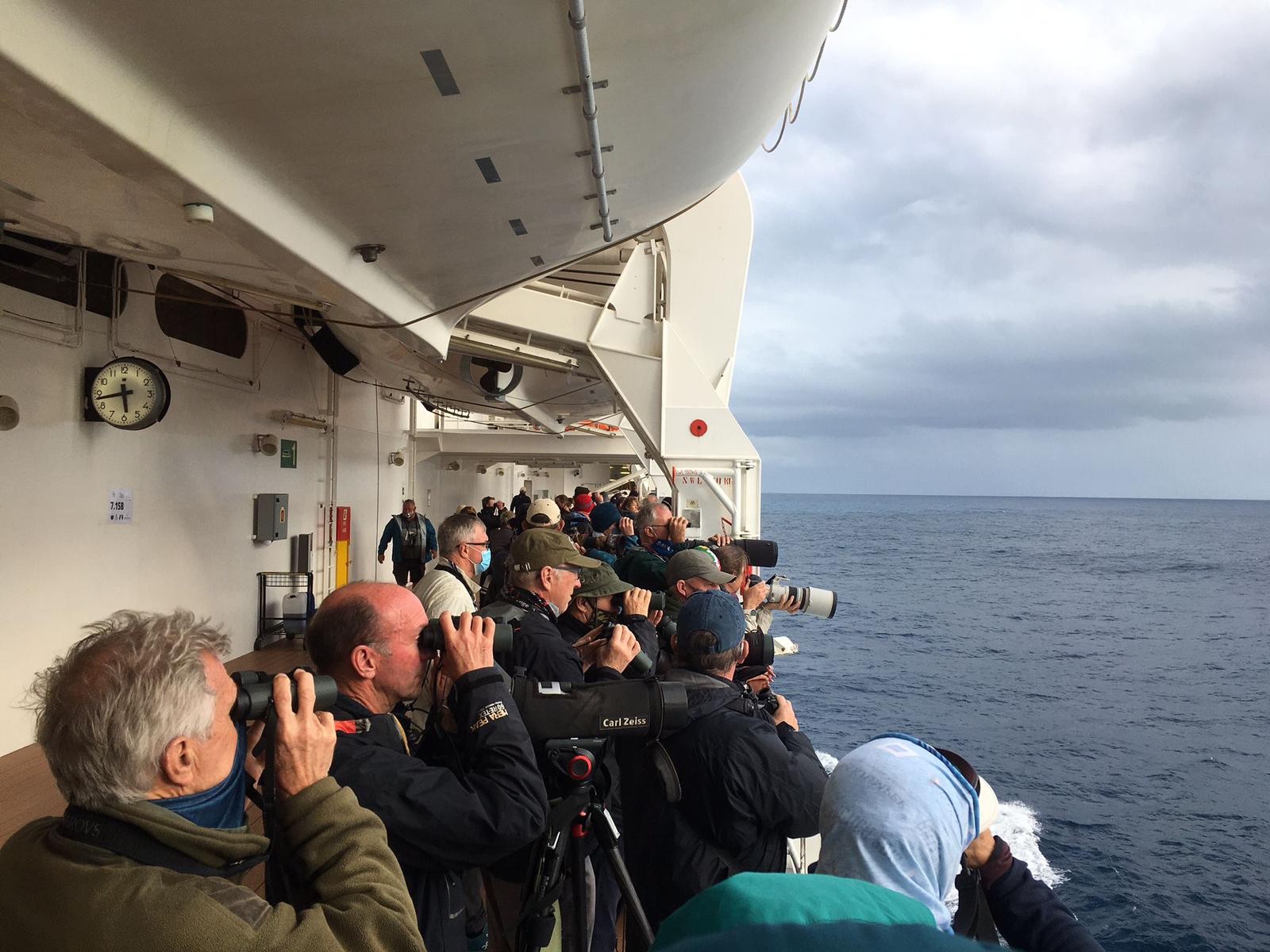 On-deck twitches were a regular theme of the cruise, with the ship's PA system even announcing what birds were present (Niall Keogh). 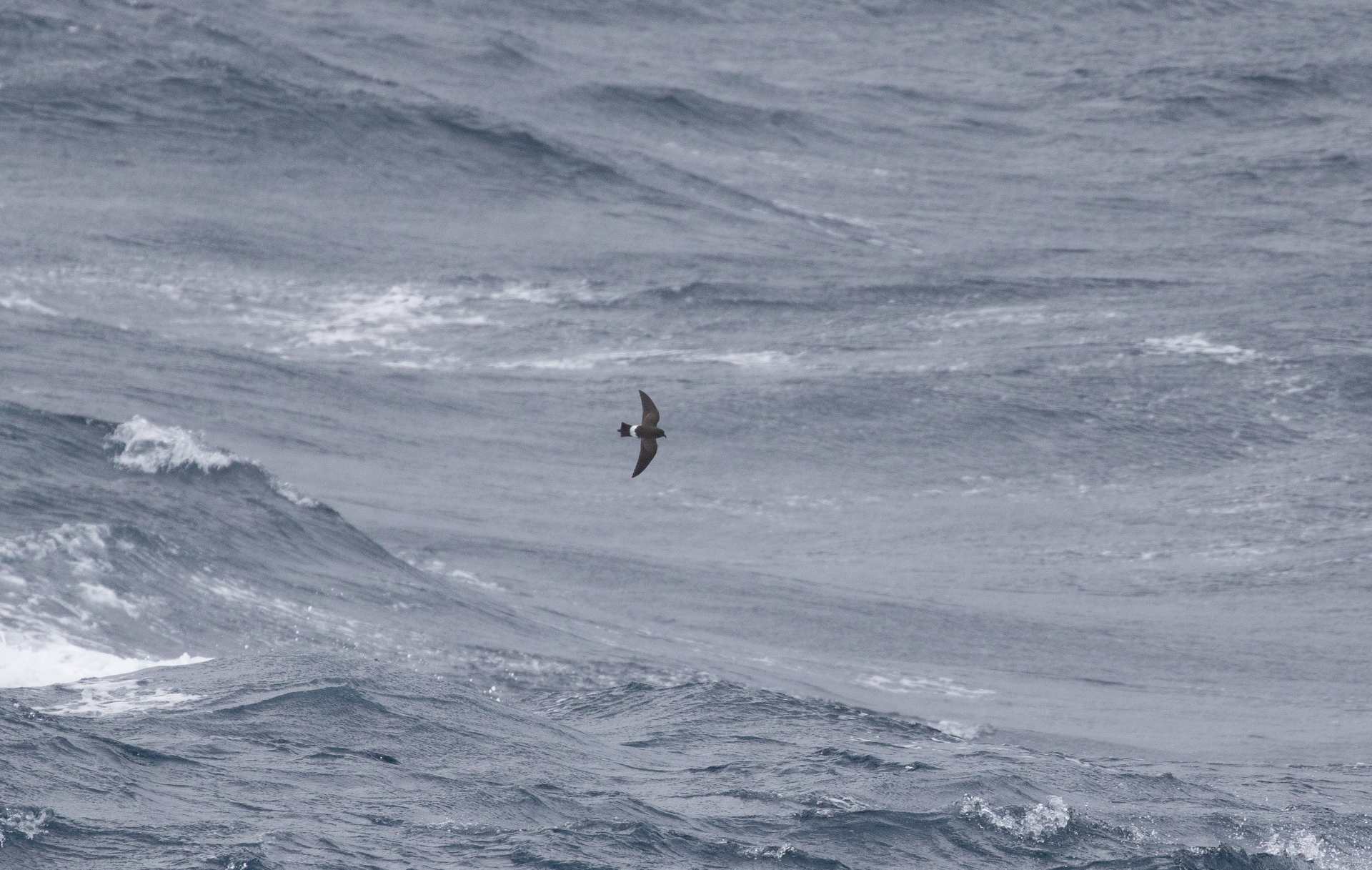 MBlack-bellied Storm Petrel is widespread in the seas of the Southern Hempishere and was readily encountered (Sam Jones).

Moving into deeper waters as we sailed towards Marion brought further interesting transitions between the abundant Great-winged Petrels to Soft-plumaged Petrels, now outnumbering their Pterodroma counterparts. These deeper waters brought more cetaceans as well, including a pod of Sperm Whales logging distantly for more than 20 minutes, two all-too-brief Blue Whales, and glimpses of our first beaked whales – Cuvier's and then Arnoux's. This far offshore, prions were now the order of the day with flocks of hundreds causing ID headaches as we carefully scrutinised and photographed as many as possible (virtually all here being Salvin's Prion), as well as securing good enough views to pin the ID of Subantarctic Shearwater from Little.

Twitching on a boat

Unlike a typical cruise where passengers may rest and relax by the pool with a cocktail or two, the majority of passengers on Flock are on deck shortly after 4 am to secure prime position in their preferred viewing spot, and the bars empty by 9 pm. All-you-can-eat breakfasts and lunches are wolfed down to avoid missing birds, and even the ship's PA system is utilised to spread news on the latest notable sightings; the opening gambits 'BIRD ALERT, BIRD ALERT' prompting panicked 'twitches' across the ship in a flurry of optics and camera gear.

In keeping with this unique cruise-pelagic feel, the usual first-class evening shows and entertainment have been abandoned in favour of talks by prominent seabird researchers such as Peter Harrison and Peter Ryan, in addition to the 40 expert guides on deck during the day to help with identification and get people onto birds. Want to get your optics serviced for free on board? Come and find the Swarovski and Zeiss stands next to the casino!

While the birding had been excellent on our journey southwards, it's fair to say that nothing quite prepared us for the seabird spectacle awaiting us in the waters surrounding Marion and Prince Edward Islands. The anticipation was palpable as the crowds gathered on deck before dawn as we steadily approached the limits of the marine protected area. There was a murmur of excitement as Prince Edward Island briefly came out of its cloud-cloak into view, and all the while we were surrounded by hundreds of albatrosses, predominantly Sooty Albatross, Wandering and Indian Yellow-nosed Albatrosses, with smaller numbers of some of the southern speciality species such as Light-mantled and Grey-headed Albatrosses. 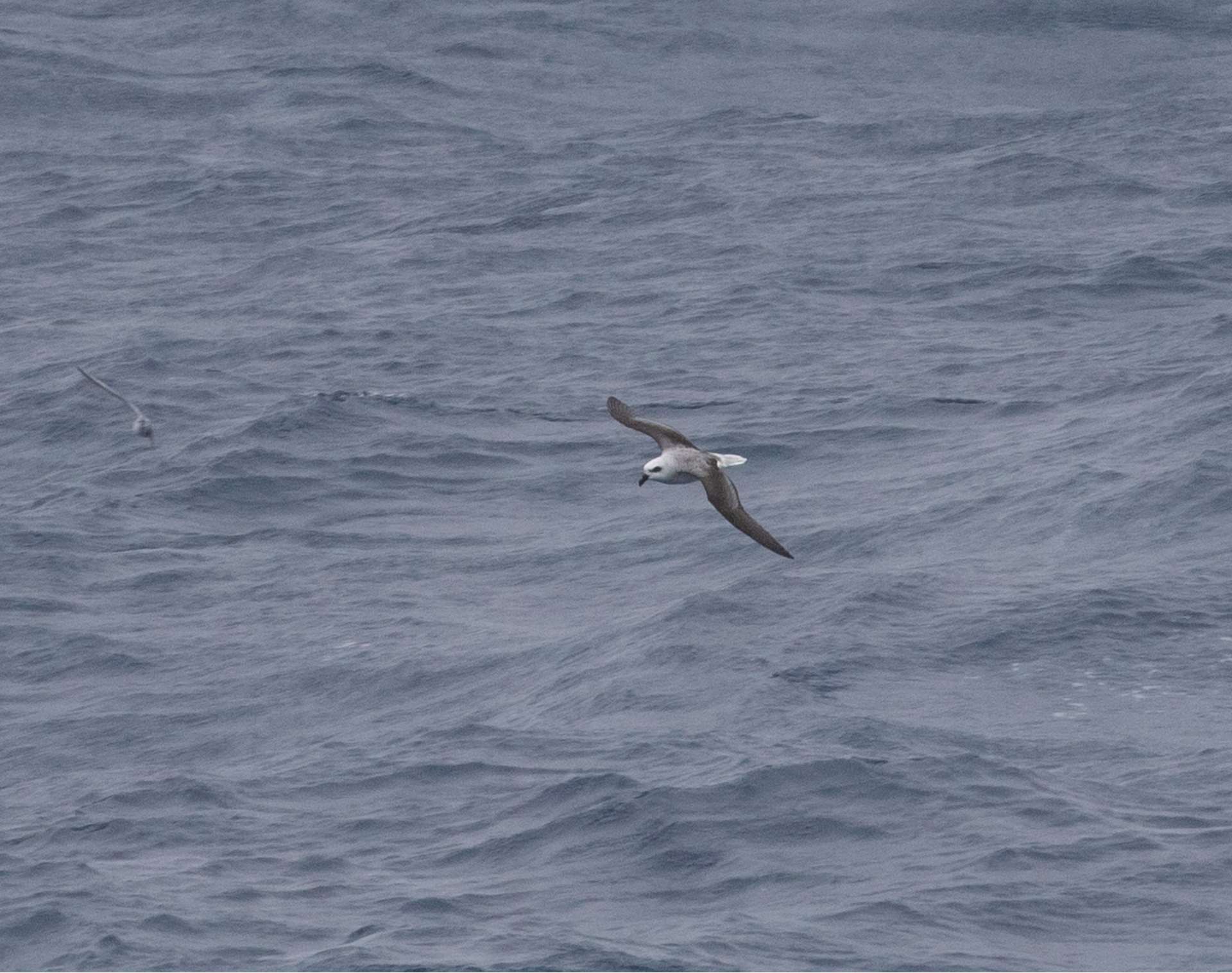 White-headed Petrel, which breeds in burrows dug among tussocks and herbfields on subantarctic islands, was another species logged (Sam Jones).

As we circled the northern side of Prince Edward Island, Macaroni, Southern Rockhopper and King Penguins porpoised away from our wake, while Common Diving Petrels and Black-bellied and smaller numbers of Grey-backed Storm Petrels skipped over the waves close to the ship. In the near distance a constant stream of Salvin's Prions zipped by, with careful scrutiny allowing us to pick out Fairy and Broad-billed Prion's, and occasional Blue Petrels.

Now in comparable numbers again, Soft-plumaged and Great-winged Petrels sheared through in their characteristic Pterodroma arcs, occasionally interspersed with White-headed Petrels and the ever-present 'reference' White-chinned Petrels. To complete the surrounding by seabirds – Southern and Northern Giant Petrels hung in the wind adjacent to the ship eyeing us up with their beady expressions, while Brown Skuas circled us and move on. 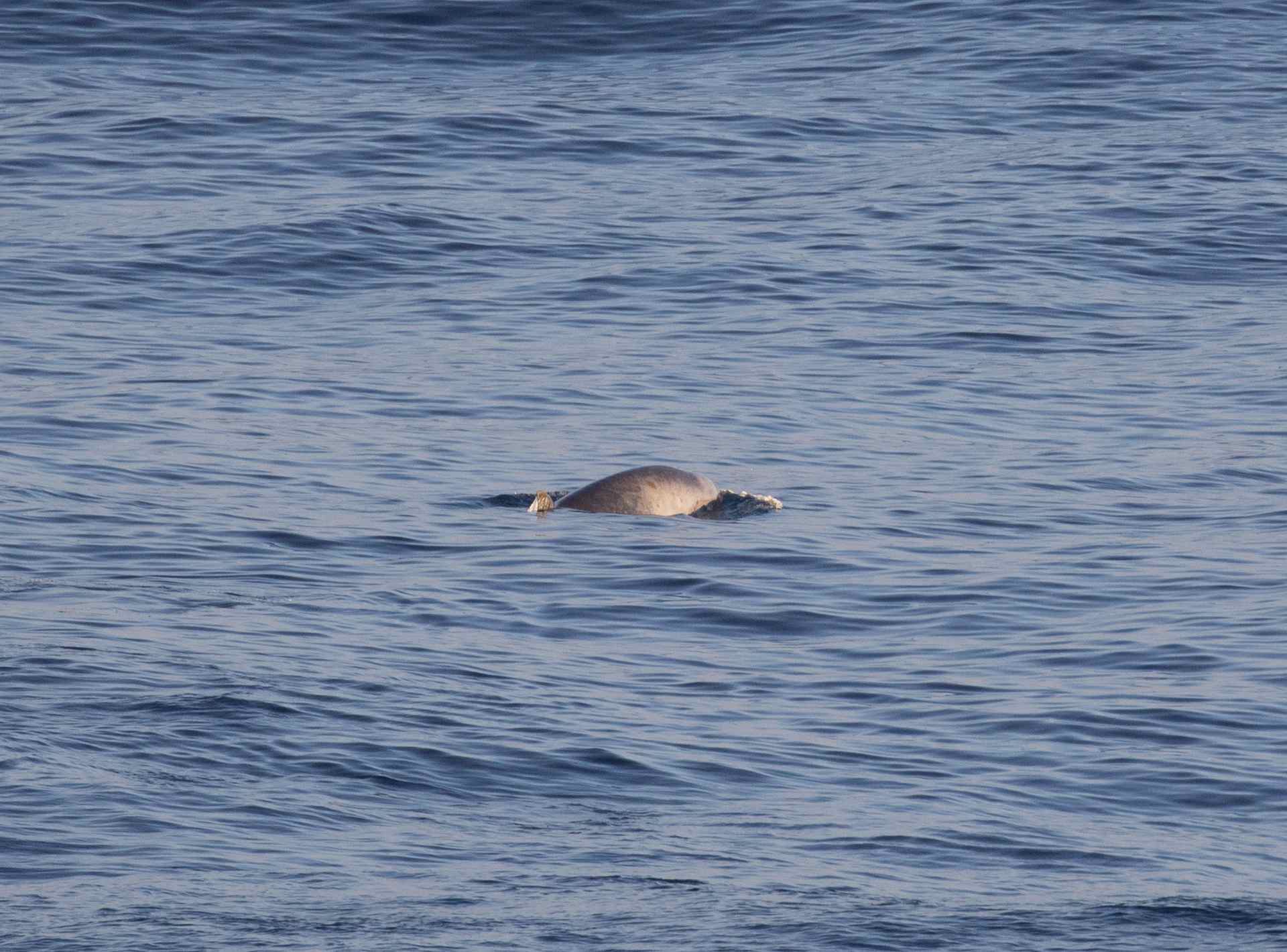 Plenty of cetaceans were enjoyed by the passengers, including this Gray's Beaked Whale (Sam Jones).

At times our day around Marion and Prince Edward Islands felt more like a rendition than reality. Seabirds were everywhere, with constant shouts of species and their positions rippling down the sides of the ship every feminutes. It was after the umpteenth time I shouted 'Grey-backed Storm Petrel – two o'clock, 50 m' that I and the little crowd around us actually checked the time. In doing so we collectively realised that we'd spent almost 11 hours rooted to our posts, scanning every bird and patch of ocean while cycling between optics and camera viewfinders, fuelled on the pure intensity of the spectacle on offer that so few have had the privilege to witness. Two days later acclaimed seabird expert Peter Harrison even noted it as one of the greatest albatross days he has ever witnessed.

News of a substantial storm system meant our stay in the vicinity of Marion and Prince Edward was all too brief (indeed, even briefer than the 24-hour stint we had initially hoped for), but still somehow completely satisfying. The journey back to Durban was more subdued as we battled through the tail end of the storm system, which rendered many decks off limits for safety concerns and birding largely impossible for a day owing to high winds.

There was still time for one last major highlight, however, when two Tristan Albatrosses (restricted to a tiny population of 1,500 pairs on Gough Island in the South Atlantic) were skilfully picked out from the Wanderers chaperoning our northward journey by their unique combination of a 'piano key' tail pattern and largely dark wings whitening from the 'elbow' – this being a plumage combination not possible in similarly aged Wandering Albatross. 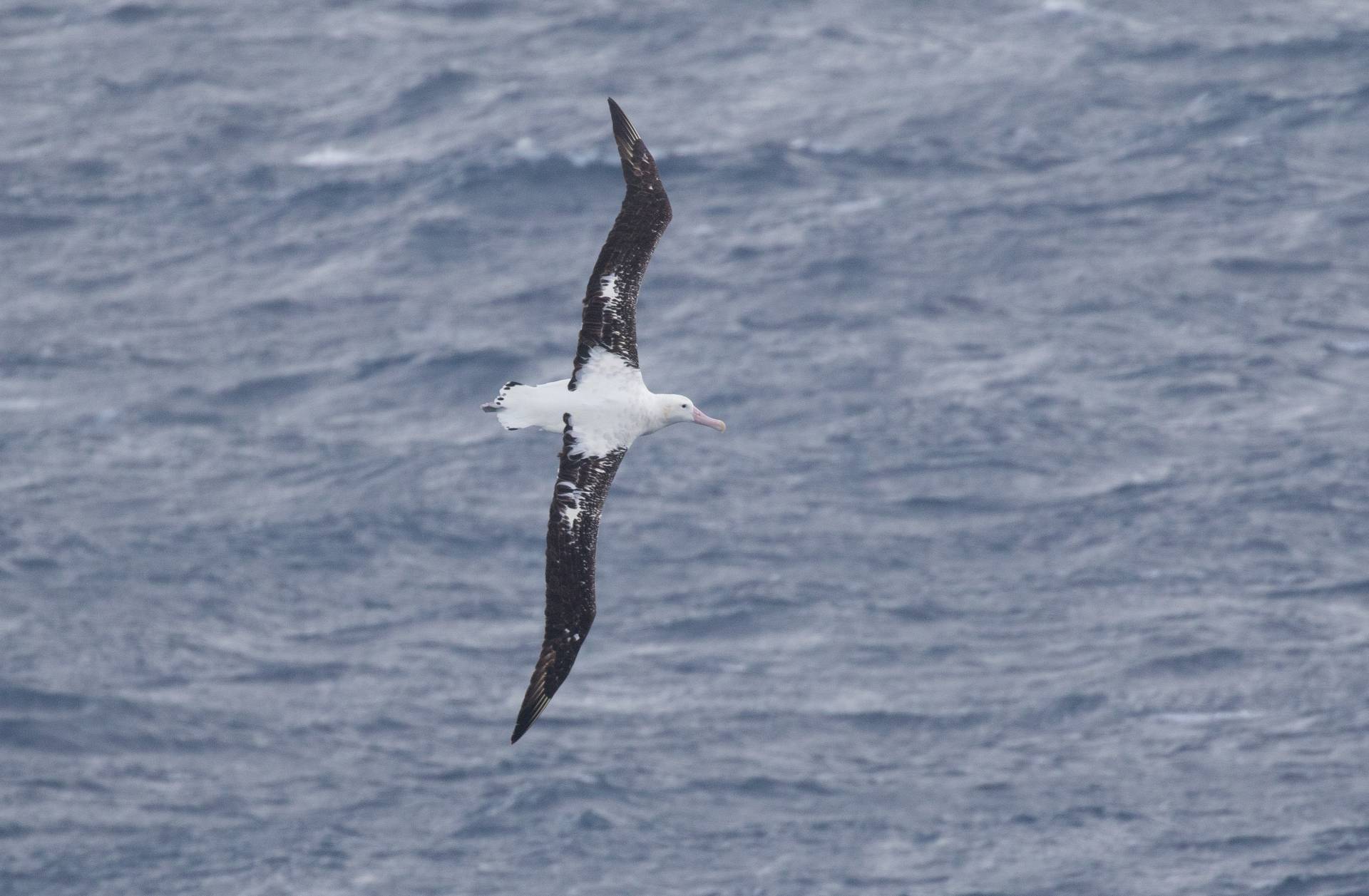 An encounter with two Tristan Albatrosses went down as one of the trip highlights (Sam Jones).

The ship was discernibly quieter with the collective comedown from the intensity of the birding towards and around Marion. Nonetheless, a return to warmer coastal waters brought us into contact with Tropical Shearwaters, Gray's Beaked Whale, Rough-toothed and Striped Dolphins, and foraging flocks of Sooty Terns.

The last two species were some of the final additions to the Flock totals of almost 60 species of seabirds (including 10 species of albatross and nine petrels), and at least 16 species of cetaceans. Wind battered, we eventually docked back into Durban laden with tales of birds seen and not seen and a new-found (or at least reinvigorated) respect for the seabirds that call the southern oceans home together, with a commitment to ensure their ongoing survival.