The aquatic heart of the world's most bird-rich continent, the Pantanal is a rip-roaring destination for South American newcomers and aficionados alike. Home to some of the New World's most breathtaking gatherings of birds, mammals and reptiles, the Pantanal is to the Americas what the Serengeti is to Africa. Moreover, much wildlife is out in the open — almost within touching distance and easily within reach of even a moderate length lens. This photographic essay marks the launch of a new wildlife and travel guidebook to the Pantanal (for which there is a special BirdGuides reader offer; see end of article) by showcasing some of the avian specialities of this fantastic birding destination.

The world's largest wetland — and more besides 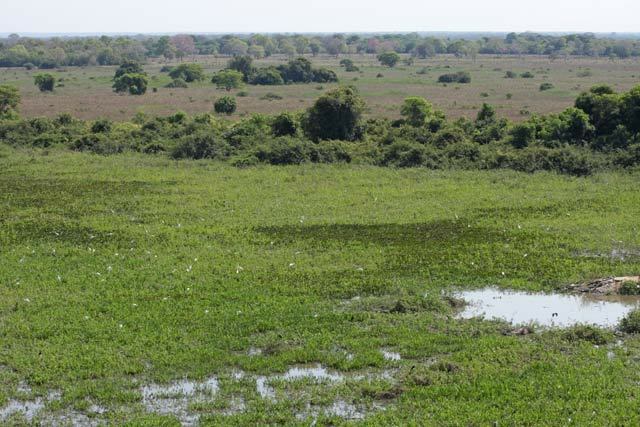 The Pantanal — from pântano, Portuguese for swamp — is the world's largest contiguous wetland. Around three-quarters of the Pantanal lies in west-central Brazil, with slightly less in the states of Mato Grosso than Mato Grosso do Sul. Of the remainder, two-thirds are in Bolivia and one-third in Paraguay. Water — its presence or absence — is fundamental to the Pantanal; the huge wildlife congregations occur in desiccating waterbodies towards the end of the dry season. But the region is far from homogeneous, with large rivers and thousands of lakes interspersed with different types of grassland and forest. This biogeographical melting pot is matched by fantastic faunal diversity.

Some 475 species of bird have been recorded. Day lists of 130 species are commonplace, and 200 species is a standard haul for a typical five-day trip. But more than the quantity, it's the quality that grabs a keen birder's attention. 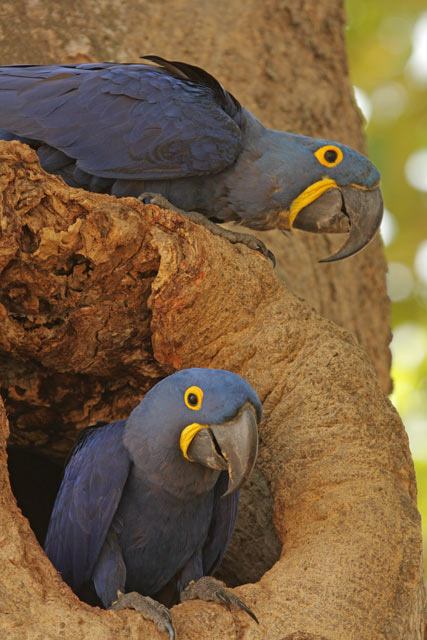 Top of the want list, without a shadow of a doubt, is the world's largest parrot. Hyacinth Macaws are easier to see in the Pantanal here than anywhere else in their declining range, no mean feat for a species classified as Endangered. Most tourist lodges in Mato Grosso host breeding macaws, with nests and their cobalt-blue inhabitants often within sight of the breakfast table. 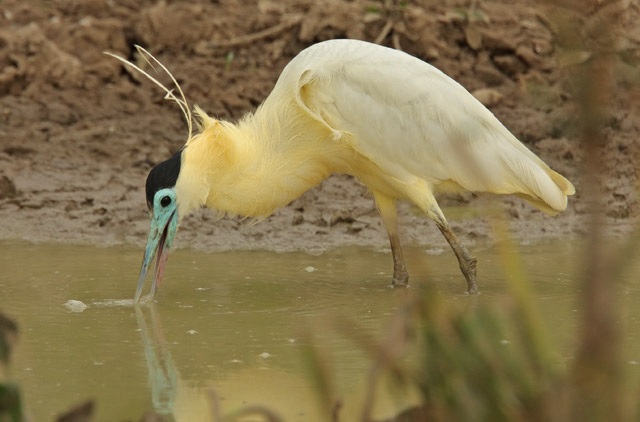 There are more than a dozen species of herons and egrets, many in abundance, and choosing one's favourite is tough. Most eco-tourists delight in the throngs of Great Egrets that line roadside ditches by day, and the scores of Black-crowned Night Herons that replace them as dusk looms. Birders focusing on long-legged specialities charter boats to examine shady rivers for Agami Heron, its plumage a shimmering blend of russet and cyan. But my own personal favourite? The serene, stunningly ivory Capped Heron, which favours secluded quiet waterholes. 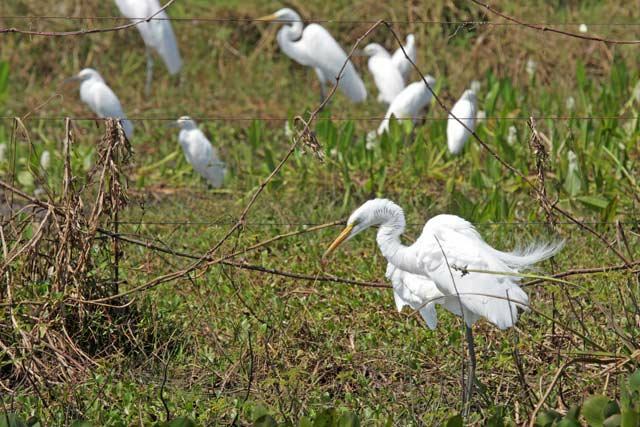 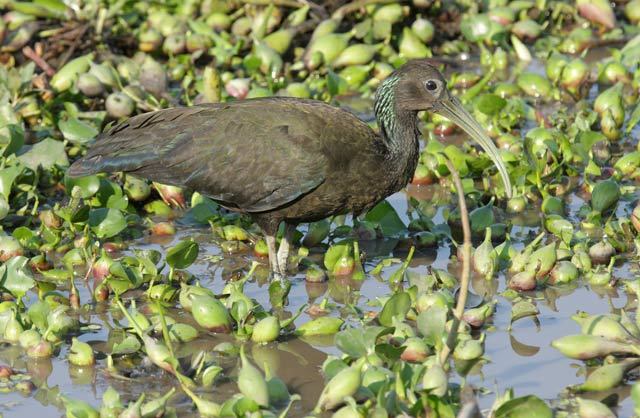 Storks and ibises are a revelation. Normally a retiring forest bird, the Pantanal contingent of Green Ibis pose unashamedly for the camera. 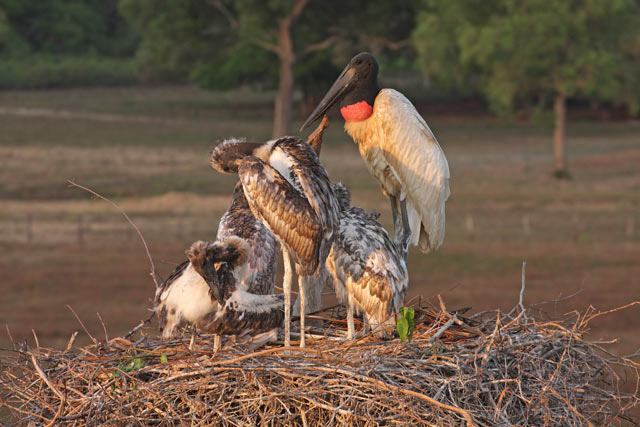 Enormous nests constructed from thick, metre-long branches enthroning isolated tall trees signal that we are in Jabiru territory. When this enormous bird is excited or stressed, its inflatable throat sac fills with blood and turns vibrant scarlet. 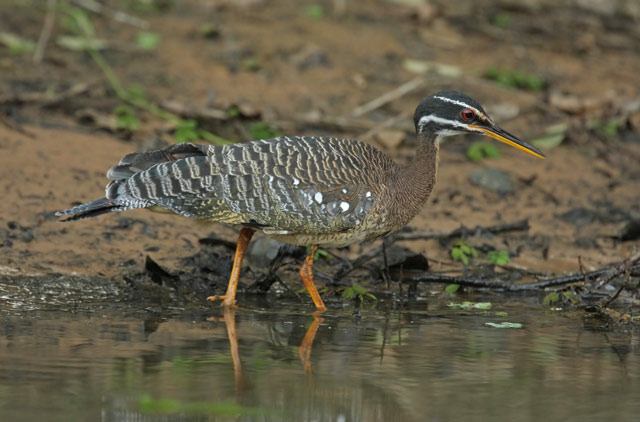 Two of the more evocatively named Pantanal specialities are Sunbittern and Sungrebe. Swimming furtively near a sheltered riverbank, the latter resembles a flattened duck. 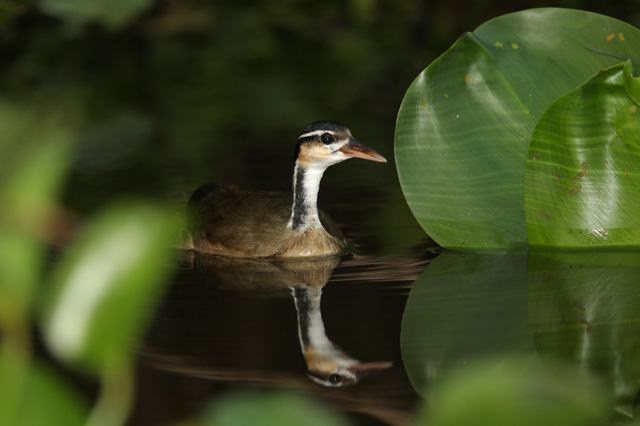 Nearby you might bump into a Sunbittern striding along like a hyperactive, stripy heron before dazzling you by opening its wings. The startling pattern of chestnut, yellow and black on its primaries resembles a huge pair of eyes: enough to make any predator think twice. 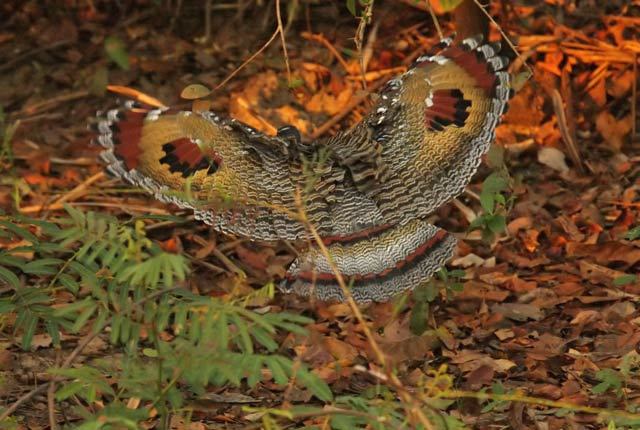 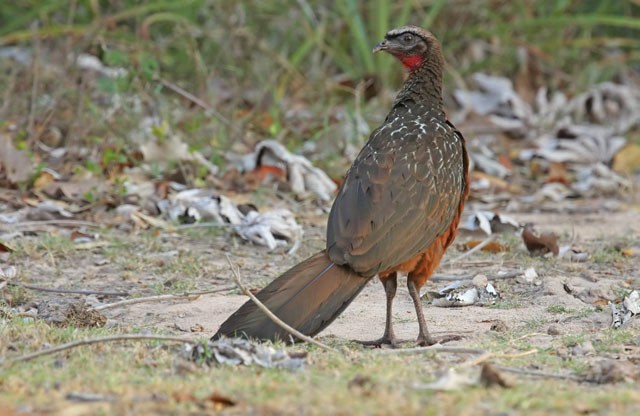 A British birder venturing to South America for the first time will probably be reminded of pheasants when seeing his or her first guan, chacalaca or curassow. Chaco Chacalaca will be your avian alarm clock, with neighbouring groups engaging in pre-dawn song battles that reverberate for over a mile. But the 'cracid' to make sure you see, if you're in the Pantanal of Mato Grosso at least, is Chestnut-bellied Guan. The Pantanal's rarest bird has a total world population of just a couple of thousand individuals restricted to an area no larger than Norfolk. 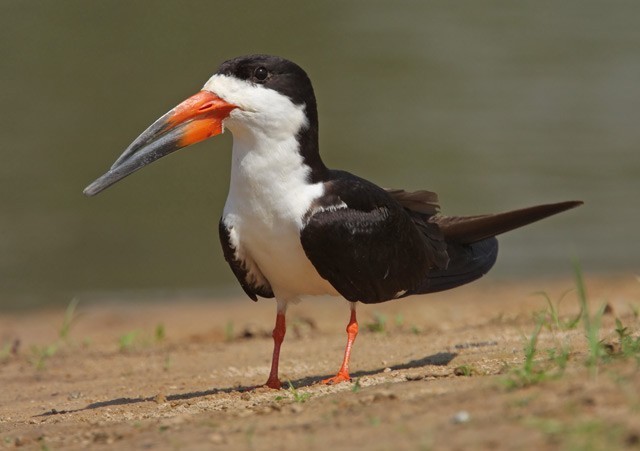 On wide rivers, make a careful beeline for river beaches. These are the breeding grounds for terns and skimmers. South America's joint-smallest tern, Yellow-billed Tern, often sits alongside one of the biggest, the Large-billed Tern. But the admittedly hefty bonce on the latter is dwarfed by the remarkable beak of Black Skimmers, whose lower mandible is half as long again as the upper. 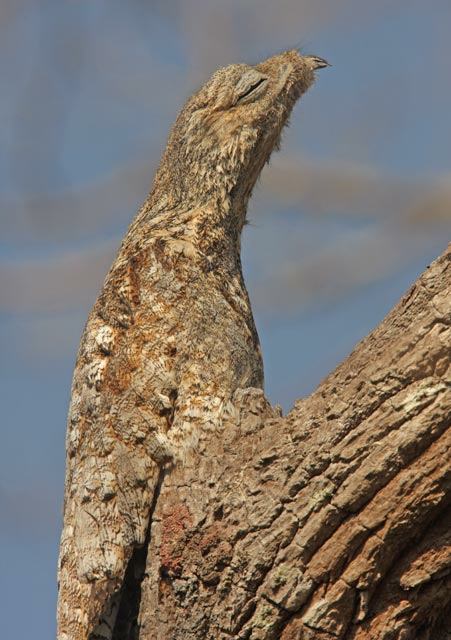 The Pantanal is great for night birds, with owls, nightjars and potoos all well represented. Perhaps the highlight, if you can spot it, is the cryptically plumaged Great Potoo. Fortunately, local guides often know the day-roosts of these remarkable creatures, enabling close views as they mimic a broken-off tree stump. 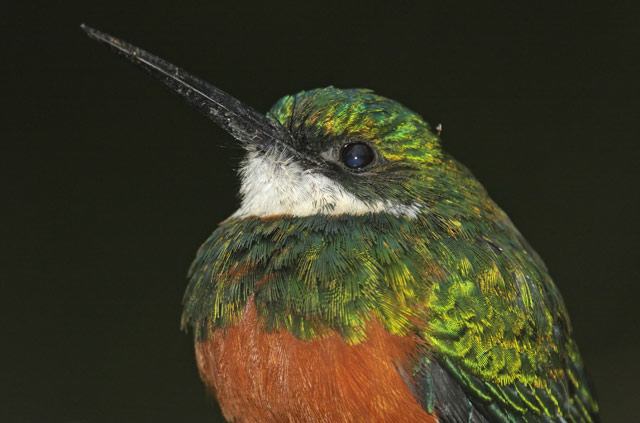 Amidst the forest gloom, your birder's eye may be drawn to a long-tailed bird sitting passively on a horizontal branch. It could equally be a trogon, a jacamar or a motmot, a distantly related trio of vibrantly coloured and tropically named genera. I have a soft spot for Rufous-tailed Jacamars, which allow close approach as they pose calmly between bouts of fly-catching. 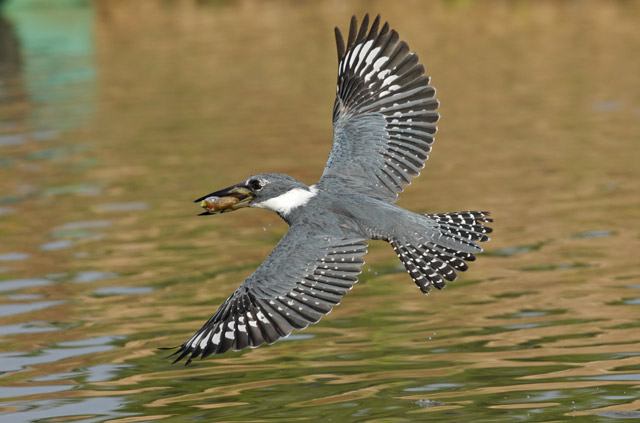 Back on the rivers, there are five species of kingfisher to see, ranging in size from the American Pygmy Kingfisher to the largest and most common, the Ringed Kingfisher. Views are often close and prolonged: enjoy and snap away! 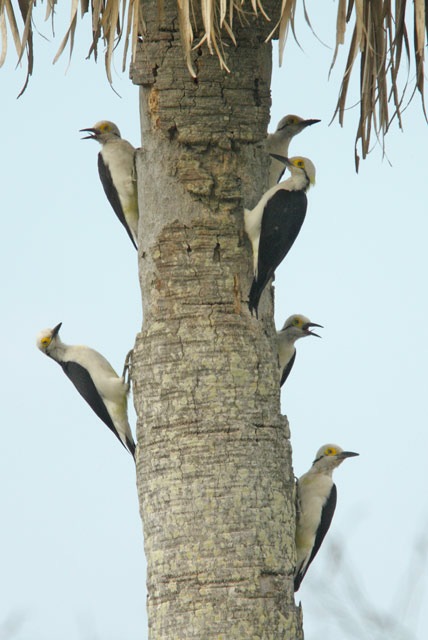 Anyone who thought the Pantanal is just about wetlands thinks again when they see up to 10 species of woodpecker: perhaps no other bird family is so inextricably linked with trees. My favourite is the gregarious White Woodpecker, which cavorts amongst savannah palms in noisy flocks. 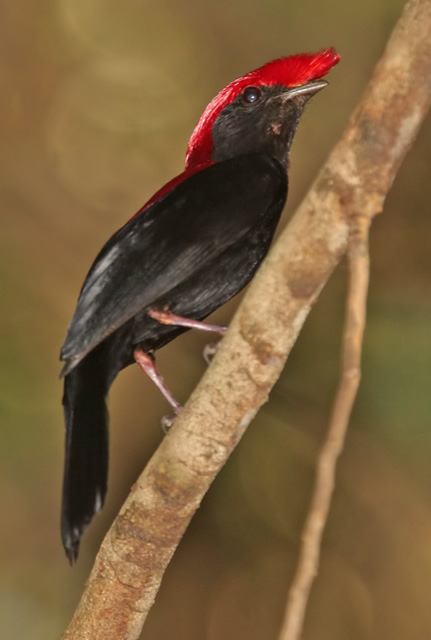 Passerines comprise just over half the Pantanal's total species list. Highlights are numerous. The delicious Helmeted Manakin occurs in most moist forested areas, the male's flame-red crest gleaming amidst the wooded gloom. Among antbirds, the most desired are Mato Grosso Antbird and Band-tailed Antbird, but don't overlook Planalto Slaty Antshrike, a recently split species in a taxonomically fascinating (for which read, complex) genus. 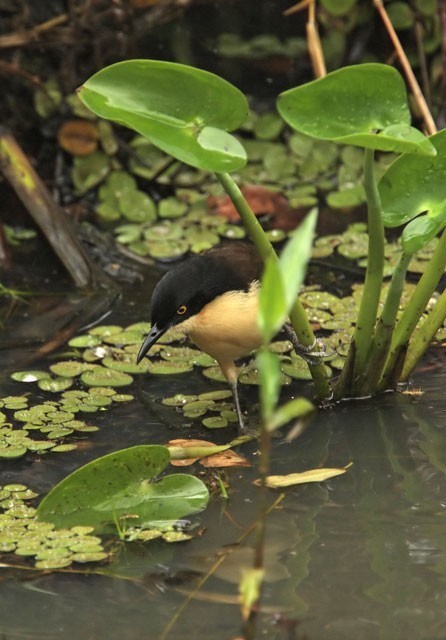 The Pantanal is great for wren-lovers, but it is only recently that birders with an ear for vocalisations cottoned on to the full range of Thryothorus wrens inhabiting the region. The trio to look for are Moustached, Buff-breasted and Fawn-breasted Wrens. But my personal 'crush' on the wren front is the Black-capped Donacobius. The reason? That it used to be a wren, but isn't any more! Formerly housed in Troglodytidae, this feisty wetland-dweller is now thought so taxonomically distinct that it merits its own monotypic family. 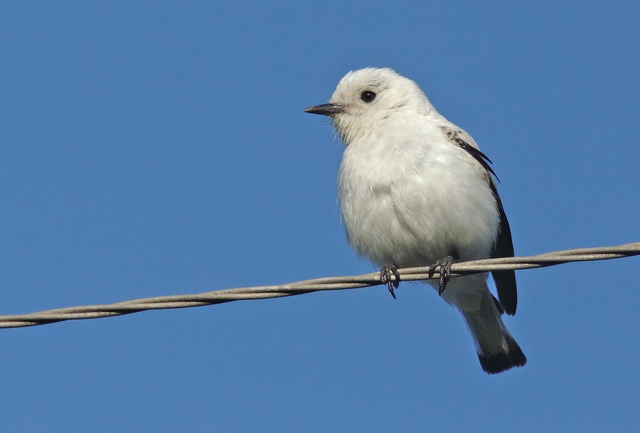 There are some 60 species of tyrant-flycatcher in the Pantanal, and they inhabit all habitats so the variety never ceases to amaze. I am particularly partial to the snowy temptations of the delicate White Monjita, as it fly-catches from prominent perches amidst open grasslands, but others prefer petite local specialities such as Rusty-fronted Tody-Flycatcher and Stripe-necked Tody-Tyrant. Elsewhere amongst the passerines, I never fail to be captivated by the cheeky Yellow-billed Cardinals, which often swarm around lodge buildings, entertaining you as you down a lunchtime beer or caipirinha. 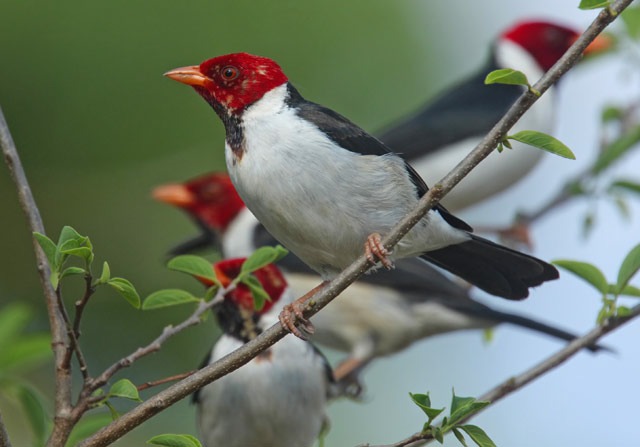 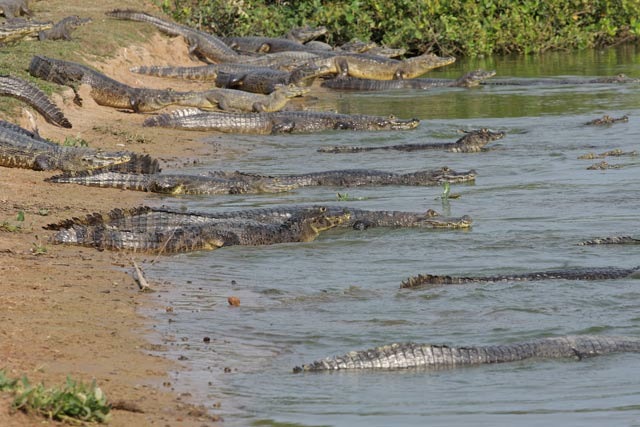 But the Pantanal is not just about birds. This remarkable area is also justifiably world-famous for its mammals (providing undoubtedly the best mammal-watching in the Neotropics) and "herptiles" (reptiles and amphibians; the massive congregations of Yacaré Caiman are one of the wetland's most iconic images). 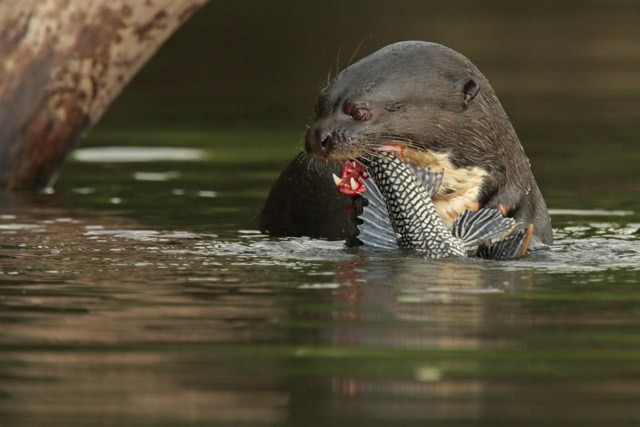 Where best to look for these elements of the Pantanal's wildlife experience is covered in Pantanal wildlife: a visitor's guide to Brazil's great wetland. But I will take the liberty of whetting the appetite with a selection of the large mammals that you can expect (yes, expect!) to see on a typical five-day trip into the Pantanal: two species of anteater, five species of monkey, Ocelot, Jaguar (there's no better place to see it!), Neotropical Otter, Giant Otter, four species of deer, and, finally, hundreds of the world's biggest rodent, Capybara. Enough to make even the most hardcore birder think more broadly.... 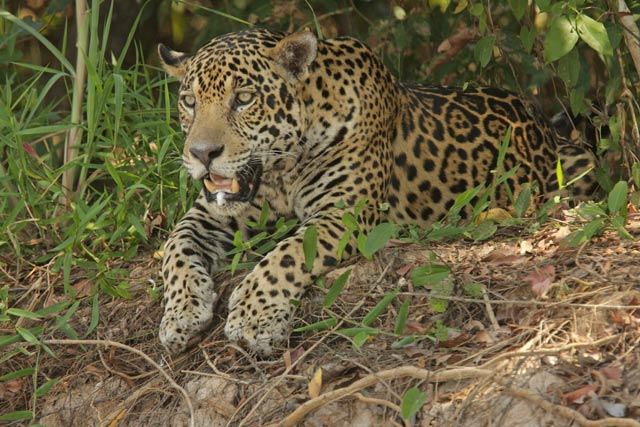 From a visitor perspective, the Pantanal divides up neatly into four areas, of which Brazil has two. In Mato Grosso state, take a trip along the Transpantaneira highway, a 100-mile-long road that crosses 125 rickety wooden bridges while traversing some of the world's finest wildlife-watching terrain. Around 20 lodges are dotted along the alternately dusty, stony and muddy road: a multi-venue trip enables you to cover all requisite habitats. To the south, the state of Mato Grosso do Sul offers fewer lodges and these are more widely spaced, making it sensible to focus on just one site and spend several days there.

For the more adventurous, try the Paraguayan Pantanal, where two lodges include one run by Guyra Paraguay, the country's BirdLife International Partner. And for those who wish to stray well off the birding track, chance your arm in the Bolivian Pantanal around Quijarro. For details on where to bird and stay, check out Pantanal wildlife: a visitor's guide to Brazil's great wetland. Despite the book's name, it covers Paraguay and Bolivia as well!

Pantanal wildlife: a visitor's guide to Brazil's great wetland will be published in late March by Bradt Travel Guides. BirdGuides readers can benefit from the special pre-publication price of £10.99 (RRP £16.99) by quoting reference 'pantbg' when they buy online from the Bradt website by 30th September 2010.