It can't have escaped any birder’s notice that for long periods this winter has been marked by extremely cold weather, with large amounts of snow and ice coating the country. Overall, Britain suffered the worst conditions since the notorious winters of 1978-79, 1962-63 and 1947.

The freezing weather caused a great deal of inconvenience to many, but also had dramatic effects on our bird life. The period of arctic conditions produced many unusual and exciting movements and observations, sometimes providing a once in a lifetime opportunity to witness familiar bird species pushed to their absolute limits, and often leading them into uniquely close and fearless proximity to people and their gardens.

The first signs of the approaching big freeze happened after a few days of heavy air frost and occasional sleet, when snow began falling in Norfolk and then all over the South-East on 16 December, as a cyclone generated by earlier North Atlantic storms began to make its presence felt. By 17th, this had spread to the Midlands, Devon and Dublin, and by the 19th depths of up to 13 cm had been reported as far north as parts of Scotland.

Cold winds and ground frosts meant that the snow remained unthawed in many places, and from 20th low pressure further maintained the wintry conditions, with combinations of freezing rain, sleet and snow hitting all of Britain over the following days. Temperatures remained low into the New Year, and the snow and ice largely stayed put even when precipitation ceased.

The beginning of January was the coldest in England and Wales since 1997, and the chillest in
Scotland and Northern Ireland since 2001, with prolonged frosts. Though there was little further snowfall, owing to high pressure covering Britain and Europe, many parts of the country endured temperatures below -10° C.

Mainland Europe experienced similar conditions, with snowfalls as far south as northern Spain and temperatures plummeting to -32° C in Switzerland. Worldwide, 16th saw a tremendous blizzard develop in North America, resulting in white-out conditions and record 24-hour snowfalls of up to 51 cm in many states. 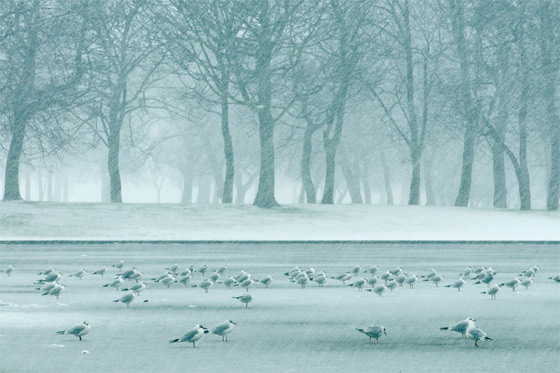 The freezing over of water bodies often forces gulls, like these blizzard-battered Black-headed Gulls, to roost on the ice itself. Photo: Steve Young (www.birdsonfilm.com)

In a British context, this global picture most affected birds by forcing them to irrupt from central and northern Europe. This was probably initially indicated by the appearance of greater-than-usual numbers of waterbirds such as Smew, including 38 at Dungeness, and Great Northern Diver on inland water bodies at the beginning of December. Though occurring at the expected time of year, the extra birds pushed into Britain were probably driven here by the unusually cold weather on the Continent. Gadwall, Common Teal and Eurasian Wigeon numbers also radically increased towards the end of December.

The onset of arctic temperatures produced almost unparalled movements and influxes of many of our common birds into gardens, as well as species typically unfamiliar to householders. Conditions were so bad that the RSPB issued a call to not approach wild birds, no matter how tame they seemed, as repeated flushing could burn up essential energy reserves needed to stay alive during the prolonged cold spell. 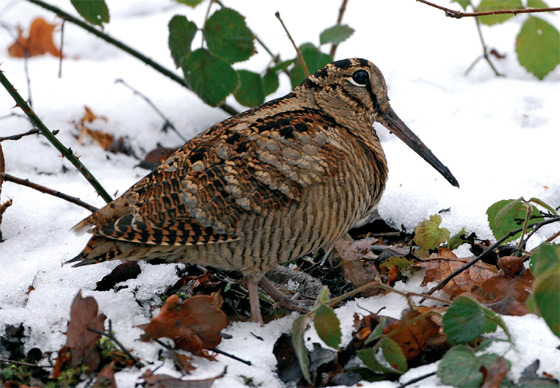 Woodcock (pictured) and Common and Jack Snipe all appeared en masse from the Continent, with record counts at coastal watchpoints. Photo: Richard Brooks

Chief among the surprises many awoke to on the morning of the first snow was an influx of Woodcock, Common Snipe and Water Rail. All were present in large numbers from woodlands to wetlands, and even appeared in many small suburban gardens and parks, like lone lost sentinels, as their muddy and marginal habitats became locked with ice and sealed by snow. High counts of the secretive Woodcock were possible in many eastern and southern sites; 60 at Gibraltar Point NNR, Lincolnshire, on 8th was but one example.

Redwing and Fieldfare numbers were obviously up, and they sought refuge in many gardens, even in the centres of major cities, especially where the berry crop remained uneaten by local birds; these were among 40 species which increased in numbers in the country’s gardens, according to the BTO’s Garden BirdWatch scheme. Many householders had never seen these two northern thrush species in their gardens before.

In the New Year, Fieldfare and Redwing were equally present in around 37 per cent of surveyed gardens instead of the usual 9 per cent, a presence reflected by our readers’ letters and emails. There were also surprising concentrations of species such as Corn Bunting, 738 of which were present on a farm in Stotfold, Bedfordshire, near the Herfordshire border, in January – around 4 per cent of the total British population (see sidebar). 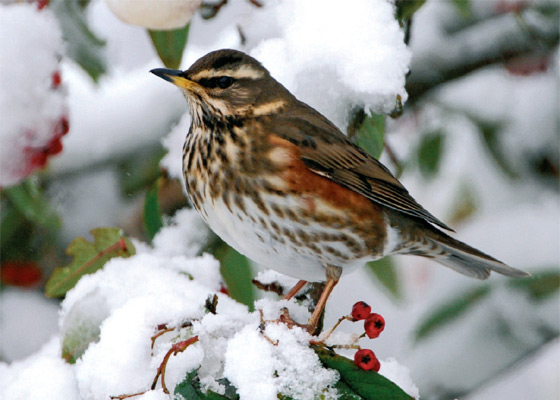 Redwing numbers seen in gardens were almost three times as high as usual this winter, with Fieldfare following close behind, but the weather kept them on the move as berry stocks were used up. Photo: Richard Brooks

Not only did the freeze-up produce interesting local sightings, but it also initiated an exodus of birds from the Continent of almost biblical proportions. Along with the thrushes, a huge wave of Skylarks appeared at the beginning of the year and was noted countrywide. Among the counts were 2,610 over Sunderland on New Year’s Day, heralding movements along the east and south coasts which continued all week, with passage maintained in some areas into the third week of January. Large numbers of Skylark, Woodpigeon, European Golden Plover and Northern Lapwing were noted in passage from just before Christmas, and a few of the last species even made it as far as Newfoundland!

Continental regions registered unusually high numbers of White-fronted and Pink-footed Geese and Great Crested Grebes, species which all made their mark at sites in Britain, while Whooper and Bewick’s Swans were on the move at the very onset of the cold. In the third week of January geese were still coming through, with good numbers of Pink-feet turning up away from their East Anglian headquarters, and southern inland sites registering numbers of Dark-bellied Brent and both Taiga and Tundra Bean Geese.

Less obvious domestically was the arrival of more Song Thrushes and Blackbirds from abroad, swelling the numbers of local birds and earlier migrants from the autumn. Chichester Harbour, West Sussex, logged an impressive 3,000 Skylarks, 42 Woodlarks, 33,000 Fieldfares and 12,000 Redwings on 6 January. On the same day, Hengistbury Head, Dorset, produced a mass movement of birds estimated at around 200,000 individuals, mostly Skylarks and plover and thrush species. Next day, an impressive 300 Common Snipe were counted at Thurlestone, Devon.

Other signs of the phenomenal passage were at Long Nab, Burniston, North Yorkshire, which had 4,100 Skylarks on 6th, while Durlston CP, Dorset, had 3,200 Skylarks, 5,600 Redwings and 34,100 Fieldfares (with 2,000-3,000 more of each the next day), and 30,000 Skylarks and 8,000 Redwings flew over Mudeford Quay in the same county. Heading south, many of the birds pushed out of the Continent by the low pressure were seen on the south coast, and 500 Reed Buntings and 400 Yellowhammers at Mersley Farm, Newchurch, Isle of Wight, were particularly notable. Such movements and gatherings were typical of many eastern and southern hot-spots. 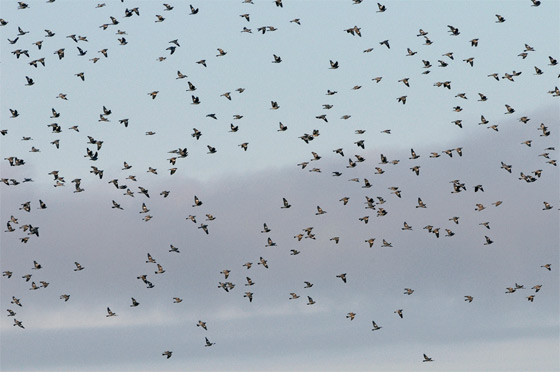 While more charismatic species are immediately noticeable, huge numbers of Woodpigeons were also noted on many days, travelling south to avoid the cold. Photo: Richard Brooks

The effects of the weather on the populations of resident native birds are unquantified at present, but we may well see decreases in warmer-climate species at the edge of their range, like Dartford and Cetti’s Warblers. Dartford Warblers lost 88 per cent of their numbers in the Thames Basin in the short cold snap of February 2009, and the prolonged harsh conditions this winter are likely to have a much worse effect. Similarly, the cold winters of the early 1980s almost put paid to the first wave of Cetti’s Warbler colonisation in eastern England, recovery taking several years.

Resident and newly arrived birds, particularly ground-feeding species, found that food sources were either depleted or completely hidden under ice and snow. The RSPB responded by encouraging its members to feed the birds. It also established emergency feeding stations for the recently increased populations of endangered Cirl Bunting and Bittern, attempting to feed the latter on sprats requisitioned from the seawater filters on the turbines at Sizewell B nuclear power station in Suffolk.

In the North-East, three regional bird clubs began ‘BirdAid’, and managed to secure a large amount of wheat for volunteers to distribute around farms in the region, helping out such species as Skylark, Tree Sparrow andYellowhammer. Skylarks in Newbiggin-by-the-Sea, Northumberland, were reduced to attempting to eat Oilseed Rape leaves, the only vegetation left at ground level above the snow. 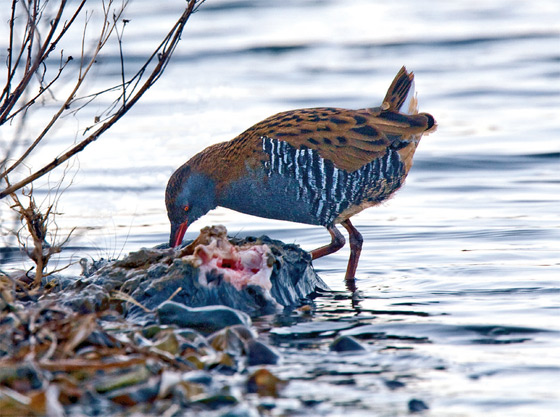 This Water Rail found a dead rabbit to its liking, but individuals were seen eating several different types of carrion as the ground and water became too solid with ice to forage. Photo: Howard Bottrell

The inaccessibility of food resulted in observations of odd or anomalous behaviour. Water Rails are legendary for their opportunistic feeding, and this cold spell produced sightings of them tucking in to both Meadow Pipits and dead Rabbits. Goldfinches were seen consuming sand grains from the mortar on a house wall in Berkshire; it is thought they were attempting to get grit to aid their digestion, rather like many cagebirds. However, there were many anecdotal reports of large numbers of large and small birds dead or dying, and numerous other observations of small birds approaching people in the wild as if begging for food.

As most migration had finished by the time of the bad weather, few rarities arrived with the cold. However, a couple of Black-throated Thrushes accompanied the second wave of Redwings and Fieldfares, and it is possible that a few wintering Ring Ouzels noted in the south also arrived at this time.

The Holarctic prevalence of extremely harsh weather has resulted in astounding mass movements of birds, and will have provided observers with numerous moving and awe-inspiring memories. It can only be hoped that the ensuing breeding season of 2010 will enable resident birds to recover quickly. 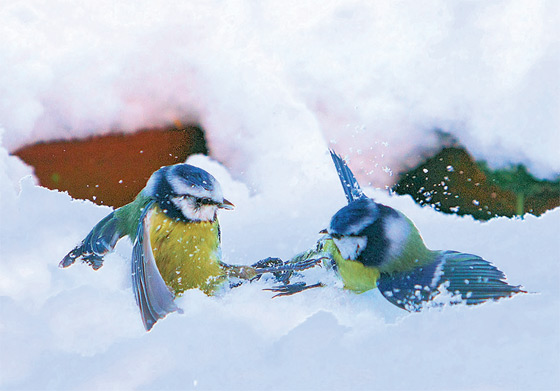