Tawny Owls in trouble in a changing world

Tawny Owls are threatened with long-term decline because environmental change is dampening the population cycles of their favoured prey, a new study in Global Change Biology has shown. If the situation continues, the owls will potentially slowly die out over the coming decades. Scientists analysed 27 years of data on owl populations and breeding patterns in Kielder Forest in Northumberland alongside the results of an earlier study. The latter showed field vole populations across Europe, which until recently fluctuated wildly from year to year, are becoming much more stable. 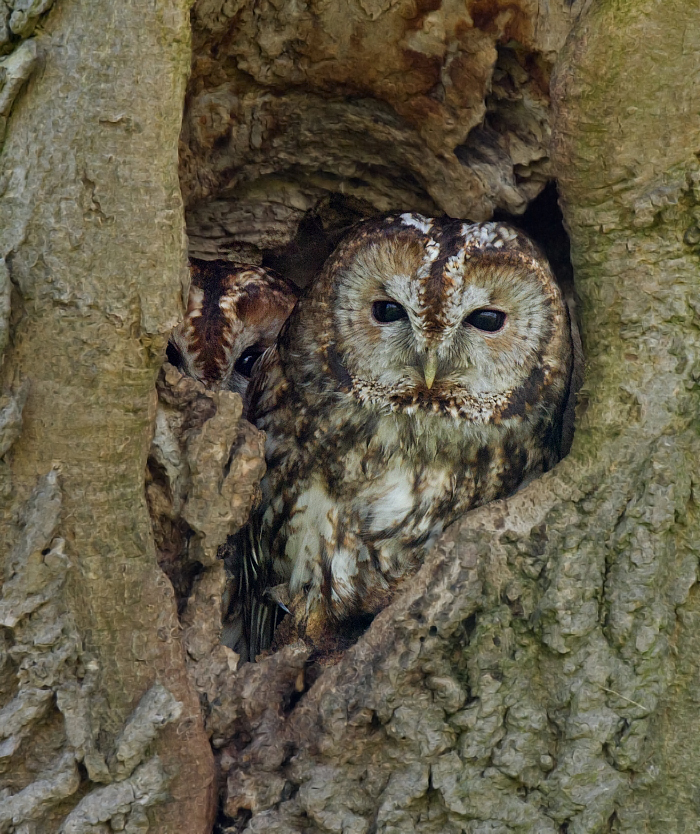 Voles are the cornerstone of the Tawny Owl's diet, accounting for some 62 per cent of their prey. They're so important that the owls often can't breed at all unless the rodent populations grow dense enough. Owls are therefore better off as a result of voles' cyclical population levels — with some terrible years and some plentiful — than in a constant mediocre vole supply, since the latter probably means few will ever manage to breed successfully. Scientists already knew that, like others across Europe, the Kielder vole population now varies less from year to year than it did until the 1990s. They suspected this would affect the voles' predators, but this study is the first conclusive evidence to support this. It shows that the impact of environmental change is cascading through ecosystems, affecting first herbivores, then the predators that eat them.

The decline is slow, and would be hard to detect simply by monitoring the number of adult owls. This is partly because an increasing number of owls from outside Kielder have arrived since the study began, helping mask the general drop in fecundity. It's also because the owls are so long-lived — 8–10 years on average, and in some cases up to 20 — so it takes time for the population to respond to a change in its ecosystem. But the researchers' population model suggests the ultimate results will be disastrous.

Professor Xavier Lambin of the University of Aberdeen, senior author of the paper, said: "The owl population is ageing, and unless regular vole outbreaks return they eventually will die out — although that could be decades away. It's just getting much harder for them to breed. For a sustainable population you need some years of plenty to create big age cohorts that then move through the population, but these years aren't happening any more."

Lambin's earlier research found that vole population cycles are declining all over Europe, and that environmental change is probably responsible. Many other keystone herbivores face similar fates; for example, there is evidence that populations of some plant-eating insects are fluctuating less than they were. Lambin says there will be huge implications for many other predators — for example, voles are essential not just for owls, but also for other animals including foxes, badgers, raptors, weasels and stoats. The most vulnerable predators are those whose breeding success is highly dependent on vole populations in winter and spring.

The abstract of the study is as follows:

Predicting the dynamics of animal populations with different life histories requires careful understanding of demographic responses to multifaceted aspects of global changes, such as climate and trophic interactions. Continent-scale dampening of vole population cycles, keystone herbivores in many ecosystems, has been recently documented across Europe. However, its impact on guilds of vole-eating predators remains unknown. To quantify this impact, we used a 27-year study of an avian predator (tawny owl) and its main prey (field vole) collected in Kielder Forest (UK) where vole dynamics shifted from a high- to a low-amplitude fluctuation regime in the mid–1990s. We measured the functional responses of four demographic rates to changes in prey dynamics and winter climate, characterized by wintertime North Atlantic Oscillation (wNAO). First-year and adult survival were positively affected by vole density in autumn but relatively insensitive to wNAO. The probability of breeding and number of fledglings were higher in years with high spring vole densities and negative wNAO (i.e. colder and drier winters). These functional responses were incorporated into a stochastic population model. The size of the predator population was projected under scenarios combining prey dynamics and winter climate to test whether climate buffers or alternatively magnifies the impact of changes in prey dynamics. We found the observed dampening vole cycles, characterized by low spring densities, drastically reduced the breeding probability of predators. Our results illustrate that (i) change in trophic interactions can override direct climate change effect; and (ii) the demographic resilience entailed by longevity and the occurrence of a floater stage may be insufficient to buffer hypothesized environmental changes. Ultimately, dampened prey cycles would drive our owl local population towards extinction, with winter climate regimes only altering persistence time. These results suggest that other vole-eating predators are likely to be threatened by dampening vole cycles throughout Europe.

This article has been adapted from the article by T Marshall on Planet Earth Online.