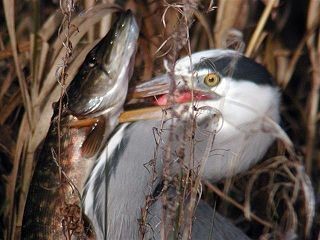 On the 26th January I was sitting in the new hide at Attenborough Nature Reserve near Nottingham, trying to take advantage of the sunshine to take some digi-pictures of Tree Sparrows on the feeders. My friend, Gordon Ellis, remarked that a Grey Heron had just walked onto the bank carrying a large fish which it had presumably obtained in the shallows which were partially obscured from our view by reeds.

I left the Tree Sparrows to check and was amazed to see that the Grey Heron had a large Pike, later estimated to weigh about 4 lbs, spiked onto its bill.

I was quickly onto the struggle with my telescope. The lower parts of the Grey Heron were obscured by reeds but the head, neck, and most of the fish, could be seen well when it was standing upright. Could I photograph the action though?

My digital camera is an old Nikon 880 which I use by pushing the lens into the eye-cup of my Nikon 82 Fieldscope. Once on the bank, the Grey Heron stood motionless, as if wondering what to do next, but eventually bent forward. We assumed that the Pike came off the bill as the Grey Heron was seen to jab it several times; Gordon commented that the fish was still alive at this time. 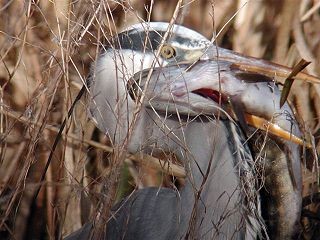 After a few minutes, the Grey Heron stood upright again and was seen to be holding the Pike, now motionless, crossways with the body and tail on one side and the head on the other.

The Grey Heron then bent forward again and must have been turning the Pike head-on in order to swallow it as it suddenly raised its head in the air and the Pike, which is a very streamlined fish, slid down the throat very quickly. This all took place too rapidly for me to photograph though my next picture shows the tail fin sticking out of its mouth. 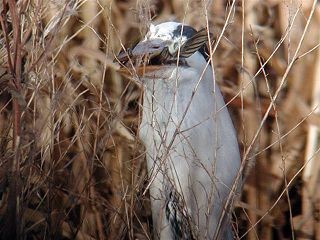 The neck was enormous for a while until the Pike slid down into the gullet and the Grey Heron remained on the bank for another 10 minutes before shakily flying low back towards the reedbed, presumably to sleep off the enormous meal!

Could this be good enough to be Piketure of the week?