Two different scientific techniques – one which allows researchers to collect detailed data on a handful of birds, and one which lets them collect more general data on a large number of birds – have been used to identify the wintering sites of Swallows (known as Barn Swallows across the Atlantic) in South America. The new combined approach has many applications to the conservation of migratory birds, says a paper in The Auk: Ornithological Advances.

Two complementary methods worked together in the study, producing more refined estimates of where individual Barn Swallows spend the winter. Using the methods separately comes with tradeoffs – geolocation lets researchers precisely track a handful of birds, while isotope analysis provides data for larger numbers but with less detail – but together, they provide a fuller picture of an intercontinental migration.

Swallows Hirundo rustica breed in North America and across Eurasia, but American birds belong to their own subspecies H r erythrogaster and winter in South America; they have rusty red underparts and an incomplete blue breast band, and have been mooted as a potential split form the Eurasian forms in the past. 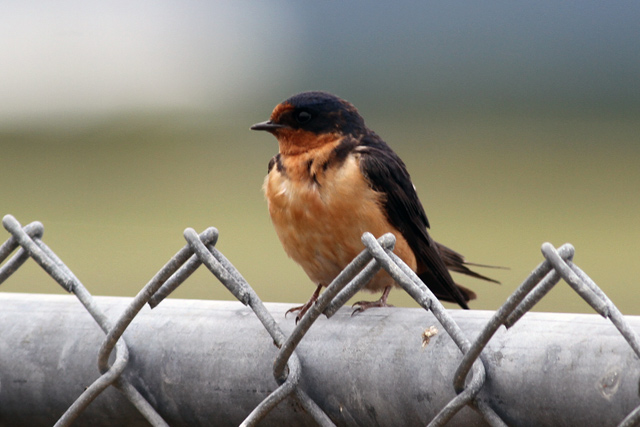 Like hundreds of other bird species, Swallows head south for the winter, to a broad area that encompasses most of Central America, the Caribbean and South America. Keith Hobson and Kevin Kardynal of Environment Canada were looking for a better way to determine where individual Barn Swallows were spending the winter months within this general range. Their solution was to combine isotope analysis, which involves sampling the isotopes of elements in birds’ feathers for clues about where the birds were when those feathers grew, with a geolocator study, where birds are fitted with small devices that calculate and record their location based on daylight – the catch being that the birds have to be recaptured when they return in order to download the data.

The proportion of hydrogen isotopes in water varies with latitude in North America, but this latitudinal pattern breaks down in South America. So, Hobson and Kardynal combined hydrogen isotope analysis with analysis of carbon isotopes, which revealed whether a bird spent its time in grasslands or forests, and sulfur isotopes, which are affected by whether a bird was on the coast or inland. In addition to collecting feathers from 208 Swallows for isotope analysis, they were able to recapture 14 indviduals with geolocators, helping confirm that the locations inferred from isotopes were accurate. Most of the birds in their study turned out to be wintering in open agricultural and savannah regions outside of the Amazon basin.

Understanding seasonal bird movements can be crucial for conservation. If birds that breed in a certain area also winter together in a certain area rather than spreading across South America for the winter season – a pattern known as migratory connectivity – then that segment of the breeding population could be wiped out by a single adverse event on their wintering grounds.

"The study nicely demonstrates the need to get away from the dichotomous thinking of pitting one technique against another. All are useful and all have their strengths and weaknesses if you take the time to understand them," says Hobson. "On a more serious note, we also need to remember that describing connectivity patterns is a ... preliminary step in using such information to help conserve species and populations. I think there is a tendency these days to move on after we have produced some pretty maps."