Stonechats: A Status Change in Lancashire

eb828935-e1b3-4247-b077-224f8efea237
In common with birders in many parts of the country, Peter Woodruff has noticed how much commoner Stonechats are now compared with just a few years ago.

I've been birdwatching for twelve years, increasing from an interest to the passion of today. My records appear to clearly indicate that prior to the year 2000 the Stonechat was undoubtedly uncommon, if not almost a rarity, in our region in the north of England. Although it must be said that learning over the years where to look for birds obviously makes contact more likely. Nevertheless, I do know that the bird was not to be seen then as it is today in anything like such numbers.

It is a well-known fact that mild winters play a major part in the survival of such birds which feed mainly on insects, and as a consequence of the recent run of mild winters the status of the Stonechat has changed for the better, and in my view, dramatically.

I wasn’t aware at the time, but the sighting of two Stonechats at Clapham in North Yorkshire on 27th November 1999 was the turning point in my record book for the upturn in the status of what has always been my favourite passerine.

There are two events in particular that stand out for me in this welcome change of fortunes for a bird species.

1 - Who would have thought the sighting of a male Stonechat on Birk Bank, just east of Lancaster in North Lancashire, on 21st May 2000 would in due course prove breeding to take place for the first time at this location in possibly as many as 20 years?

2 - I could never have believed the events later the same year on 30th September at Harrisend in north Lancashire on the fringe of the Trough of Bowland. Given the restrictions in force at the time due to Foot and Mouth disease, in the space of no more than 30 minutes from the road on foot, and covering little more than a half a mile, I counted an amazing 19 Stonechats. How many Stonechats could a place so vast, and restricted to the public, as the Trough of Bowland really hold?

Proof of this change in status must surely rest on the fact that I have recorded Stonechats at least once, and often in multiples, every month for three years since the record at Clapham in November 1999. I have recorded these at more than 16 different locations, most of which fall into our recording area in Lancashire. The best of these records are 19 birds on 30 September 2000, and 15 birds on 7 August 2002, both records at Harrisend. Another location at Birk Bank also turned up a good number of 14 birds on 9 September 2002. 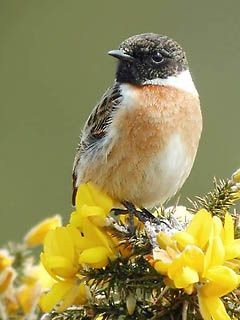 As nature itself has given a chance to the Stonechat, I wonder if man will soon change some of his policies to give the same chance to some of our other birds, in particular our farmland and upland species, which desperately need help, and fast.