Extraordinary co-operation by Sociable Weavers, which work together to build the largest nests in the world, is motivated by family ties, say the authors of new research published in Ecology Letters.

The study says the birds, which are found throughout southern Africa, are more likely to maintain the communal part of the nest if they have relatives living nearby. Dr Rene van Dijk from the University of Sheffield, one of the study's authors, compares the scenario to having lodgers to stay in the family home. "If the lodger isn't related to the family, he or she may pay rent, but they will not care too much about the upkeep of the house. However, if the lodger is a known family member, then you would expect them to maintain the house which he or she may stay in for a longer period and possibly inherit. It may seem like a small difference, but it tips the balance towards a more co-operative society." 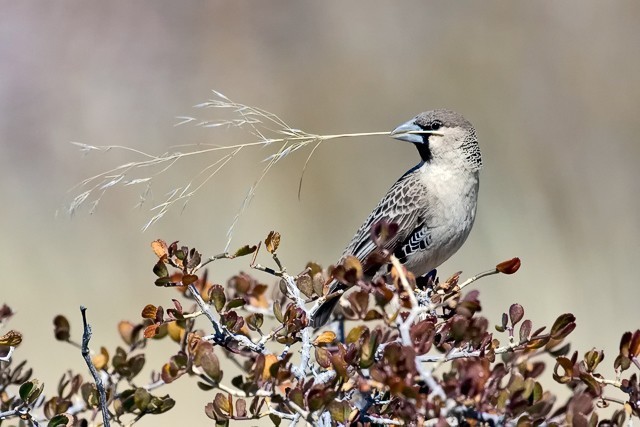 Examples of co-operation can be seen throughout nature, no more so than in our own species. But understanding the evolutionary causes of this behaviour remains a major challenge to scientists. While the interests of a group might be best served by working together, individuals within that group can often further their own cause by behaving selfishly, which creates a strong temptation to defect.

One potential explanation is that individuals contribute to communal activities to benefit their close family members and indirectly boost the survival chances of their own genetic material. To test this hypothesis, the team led by Professor Ben Hatchwell closely monitored 23 colonies of Sociable Weavers at the Benfontein Nature Reserve in Kimberley, South Africa.

Their enormous nests can weigh several tonnes and exist for decades, and each can house up to 300 birds in individual nest chambers. The chambers are embedded within a communal thatch, which helps to regulate the temperature inside the nest and provides extra protection from predators. The communal thatch requires separate building and maintenance to the chambers, which is mostly done by the males. However, the birds do not contribute equally. 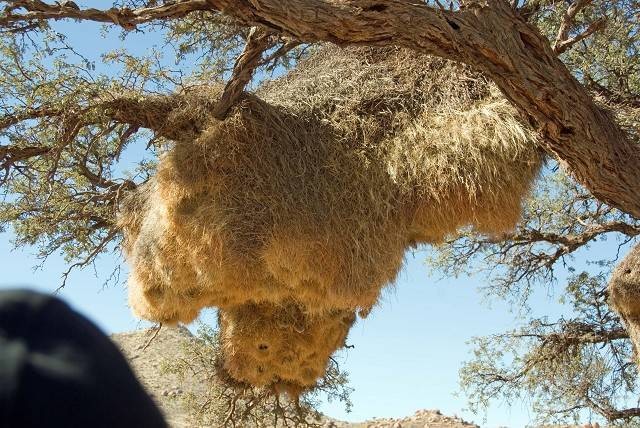 A genetic analysis revealed that the weavers tend to cluster in family groups within the nest. Those males with family living close by are more likely to contribute to building the communal area, whereas those living away from family are more likely to be freeloaders.

Van Dijk added: "Our research reveals one mechanism through which co-operation between individuals for communal tasks is achieved, but there may be other solutions to the same problem. In some cases, co-operative behaviour may be enforced by social conventions or laws. Failure to follow these can lead to a so-called 'tragedy of the commons', where society collapses because too many individuals are seeking to further their own interests. In terms of humans, global fish stocks are an example of a communal resource that depends on co-operation. If fishermen and their governments don't work together to agree on policies that are enforced, then global fish stocks will be exhausted and the industry will collapse."

The abstract of the study can be read below:

The tragedy of the commons predicts social collapse when public goods are jointly exploited by individuals attempting to maximize their fitness at the expense of other social group members. However, animal societies have evolved many times despite this vulnerability to exploitation by selfish individuals. Kin selection offers a solution to this social dilemma, but in large social groups mean relatedness is often low. Sociable Weavers (Philetairus socius) live in large colonies that share the benefits of a massive communal nest, which requires individual investment for construction and maintenance. Here, we show that despite low mean kinship within colonies, relatives are spatially and socially clustered and that nest-building males have higher local relatedness to other colony members than do non-building males. Alternative hypotheses received little support, so we conclude that the benefits of the public good are shared with kin and that cooperative investment is, despite the large size and low relatedness of these communities, kin directed.