The Snowy Egret breeds across the Americas, with the closest birds present from the northeastern USA south to northeastern South America. Northern populations are migratory and dispersive with many wintering from Florida south to northern South America. With such a migration pattern this species has long been predicted as a potential vagrant to Britain, a prediction supported by proven vagrancy to the Azores and Iceland.

Undoubtedly the rarity of the year, one was noticed by locals on the tidal creeks and pools at Balvicar Golf Course, 8 miles southwest of the town of Oban on the west coast of Scotland. Local birders Bill Jackson and Jim Dickson paid a couple of early morning visits to the site and on 5th November saw the bird in question. Clearly an egret, it was initially suspected of being a Little Egret and Bill alerted us at BirdGuides that it was "a very good record for Argyll". 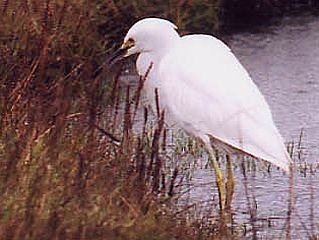 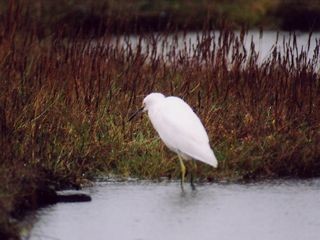 Bill took some excellent photos (above), and later in the day sent these to Nottinghamshire birder Andy Adcock and ourselves, by which time Bill and Jim had begun to question the initial identity of the bird that they had seen in poor conditions earlier in the day. Andy phoned BirdGuides staff to say he thought the bird was probably a Snowy Egret, rather than a Little Egret, as the pictures were being downloaded at BirdGuides; Phil Palmer was in no doubt about the identification as soon as he saw the face pattern, having seen thousands abroad. The bright yellow noseband is a good feature at this time of year. Andy reminded him that although they were sure in their own minds, some features such as the legs were inconclusive from the photos and these needed to be ‘checked out’ thoroughly. Also, Phil was just heading off to give a slide show at a local bird club, so was unable to check literature. Andy again spoke to Bill, who had also been working on the identification puzzle and both had come to the conclusion that the bird was indeed a Snowy Egret. Thanks to the world of instant communication the photos were dispersed to leading birders around the country by the evening and all were in agreement regarding the identification. By the time Phil had returned from his slide show, the consensus was that the bird in question was indeed a Snowy Egret and news had already been released stating the solution to the puzzle.

Although the pictures were widely distributed, many birders held slight reservations and so only four carloads of birders were on site at dawn the following day. The thought of the long drive northwest to be on site for first light also reduced observer numbers. Some birders were so keen that they began scanning the estuary before it was light. The bird was not by its favoured golf course pools and was found two hours later in a sheep field, feeding in a manner more akin to Cattle Egret. By now there were about 50 birders and they enjoyed the bird in good light, but it was slightly distant.

It then took off and headed for the golf course where it settled into a pattern of disturbing the riverbed with one foot before stabbing the fish that it had flushed. Having devoured several fry and a small flatfish, it approached observers to less than 20m, but by lunchtime many birders had already started the long return journey south.

The identity was confirmed and the bird was aged as a 1st-winter. It transpired that locals had seen the bird for several days (at least 9) and some had photographed it. It is still present today (the 13th), and one can only speculate for how long it might remain in the area. Presumably a product of the some of the quick-moving depressions crossing the Atlantic earlier in the autumn, it makes you wonder how many other mega rarities turn up in the scantily populated and severely underwatched west coast of Scotland. Would-be finders of British megas who wish to avoid the crowds might be well advised to head northwest during future autumns in search of a mystical ‘First for Britain’. Congratulations to Bill and Jim for alerting the birding world to the bird and for keeping the information services supplied with information during the night of the 5th November – fireworks indeed!!

Now that many will be better acquainted with the subtle identification criteria for separating this species from the similar Little Egret, no doubt more will occur in the coming years...