Smew: of 'white nuns' and 'redheads'

It's mid-winter and you've already had to set the alarm 20 minutes early just to sit out the car's gradual de-glaciation while vacantly listening to some radio breakfast show. Now, scanning across the twinkling dawn surface of an old gravel pit, the search begins, into a gentle breeze which still has enough bite to water the eyes. A flash of white emerging from a secluded corner resolves into a small grey duck with a bright chestnut crown and white lower face as it paddles proudly into the open, a procession of four others in her wake. Members of the spirited sorority dive now and again after dipping their head under the ripples to scout for prey, vanishing a good while in each pursuit of some tiny fish which, if hapless enough, will emerge in the serrated grip of its detainer's bill. Out of nowhere, like the most sublime marble, an adult drake surfaces and bobs gracefully towards the bank, just close enough to see the fine vermiculations on his flanks, as well as the perfectly aligned bold black bars and mask, and so the day is already made.

A group of Smew is always guaranteed to brighten a winter day's birding (Photo: John McInnes)

Gravel pits are a favourite winter retreat for Smew reaching our shores, but they will readily take to other sizeable bodies of freshwater, from reservoirs to gently flowing rivers, though anything deeper than six metres probably won't hold them for long as chasing down prey at such depths is a little ambitious for them. Brackish habitats can also be used occasionally, but tend not to become traditional sites in the way that certain freshwater lakes do. It is easy to forget that when this smallest of the sawbills disappears in the spring, it is to commandeer old Black Woodpecker nests and other tree cavities in the taiga zone of northern Scandinavia and Russia, from which its brood of around eight ducklings will later launch themselves into the world.

In its quest for unfrozen water, Smew moves south and west for the winter, but it tends not to venture any further than is necessary. The birds that we welcome to Britain for the colder months are but a meagre fraction of the European wintering population and are effectively overspill from the greater concentrations which make their way to the Netherlands. Most of these birds are 'redheads' — female or first-winter birds, which tend to winter further west, perhaps because their smaller size puts them at a competitive disadvantage to the bolder adult drakes, or 'white nuns' as they are known fondly for the appearance of having a white hood. From Germany eastwards and across the south side of the Baltic, adult drakes prevail and enjoy the benefit of the breeding grounds being within easy reach, in order that they can lay fast appropriation to the best breeding sites come the spring. 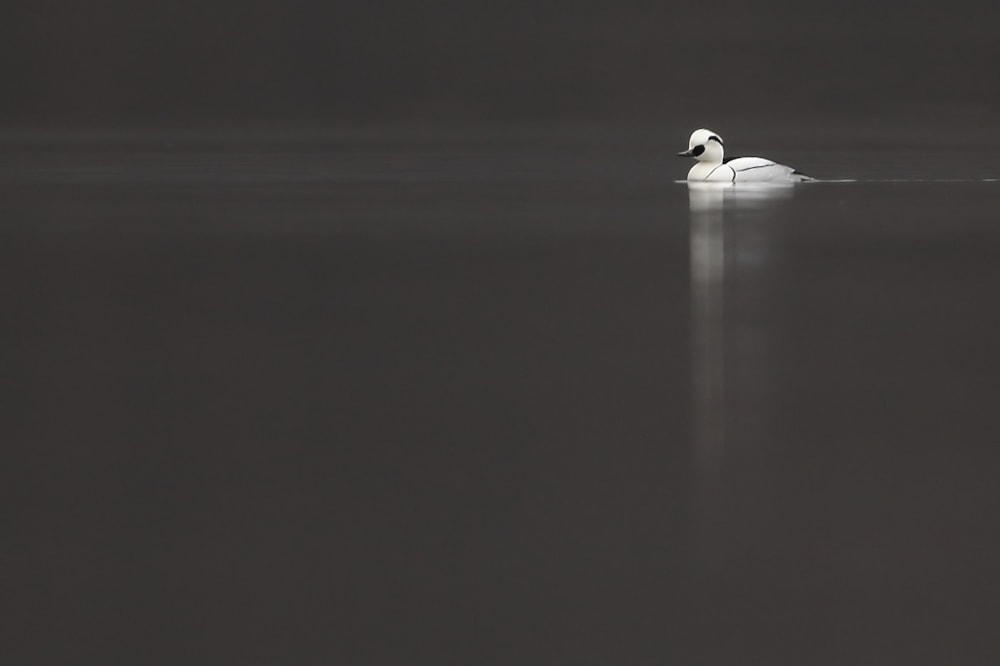 There is an immaculate beauty to adult drake Smew, or 'white nuns' as they are fondly known (Photo: Sam Northwood)

There is a clear and unsurprising preference within Britain for wintering sites to be towards the south-east end of the country and it is rather thin on the ground in Ireland. Smew that travel as far west as Britain and France for the winter can arrive in November, even October. However, many only pitch up in December and into January, when numbers usually peak, and this effect is amplified following harsh weather on the continent, freezing lakes over and pushing these fine ducks to the refuge of our generally more forgiving conditions.

British birders today are familiar with Smew as a celebrated, scarce visitor, but there was a time when it was a far more prolific element of our winter scenery. Having increased significantly during the first half of the 20th century, wildfowl counters in the south-east of England between the '40s and '60s could find themselves devoting a significant portion of their day to tallying Smew. At this time, the London reservoirs hosted around 30 per cent of British wintering birds, churning out counts such as the British record of 144 birds, at Brent Reservoir on 28 February 1956. Other mind-blowing totals include 125 at Walton Reservoirs in the winter of 1948/48, 124 at Walthamstow Reservoir on 4 March 1963 and 85 at King George Reservoir on 3 March 1956. Abberton Reservoir also had 113 on 22nd February 1954 and an average peak count of 92 between 1952 and 1956. 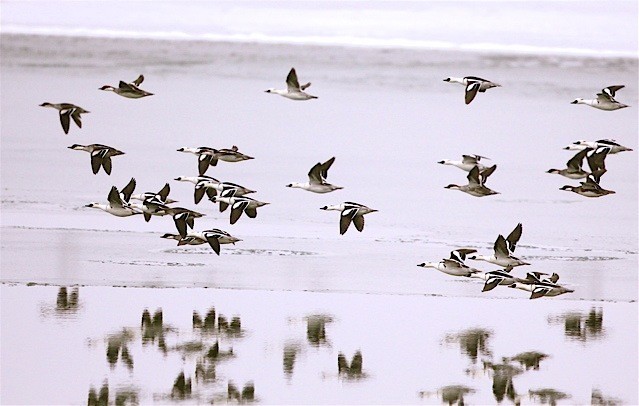 Flocks of Smew, like this one photographed in Denmark in February 2010, were a regular sight in the south-east of England in the mid-20th century — nowadays such a number is virtually unheard of (Photo: Morten Scheller Jensen)

Scatter any of the counts from the glory days of the '50s across the whole of Britain now and you wouldn't be far shy of a match to our current total wintering population. Work over the winters of 2004/5 and 2008/9 came up with an estimate of 170 Smew visiting our shores, a full 200 short of the figure for a decade earlier, and there has been an overall fall in numbers since the '60s, aside from the odd stopgap boost presumably linked to adverse weather. However, there is no indication of a great crash in the wider European wintering population of roughly 75,000 birds, despite deforestation and American Mink being blamed for problems in certain breeding areas.

As it turns out, what is lost at the western limits of the wintering range of Smew has been gained further east. The rapid drop in the numbers we see wintering in Britain appear to be a symptom of redistribution within the winter range as milder conditions linked to climate change leave more areas ice-free. This has allowed Smew to get away with holding back from moving so far west for the winter and so they have opted to embrace the opportunity by staying closer to the breeding areas; there have been rapid increases noted in southern quarters of Scandinavia, for instance, with Finland experiencing a 4,483 per cent growth in winter abundance between 1990 and 2011. This decade, one third of the entire Smew population winters in north-east Europe, against just 6 per cent in the '90s. 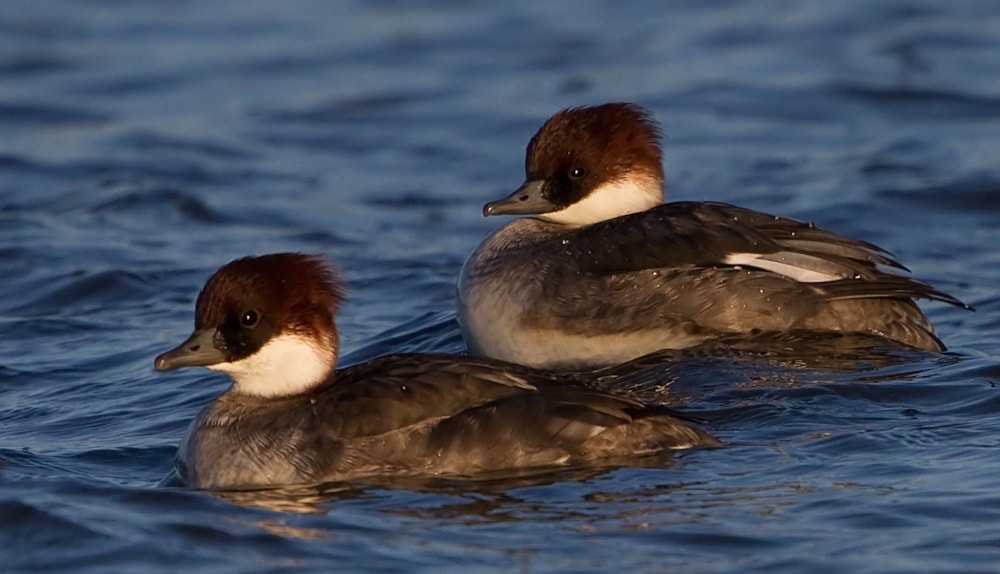 Even the more numerous 'redheads' are becoming increasingly difficult to locate in Britain and Ireland each winter (Photo: Nick Brown)

This shift in range brings with it conservation concerns, as 80 per cent of the Smew wintering in Latvia and Sweden, and most of those in Finland, reside in unprotected areas, so it is important that networks such as Special Protection Areas are reviewed to keep pace with shifting distribution as part of the conservation movement's reaction to climate change. That way, the future of the Smew will be secure and we will be able to enjoy this unique and simply beautiful duck for generations to come. Hopefully, our complexes of gravel pits and reservoirs will long abide in their attraction to at least some, as winter British birding would not be quite as enrapturing without the occasional Smew. 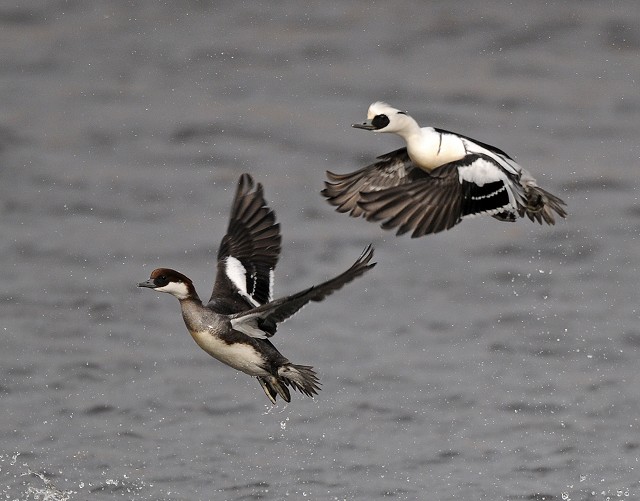 A pair of Smew erupts from the water at Minsmere, Suffolk, in February 2011 (Photo: Jon Evans) 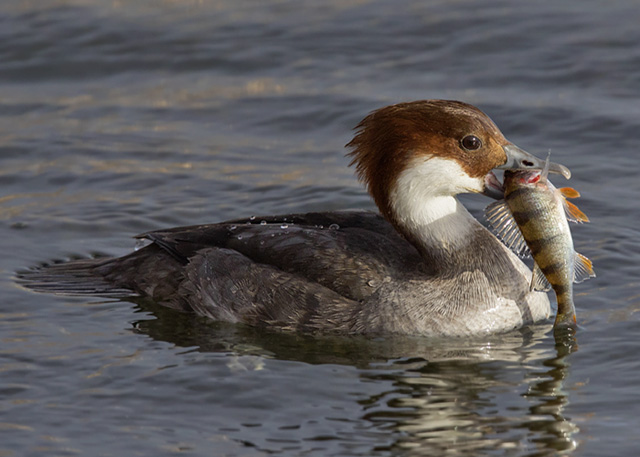 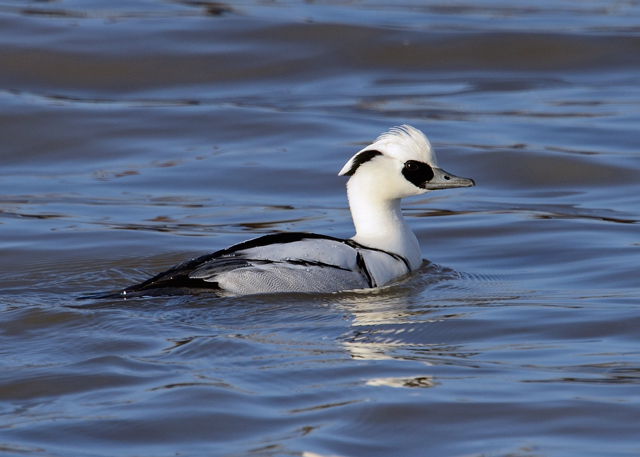 Self, A. 2014. The Birds of London. Bloomsbury Publishing Plc, London