"Paul, I've booked us two seats on the chopper!"

The excitement in Andy's voice told me all I needed to know. It was lunchtime on 25th October 2004 and I was still digesting the newly appeared red exclamation marks next to the words "Ovenbird" and "Scilly" on my work computer as the phone rang. Game on! 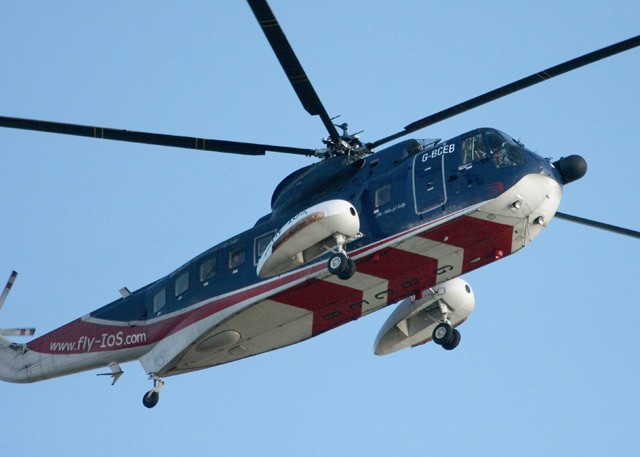 So began our pilgrimage to that cherished archipelago, a journey familiar to many. All will have different personal milestones on that headlong rush westwards. For me it is headlights sweeping the A30 in the pre-dawn darkness of an October morning, but that is only part of it. It is mainly unloading the car under the wind-tossed Cordyline palms outside British International Helicopter's Penzance departure lounge. It is stretching tired limbs and breathing in that heady aviation fuel as the Sikorsky S61 warms up in the heliport's first grey light. And it is an anxious glance skywards, hoping that the heavens are still starless; hoping that the bird has 'stuck'.

Of the ways to reach the islands, our preference for the expensive helicopter service was founded largely in pragmatism; we shrugged off the cost, knowing that unless the weather really deteriorated the big Sikorsky would get us across, even when fog or high winds grounded the Skybus planes at Land's End. But personally there was always more to the attraction: the big blue and white craft felt glamorous and exclusive — what other hobbies include travel by helicopter? But those flying today — 31st October 2012 — are the last so lucky. Today is the last day of the scheduled service; 50 years of flying is coming to an end. You may have read the reasons elsewhere and from this distance the service's demise appears to be a mire of politics, planning and commerce. From now on the only options for visitors and islanders alike are the weather-prone Skybus or the ageing, seasonally scheduled Scillonian III ferry.

Crossing the concrete apron through the thundering of rotors to the waiting machine, I hold onto my cap. Fed on a boyhood diet of M*A*S*H episodes and later Vietnam films, I have to fight the urge to adopt a military crouch. A sudden downrush of hot air directly under the blades and then I am in, fastening my seatbelt. The heliport gulls, with a snowy-winged adult Mediterranean Gull among them, scatter as we rise above Penzance, feeling the nose dip extravagantly before we level out and clatter off westwards. With low October sunshine angling in through the portholes, and already too hot in my coat, I peer down at the ginnels and crannies of the toe of Cornwall, all seemingly overflowing with verdant cover. From this vagrant's view of landfall and potential safe haven, I always ponder on what must dive in and be missed down there. And then — it really is fast — we are out over the sea, away past the pinnacle of Cape Cornwall, over familiar white-tracked footpaths and wave-fringed Land's End. Out over the sea, with white-flecked waves and the occasional white bullet of a gannet arcing past, tiny from this altitude.

Passing above Scillonian III, on its somewhat slower crossing to Scilly (Paul Pearson).

In the din of the cabin it is too noisy to talk. I look over the companionway at Andy, raise my eyebrows and we grin with anticipation and delight. And all the sweeter: our friends, missed of course, are stuck at home flying their desks. Soon I start to alternately crane my head to my window and peer between the epauletted shoulders of the crew towards the restricted view of the cockpit windscreen, anxious to catch my first glimpse of the archipelago. Finally, there it is: the familiar island shapes foreshortened. Alone in this bubble of noise, I inevitably gaze down onto the islands as we make landfall and revisit past sightings: that's where the so-and-so was and there's the wall the such-and-such jumped up onto. We all have our own versions.

The sweep of Porthellick looms large and suddenly after just 20 minutes we are low over the airport — cue a cursory check for Buff-breasts — and we touch gently down. We seem to have only just picked up our bags and tripods when the next batch of passengers have boarded and the great ship, its riveted sides gleaming, lifts away again, the cycle continuing.

But no more. Birders on Peninnis will no longer look up at the sound and see the piebald shape labour past against the monolithic form of Pulpit Rock, rotors echoing off the hillsides. The azure October skies will be quieter, like the no-fly Sundays before today. I always enjoyed the feeling of isolation and possession on those single days of peace, the sabbath quiet unbroken by the racket of rotors, when the islands were, for a little while, our own.

Shortly after, away across the island, a group of excited birders crowd on the seaward side of a small belt of pines. As we hurry forward, someone, one of the tribe, grins and makes a small pointing gesture downwards towards a movement in the bed of pine needles. We join them, close the circle and raise our binoculars. Lost waifs like the Ovenbird and the others to come that will fire our collective imaginations and inspire our own displacement will still find their way to these magical islands, quieter now, despite the challenges of chance, distance, climate and opportunity. So will I.