Widely anticipated as the birding autumn develops is Barred Warbler, particularly on the coast. Though only a scarce migrant in numbers, the species is notoriously skulking and consequently digging one out of the windswept scrub is a real achievement. The species can show up inland, but it is the Northern Isles and east coast that receive the vast majority of records, generally between late August and mid-October.

Barred Warbler is a large, long-tailed Sylvia, and the individuals seen in Britain are overwhelmingly immatures in autumn. These often announce themselves by a loud scolding rattle, somewhat akin to House Sparrow, or occasionally a quieter Common Whitethroat-like wheezy tchair alarm call.

Once heard, look out for what can appear to be a bulky Garden Warbler, but with a scaly rump, barring on the hind flanks and undertail coverts (which can look quite spotty from the rear) and a greyish wash to its overall sandy-brown plumage. Its wings are also well delineated by pale buff fringes, particularly on the tertials, and there is the impression of a wing-bar at the tips of the greater coverts. The primary projection is very long, emphasising its status as a long-distance migrant.

There is a faint supercilium arched over the dark eye, and the ear coverts are slightly darker than the rest of the head. The beak is quite strong and almost thrush-like, with a pale base to the lower mandible which can be notably pink tinged.

Adults are rare but do occur, and are notably barred underneath – especially in the male – and grey-brown on the upperparts, conspicuously blue-grey in the male. In the female, the underparts barring takes the form of diffuse dark chevrons with a plain off-white belly, along with an almost white throat, but the male’s barring is dense and continuous both across the underparts and along the bird’s length, in a pattern recalling that of adult Sparrowhawks.

Females have a pale iris, but this is strikingly yellow in males, which also have obvious white tips to their tail feathers, fuller on the outer feathers though absent on the central pair, and often prominent when the bird is seen from behind when flushed or in flight. A double wing-bar is apparent in both sexes, and the tertials are also tipped with white ‘fingernails’ in males. 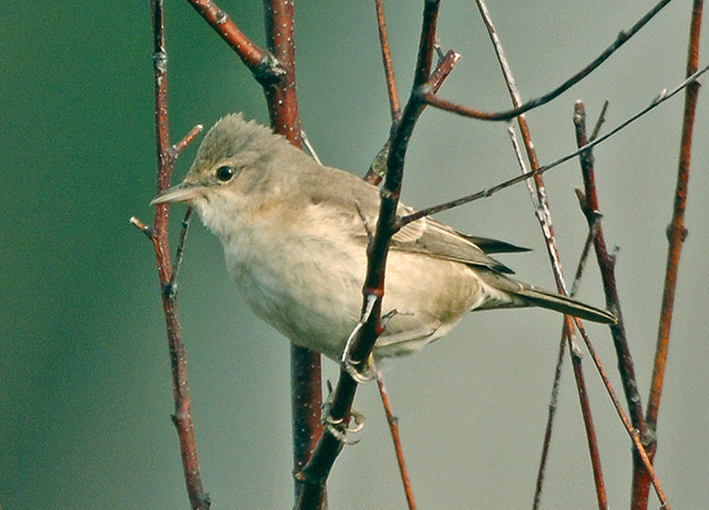 First-winter Barred Warbler (St Mary’s, Scilly, 7 October 2007). Even from this
underside view, the buffy edges to the flight feathers and the chevrons on the undertail
coverts are plainly visible. Photo by Steve Young (www.birdsonfilm.com).
Content continues after advertisements
Login to leave a comment
Return to List