This is the early-summer news update for SeaWatch SW 2008, including a summary of UK Balearic Shearwater records between 1st January and 31st May 2008, and a final call for observers for the SeaWatch SW survey this summer. Further details can be found on the SeaWatch SW website: www.seawatch.org. 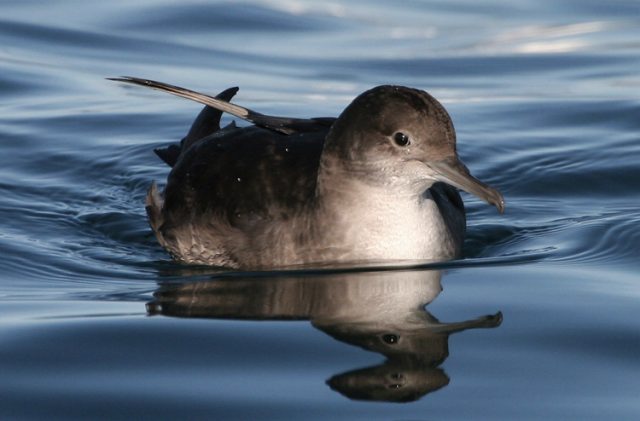 One of the main aims of SeaWatch SW is to provide a central point for Balearic Shearwater recording in UK waters; this will allow us to put project results into a national context. The 2007 results are already feeding into ongoing conservation efforts led by RSPB and Birdlife International. We are grateful to all observers who provided us with 2007 records, and urge anyone who sees a Balearic Shearwater in the UK in 2008 to contact us with details of the sighting, and/or submit their record to BirdGuides. We have already received over 130 records up to the end of May, roughly double the number received to this point in 2007.

SeaWatch SW gears up for 2008 survey

Due to the continuing support of our sponsors and volunteer observers, SeaWatch SW will continue to run a full programme in 2008. As well as co-ordinating the recording of Balearic Shearwaters in UK waters throughout the year, we will again be surveying all marine wildlife offshore of the Gwennap Head watchpoint (near Land's End in Cornwall) from 15th July to 15th October. We will also be collaborating with Marinelife in boat-based survey work off south and southwest England for the second year running. Have a look at our 2007 annual report (available to download from the project website) to see what we discovered last year, and volunteer to get involved this summer if you haven't already!

Thanks to a great response from our volunteer observers, we have coverage for about 90% of the 93-day survey period by experienced seabird observers, with supporting marine wildlife observers for about 80% of the period. This is therefore a final call for volunteer observers to fill the remaining slots. One or more seabird observers are required for the period 4th-13th September only. Volunteers must have previous experience of Balearic Shearwaters and other migratory seabirds and, in return for recording all seabirds seen during a full day of observation, core seabird observers are provided with free 'bed and brunch' at Ardensawah Farm B&B, a short walk from the Gwennap Head watchpoint. Supporting marine wildlife observers need no prior experience and most available slots are in August and September. Although accommodation is not provided, this is a great opportunity for students and conservationists who want to get experience of marine wildlife observation and recording. Further details and a provisional schedule can be found on the 'Get Involved' pages of the project website.

This year is already shaping up to be very interesting for Balearic Shearwaters, and it appears that the species is now essentially resident in small numbers off southern England. Unprecedented numbers lingered into January and February off southwest coasts, and small numbers continued to be seen throughout March and April. After a lull in early May, small numbers of 'returning' birds were again seen off southern England from 21st May onwards. The peak count this winter was up to 50 birds off Portland Bill on 13th January, a winter record count for the UK. Monthly summaries and distribution maps can be found on the 'Results' page of the project website.

SeaWatch SW data are helping conservation organisations in the early stages of planning for Marine Protected Areas off southwest UK. Finding Sanctuary is a partnership charged with establishing a network of marine reserves in the region, following legislation laid out in the proposed Marine Bill. SeaWatch SW data are helping to establish key species and locations that are priorities for protection. Examples include concentrations of moulting Balearic Shearwaters off Portland Bill in mid-summer, and feeding Basking Sharks and cetaceans over the Runnelstone reef off Gwennap Head.

Cornwall Wildlife Trust is joining forces with SeaWatch SW this year in a study of Basking Sharks off southwest Cornwall. In addition to the regular survey off Gwennap Head between mid-July and mid-September, we are hoping specifically to record Basking Sharks there from mid-June onwards, and also monitor one or two other sites in southwest Cornwall between 15th and 31st July at the same time as Gwennap Head is being monitored. The aim is to better understand how tide and seafloor topography affects the time and duration that Basking Sharks appear at the surface. The call for observers, including results from SeaWatch SW 2007, was recently featured on the BBC News website.

We recently advertised for an experienced marine wildlife observer to join us during a scientific expedition to the northeast Atlantic this autumn. From 1st September to 7th October the flagship of the UK research fleet, RRS James Cook, will be working offshore between the north Biscay margin and the Canary Islands as part of a geological research expedition. The marine wildlife observer will be responsible for recording all seabirds and cetaceans during the trip, and providing daily updates for the SeaWatch SW website. Of those who applied, two stood out as being particularly strong candidates. After some deliberation we were delighted to offer the place to Ken Shaw, one of the UK's most experienced seabird observers and a previous supporter of SeaWatch SW. Well done to Ken, and thanks to all who applied. Watch this space to see what we discover!

We are pleased to announce that Alice Jones will be joining the SeaWatch SW team this autumn as a NERC-funded PhD student, sponsored by SAHFOS. Alice will be using SeaWatch SW data to investigate how environmental and biological factors affect the distribution and occurrence of migratory marine apex predators off southwest England. We are also pleased to welcome Rachel Evans and Kathryn Driscoll, who are undertaking research projects this summer on Basking Sharks off Gwennap Head. Finally, thanks to Rafe Holmes, Leire Ordorika, Steph Hinder and Cecile Chauvel, who supported the project in 2007 as part of their Masters research projects.