A new study suggests the crucial importance of sea ice in determining the wintering range and migration timings of Ivory Gull in the Davis Straight, south-west of Greenland.

Very little is known about Ivory Gull's breeding biology or habitat needs in Canada nor of its habits away from breeding colonies, though the Canadian population has declined by over 70% during the past three decades. Because of its year-round affinity for ice habitats, Ivory Gull is considered an excellent bioindicator of the effects of global warming — rather in the same manner as Polar Bear, which has also suffered population crashes in recent decades.

The study attached satellite transmitters to a dozen Ivory Gulls on Seymour Island, Nunavut in 2010. Data was collected between July 2010 and June 2013, though the solar-powered transmitters suffered 'blackouts' between November and January due to the lack of sunlight at such high latitudes in mid-winter.

With the area largely inaccessible in winter, the suspected wintering range of the species has been speculative, based on intermittent observations and a single winter survey. The results from this latest study confirm that the Davis Strait and Labrador Sea area form the main wintering grounds for Seymour Island Ivory Gulls, as in the case of Russian, Greenland and Svalbard populations. 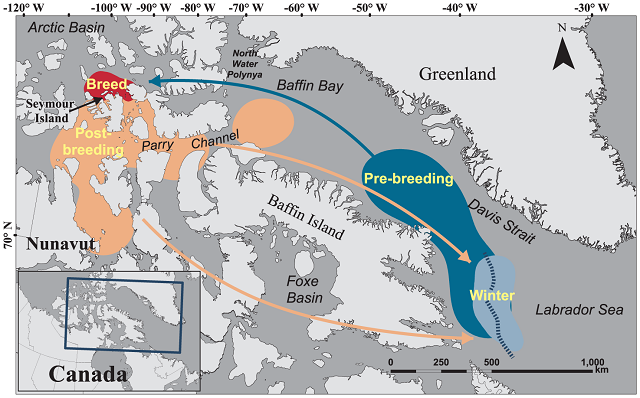 Annual distribution of Canadian Ivory Gulls.
The 50% kernels represent distribution during breeding (red), post-breeding (orange), winter (light blue) and pre-breeding seasons (dark blue). General direction of post-breeding migration is indicated by the arrows (south via Davis Strait and Foxe Basin in orange) from 'post-breeding' to 'winter' and direction of pre-breeding migration is indicated by the arrow (north via Davis Strait in blue) from 'pre-breeding' to 'breed'. The dashed line through the winter kernel represents a composite of the typical edge of the pack ice, 2010-2013, from December through April. (Source: Spencer et al.).

The study also found that spring migration was comparatively short, with autumn migration sometimes taking up to four times as long as in spring. The gulls moved west of the receding sea ice in May of each year of the study, returning to the breeding grounds where ice was still heavily concentrated.

Given that the findings demonstrate a strong affinity for sea ice, future reductions in both its summer and winter extent could prove severely detrimental for Ivory Gull populations both in Canada and elsewhere and ultimately it will be the gulls' adaptability and resilience that defines their future.