Researchers have used information about seabird colonies and food availability to create a mathematical model that predicts where they forage for food during the breeding season. The results will help conservationists and governments work out where to place new Marine Protected Areas to safeguard important feeding grounds and other seabird hotspots. The model could also be used to explore the effects on seabird populations of fisheries, pollution, offshore developments like wind turbines, or environmental change. "Globally, seabirds are becoming endangered at a faster rate than any other group of birds," says Dr James Grecian, who carried out the research for his PhD at the University of Plymouth and is currently based at the University of the Highlands and Islands in Scotland.

According to Dr Steve Votier, lecturer in marine ecology at the University of Plymouth and Grecian's PhD supervisor, "we need to link important conservation areas at sea with land-based protection. This is particularly important for seabirds, as they spend very little time on land." Falling seabird populations will benefit from the network of Marine Protected Areas, or MPAs, being established by the UK government to protect marine ecosystems from human activities such as fishing. Yet it can be difficult to pinpoint where an MPA targeted at seabirds would do most good, as breeding seabirds often travel hundreds of kilometres from land in search of food. Existing techniques such as satellite tags or visual surveys from ships can help researchers track the birds, but many species are too small to carry tags and some are particularly difficult to find at sea. So Grecian, Votier and colleagues took a different approach: instead of directly observing the birds' movements, they decided to use a computer to replicate the distribution of seabirds using their knowledge of seabird colonies, feeding habits and other behaviour. 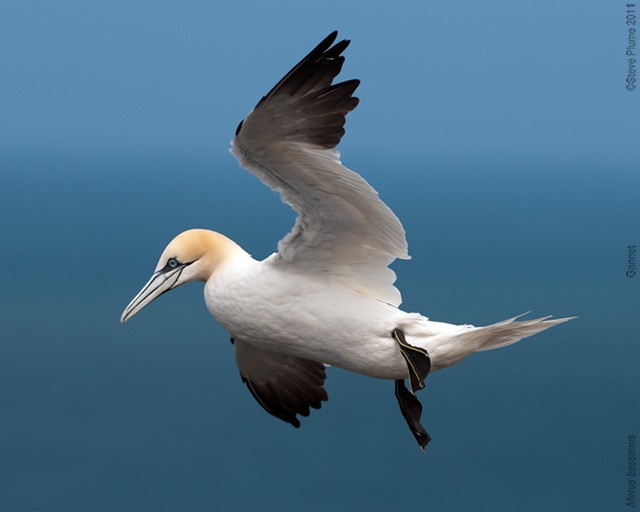 The researchers built and tested their computer model using data on Gannet populations around the UK, Ireland and France. "Not all seabirds are ever going to be able to be tagged, especially smaller birds," says Grecian, "so we decided to use a species we know a lot about — the Gannet — to see if we could predict seabird distribution." Over 70% of the global population of Gannet live along the UK, Irish and French coasts. During the breeding season they live in large colonies along sea cliffs and on rocky islands. From here the adults fly out to sea to find food. "They can travel massive distances," says Grecian. "Gannets can travel five or six hundred kilometres from their colony during just one foraging trip."

To create their model, the researchers used information from 25 Gannet colonies. They first looked at colony size, as birds from larger colonies travel further to avoid competitors. This was then refined using tracking data from previous studies, together with details of where the Gannets' food was most likely to be found. As well as details of foraging sites, the model also included the birds' behaviour near the colony, where they gather in large 'rafts' on the sea surface to rest and socialise. "Protecting pelagic areas for foraging seabirds is vital, but we also need to consider the bigger picture," says Grecian. "Seabirds require protection around breeding colonies where they gather to raft, along migration flyways, and during the overwintering period."

The next steps for the researchers are to see whether the approach can work for smaller species, such as petrels and terns that cannot carry tags. Votier also highlights the need to investigate the birds' behaviour outside the breeding season — and the behaviour of immature birds, which make up a large proportion of Gannet and other seabird populations. "Gannets don't breed until they are five or six years old," he says. "In those first five years of life we know very little about what they do. For their conservation at sea we're pretty much in the dark."