My job in communications at the BTO often sees me identifying birds from photographs, most of them escaped parrots or odd pheasants (there seem to be a fair few of these at large). Every now and then a photograph lands on my desk that is a lot more interesting, and so it was with the one that appeared on Wednesday 11th May. It was clearly a male Rock Bunting, but it was the location and the date that the photograph was taken that shocked me — Bolton Abbey, Yorkshire, on Sunday 8th May, only three days earlier! What's more I knew the observer; we used to both frequent the same nature reserve on a regular basis over thirty years ago.

He won't mind me saying that birds aren't his first subject, hence his not knowing what the bird in the photograph was. He related to me how he had been on a RSPB local group trip to Bolton Abbey to catch up with Pied Flycatcher, and how he'd missed a showy bird just after his arrival at the Abbey. He went back to the area to look for this bird, noticed an odd bird perched at the top of the tree, didn't know what it was, photographed it, called other members of the group — at which stage the bird flew off — and showed the photos (three were taken, the best of which is reproduced here) to the whole group, who couldn't identify the bird. 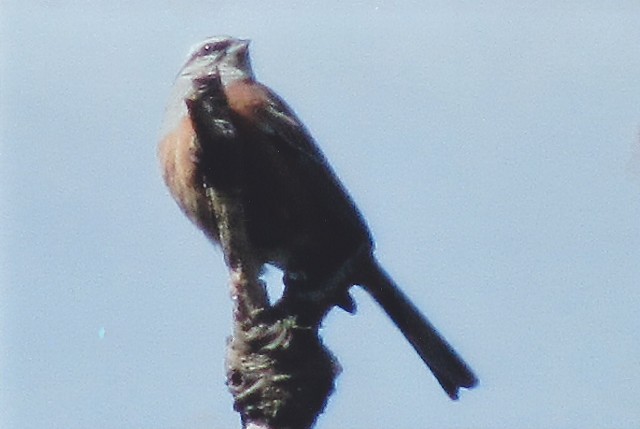 Nick Moran takes up the story from here:

I'd been in a meeting since 11am, and it wasn't until late in the working day that a colleague told me that Paul Stancliffe had been up to our office brandishing a photograph of a male Rock Bunting! I immediately rang Paul; he had left work and the image had already been filed by the Garden BirdWatch (GBW) team (to whom it had originally been sent) but he filled me in on the location and other details about the sighting. I rushed to the GBW office and managed to find the relevant file; staring me in the face was indeed a picture of a male Rock Bunting.

Back in the Monitoring office I began discussing what to do, with late-working colleagues Chas Holt and Richard Thewlis. Tempting though it was to keep things quiet until we had staged a dawn raid on the Bolton Abbey area the next morning, discretion (and the thought of a 7-hour round trip on the off-chance) got the better part of valour! We decided that releasing the news would be the best way to ensure that there was a proper search for the bird, perhaps even as early as the same evening, so I called Paul back to double-check the location details, then contacted Fiona Barclay and Alan Tilmouth, who posted the sighting on BirdGuides at 7:25pm.

Already late for my evening domestic duties, I 'borrowed' the photograph and dashed home. Once I'd explained the situation to my ever-understanding wife, I scanned in the image and added it to the posting, along with a comment expanding on the precise location. I also had a quick look in the Field Guide to Birds of the Middle East to make absolutely sure we hadn't made an oversight with House Bunting, Striolated Bunting or even Cinnamon-breasted Bunting — not that I had any doubt in Paul's ability or the bird's identity, but I knew it would be on my head, having posted and commented on the sighting! All that remained was to sit back and wait for someone to go and look for the bird... sadly, as it turned out, the few who were on site the next morning were unable to relocate it.

Sadly the bird was never seen again; however, the branch on which the bird was photographed was located - unfortunately this time without the addition of a Rock Bunting. If accepted, this bird will represent the fifth British record and the sixth individual; the first record, in West Sussex in 1902, was of two birds. It will also represent the second record for Yorkshire following a long-staying bird at Spurn in 1965. The last British record of Rock Bunting was of a male on Bardsey Island, Gwynedd, on 1st June 1967.