New research has shown that the majority of Snowy Owls in Canada are strong enough to survive winter, and that even vagrants are very healthy.

Snowy Owls capture the popular imagination, but ornithologists know surprisingly little about how these well known and much loved birds of the far north fare during the harsh winters they endure.

Researchers behind a new study in trapped and tracked Snowy Owls wintering in Canada and found that, while age and sex affect the birds' condition, most do fairly well and show few signs of starvation; some even put on weight during the cold season.

Female Snowy Owls are bigger than males, and Alexander Chang and Karen Wiebe of the University of Saskatchewan expected that their dominant behaviour would give them access to greater food resources than males during the challenging winter season. Their results bore this out: females tended to be in better condition than males, and adults with their greater hunting experience were also healthier than than juveniles.

It's widely believed that Snowy Owls that winter south of the Arctic tend to be struggling, starving birds that only move south because they can't find enough to eat in their home territories, but few of the adults captured in the wild showed signs of starvation. In fact, many of the adult birds in the study actually increased their fat stores slightly over the course of the winter. Well insulated against the cold and not distracted by the demands of reproduction, Snowy Owls may use winter as a time to recharge and build up their reserves before returning to their breeding grounds.

Much of the data for the study was collected by two retired farmers, Marten Stoffel and Dan Zazelenchuk, who discovered a love of owls and pursued raptor ringing (aka banding in North America) as a hobby. "They had no intention of analysing data, but spent numerous hours in the field in gruelling sub-zero weather honing their trapping techniques and drinking litres of coffee, waiting for hours for an owl to come to a trap," says Wiebe.

"This study ... nicely shows that most Snowy Owls wintering on the prairies are in good body condition and, contrary to a commonly held belief, are not starving, despite the harsh environmental conditions that prevail in winter," according to Gilles Gauthier of Quebec's Université Laval, an expert on Arctic wildlife. "This study clearly documents differences in body condition between age classes and sexes. The results are very robust, as they are based on large sample sizes spanning a period of almost 20 years." 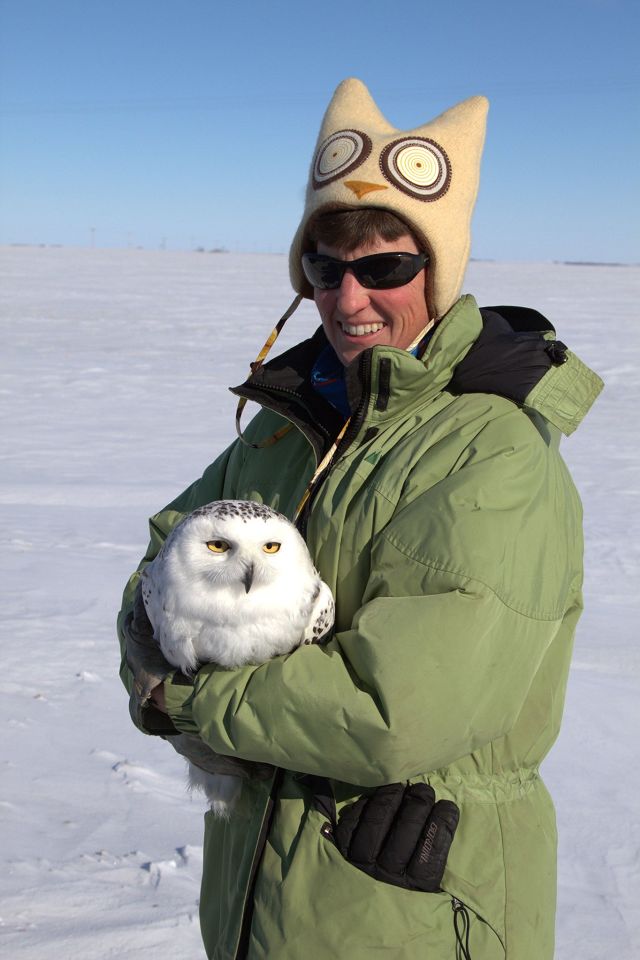 A researcher holds a freshly caught Snowy Owl in the Canadian Arctic, prior to it being tracked (Photo: K Jacobsen/The Auk)