Three small shorebirds form a confusing group which shares the same habitats. With similar markings of brown and white in winter and immaturity, and black breast-bands while breeding, they can often match each other at any age and season, and are frequently silent, even when flushed – they can pose a year-round conundrum. Andy Stoddart comes to your assistance. 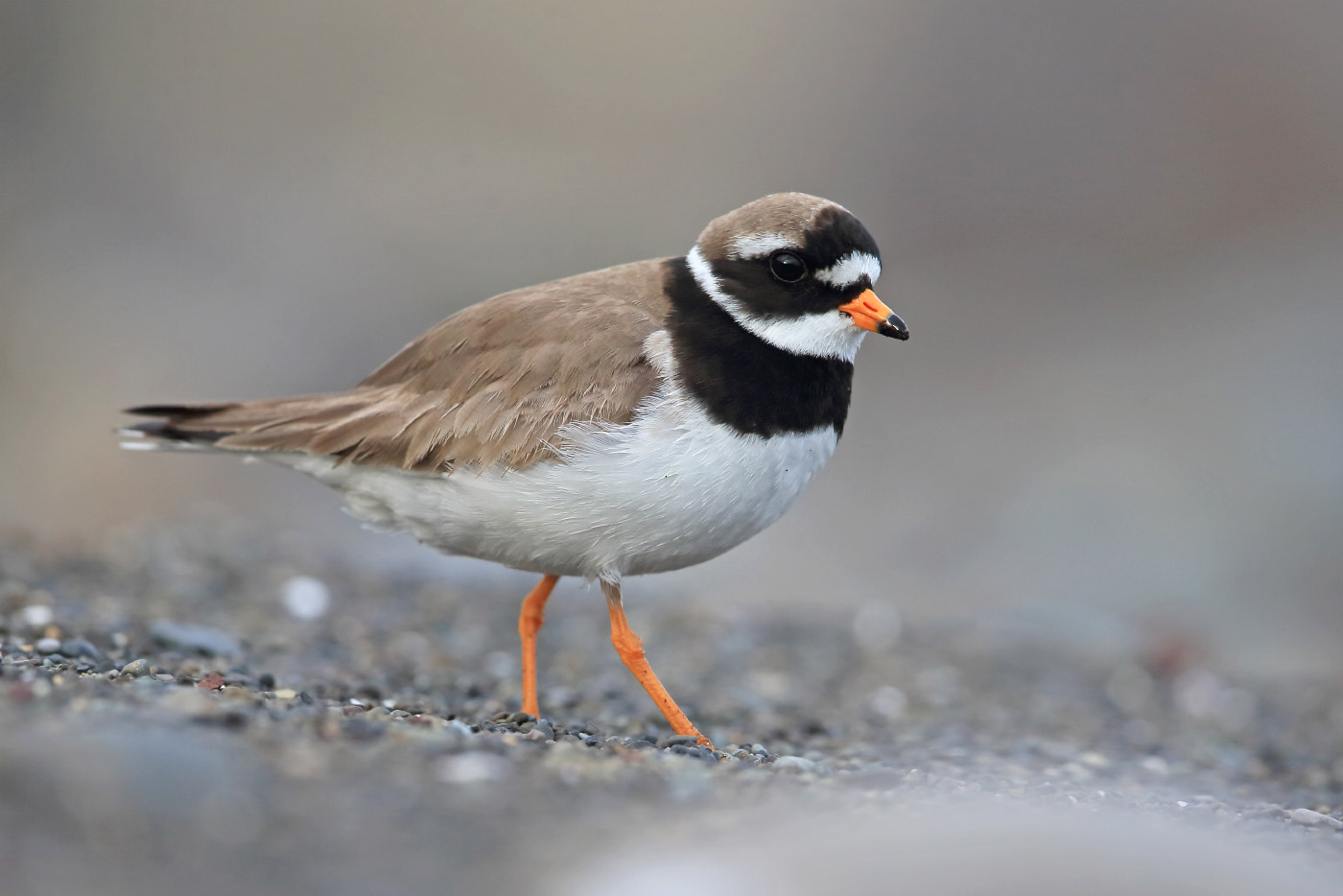 Adult Ringed Plover (Snæfellnes peninsula, Iceland, 17 June 2016). This portrait of a Ringed Plover shows off its suite of distinctive characters to perfection – a rather dumpy shape with a large rounded head, a short, stout, almost bulbous bill, prominent black-and-white markings on the head, a broad black breast-band, bright orange legs and an orange bill with a black tip. Birds like this are striking, attractive and easy to identify (Robin Chittenden).

With their endearing appearance and habits, the small 'ringed' plovers are a perennial favourite. Ringed Plover is a delightful accompaniment to a walk on the beach, and although this species is a British breeder, we are also visited by passage birds from elsewhere. Even more endearing perhaps is Ringed Plover's diminutive relative, Little Ringed Plover, best sought inland. And there is a potential rarity, too, in the shape of Kentish Plover.

This species has a large breeding range which extends from north-east Canada in the west to north-east Russia in the east. British breeders are essentially resident, breeding on shingle and sand beaches and wintering in more estuarine habitat. By contrast, the northern breeders are long-distance migrants, performing a 'leapfrog migration' over their British cousins to winter in Africa. Northern Ringed Plovers are therefore seen passing through Britain in both spring and autumn.

Once adult, British Ringed Plovers retain a mostly summer-type plumage throughout the year and are easily recognised by their chunky proportions, large heads, bulbous bill, broad breast-bands, extensive white rear supercilia and orange-based bill and legs. They do not have a pre-breeding moult and typically look rather pale sandy brown above, particularly in spring and summer.

By contrast, adult northern Ringed Plovers have a dull winter plumage with duller bare parts. They also have a pre-breeding moult into summer plumage. On spring passage through Britain, they look fresh and, in comparison with their British counterparts, quite dark brown above. Northern birds also differ slightly in size and structure, being a little more petite, with a rather small, rounded head and slim bill.

Juvenile Ringed Plovers show diffuse brown markings in the head and breast instead of the crisp black and white of adults, and the breast-band is reduced or broken. The bare parts are dull and there are neat dark subterminal fringes to the upperparts feathers. Interestingly, British birds moult rapidly into first-winter plumage, while northern birds retain juvenile plumage into late autumn.

All Ringed Plovers share the same features in flight – a striking broad white wing-bar and a distinctive cheery too-eee call.

Ringed Plover variation is clinal and its taxonomy is somewhat fluid, but British breeding birds are of the nominate subspecies hiaticula, the form that also breeds in western Europe and southern Scandinavia. Northern Scandinavian and Russian birds are traditionally separated as the subspecies tundrae, while those from Iceland, Greenland and Canada have been regarded over the years as nominate hiaticula, tundrae or, now increasingly the case, as a new subspecies, psammodromus. For observers in Britain it is perhaps best just to try to distinguish between British birds and 'northern tundra types'.

This species breeds throughout temperate Europe and Asia, wintering in Africa, the Indian subcontinent and South-East Asia. Unlike any Ringed Plover form, this is exclusively a summer visitor to Britain, but it is an early returner, the first birds appearing in March. Unlike the mainly coast-dwelling British Ringed Plover, this species is more widespread inland, favouring the fringes of lagoons and gravel pits and readily using former industrial sites.

Compared to Ringed Plover it is a much more delicate bird, noticeably smaller and slimmer bodied, with longer legs, a small head, slim bill and a long, thin 'rear end'. Although superficially similar in plumage, the adults' breast band is narrow, the bill is dark, the legs a dull yellow and there is an obvious yellow eyering. As in Ringed Plover, juveniles show diffuse brown markings in the head and breast and neat dark subterminal fringes to the upperparts feathers.

Little Ringed Plovers are perhaps most striking in flight, appearing small and narrow winged with, unlike Ringed Plover, no or at most a very faint hint of a wing-bar. They are vocally very distinct, and indeed are often picked up on call – a high-pitched and far-carrying pee-ooo.

Once a regular British breeding species, Kentish Plover has experienced a strong and steady decline in this country; indeed, it is now nearing national rarity status. Today, Kentish Plover is a spring overshoot to Britain, best sought in April or May along the south coast. Further north, and outside these seasons, it is very rare indeed. Elsewhere, however, it remains a common and widespread bird, occurring in a number of forms across southern Europe and southern parts of Asia. Populations in North America are increasingly treated as a separate species, Snowy Plover.

Kentish Plovers are small and compact, smaller than Ringed, with a rather large head, slim bill, neckless appearance, short rear end and quite long legs. In terms of plumage, males are very attractive, with pale sandy upperparts, black ear-covert and forehead patches, neat black breast-side patches and a rusty wash across the nape. Females lack these black and rusty markings and just appear a rather bland pale sand colour, somewhat reminiscent of a tiny sand plover, albeit with a complete white neck collar. Unlike the other ringed plover species, Kentish Plovers have dark legs.

In flight there is a strong wing-bar and also prominent white tail sides, while the flight call is a soft bip. 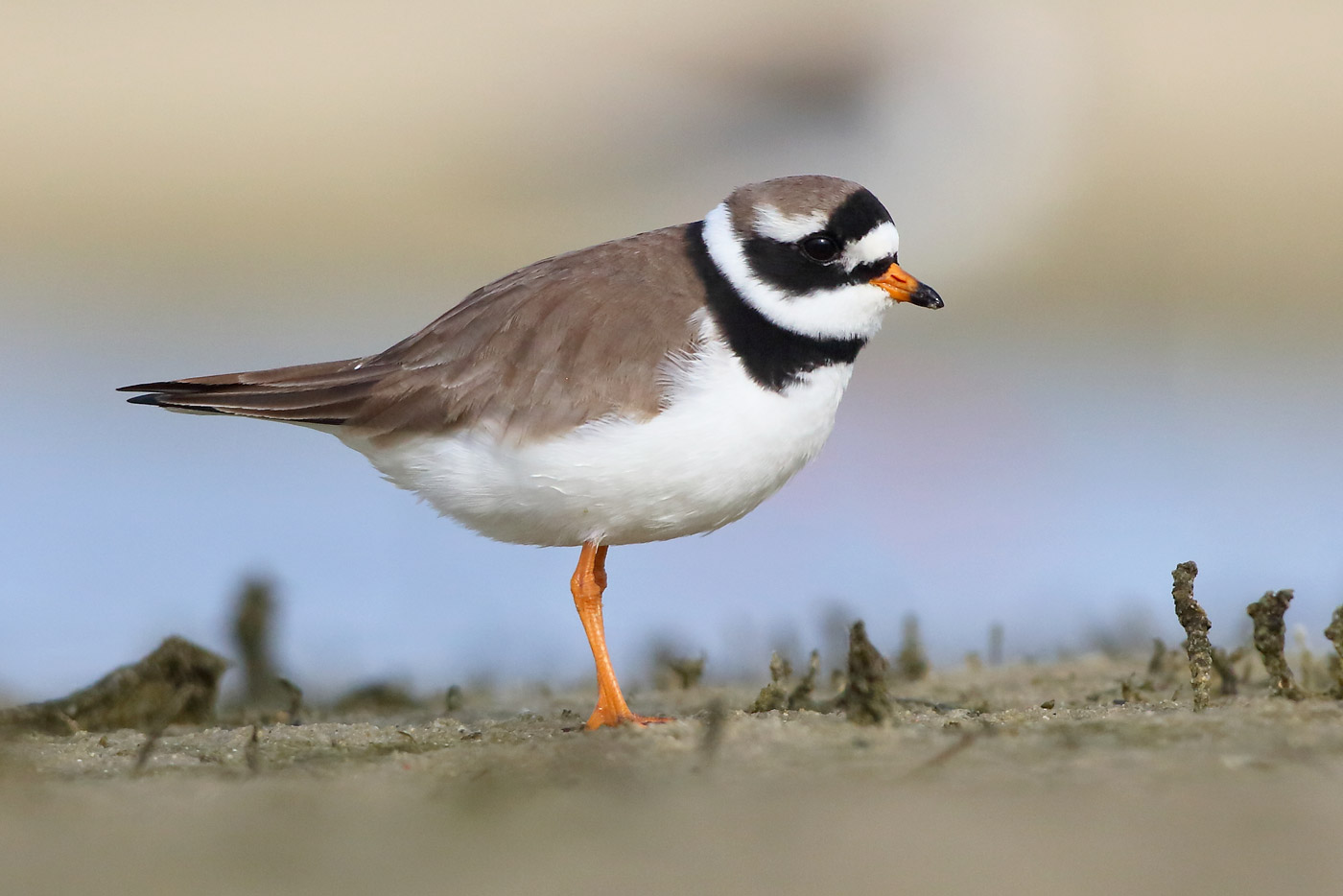 Adult Ringed Plover (Valladolid, Spain, 8 April 2016). This bird, photographed inland in Spain (and therefore presumably a migrant northern bird), shares the same structural and plumage characters as the bird in photo 1 (page 45). The black breast-band looks thinner on this individual (as can be the case in some northern birds) but its prominence is also much affected by posture (Carlos Bocos). 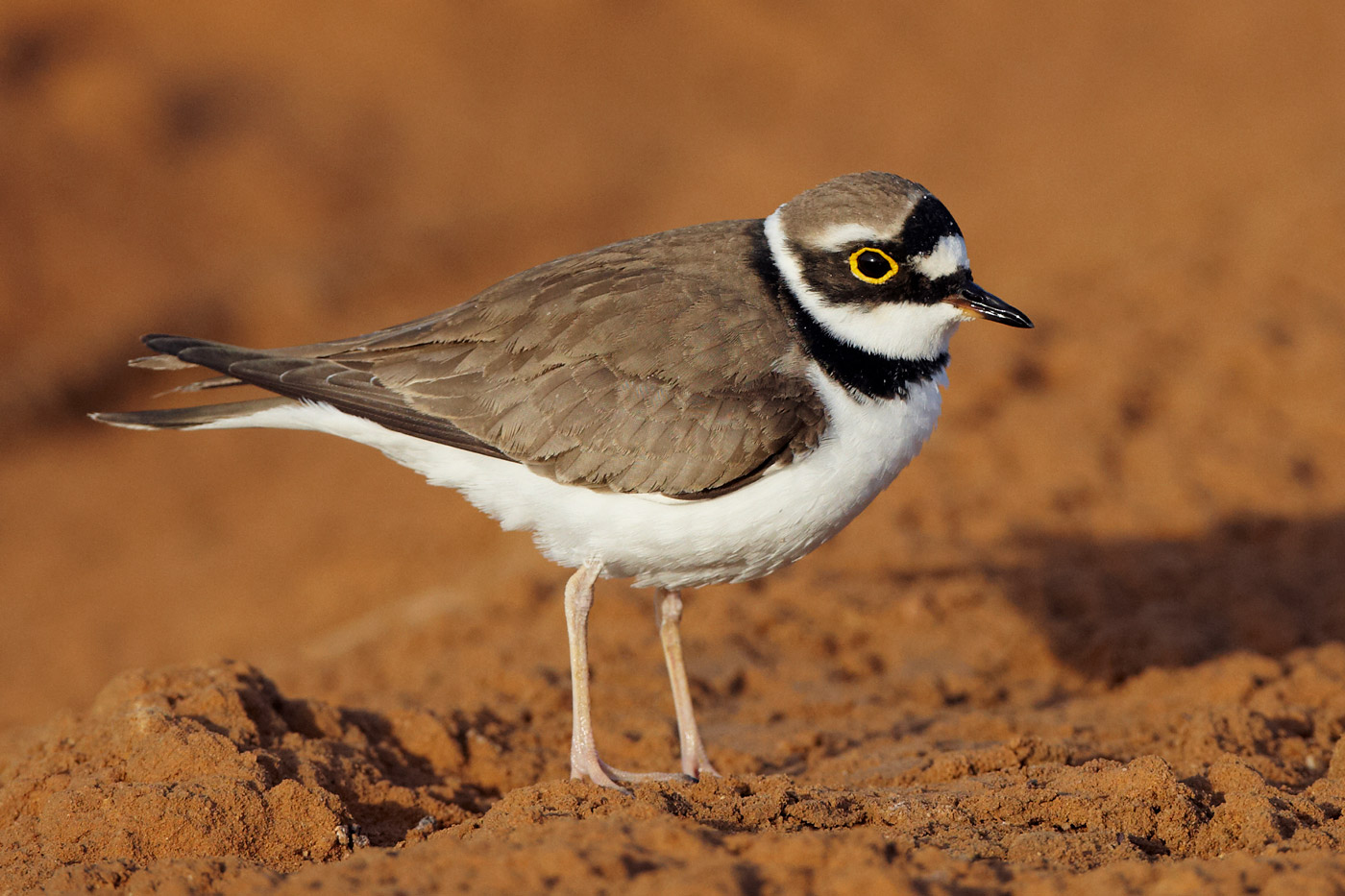 Adult Little Ringed Plover (Eilat, Israel, 31 March 2009). The most eye-catching feature of this bird is its bold yellow eyering – a character that immediately identifies it as a Little Ringed Plover. There are plenty of other clues, however, notably the narrow breast-band, the slim, less bulbous and wholly dark bill and the dull yellow legs. At range or in bad light – when these features are not visible – Little Ringed Plover can still be readily identified by its structure, most notably a small rounded head, slim body and a very long, slim 'back end' (Markus Varesvuo / www.birdphoto.fi). 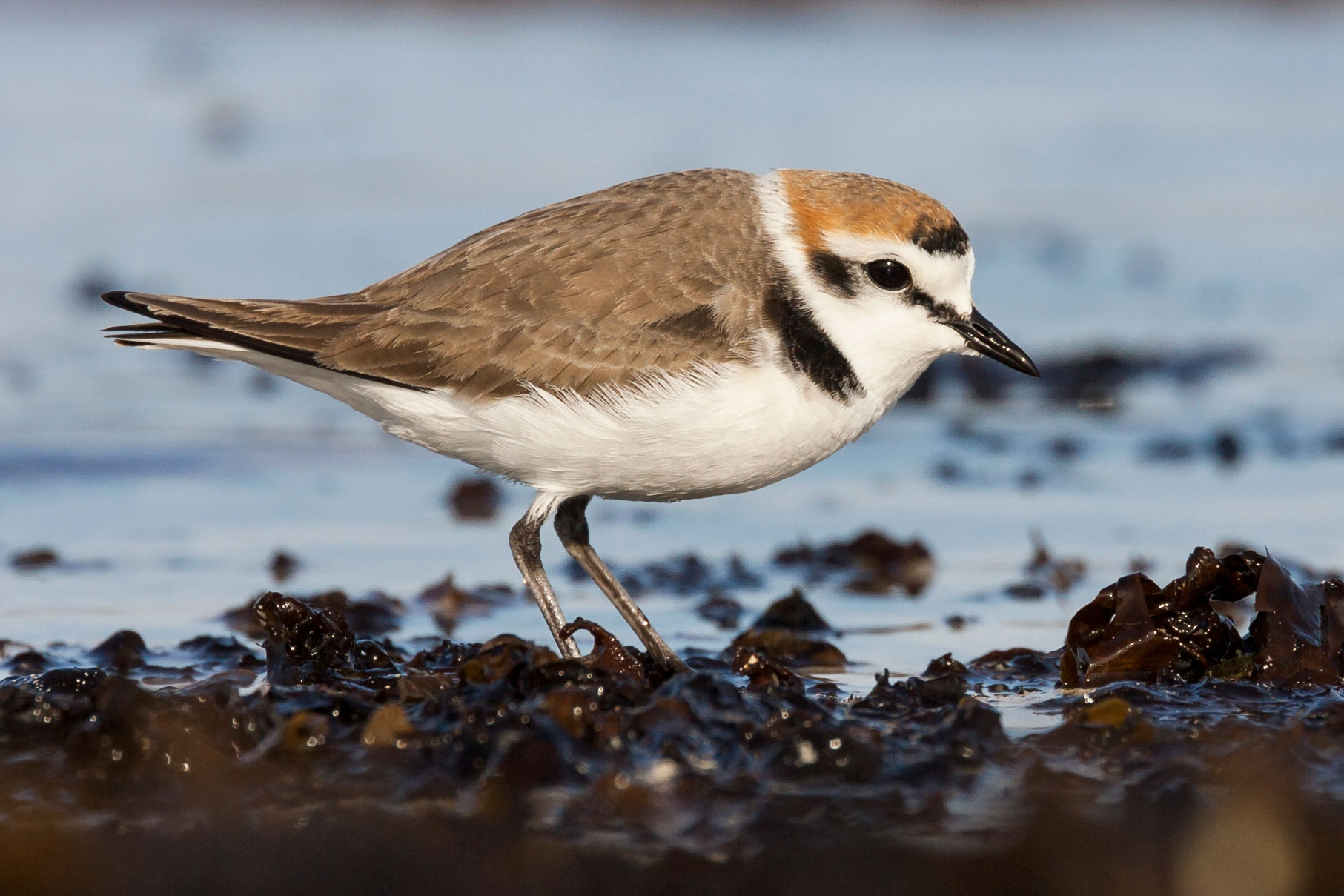 Adult male Kentish Plover (Fuerteventura, Canary Islands, 9 January 2007). This plover looks immediately rather different – pot bellied, compact, 'neckless', large headed and front heavy. Its 'back end' is not as attenuated as that of Little Ringed Plover and its legs are darker. Most importantly, however, its head pattern is very different from either of the 'ringed' plovers, comprising black ear-covert and forehead patches, neat black breast-side patches and a rusty wash across the nape (Oliver Smart). 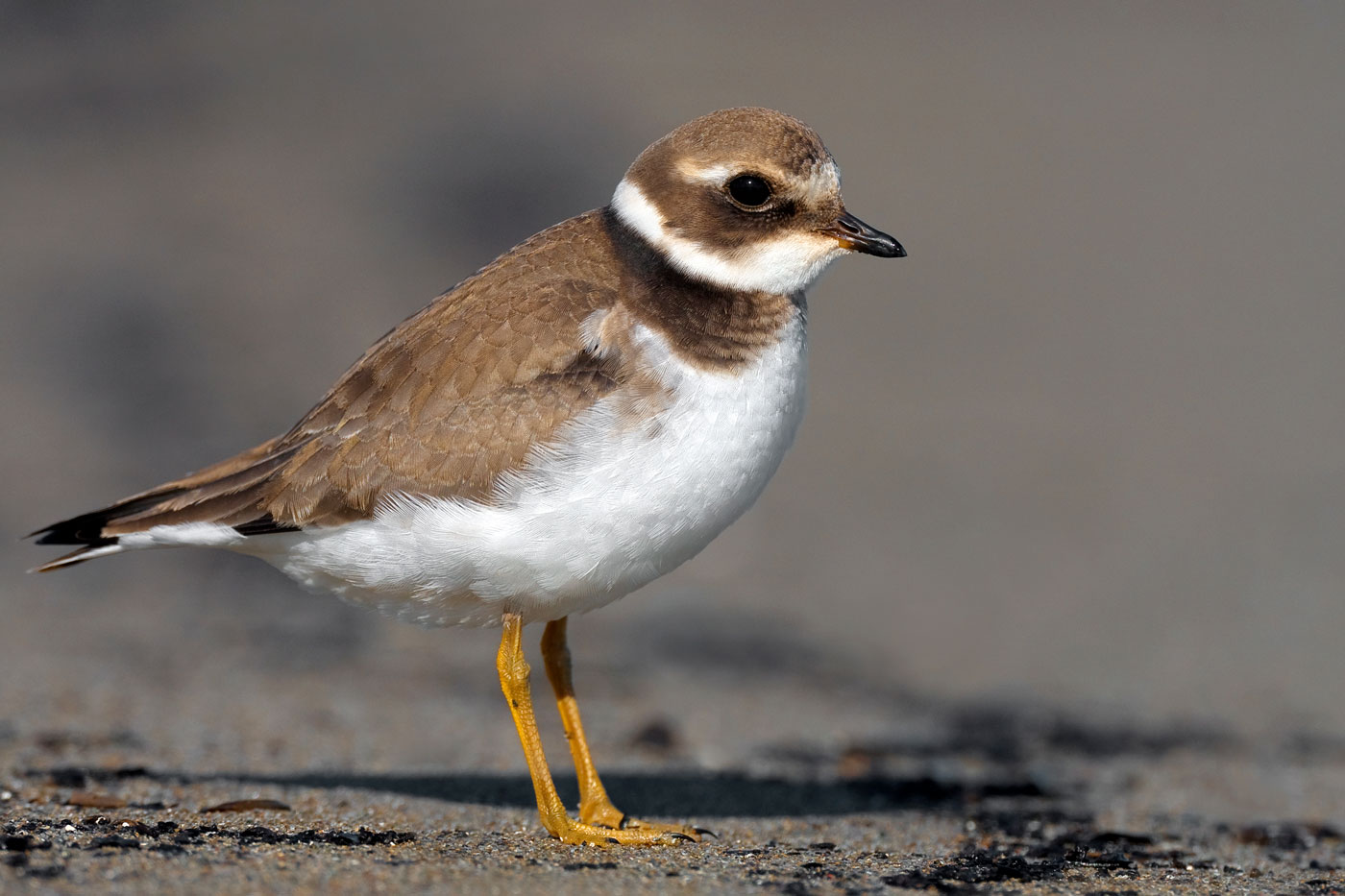 Juvenile Ringed Plover (Tuscany, Italy, 14 October 2009). This bird is easily identified as a Ringed Plover by its structure. Note the typically rather rotund shape with a relatively short 'back end', the large head and the short, rather bulbous bill. In terms of its plumage it resembles a diluted or washed-out version of the adult, with diffuse brown markings in the head and breast, and the breast-band is broken in the centre. In addition, the legs are relatively dull and the bill is wholly dark, while a close examination of the upperparts feathers reveals subtle dark subterminal fringes (Daniele Occhiato / www.agami.nl). 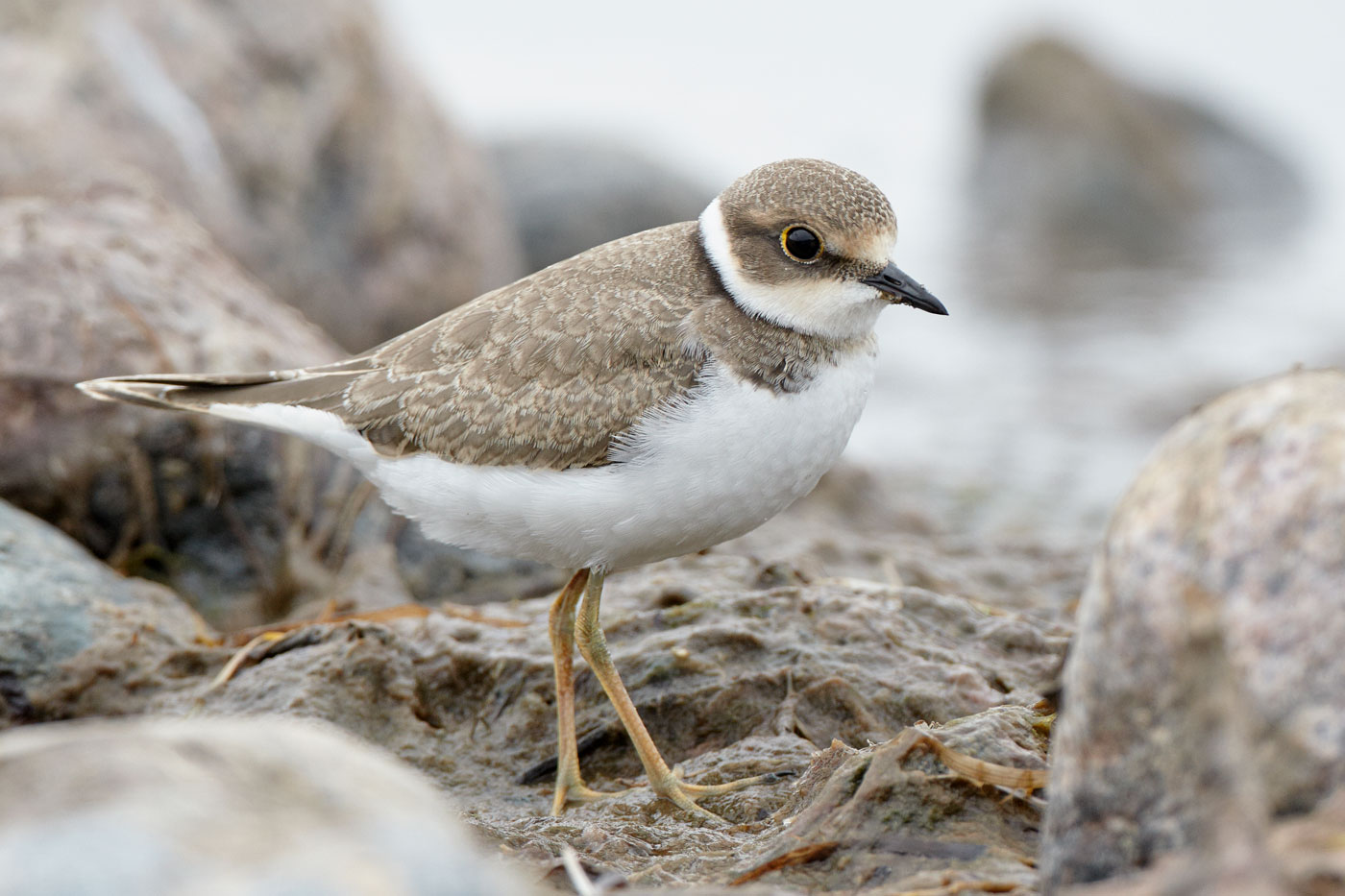 Juvenile Little Ringed Plover (Utö, Finland, 15 July 2011). This plover can also easily be aged as a juvenile by the subterminal fringes to its upperparts feathers and the muted smudgy brown (not crisp black-and-white) patterning on the head and breast. The relatively prominent yellow eyering, the slim rather pointed bill, the long, slim body and the very long 'back end' identify this young bird as a Little Ringed Plover (Markus Varesvuo / www.birdphoto.fi). 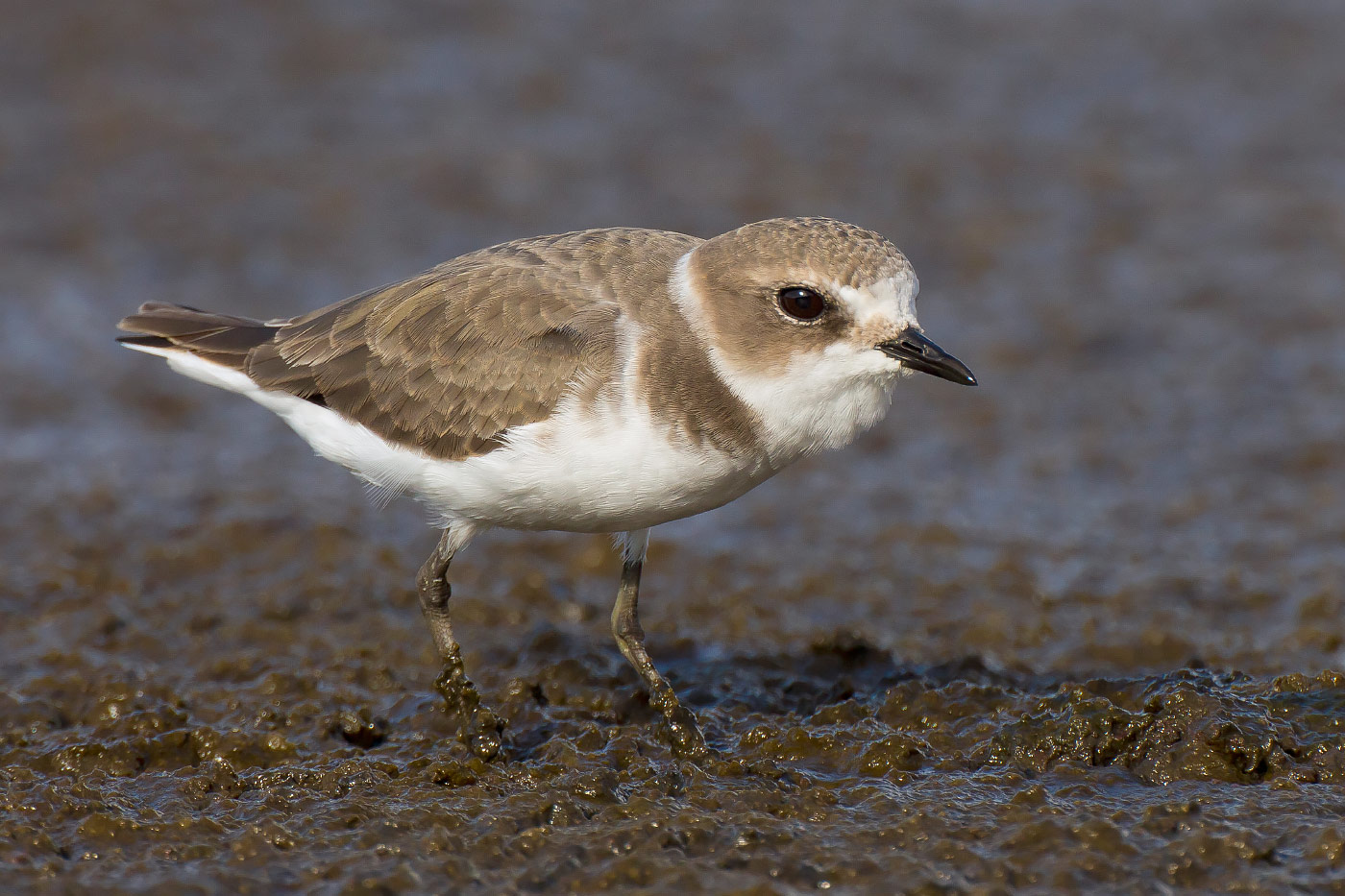 Juvenile Kentish Plover (Terceira, Azores, 10 October 2011). In terms of plumage this bird looks rather bland and anonymous, lacking strong contrasts around the head and breast. Indeed its plainness and uniformity resemble a sand plover as much as a Ringed or Little Ringed Plover. Any thoughts of a sand plover are, however, quickly eliminated by the bird's complete white collar. With the plumage offering few clues, it's time to turn to structure and here we find ample confirmation of our suspicion that this is a young Kentish Plover. Note the large head and 'front-heavy', neckless look. Final confirmation is provided by the dark legs, albeit covered in mud (Daniele Occhiato / www.agami.nl). 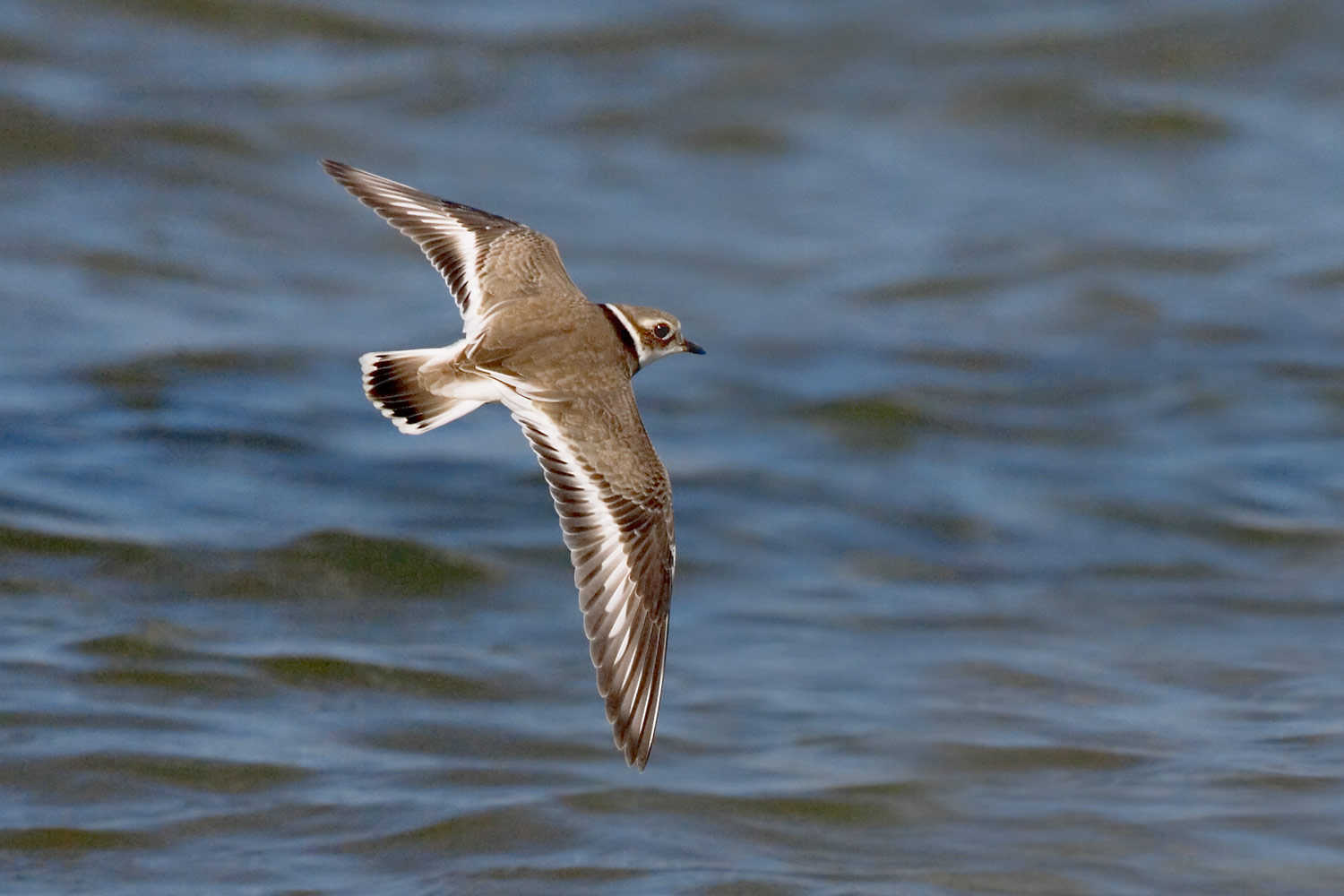 Adult Ringed Plover (Tuscany, Italy, 22 September 2005). This bird shows the classic Ringed Plover flight pattern of plain brown plumage and very bold white wing-bars which extend right across the upperwing as far as the outermost primaries. As a consequence, its prominence approaches that of a Sanderling. Note also the white sides to the uppertail coverts and the tail (Daniele Occhiato / www.agami.nl). 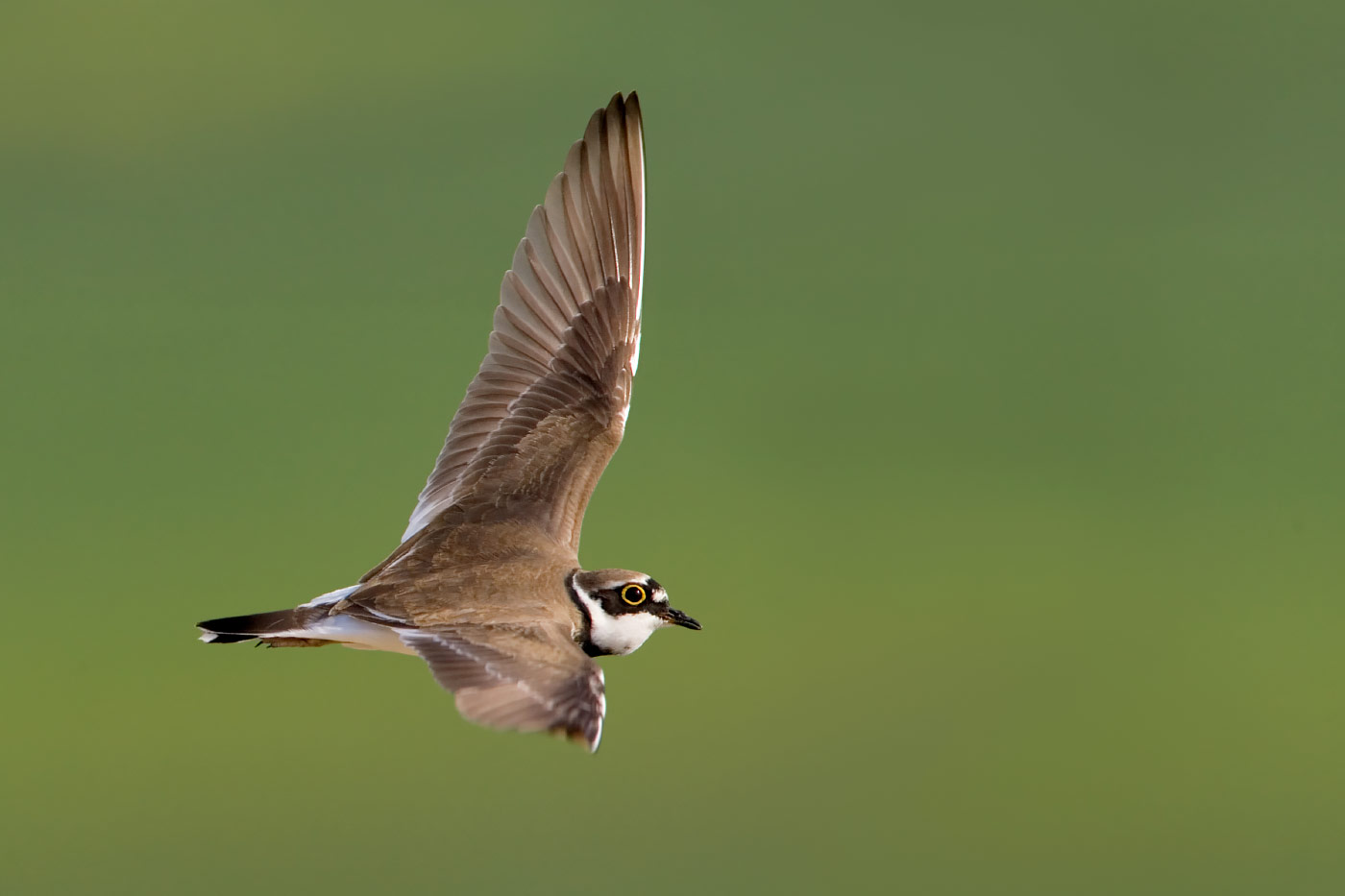 Adult Little Ringed Plover (Tuscany, Italy, 16 March 2007). By contrast, the lack of bold white wing-bars on this bird identify it immediately as a Little Ringed Plover. Note, however, that, as here, the pale tips to the greater coverts and primary coverts can provide the faintest suggestion of a diffuse wing-bar. There are plenty of other clues here too, notably the strikingly slim wings and of course the prominent yellow eyering (Daniele Occhiato / www.agami.nl). 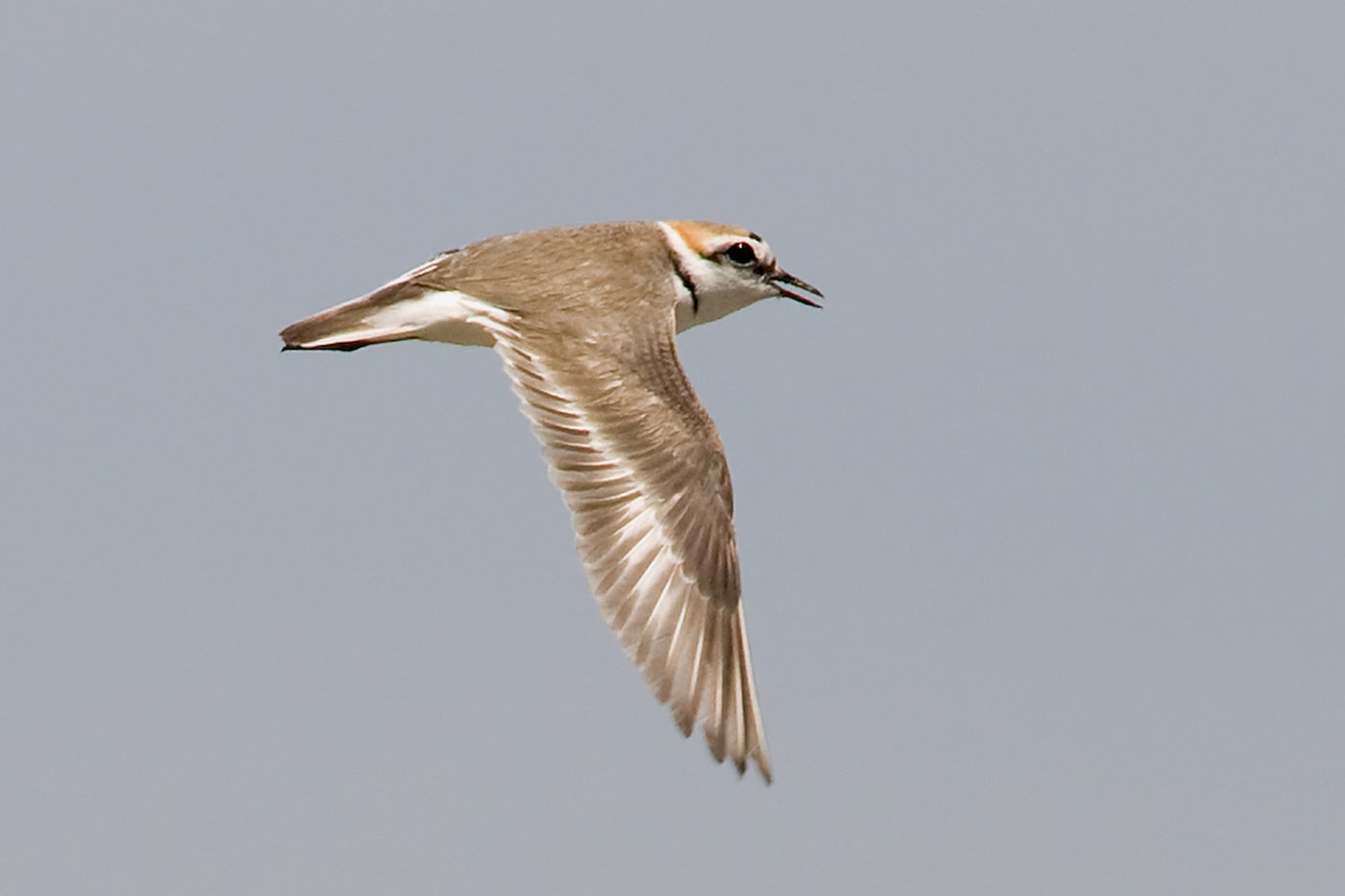 Adult Kentish Plover (location unknown, 11 June 2007). The bold white wing-bar of this bird resembles that of Ringed Plover and it would be easy to pass this bird off as that species. However, the rather pale sandy appearance might attract attention, as might the intriguing head pattern, with dark patches on the forehead, ear coverts and breast-sides and a rusty wash on the nape (Jari Peltomäki / www.agami.nl).