Finding a large pipit in Britain always makes for an exciting day, but it also brings some identification problems with it: is it a Richard's Pipit (the most common option) or could it be something rarer, such as a Blyth's or Tawny Pipit? 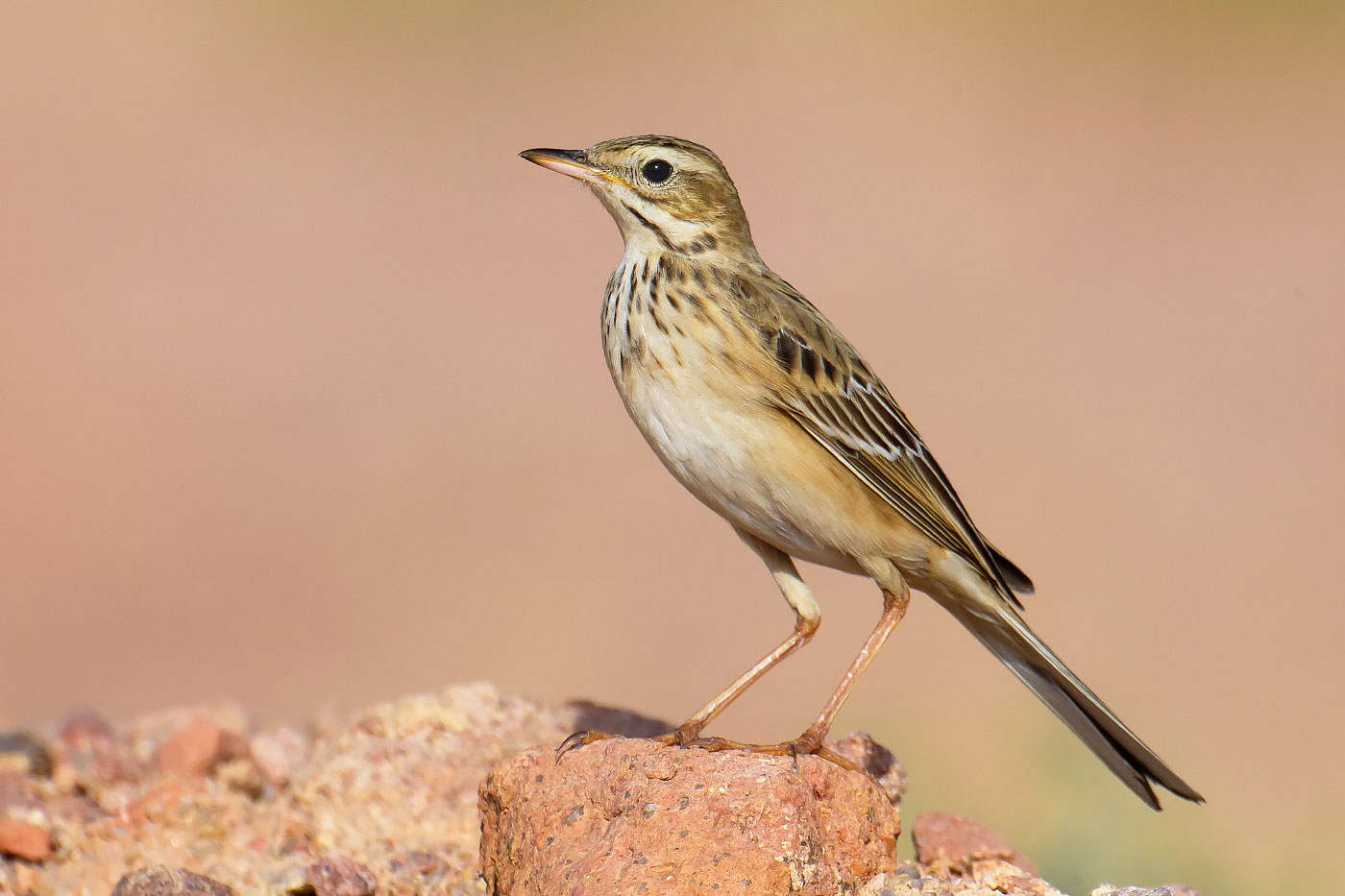 Richard's Pipit (Sharm El Sheikh, Egypt, 16 October 2010). This image beautifully captures the confident upright posture of Richard's Pipit. Also obvious here are its strong, almost thrush-like bill and long tail and legs; the long and strongly arched hind claws are also just about visible. These structural characters readily set it apart from the smaller pipits, but there are plenty of plumage features, too. Note the weakly marked lores, the plain orange-washed flanks and the relatively weak 'necklace' of streaking across the upper breast only (Daniele Occhiato / www.agami.nl).

This species has a large range, breeding from western Siberia to the Russian Far East and south to southern China. It winters in South-East Asia and the Indian subcontinent. Richard's Pipit has had a long and convoluted taxonomic history, but similar taxa breeding in South-East Asia and Australasia (and once included within the species) are now treated separately.

It has long been recognised as a frequent autumn visitor to Britain, mostly in September and October and particularly on the east coast and in the South-West. However, it could be encountered anywhere, even inland. Birds have also been found here in winter and early spring.

This is the quintessential 'large pipit', wagtail sized and much larger than any Meadow Pipit. It is strong billed (almost like a thrush), long tailed and very long legged and, on the closest views, shows a remarkably long and strongly arched hind claw.

It favours rough grass, through which it walks smoothly and confidently, pausing frequently to adopt a distinctive tall, upright posture. It is a shy species, often difficult to observe on the ground, and flushing readily. However, even a flight view can be distinctive for it has a strong, bounding flight action and a frequent habit of hovering briefly on landing.

When seen on the ground, the species shows a rather bland face with noticeably pale, plain lores (though these can appear dark when viewed head on), a weakly lined mantle, a strong orange-buff wash on plain flanks which contrasts with a whiter belly, and a dark malar and 'necklace' of dark streaks across the upper breast. The overall plumage pattern is therefore very different from that of the small pipits.

The flight call is the species' most distinctive feature, and it is usually found by this alone. It is a loud and far-carrying, harsh, rasping schrreeep, very like a House Sparrow.

Blyth's has a fairly small breeding range, mainly in Mongolia. It winters in the Indian subcontinent. The first live bird recorded in Britain was on Fair Isle in 1988, since when it has become established as a rare late autumn vagrant, with 29 accepted records. There have now also been occasional birds in winter and spring.

The identification of Blyth's Pipit is not to be undertaken lightly, but is perhaps not the insurmountable problem it once was. This is essentially a smaller version of Richard's Pipit – more akin to Tree Pipit in size. It is compact, with a shorter bill, legs and tail than Richard's. Close views may reveal that its hind claw is also much shorter than that of Richard's Pipit. It generally lacks the 'aggressive' upright posture of its larger cousin, preferring to creep around in the grass in the manner of a Tree Pipit. These structural and behavioural clues can be very useful and should be observed closely as plumage features are few.

The plumage very much resembles Richard's Pipit (including its pale lores), but on average this species is more strongly and evenly streaked on the forehead and crown and has more uniformly orange-buff underparts and a weaker upper breast 'necklace'. The 'classic' feature – the shape of the dark centres to the central median coverts – is subtle and hard to see, and in any case only applies to newly moulted adult feathers.

The best feature is the call – a long pscheeeoooo, a little rasping and similar to Richard's Pipit, but distinctly softer, more reminiscent of Yellow Wagtail, and most importantly, often accompanied by diagnostic short chep calls.

This species has a large range, breeding from Iberia and Morocco in the west through southern and central Europe to Mongolia in the east. It winters in Africa just south of the Sahara, the Middle East, Pakistan and north-west India.

Previously classed as a scarce migrant to Britain, its numbers have decreased in recent years, and with fewer than 10 recorded in an average year, it is now treated as a national rarity. Birds reach us both as spring 'overshoots' and in autumn, with most records coming from southern Britain.

In size, this species approaches Richard's Pipit, but is a little slimmer and more like a wagtail (but note the very pale legs), adopting a typically horizontal stance. It favours short (rather than long) grass and is therefore often much easier to observe. Close views will reveal an unremarkable hind claw.

There are plenty of plumage features to look for. In spring this is a pale, sandy bird, most similar in its overall hues to a Greater Short-toed Lark. Its upperparts are barely streaked, but its face is well-marked with a strong pale supercilium, dark eyestripe which (importantly) extends across the lores, dark markings in the crown sides and a dark lower border to the ear coverts. The median coverts are strongly dark centred, forming a prominent dark bar across the upper portion of the closed wing. The underparts are a very pale sand and, apart from a weak dark malar, almost unmarked.

Autumn birds in first-winter or adult plumage appear similar, but unmoulted juveniles are more scaly above, with pale fringes to the dark upperparts feathers, and may be more streaked across the upper breast. They may therefore suggest Richard's Pipit, but the face pattern features remain valid.

Tawny Pipit has a variety of abrupt calls, rather similar to House Sparrow or Greater Short-toed Lark, but typically a loud chup. 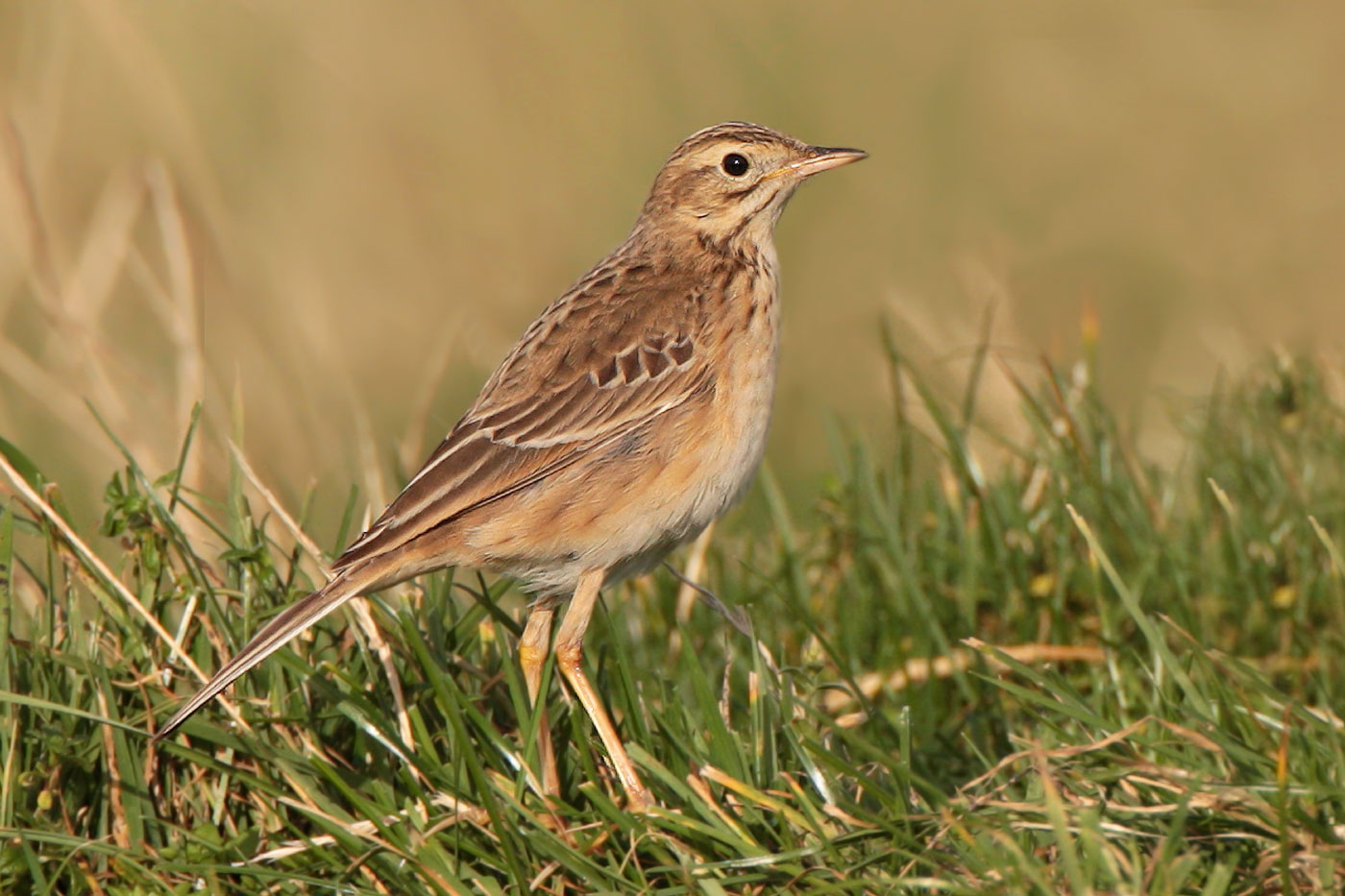 Richard's Pipit (Fair Isle, Shetland, 20 October 2015). This Richard's Pipit is adopting its characteristic erect posture, here in its favoured habitat of long grass. The structural and plumage features noted in image 1 are all visible here as well (including the hind claw) although this individual is rather more weakly marked across the breast. More of the upperparts can be seen here – they are typically weakly lined compared with those of the smaller pipits (Steve Arlow). 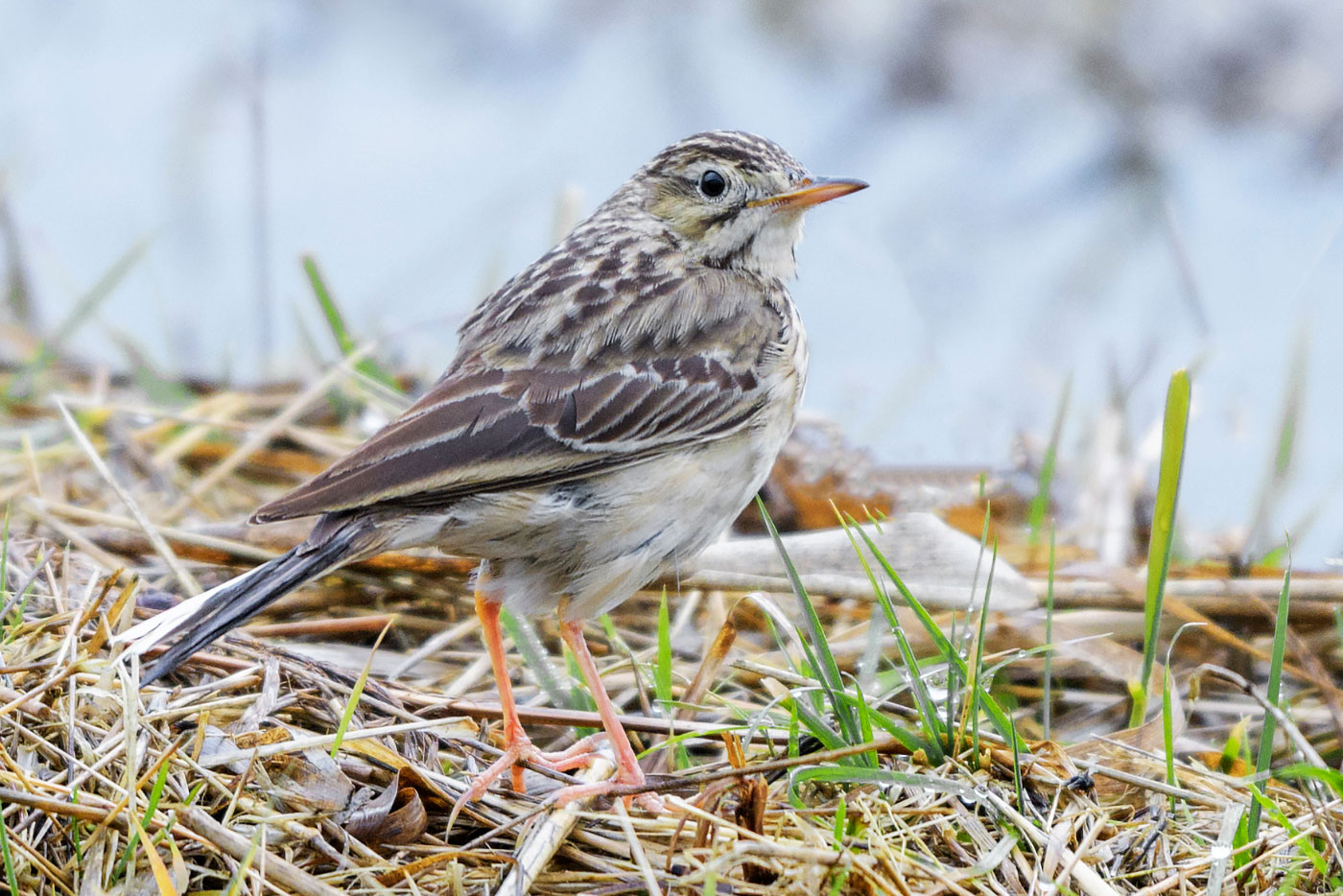 Blyth's Pipit (Werkendam, The Netherlands, 15 January 2017). Blyth's Pipit is very similar to Richard's and its identification is not to be undertaken lightly. However, this bird shows a less upright stance, a slightly weaker bill, a shorter tail and, importantly, a slightly shorter hind claw than its sister species. There are few real plumage clues visible here, but the strongly lined crown is a supporting feature. In life, the call would be an essential component of this bird's identification (Hans Gebuis / www.agami.nl). 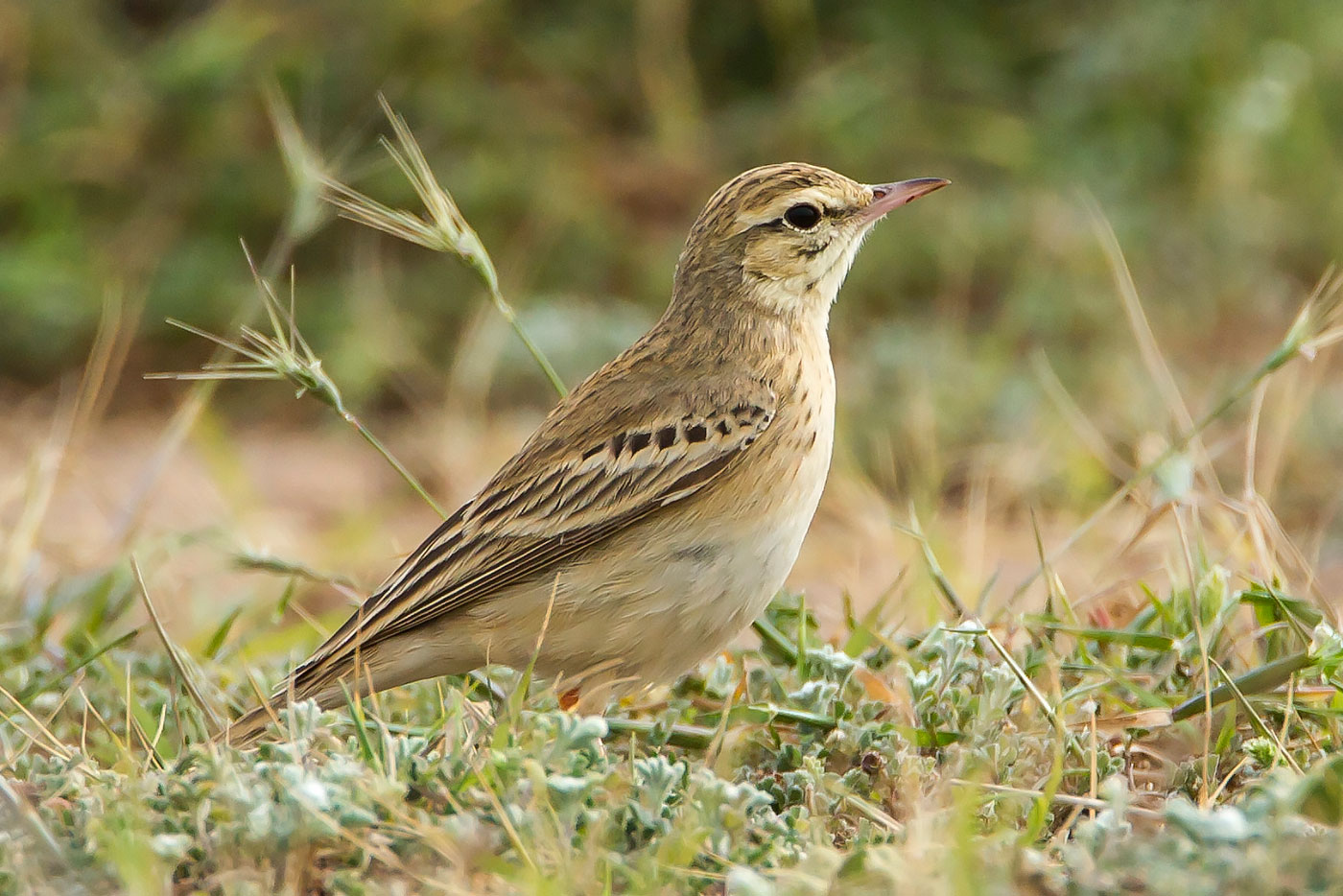 Tawny Pipit (Mandria, Cyprus, 21 March 2013). Tawny Pipit can also, as here, adopt a rather Richard's Pipit-like pose, but it is generally a little more similar to a wagtail in its structure and posture. Most striking here is the bird's plumage – a distinctive pale sandy hue reminiscent of Greater Short-toed Lark, with an 'intense' face pattern created by a clear dark loral line and eyestripe, barely marked upperparts and underparts, with just a scattering of fine streaking at the breast sides, and a reasonably obvious dark 'bar' across the upper part of the closed wing formed by dark centres to the median coverts (George Reszeter). 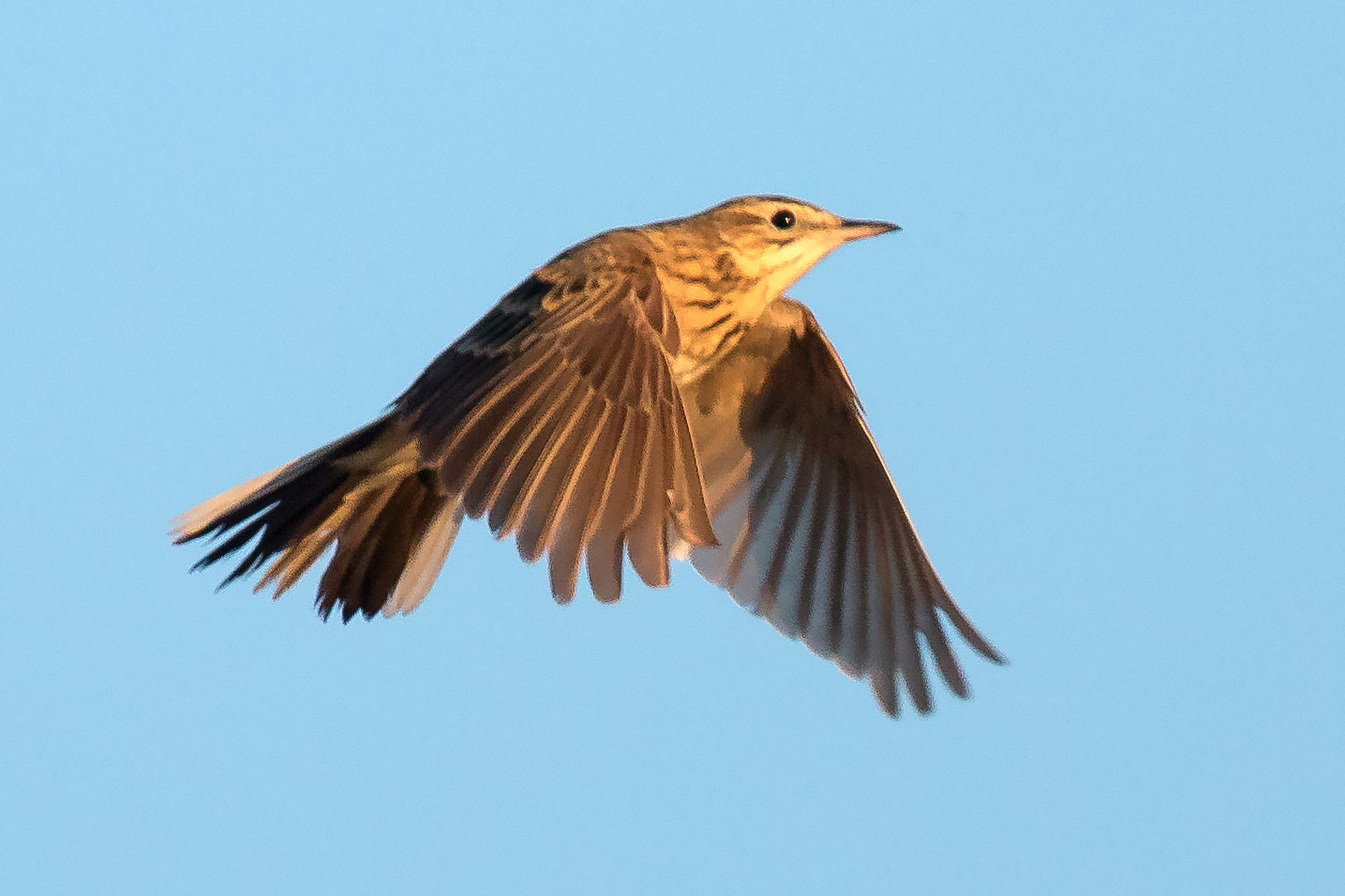 Richard's Pipit (Zhargalanta, Russia, 4 June 2017). Flying Richard's Pipits, as here, look large and (although foreshortened in this image) long tailed. The active flight is strong and purposeful with confident bounds and when the species comes into land it often exhibits a distinctive final hover just above the ground, usually with long, dangling legs. Some other details can also be seen in this image, including the strong, thrush-like bill, the rather plain-looking face, some breast streaking and extensive white in the outer tail feathers, but in life a flying Richard's Pipit is invariably picked out and identified by its loud and distinctive schrreeep call (Ralph Martin / www.agami.nl). 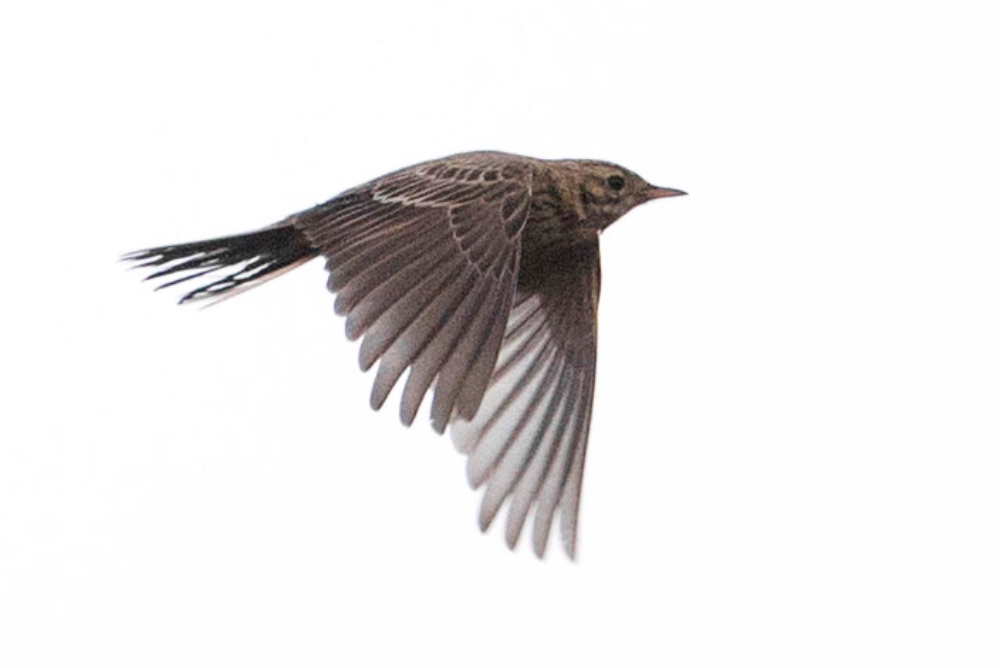 Blyth's Pipit (Calder Wetland, West Yorkshire, December 2014). Blyth's Pipits in flight should, like this bird, look smaller and more compact than their larger cousin, with a short-looking bill and a shorter tail; the whole effect is more similar to a Tree Pipit than a Richard's. However, as with Richard's Pipit, the call is the vital clincher with any in-flight encounter. Listen for the characteristic softer pscheeeoooo accompanied by short chep calls (Graham Catley). 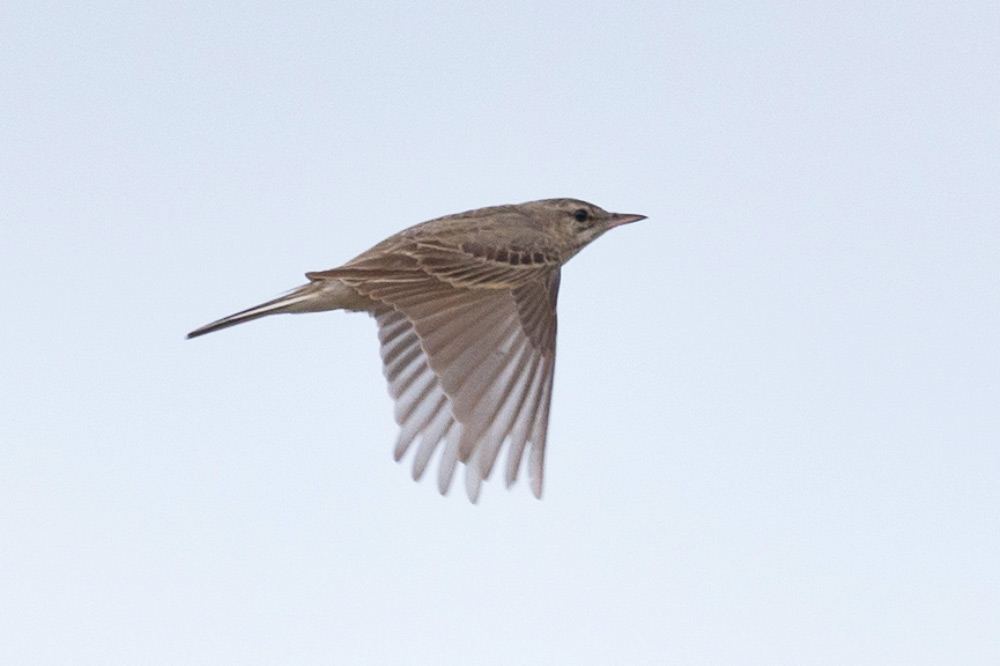 Tawny Pipit (Jüterbog, Germany, 24 June 2014). Tawny Pipits look slim and similar to a wagtail in flight, an appearance well captured in this image. The pale sandy upperparts and the face pattern can be seen here also but, as with the other large pipits, calls are key. Fortunately, Tawny Pipit is just as vocal in flight as the other species, giving a variety of abrupt, rather House Sparrow-like calls and typically a loud chup (Mathias Putze). 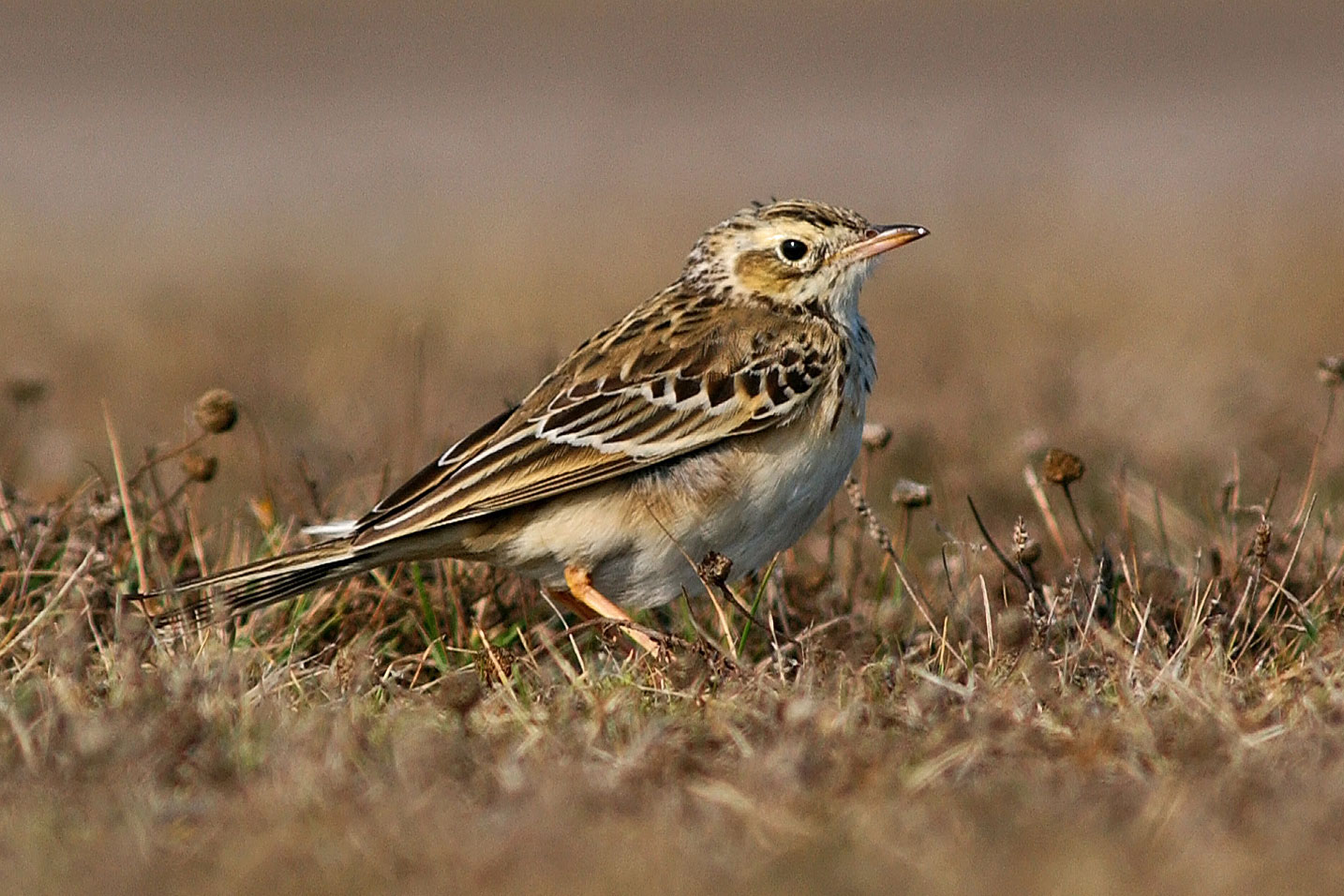 First-winter Richard's Pipit (St Mary's, Scilly, 23 October 2003). First-winters and adults of both Richard's and Blyth's Pipits are very similar, best distinguished by the pattern of the median coverts. Adults show an orangey-buff feather with a diffusely defined triangular dark centre, while first-winters retain juvenile feathers which are more extensively dark with a crisp and well-defined white fringe. Almost all the median coverts of this Richard's Pipit are of the juvenile type, thereby ageing the bird as a first-winter, but note the single newly moulted orange-fringed adult median covert towards the leading edge of the wing (Steve Young / www.birdsonfilm.com). 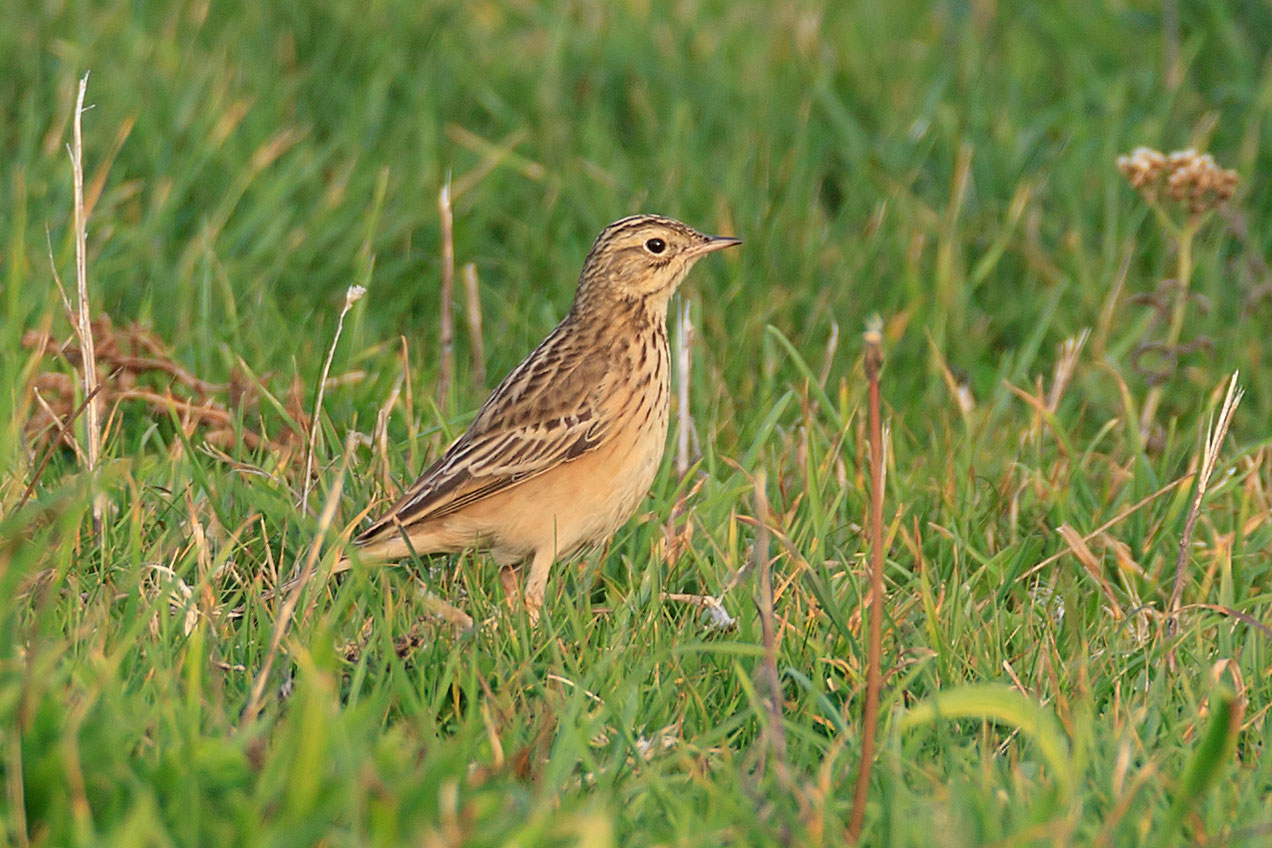 Blyth's Pipit (St Mary's, Scilly, 15 October 2015). While extremely similar to the above Richard's Pipit, clues as to its identification primarily come in form of the slighter and shorter bill, giving the bird more of a small pipit impression. Again, call and hindclaw, both not detectable here, would be very helpful indicators (Richard Stonier). 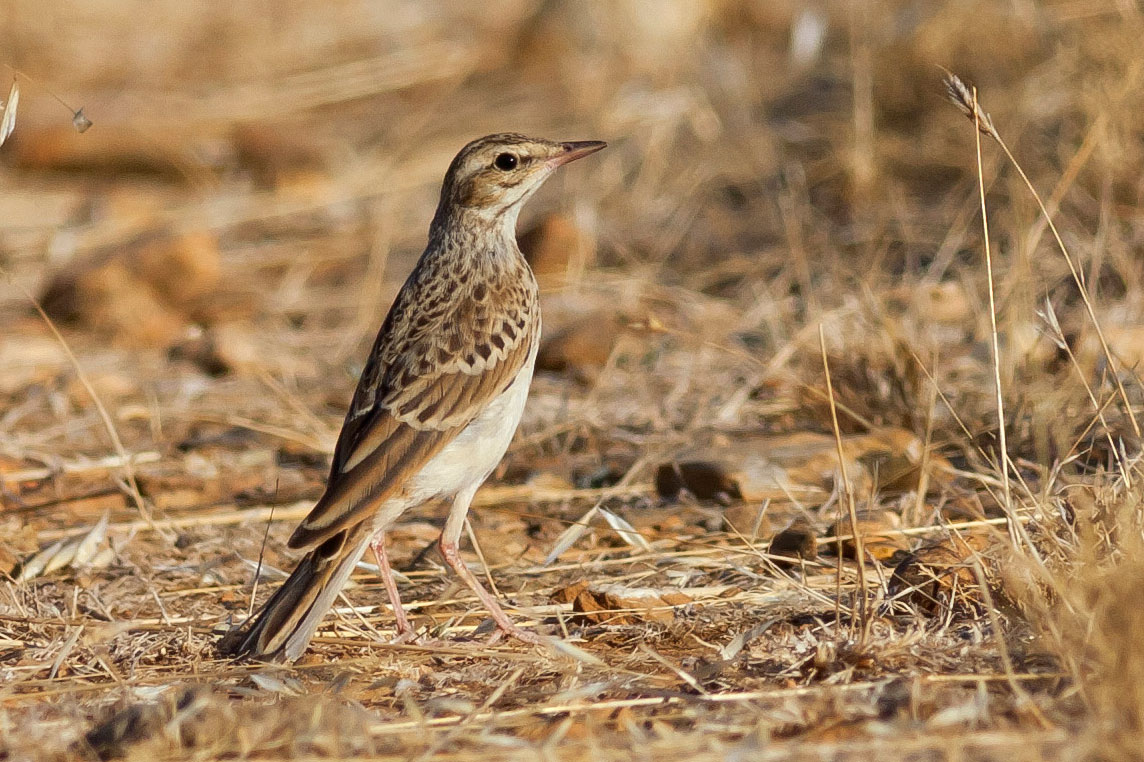 Juvenile Tawny Pipit (La Crau, France, 23 August 2009). The upright posture and reasonably well-marked upperparts of this bird might suggest a Richard's Pipit, but the upperparts are evenly 'scaled' rather than marked with blurry longitudinal lines. Confirmation that this is a juvenile Tawny Pipit can be found in the characteristic dark loral line (Ralph Martin / www.agami.nl).

Juvenile/first-winter Tawny Pipit (Tide Mills, East Sussex, 10 October 2014). Juvenile Tawny Pipits have a strongly streaked plumage which contrasts markedly with the clean pale sandy hues of first-winters and adults. This bird, however, is in a transitional plumage state, having already started to moult into its adult-type plumage, but it still retains many dark juvenile feathers in its upperparts and it still has an extensive band of streaking across the upper breast. Any resemblance to either a Richard's or Blyth's Pipit, though, is quickly negated by this bird's obvious dark loral line (Brian Harrison).