For those of you out and about on your local patches it will come as no surprise to learn that it was an exceptionally quiet week, with scant evidence of movement. The weekend in particular was very quiet indeed considering that we are in the middle of May and things should be happening. The recent run of west/northwesterlies sweeping across northwest Europe tended to bring only pleasure to seawatchers on the Outer Hebrides and Shetland. 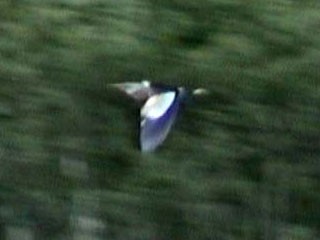 
As is usually the case, despite the fact that there were very few migrants about, a rarity or two always manages to find their way through and this week was no exception. For the second week running Dungeness in Kent was the focus of attention with a cracking male Little Bittern. This stunning individual was located at Dungeness RSPB reserve on 9th and was still present to the 14th. Frequenting Hooker's Pit, the bird was often heard in song and showed very well, ensuring that it was a popular attraction.

On Shetland a White-throated Sparrow was on Fetlar on 11th and a Western Bonelli's Warbler was at Scatness on 13th and 14th, though apart from these birds rare and scarce passerines were in short supply. A Savi's Warbler at Leighton Moss (Lancs) from 9th was the third nationally this year (following others on Scilly and Devon), and this bird deservedly proved popular as it often showed for extended periods. The first arrival of Red-backed Shrikes was noted on Shetland between the 12th and 14th with 6 birds, and Woodchat Shrikes were on Bryher and St. Agnes (Scilly) and Saltee Islands during the week. Four Hoopoes were reported, and there were half a dozen Golden Orioles and four Serins. Just two Short-toed Larks were seen, one from the 8th-10th at Northam Burrows CP (Devon) showing exceptionally well, and another on Lundy (Devon) from 12th-13th. On Out Skerries the Dark-eyed Junco remained to the 9th and a Red-rumped Swallow in Cornwall further enhanced the record statistics for this species so far this spring. A further splash of colour was provided by 2 Bee-eaters over St. Agnes (Scilly) on 14th.

Seawatchers on the Outer Hebrides were not to be disappointed with the weather forecasts and 80 Long-tailed Skuas went past North Uist on 8th, on which day 760 Pomarine Skuas were counted passing the same site, with 107 Pomarine Skuas passing Lewis and 84 over Bowness-on-Solway (Cumbria). The numbers on the 8th were easily eclipsed by a record day count of 1147 Pomarine Skuas past Balranald on 13th which included one flock of 210 birds. On the 14th, 21 Long-tailed Skuas went past Wats Ness (Shetland) as did 727 Pomarine Skuas, including a flock of 200+ birds. Passage on these dates was not picked elsewhere, and numbers were in single figures from the usual spring headlands, except for 20+ past Cumbria on 14th. A Long-tailed Skua was seen in the Solway, but was the only record away from the outer Hebrides and Shetland.


As with previous weeks there were a number of scarce waders, the pick of which was a Buff-breasted Sandpiper at Wicken Fen (Cambs) from 10th. Spring birds are relatively scarce, but when the bird began to display large numbers of birders took the opportunity to travel to the site to witness a unique event. Two Pectoral Sandpipers were noted during the week with a bird on Shetland and another in Staffs, whilst the Lesser Yellowlegs remained at Hauxley NR (Northumbs) to 11th. On Shetland the first Red-necked Phalarope was seen on Fetlar on the 13th. Small numbers of Dotterel continue to pass through with at least 43 birds during the week and at least 15 Temminck's Stints were found between Kent and East Yorkshire. A white Gyr Falcon was reported in the Findhorn Valley (Highland) on 12th and a White-billed Diver in Shetland. The female King Eider returned to Aberlady bay (Lothian) and the Bonaparte's Gull was seen again at Fairburn Ings (Yorks), with the Norfolk bird remaining as did the Londonderry bird. A hint of approaching summer was provided by three Quail, with birds in Essex, Norfolk and Devon.