Rather as you'd expect in the second week of April, the pace of spring migration appeared to quicken as each day passed. By Tuesday a great many more migrants had arrived back on our shores, including the first Lesser Whitethroats, Garden Warblers and Common Cuckoos — the vast majority of our common summer visitors have been recorded now, even if many have not penetrated particularly far north yet.

Pied Flycatchers arrived in more significant numbers throughout the week and Common Redstarts remained prevalent. Well over 200 reports of Ring Ouzel was very much as you'd expect as we approach peak time for this charismatic thrush to be passing through traditional stopover sites. The first Montagu's Harrier came in off the sea at Hill Head, Hants, on 12th.

Perfect conditions for inland patchers (easterly winds and variable amounts of murk) forced down fantastic numbers of Little Gulls on 11th, many of which were fine breeding-plumaged adults. During the afternoon, as the rain spread east, it seemed as if just about every inland waterbody sported a flock of these dainty migrants and we ended the day with close to 100 reports of this species alone! Counts of 41+ in North Yorkshire's Lower Derwent Valley and 38 at Bartley Reservoir, W Mids, were among the highest inland tallies. The first Black Tern of 2016 followed, in Northamptonshire on 12th, and small numbers of Arctic Terns also began to show up throughout the week.

One of the best finds of the week was a male Black-headed Wagtail present at Swillington Ings, W Yorks, on 9th, though it didn't linger long. Similarly brief (and even more gripping) was a stunning male Pallid Harrier photographed as it flew past one fortunate observer at South Swale, Kent, in mid-morning on 10th. 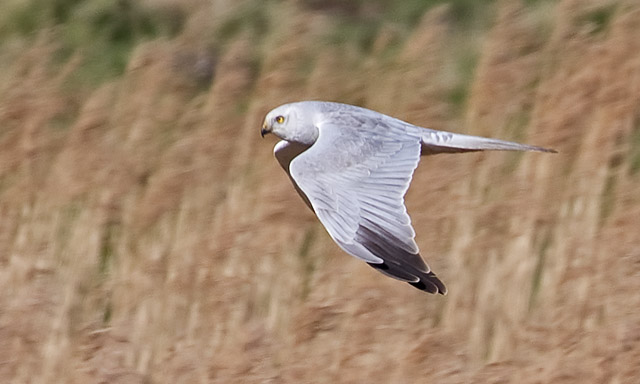 The presence of a Northern Cardinal in a private garden in Stanford-le-Hope, Essex, on 9th was interesting — though an escape always seems the most likely origin, the relative proximity of Tilbury Docks and recent presence of both Song Sparrow and Dark-eyed Junco in the Western Palearctic does make one wonder whether it might have come across the Atlantic on a ship. 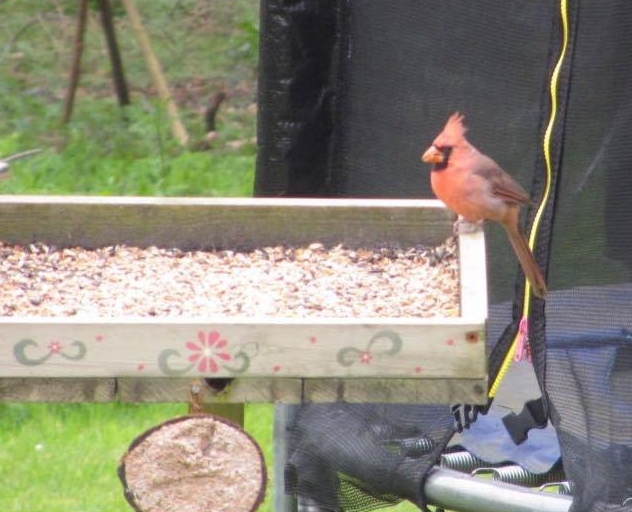 The first Iberian Chiffchaff of 2016 was reported from Higher Penwortham, Lancs, on 9th but was soon reidentified as an aberrant-singing Common Chiffchaff. Sounding very much the real deal, though, was another songster near Telford, Shropshire, from 10th onwards. A third was in song near Coverack, Cornwall, from 11th. 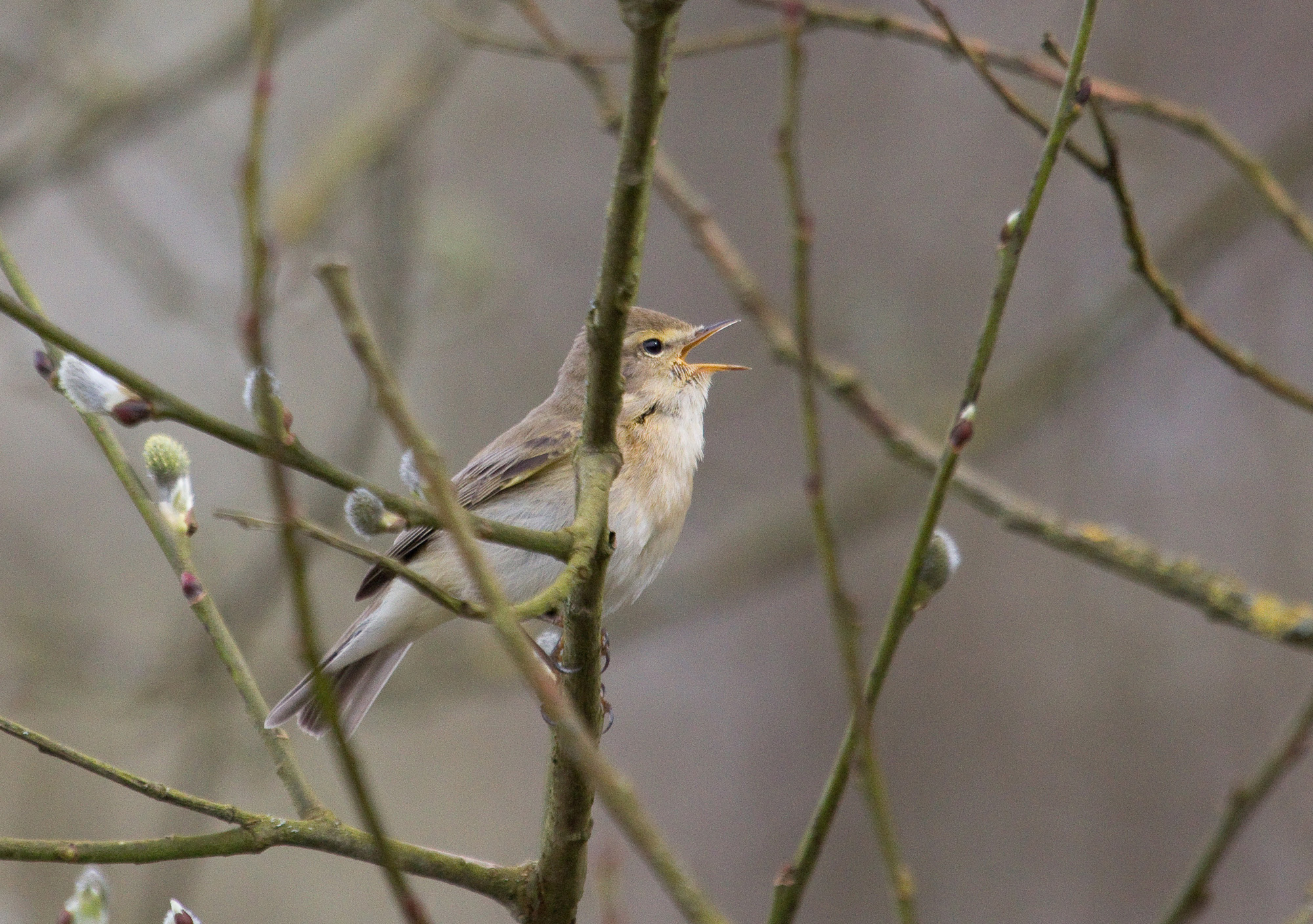 Many will remember April 2015 as being awash with Hoopoes, and although the total of 13 or 14 seen this week wasn't anywhere near the 45 recorded on the corresponding dates last year, it was still a respectable number. Three were seen in Cornwall, and there were records from different parts of Portland, Dorset, on 11th and 12th. The first Irish record of the year came from Corbally, Co Waterford, on 7th, while other notable occurrences came at London Wetland Centre and Burnham Thorpe, Norfolk, both on 9th. Overshoots were otherwise at a premium, although Portland registered brief European Serins on 9th and 12th, with further individuals at Rainham Marshes, London, on 9th and Tinker's Marshes, Suffolk, on 10th. A subalpine warbler was in a garden at Reydon, Suffolk, on 12th, and there was a Woodchat Shrike on the Lizard, Cornwall, the same day.

A rather delicious adult Purple Heron showed on and off at Wat Tyler Country Park, Essex, for five days from 6th and another flew past Reculver, Kent, on 11th. Cattle Egrets remained in Somerset, Devon and Counties Wexford and Sligo; two were found at Durley, Hants, on 7th and there were also records from Boyton Marshes, Suffolk, on 7th and Chesterton, Cambs, from 8th. Ten Glossy Ibises were seen, including two together in Co Wexford and at least one new bird in Kent. 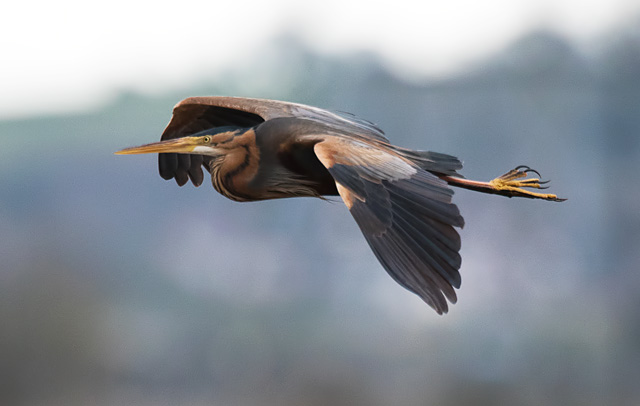 A puzzling series of White Stork records from around Norfolk leaves it difficult to put a figure on the exact number of birds currently in the county, but it seems all are free-flying escapes rather than genuine migrants. Elsewhere the three reported over Campsey Ash, Suffolk, on 12th may be better candidates for wild birds. Last week's bird in Somerset was last noted at Tealham Moor early on 8th and may account for fly-overs in Gloucestershire that afternoon and in Worcestershire on 10th. One was in the Teifi Marshes area on the Pembrokeshire/Ceredigion border from 10th. Fly-overs were reported from Woolmer Pond, Hants, on 8th and Dungeness, Kent, on 10th. An unringed bird was photographed on private land near Countesthorpe, Leics, on 11th and one flew over Tremadog, Gwynedd, on 12th. 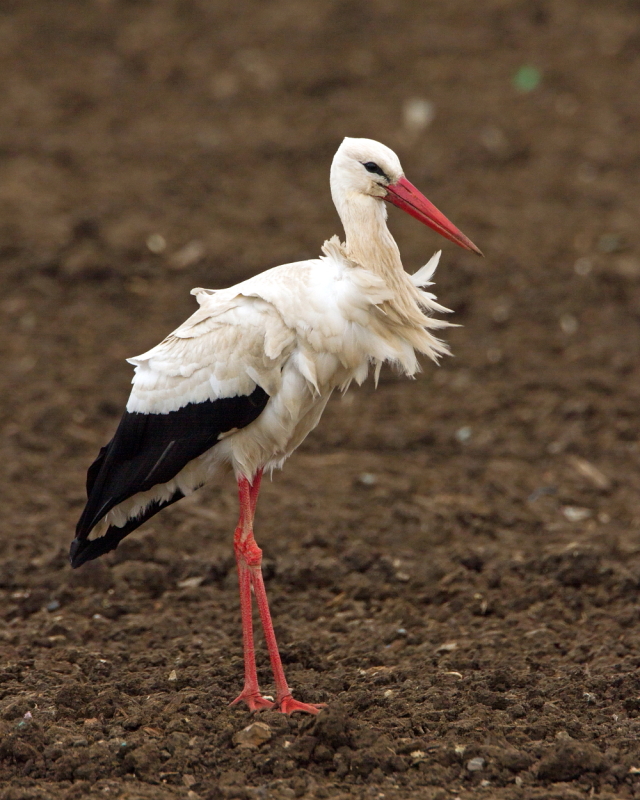 A White-billed Diver drifted past Lossiemouth, Moray, on 7th and another was still off Burghead on 8th. A third was briefly on Loch Broom near Ullapool, Highland, on 11th and the long-stayer continued off South Ronaldsay. The Cornish Pacific Diver was still off Marazion on 8th. Last week's stratospheric Surf Scoter count in Co Mayo was not replicated, though an impressive five (two drakes) were noted off Salterstown, Co Louth, on 9th and two drakes were again off the Conwy coast on 9th. Others remained in North Yorkshire, Lothian and Fife. King Eiders continued in Fife and Co Wexford.

It was the first week for a long time in which there were no reports of American Wigeon, though at least 14 Green-winged Teal were logged, these including new birds in the likes of Ayrshire, Lancashire, Cheshire and Lincolnshire, as well as two still at Loch Flemington, Highland. Eight Ring-necked Ducks were noted, including a smart drake new in at Kilvington, Notts, on 6–7th and three still near Waterville, Co Kerry, on 8th. The ever-faithful Lesser Scaup prolonged its stay in Cardiff Bay, Glamorgan, to at least 9th. The white-morph Ross's Goose remained at Bathgate, Lothian, to 9th and was probably the white goose seen flying north among Pink-feet at Skinflats Lagoon, Forth, on 12th. A Cackling Goose remained on Islay, Argyll. 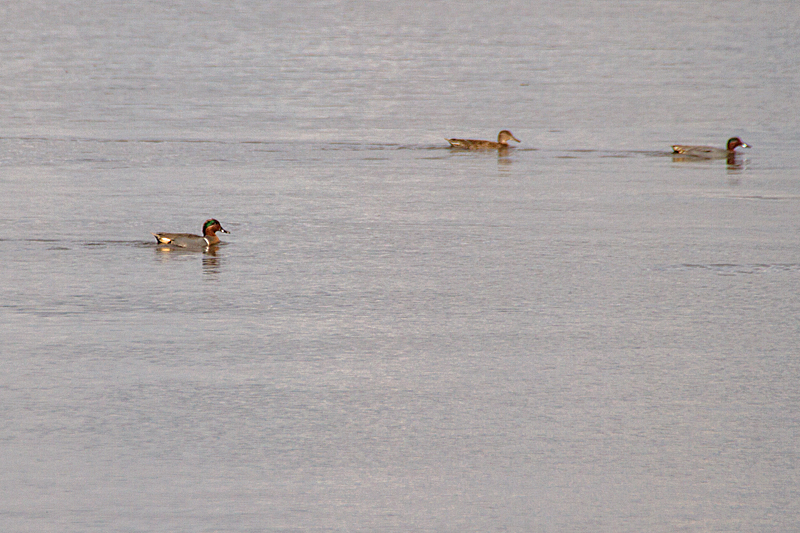 The North Uist Gyr was last reported shortly after midday on Saturday but was not seen again despite searching. Rough-legged Buzzards were seen in Highland, Essex and Norfolk (2). A Black Kite report from Wrentham, Suffolk, on 7th presumably related to the long-staying escapee last reported in the area in May 2015. 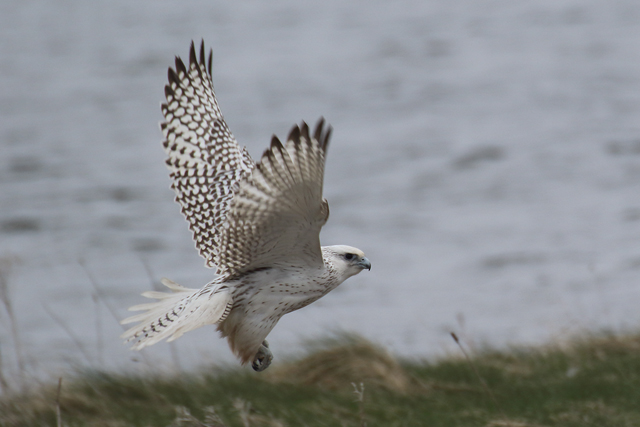 After its reappearance last week the Hudsonian Whimbrel was still at Perranuthnoe, Cornwall, to 9th. As well as Long-billed Dowitchers still present in Hampshire, Rutland and Northumberland, a new bird — just beginning to commence moult into summer dress — was discovered at Sandwich Bay, Kent, on 8th and lingered to at least 11th. The first Kentish Plover of 2016 popped up at the entirely predictable location of Dawlish Warren, Devon, on 10th but wasn't seen subsequently. A Black-winged Stilt in East Sussex on 12th was timely, though its choice of location, Weir Wood Reservoir, perhaps wasn't quite as expected.

The Glaucous-winged Gull was still in Co Cork on Sunday and the American Herring Gull continued on Barra, Outer Hebrides, all week, while the juvenile was again at Drift Reservoir, Cornwall, on 8th and 12th. All but one of the week's six Ring-billed Gulls were in Ireland, the exception being the second-winter on the Hayle Estuary, Cornwall. The Devon Bonaparte's Gull was at Bowling Green Marsh from 8th. 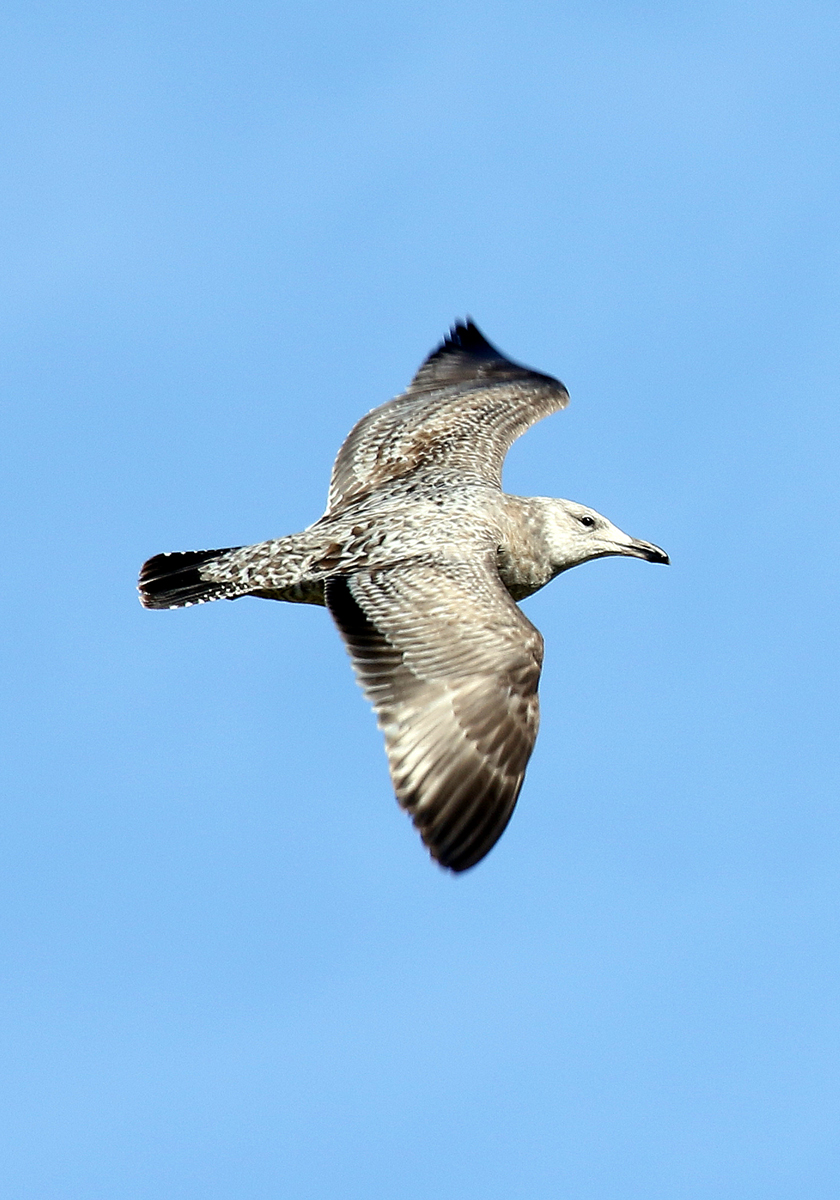 Familiar faces included the Pallas's Warbler still in Dorset on 12th, the Yellow-browed Warbler still at Brent Reservoir, London, two Richard's Pipits still at Flamborough Head on 10th and the Shore Larks still at Hartlepool, Cleveland. The only remaining Penduline Tit was at Strumpshaw Fen, Norfolk, to 10th. A Rose-coloured Starling appeared at Land's End, Cornwall, on 6th; given the early date this bird presumably wintered somewhere not too far away. A slice of winter came in the form of a Hornemann's Arctic Redpoll on Fair Isle from 8–12th. 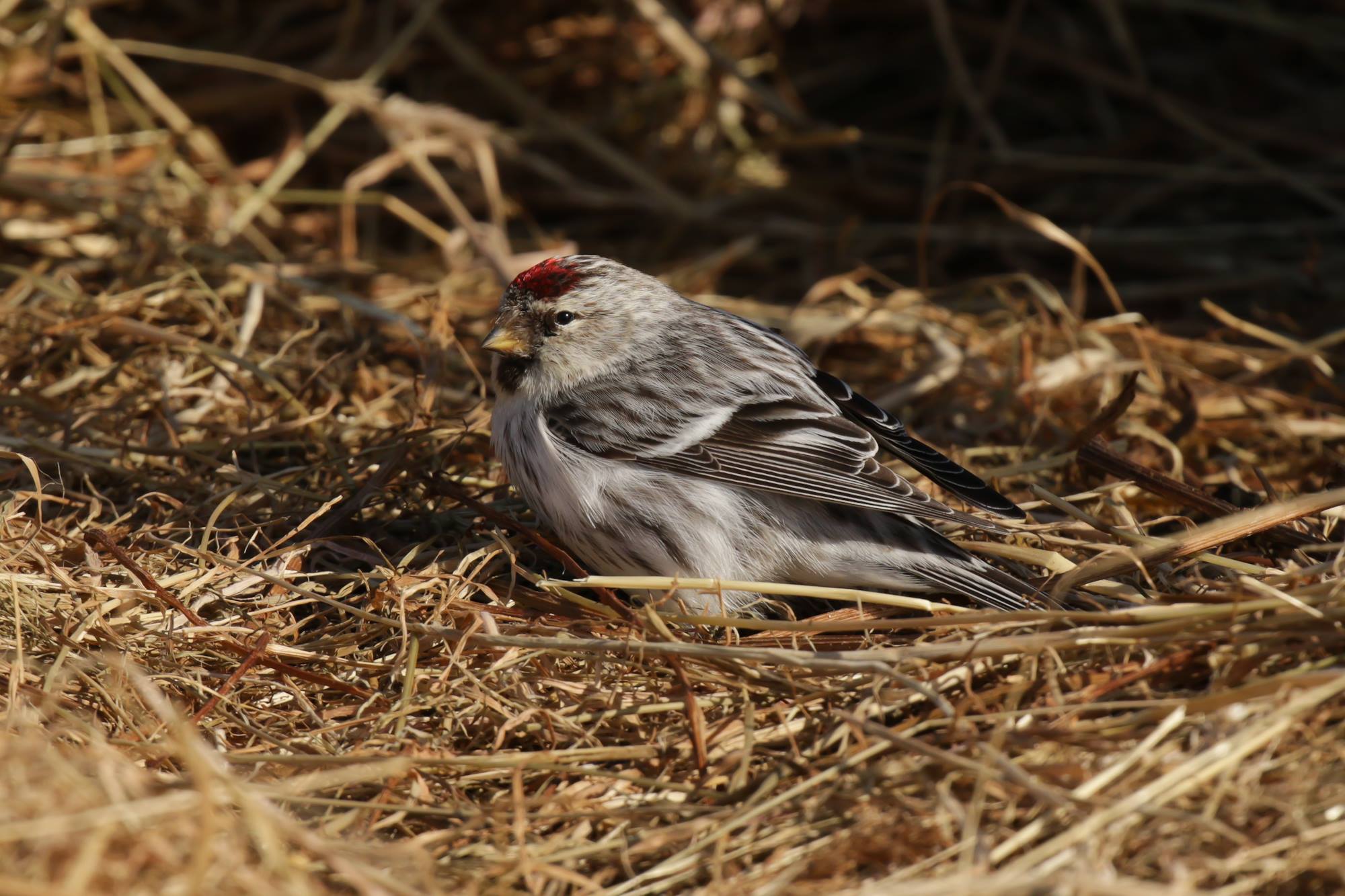 The main talking point of the week was an amazing displacement of Alpine Accentors in Germany, which saw well over 20 recorded out of range. A flock of around 20 was present on Grosser Feldberg, Hessen, on 7th, with a further two at Helfenstein and, most significantly in a British context, two among migrant Ring Ouzels in fields near Cuxhaven, on the North Sea coast. Associated with this movement was a handful of White-winged Snowfinches including one on the island of Heligoland over the weekend. The first Polish record for 100 years came from Radomsko on 11–12th. Either species would be hugely appreciated on the British east coast in the coming weeks!

In a Western Palearctic context, though, the biggest find was a Song Sparrow on the German island of Amrum on 7th. Lingering to 9th, it represents the latest in a string of continental records of this species and was a stark reminder that it's now been over 21 years since the last twitchable British bird. To add insult to injury (at least for us Brits on the other side of the North Sea), the Black-browed Albatross returned to Heligoland on Thursday and was again showing to within feet for several hours on Saturday — here's hoping for another British visit this summer, and hopefully for longer than a few minutes! 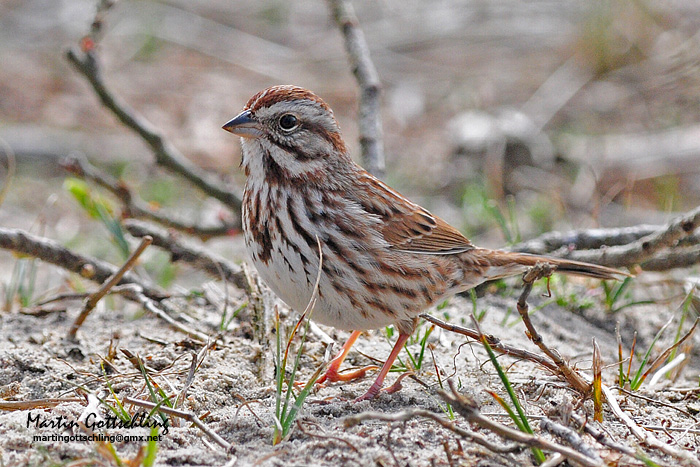 Never to be left out, Dutch birders unearthed a smart Forster's Tern on Texel, Noord-Holland, on 10th which lingered thereafter. The Siberian Rubythroat was also still present on Tuesday at least and a Black-winged Kite in Noord-Holland is presumably last week's bird relocating. A drake Steller's Eider south of Oslo, Norway, was again tantalisingly close for British birders, while the Stejneger's Scoter also remained in Nord-Trøndelag and the Oriental Turtle Dove in Hordaland. Elsewhere the Solitary Sandpiper and Black Heron continued on Santiago, Cape Verde, and a female Oriental Honey Buzzard migrated over Eilat, Israel, on 11th. 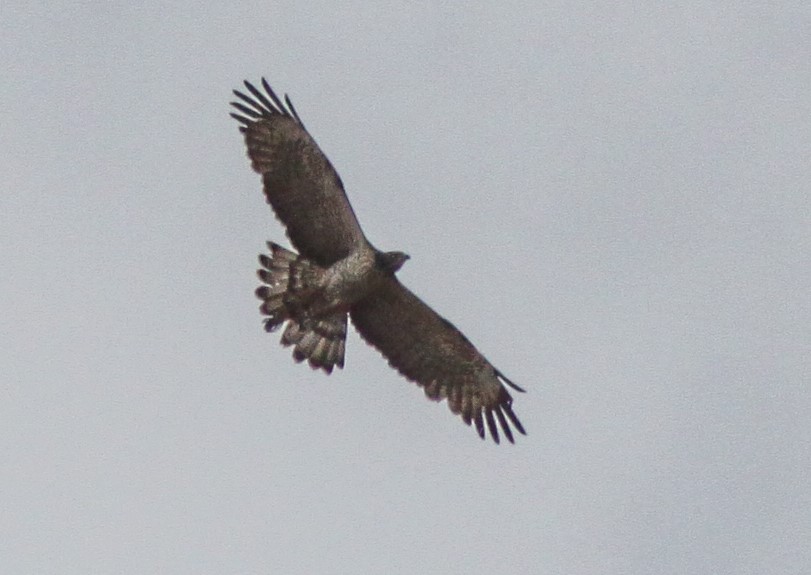