After all the excitement of the past few weeks, things settled down a little, though there were still plenty of rare and scarce birds turning up to keep folk on their toes and patchwatchers hoping.

As the years go by our expectations for rarities continue to change, with birds which were once extremely rare now part of the annual rarity scene. Blyth's Reed Warbler is a nice example of such a change. At the time one appeared at Spurn on 28th May 1984 it was a species that few birders knew much about, and was the first English record since the influx of 1912. Times change, and by the end of 2001 nearly 50 birds had been accepted by the BBRC, a number of which have performed well for large numbers of birders. These statistics represent a dramatic change in fortune in a short timeframe. This change in status is largely due to the westward range expansion in Fenno-Scandia and the Baltic, together with greater observer awareness and competence. Of course many of us take rarities for granted, but regular rarities might not always be so. At the other end of the spectrum is the Lesser Grey Shrike, which was formerly a regular rarity, but in recent times has declined sharply, perhaps due to climatic factures and changes in farming practice in parts of its range. Birds, rarities included, are superb barometers of what is happening in the world around us!

Yet another White-throated Sparrow was found during the week. A 1st-summer male was seen at Schoolton, Fair Isle on the 9th. The bird showed well for the morning, and occasionally sang, but was not seen subsequently. This was the 3rd record for this famous island, and the first since 1978. There have been nine previous accepted records for Shetland, seven of which have been between 5th May and 17th June. This bird follows hot on the heels of a one on Fetlar on 11th May, and another on the Wirral in late May and adds further to an excellent spring for Nearctic sparrows. 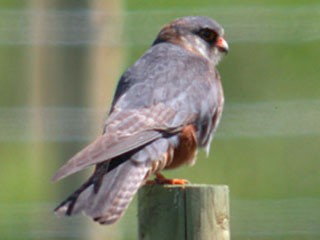 
Also on Fair Isle a Lesser Grey Shrike was present at The Kirk on the 5th and was the first record for the island since 1993. This was formerly a regular rarity to these shores but is now reduced to just about annual status. In East Yorkshire a Blyth's Reed Warbler was trapped at Spurn on the 9th. A Greenish Warbler on Portland on 7th fits spring occurrence patterns of the species nicely. It has been a subdued spring for Subalpine Warblers, but three during the week included a male on Fetlar on 7th, one on Stronsay on the 8th and the female again on Fair Isle. On Anglesey, the superb Black Lark entertained visitors to the site until late on the 8th and in Devon the Iberian Chiffchaff remains at Kingswear. A scattering of rare waders included a Broad-billed Sandpiper at Saltholme Pool (Cleveland) on 6th, Kentish Plover at Ibsley Water (Hants) on 8th and a Red-necked Phalarope at Conwy RPSB (Conwy) on 8th. A 1st-summer Bonaparte's Gull was at Lough Neagh (Co. Armargh) on 11th, with the 1st-summer last reported at Farlington Marshes (Hampshire) on the 6th. Two White-winged Black Terns during the week included one still at Loch of Tankerness (Orkney) to the 8th and one at East Chevington (Northumberland) from 10th. At least five Red-footed Falcons were reported during the week, including a 1st-summer male in Kent from the 9th onwards. In Co. Kerry the Alpine Swift continued to be seen at Brandon Head to at least the 10th (first seen on the 3rd).

For the fourth summer on the trot a flush of early June Rose-coloured Starlings arrived. A dozen birds is well below the record numbers of last year (around 130 in June alone) and the good numbers in 2001 (when 30 or so arrived in June), but is a noteworthy arrival. Birds have been reported from: The Lizard (Cornwall) from 4th-10th; Portland (Dorset) on 5th; Kilnsea (East Yorkshire) on 5th; near Caernarfon (Gwynedd) 6th and 8th; Lundy (Devon) 6th-11th; Strumble Head (Pembroke) 7th; Port Mulgrave (North Yorkshire) 7th-8th; Isley Marsh (Devon) 8th; South Gare (Cleveland) 10th; Westleton and Sizewell (Suffolk) 11th and; Foula (Shetland) 11th. No doubt others are consorting with Starling flocks elsewhere, awaiting detection!

Small numbers of scarce migrants continued to be reported. At least nine Red-backed Shrikes included a bird in the West Midlands, four Common Rosefinches included a showy bird at Scarborough (N. Yorks), whilst there was a single Bluethroat at Spurn, Marsh Warblers in Northumberland and Shetland and Short-toed Larks at Blakeney Point (Norfolk) and North Ronaldsay (Orkney). A nice splash of colour was added by European Bee-eaters in Pembrokeshire, East Yorkshire and Dorset and a Tawny Pipit was at Point of Ayr from 9th-10th. Four Great White Egrets were seen during the week, all briefly except the returning bird at Longhirst Flash (Northumberland) present from the 8th. Continuing with herons, a Purple Heron was at Ham Wall RSPB (Somerset) from 7th to at least 11th, with another reported at Slapton Ley (Devon). In Co. Wexford the 1st-summer Forster's Tern continues to reside at Lady's Island Lake. Finally, the summer plumaged Sabine's Gull at Lowestoft (Suffolk) continues to attract visitors from near and far as well as taking time out to eat the odd chip or two...