There was a lull in proceedings this week, but with the start of 'autumn' just around the corner it will not last for long! 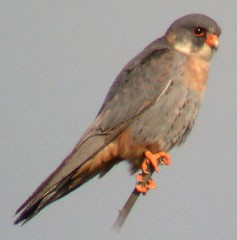 Three Red-footed Falcons were reported, the pick of which was a stunning 1st-summer male at Pingewood GPs (Berkshire) from 4th to at least the 9th. In Lincolnshire one was still present at Langtoft Pits to at least the 8th and a male was seen at Sandwich Bay (Kent) on the 7th. Remaining with raptors, the Black Kite continues to show well at Loch an Ruthair (Highland). This bird has been present since mid-May and also summered there in 2002. There have been over 35 Black Kite reports this spring and early summer, though only a couple have remained for a short stay. Despite their relative 'abundance' nowadays, Black Kites remain notoriously difficult to catch up with as most are 'fly-overs', so a long-staying bird is most welcome.

On the sea, a 1st-summer Ross's Gull was reported flying south past Whitburn (Durham) on 3rd, another Wilson's Petrel was notched-up by pelagic-birders to the south of the Isles of Scilly on 3rd and Long-tailed Skuas slinked past Norfolk, Cumbria and Durham. A Gull-billed Tern was reported at Shoeburyness (Essex) on 5th and a White-winged Black Tern at Gronant (Clwyd) from 5th-8th. A Glaucous Gull was in Northumberland from 5th-9th, present at Amble after earlier passing Hauxley NR, and another was at Toft (Shetland). An adult Ring-billed Gull was at Nimmo's Pier (Galway) on the 4th and the 1st-summer remained at Helston (Cornwall).

Rare herons included Great White Egrets on the Cam Washes (Cambs) from 8th to early on the 9th, with others at Cliffe Pools (Kent) and Hambledon (Hants) on 9th and a report of two at Northward Hill (Kent) on 4th. A Night Heron of unknown origin was seen at Trowse (Norfolk) on 6th and 8th and Purple Herons were reported at Par Beach Pool (Cornwall) on 3rd and over Ramsgate (Kent) on 9th. Scarce waders were in short supply, with a Kentish Plover at Walton-on-the-Naze (Essex) on 5th, Pectoral Sandpiper at Tacumshin (Wexford) on 5th, with another reported at Bude (Cornwall) from 3rd-6th and Temminck's Stint over Tetney Marshes (Lincs) on 4th.


A fresh flush of Rose-coloured Starlings included birds at Chandlers Ford (Hants) on 2nd, Rhôs-on-Sea (Conwy) from 8th-9th, Custom House (London) on 6th and Port Talbot (Glamorgan) from 8th. A handful of Bee-eaters included one over Rye Harbour (E. Sussex) and then Dungeness (Kent) on 6th, with one over Holkham (Norfolk) on 6th, with perhaps the same over several Norfolk sites on 8th, with birds at St. Margaret's (Kent) on the 8th and Newbridge (Gwent) on the 9th. Inland male Red-backed Shrikes included birds at Potton (Beds) and Narborough (Norfolk) on 6th. A Common Rosefinch was reported briefly at Bridport (Dorset) on 6th. From last week the male Serin remained at Everton (Beds) until the 8th and in Durham the Melodious Warbler was last seen on the 7th.