Another exceptional week for rarity hunters, with most of the attention deservedly focused on Anglesey. There were pickings to be had elsewhere, but the spring looks set to pass without a fall of note. It will long be remembered as a stunning period of mega rarities, but for those who like to feel migration around them and chance upon a goody or two of their own it has certainly been hard work for all but the devoted. 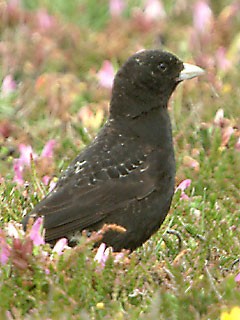 Certain species of bird have a mystique associated with them, and in Europe Black Lark is certainly one of this exclusive club. Found from the River Volga to Kazakhstan and Central Asia it is a species that until relatively recent had been seen by few European birders as these areas were inaccessible to travelling birders. With just 18 European records away from its breeding and wintering areas it has always been a long shot that one might turn up in Britain. Formerly on the British list on the strength of the infamous 'Hastings Rarities', these records were of course discredited and birders could only dream. Recent records in Poland in 1988, Finland in 1989 and a male in Sweden in May 1993 gave us all hope that the impossible might just be possible. Sanity for many birders was broken on Sunday evening with news of a male at South Stack RSPB reserve on Anglesey, which came as a numbing bolt through the head for most of us.

Those travelling straight away faced frustration as the bird was not seen from mid-evening onwards during heavy rain. It was a tense scene at the site on Monday morning as there was initially no further sign, then immense relief as the lark was found to be still present. Fortunately this superb male has remained all week, frequently showing exceptionally well on two areas of burnt heather, enabling birders form near and far to enjoy this unique event. The aesthetically pleasing setting of the area no doubt added to the enjoyment of most and the reserve staff are to be congratulated for their superb co-ordination of the whole event ensuring that all visiting birders enjoyed prolonged fantastic views of the bird. One can only speculate at the loss to British business through absenteeism this week!!

A Turkestan Shrike (phoenicuroides form of Isabelline Shrike) at Porlock Marsh (Somerset) on the 3rd was another species originating from a similar area to the Black Lark. This is the rarer of the two forms of Isabelline Shrike occurring in Britain. The Black Lark and Turkestan Shrike correlate nicely with northwest European records of Rock Bunting in Denmark, Trumpeter Finch in The Netherlands and an Eastern Olivaceous Warbler in Denmark. All of these fantastic rarities cross distribution paths to the east of the Caspian Sea, they all occurred at the same time, and they presumably overshot through conducive weather systems to northwest Europe. What else is still out there waiting to be found?


Elsewhere there was still plenty of interest to capture the attention of birders up and down the land. A Squacco Heron was at Aberlerry (Ceredigion) from 3rd onwards, and a Black Stork was at Goonhilly Downs (Cornwall) on 29th. An influx of Red-footed Falcons brought up to 16 birds into southeast England, the most northerly of which was one heading south in North Yorkshire; up to 4 were present at Hickling Broad (Norfolk). Drifting easterlies brought Red-throated Pipit, Little Bunting and Short-toed Lark to Blakeney Point (Norfolk) between 30th and 1st, with Rustic Bunting on Fair Isle on 29th and a Thrush Nightingale trapped on Foula on 30th remained to the 1st. A Greenish Warbler was trapped on Foula on 3rd and another was on Skokholm on 4th. In Norfolk a Sardinian Warbler was at Winterton Dunes on 4th and Ortolan Buntings were at Scatness and South Stack. During the week seven Woodchat Shrikes were found with one in Highland noteworthy.

A Collared Pratincole was an excellent find at Loch of Tankerness (Orkney) on 31st. Wader interest was restricted to a Pectoral Sandpiper at Farlington Marshes (Hants) from 3rd and a Kentish Plover at The Naze (Essex) on 1st. A scattering of Temminck's Stints were found during the week. A Gull-billed Tern was reported in South Yorkshire on 29th, but unfortunately did not linger and yet another Bonaparte's Gull was found, this time a 1st-summer at Farlington Marhses. A summer-plumaged Sabine's Gull at Lowestoft from 31st onwards proved very popular and photogenic, and another was reported past Portland on 29th. A Spotted Crake was a rare spring find at Inner Marsh Farm from 30th-31st. An unseasonable White-billed Diver was seen off Foula on 30th.


Yet again scarce migrants were in short supply. Red-rumped Swallows were seen in Devon and Shetland and Alpine Swifts were in Co. Kerry and Dorset. European Bee-eaters were seen all too briefly over Northants and East Yorkshire and a handful of migrant Golden Orioles were scattered between Scilly and Shetland. Just under a dozen Red-backed Shrikes included inland birds in Cambridgeshire and Cheshire, though there were just single Bluethroat and Melodious Warbler. Five Icterine Warblers were present between the famous locations of Flamborough Head and Fair Isle, with several Marsh Warblers reported, including two on St. Mary's. Common Rosefinches have been in short supply this spring, and just eight were reported, the most notable of which was a brief visitor to a garden feeder at Alcester (Warwickshire) on the 29th. An exceptional influx of Red Kites to Cornwall brought a Black Kite with them, and presumably originated from the Continent.

Several long-stayers remained during the week, including Little Bitterns on St Agnes and in Cornwall, whilst the Forster's Tern remained in Co. Wexford and the Whiskered Tern was last seen at Dungeness on the 29th. In Argyll the Rose-coloured Starling continued to show well and as we move into the first week of June more can be expected to occur shortly.

Then of course, there's what might have been – but that is greedy isn't it? Out of interest: the last of 7 British records of Trumpeter Finch was in Highland on 4th June 1992 and the last of 5 records of Rock Bunting was on Bardsey on 1st June 1967!