After a very cold week that saw widespread snow and overnight frosts, light finally appeared at the end of the tunnel as the May Bank Holiday weekend arrived. Biting northerlies abated and temperatures gradually began to rise towards normal again as Britain and Ireland welcomed back somewhat more spring-like conditions. The birding, too, seemed to improve: major new rarities were discovered, another was finally pinned down in Kent and migration got going again after the previous week's setback.

For pure rarity value, it is impossible to beat Britain's sixth White-crowned Sparrow extracted from a mistnet at Woolston Eyes, Cheshire, on the morning of 30th. Seen again just a couple of times after its release (and not past 11:45 despite extensive searching), this North American stunner unfortunately evaded the attention it would undoubtedly have attracted. Interestingly, the pale lores and orange-toned bill would appear to suggest that this bird is of western origin (subspecies gambellii breeds widely across the taiga of western North America, though a large zone of intergradation exists). This in itself would be a first for Britain, and probably just the second for the Western Palearctic following a similar-looking bird in the Azores in October 2013. More details here. 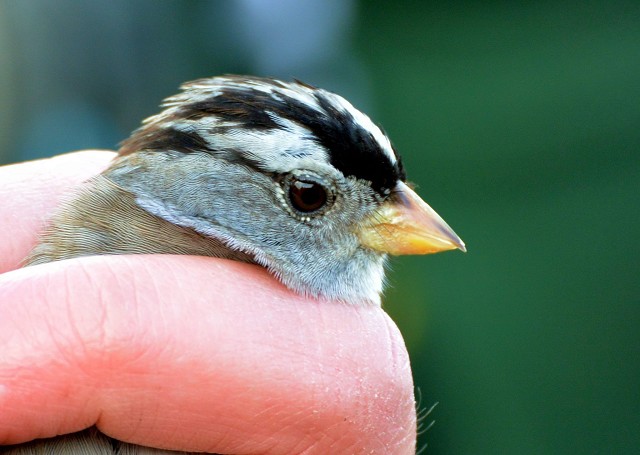 Further excitement from across the pond came in the form of a first-summer male Rose-breasted Grosbeak on West Burra, Shetland, on 3rd. Spotting it visiting her garden feeders, quick-thinking homeowner Lynn Goodlad took a selection of photographs and posted them on a local Facebook group, where the identification was almost instantly confirmed. Though not quite pristine in plumage, this is arguably the 'best' ever seen in Britain — the only other spring record relates to a first-summer female at Holme, Norfolk, on 4–5 May 2006. 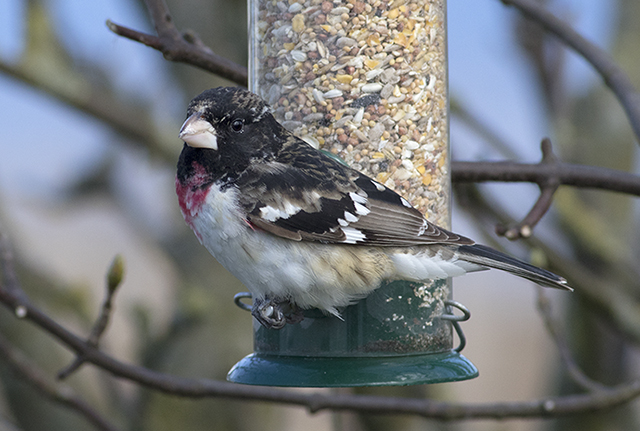 As if that wasn't enough for arrivals from the west, a male Belted Kingfisher was belatedly reported from Co Londonderry on 28th — the bird, apparently a male, had been seen on the River Bann near Coleraine on 22nd but not again. Further belated news concerned the second Alpine Accentor of the spring, coincidentally seen on Scolt Head Island, Norfolk, on the same day as the Hampshire bird but suppressed until 3 May.

Great news for Kent and London listers alike came on Friday when the meena Oriental Turtle Dove, present in Otford since 18 February, was finally pinned down for all to see. It established a pattern of posing in trees both early morning and again from late afternoon, and many were able to twitch it as it showed at least twice daily over the weekend and to at least 3rd. Many thanks to Kent recorder Barry Wright and the contingent of hard-working local birders who made the twitch possible. 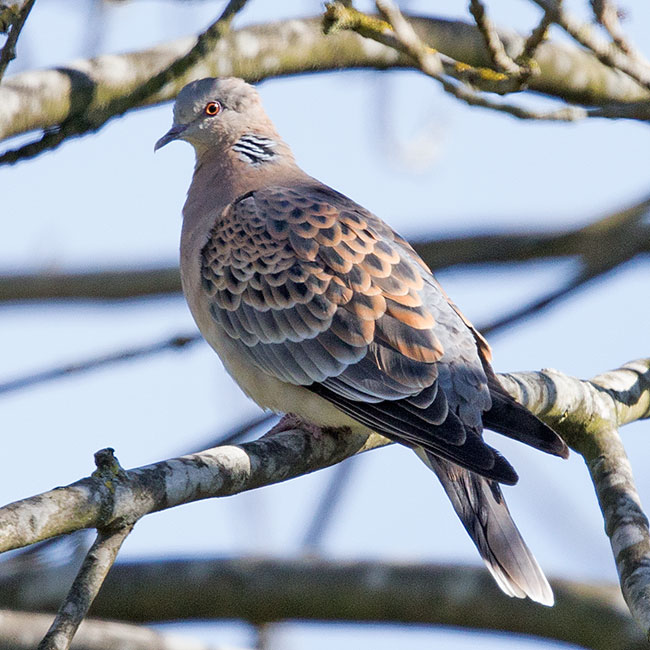 Long-stayers included the Hudsonian Whimbrel, still present near Marazion on 30th, and the Glaucous-winged Gull, which has surprised most by lingering at Castletownbere into May (it was still there on Monday). The Snowy Owl also continues to alternate between Bryher and Tresco, Scilly, but is somewhat intermittent in its appearances. 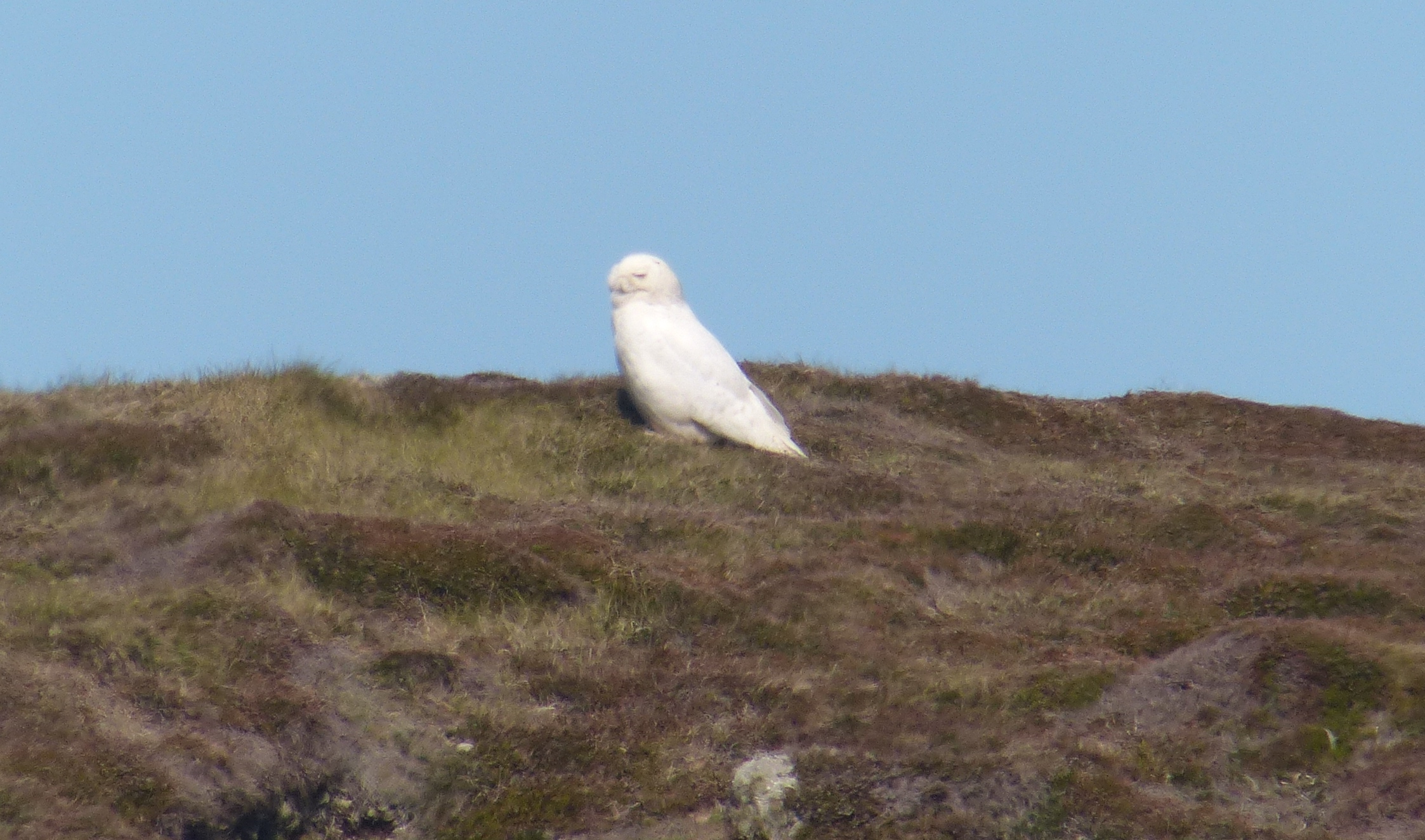 A smart Black-headed Wagtail was discovered at Titchwell, Norfolk, on 2nd but proved frightfully elusive; it was seen again briefly the following day but was frankly a nightmare to pin down. A couple of possible Iberian Chiffchaffs were reported (at Conwy RSPB on 30th and Godolphin, Cornwall, on 1st) in addition to males still holding territory in Shropshire and on Scilly — though the Kent bird was last noted in Margate on 28th. Incidentally, last week's Bonelli's warbler in Cornwall turned out to be a Western, based on DNA analysis. Another Western Bonelli's was trapped and ringed at Alderney Bird Observatory on 29th, the day after a Western Subalpine Warbler there. On nearby Jersey, a Savi's Warbler was trapped and ringed at St Ouen's Pond, while the male continued to advertise itself at Minsmere, Suffolk, all week. 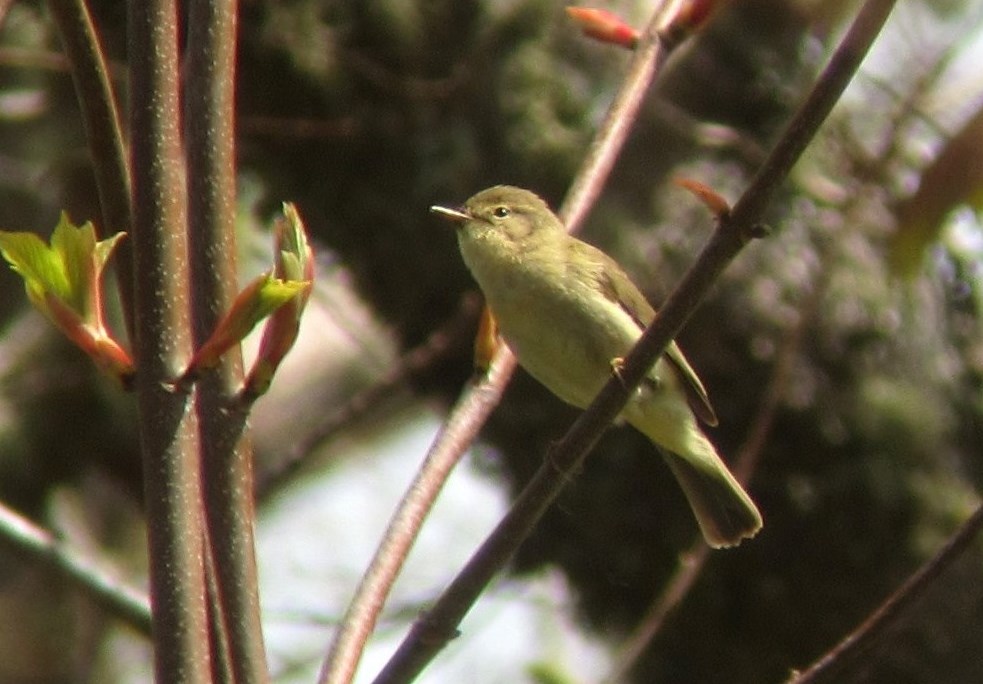 Rather like the return of an old friend, it was pleasing to hear of the reappearance of the drake Lesser Scaup, bearing red nasal saddle 'VH', in Clyde on 30–1st. The sighting at Lochwinnoch is the first resight of this bird since it was logged in West Yorkshire in mid-May 2015. Elsewhere the Cardiff Bay bird was still around on 2nd. A new drake Ring-necked Duck popped up on Islay, Argyll, on 29th and another remained in Co Down. The drake American Black Duck was still at Strontian, Highland. All four of the week's Green-winged Teal were in Scotland, with new birds on Tiree and in Clyde. A Black Brant was at Blakeney, Norfolk, from 27th and another lingered in East Yorkshire. 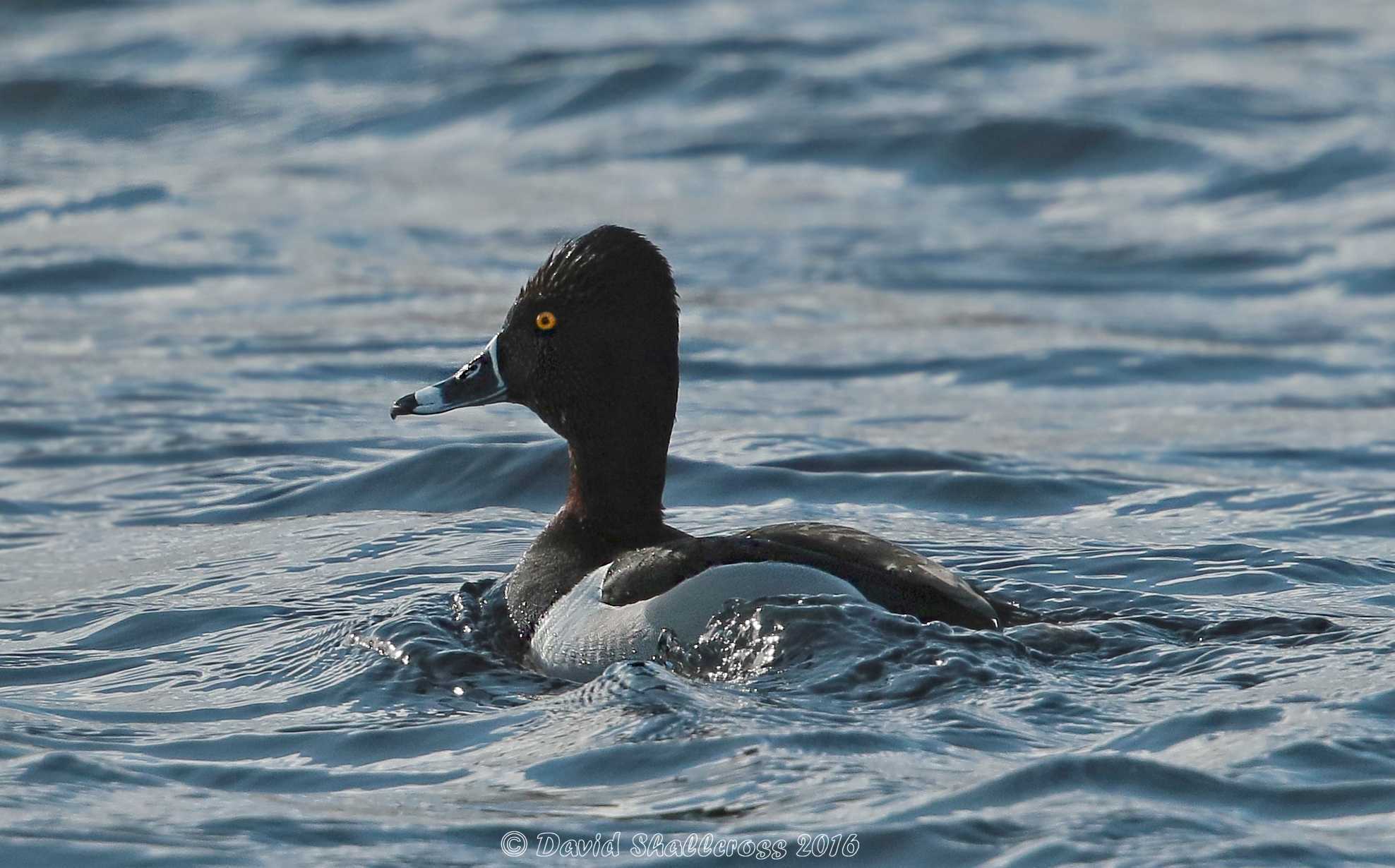 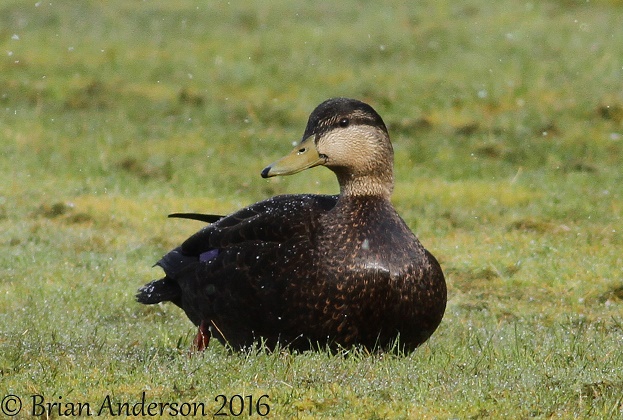 This year's White-billed Diver tallies in the Moray Firth have only occasionally hit the peaks we've come to expect in recent years, but up to five were regularly viewable distantly from land off Portsoy this week and nine were seen from a boat off there; two further individuals were off the Moray coast. A new bird was off Skye on 30th, with further records from Orkney and the Outer Hebrides (2). Drake King Eiders remained on the Ythan Estuary, Aberdeenshire, and at Achiltibuie, Highland. At least one Surf Scoter continued in Lothian.

The first Black Stork of the season drifted over Leith Hill, Surrey, on 28th. Away from the bewildering array of White Stork records in Norfolk, fly-overs were noted in East Sussex on 26th, West Sussex on 27th, Hertfordshire on 28th, Leicestershire on 2nd and Kent on 3rd. Two Purple Herons were still at South Huish Marsh, Devon, on 27th, with one still on 29th. Others were reported in Kent, Suffolk, and Co Cork. Just one Cattle Egret was seen this week — the Pagham Harbour bird — and it wasn't noted past 28th. In contrast there appears to be have been something of an influx of Glossy Ibis, with birds reported from 15 sites across Britain and Ireland including two in-off at Winterton, Norfolk, two at Carryduff, Co Down, and three at Cahore, Co Wexford. 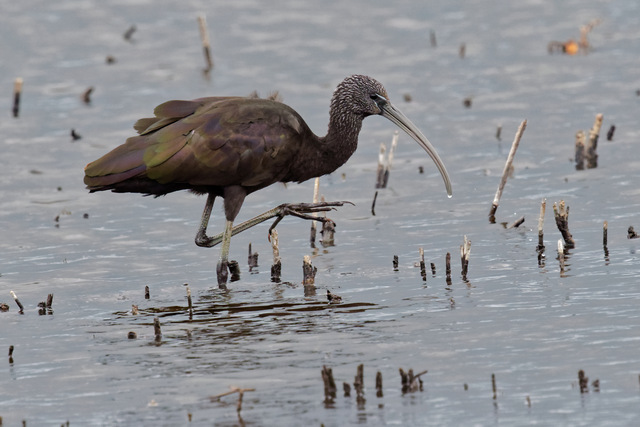 Black Kite reports came from Stornoway, Lewis, on 27th, two sites in Lincolnshire, Blashford Lakes in Hampshire, and Thurrock in Essex, all on 30th, and Hen Reedbed in Suffolk on 3rd.

Long-billed Dowitchers were last seen at Cresswell Pond, Northumberland, on 27th and Pennington Marshes, Hants, on 28th. A White-rumped Sandpiper flew past Walney Island, Cumbria, on 3rd and a Lesser Yellowlegs called in at Loch Gruinart, Islay, on 2–3rd. The first Temminck's Stint touched down at Cley, Norfolk, from 27–30th. An amazing 10 Black-winged Stilts arrived at Pulborough Brooks, W Sussex, on 2nd but had moved on by the following day. Two were at Steart, Somerset, on 30th, while a female showed well at Frampton Marsh, Lincs, on 30th. A male Kentish Plover spent the day at Ferrybridge, Dorset, on 1st and an American Golden Plover showed well at Angle, Pembrokeshire, on 29th. 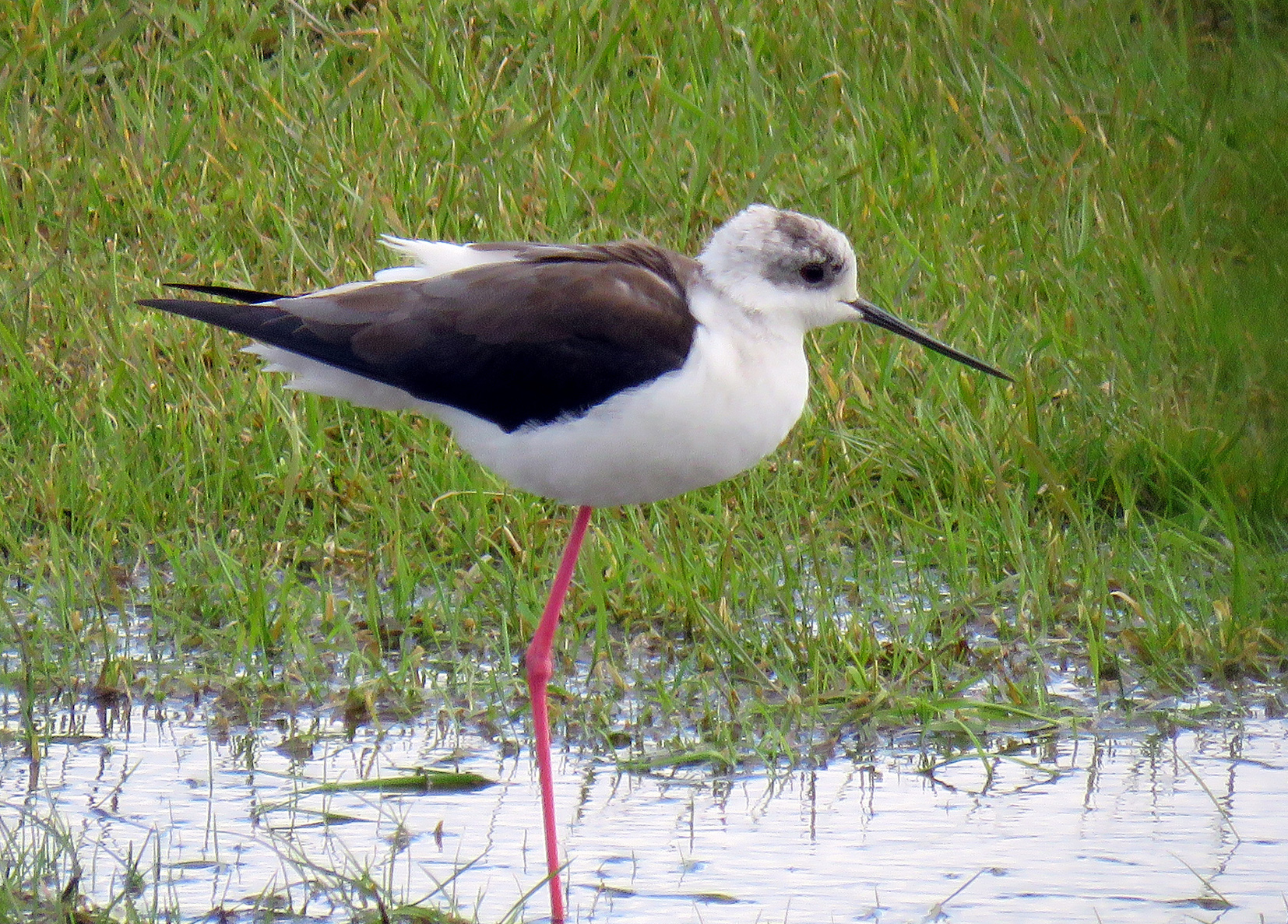 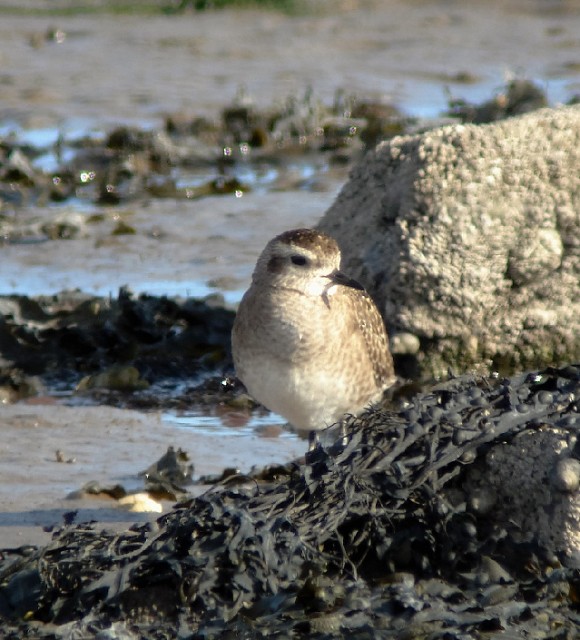 A nice scattering of Dotterel saw birds reported from 13 sites. The peak count was of 18 in coastal fields around Choseley, Norfolk — this traditional location held birds for the best part of a month last year, so it'll be interesting to see how long they stick. Other notable occurrences included one at the Butt of Lewis on 2nd, two on Burgh Marsh, Cumbria, on 28th and three near Martin Mere, Lancs, on 27–28th.

The adult Bonaparte's Gull continued in Co Wexford and the American Herring Gull was again at Drift Reservoir, Cornwall, on 2nd. An adult Kumlien's Gull was near Belmullet, Co Mayo, on 2nd.

A total of 14 Hoopoes were noted across Britain and Ireland and included one as far north as Forvie, Aberdeenshire, on 3rd. Wrynecks totalled 11, the bird in gardens at Cley, Norfolk, being by far the most accessible (though it was not seen after 29th). A Woodchat Shrike was at Holywell, Cornwall, from 30–2nd. 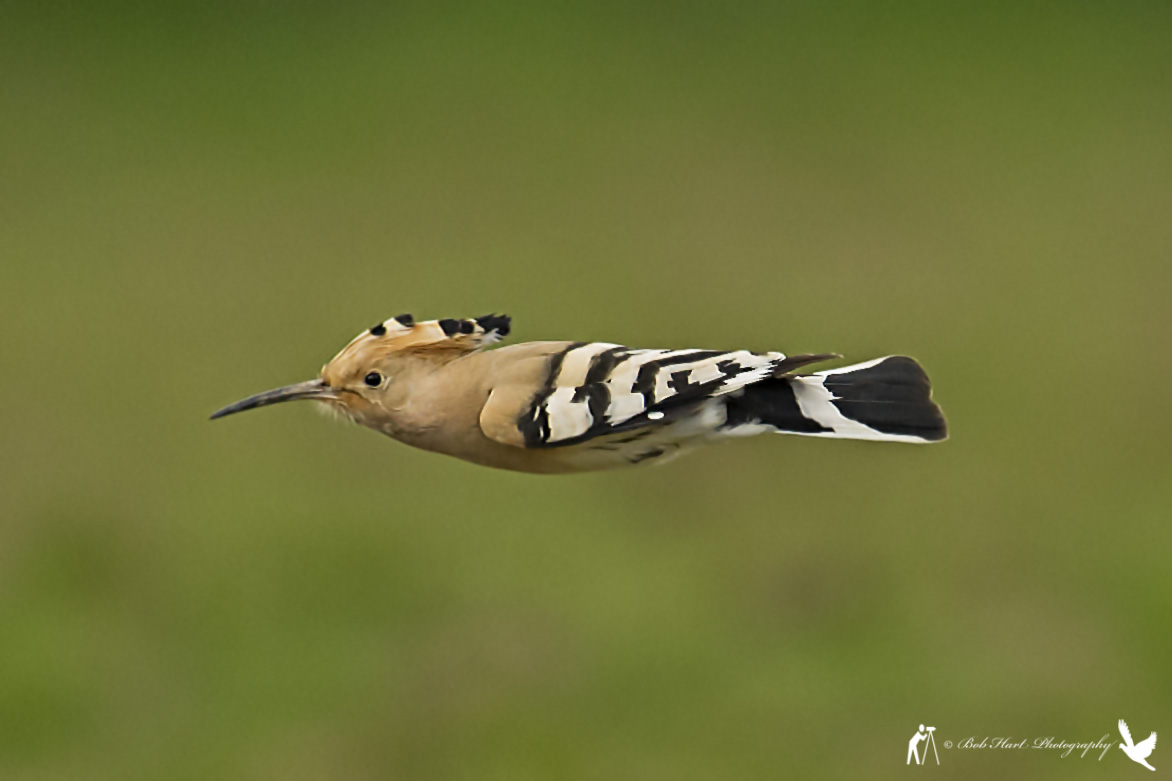 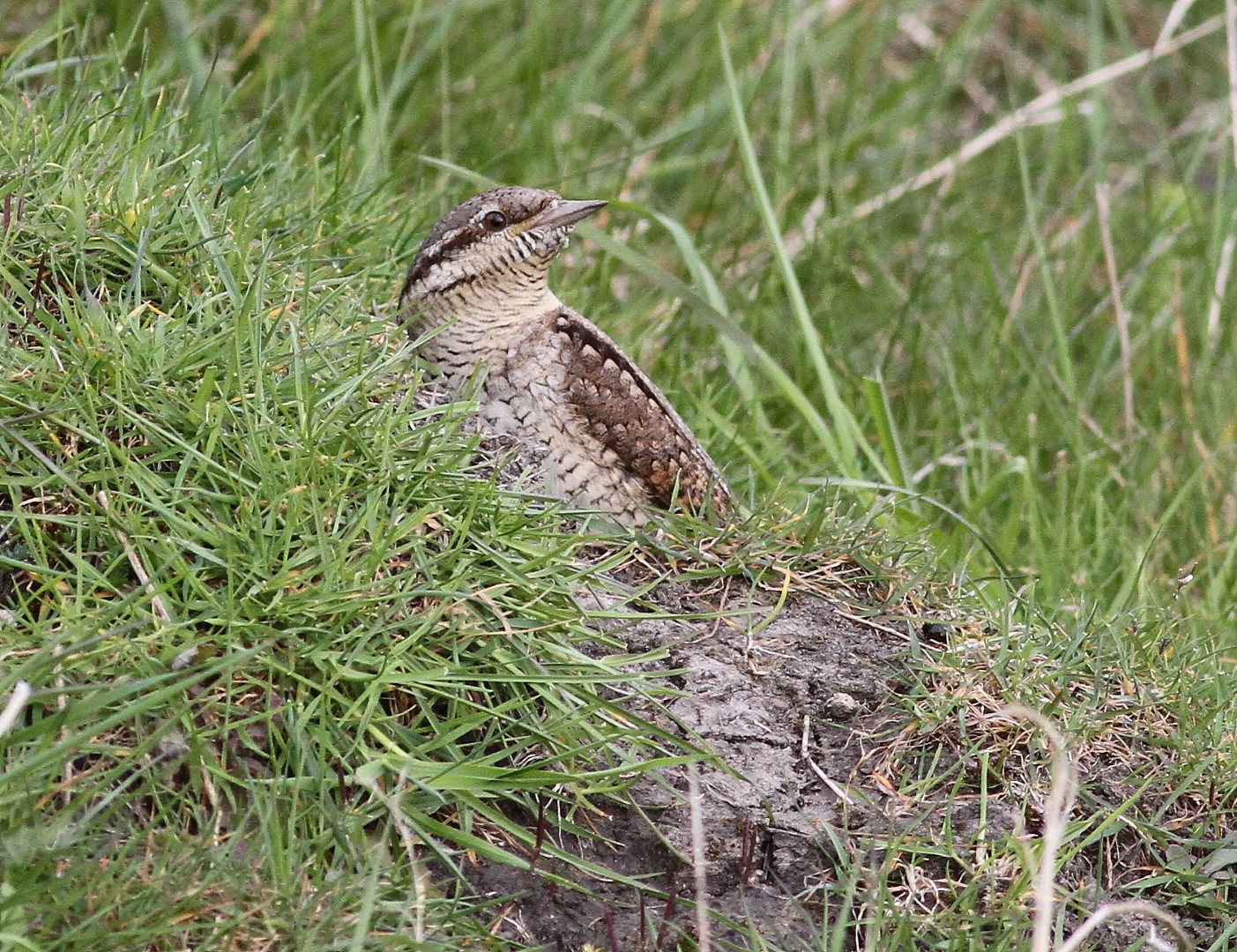 The Pallas's Warbler was again noted at Portesham, Dorset, on 27–28th but not subsequently. A single Richard's Pipit remained at Flamborough Head, E Yorks, to 28th and one was on the cliff-top at Beeston Bump, Norfolk, on 3rd. Fly-over European Serins were seen at sites in Kent on 29th and 30th and in Dorset on 1st. The first European Bee-eater of 2016 was over Portland, Dorset, on 30th before flying out to sea.

Cyprus's first Amur Falcon was an exciting discovery at Anarita Park, near Paphos, on 28th and was still there on 1st. Arguably more significant in a Western Palearctic context, though, were two adult Red-footed Boobies together on Raso, Cape Verde, on 29th — the first documented multiple occurrence in the region. A Mourning Dove at the Llobregat Delta, Spain, from 1st was an amazing find. 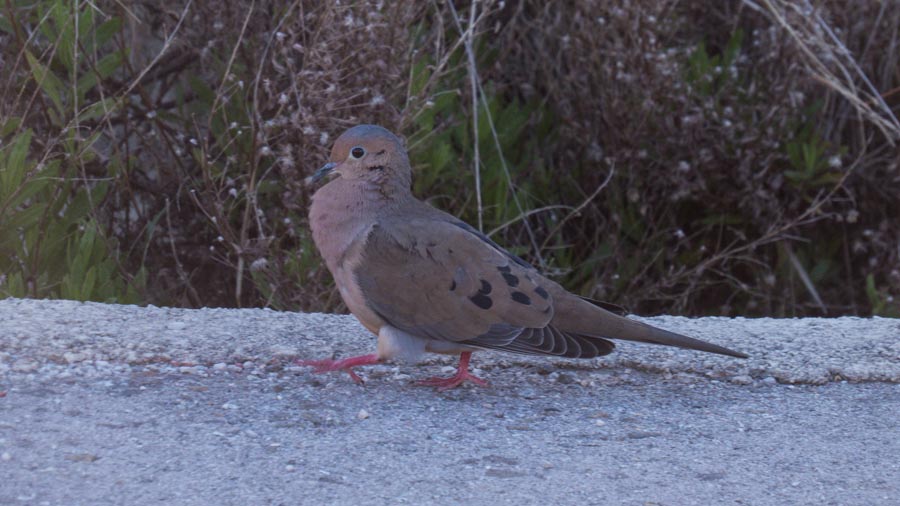 Following a male Greater Sand Plover on Öland, Sweden, on 27th, what could well be the same bird was then at Præstø, Denmark, on 30th. The Forster's Tern reappeared on Texel, Netherlands, on 1st, while a Black-headed Wagtail there from 30th is potentially (and perhaps surprisingly) a national first. The Moustached Warbler was also still singing near Nijmegen on 30th, while back on Öland, Sweden, a dark-morph Eleonora's Falcon was photographed on 2nd.

Other records included Armenia's first Black-winged Kite at Armash on 2nd, at least three Oriental Honey Buzzards migrating over Eilat, Israel, during the week and an Alpine Accentor at Greifswalder Oie, Germany, for its second day on 27th.