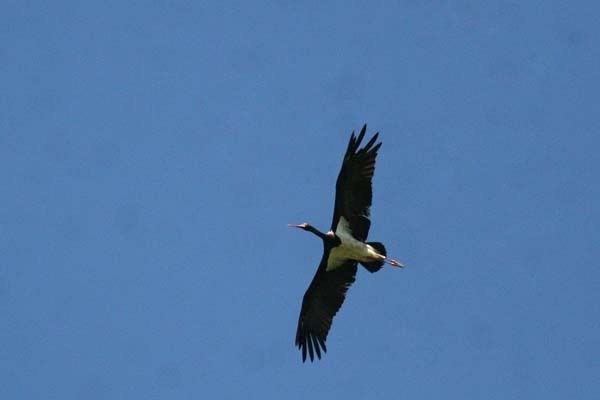 Easily the rarest bird seen during the week was a Madeiran Storm-petrel that crossed paths at close range on two occasions with the Scilly pelagic on the 28th. With just two previously accepted records for Britain and Ireland (Hampshire in 1911 and Co. Mayo in 1931), this represents a prize find for seabird enthusiasts and just reward for the pelagic stalwarts on the Isles of Scilly. This sighting, assuming acceptance, would also have implications for the species' status on the British list, where it would be upgraded from category B to A. The Scilly pelagics are building up an enviable list of species and no doubt this is not the last of a mouthwatering array with which to tease land-based observers. In the Northeast Atlantic, Madeiran Storm-petrel breeds off Portugal, Madeira, Cape Verde Islands and the Azores (where two distinct populations occur). It is an extremely rare vagrant to western Europe away from Portugal and the Canary Islands with 'wrecked' singletons found during winter in Finland and Switzerland, three records from France and handful from Spain. Its apparent reluctance to move northwards from these breeding areas could well ensure that records in coming years will remain few and far between.

One of the other talking points of the week relates to the Chimney Swift reported in York (N. Yorkshire) last week. After careful study of the available photographs it has become evident that the bird was most likely an aberrant Common Swift. The bird appears to be missing primaries, plus tail, hence creating a completely different 'jizz' in the field. This is one of those occasions where it appears that photographic evidence can be used to argue against the identity of a bird despite many observers seeing the bird and leaving happy about the identity. Unfortunately swifts rarely give such prolonged views as other bird families, so scrutiny of photographs is often the best way to dissect their identification - many will no doubt wish that the York bird had eluded such documentation! 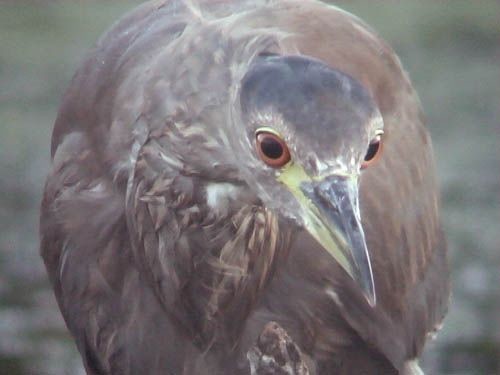 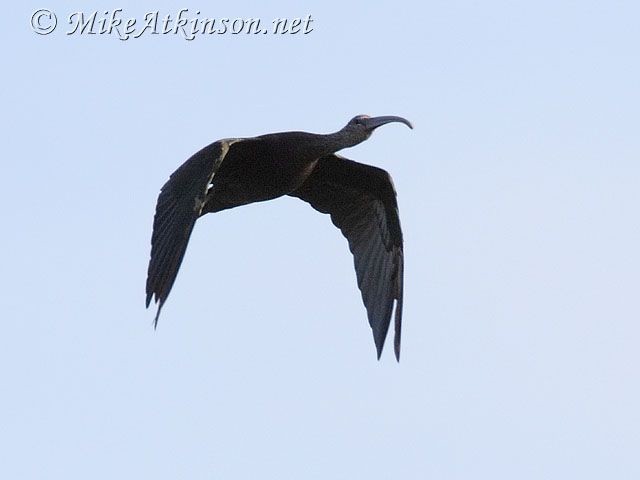 A Black Stork passed over Berrington Pool (Shropshire) on 29th and was presumably the individual that was located on the Alaw Estuary (Anglesey) from 31st onwards. Often a difficult species to catch up with, most are typically brief and mobile, but an obliging bird present for several days will have been well received by those who have travelled to see it. A Cattle Egret was at North Warren (Suffolk) between 26th and 30th, and one was at Dungeness (Kent) on 30th, there were Great White Egrets at Middlebere (Dorset) and Ravenglass (Cumbria) and the Night Herons were at Fairburn Ings (W. Yorks) to the 28th. The Glossy Ibis remained at Marshside (Lancs) and a party of four was reported over Southport (Lancs) on 31st.

There was precious little seawatching to be had. Wilson's Storm-petrels were seen from the Scilly pelagics on 27th, 29th and 31st and Leach's Storm-petrels were off Cumbria on 27th and 28th, with others in Aberdeenshire and Orkney. Fifteen Great Shearwaters passed Cape Clear (Co. Cork) on 26th and singles were observed from the Scilly pelagic on 27th and 28th, though the maximum count of Cory's Shearwaters was just four passing Galley Head (Co. Cork) on 26th. The majority of Balearic Shearwater records were from the southwest, with 41 passing Porthgwarra (Cornwall) on 19th. There were Long-tailed Skuas reported from Lincolnshire and Northumberland and two Sabine's Gulls were noted from the Scilly pelagic on 27th. 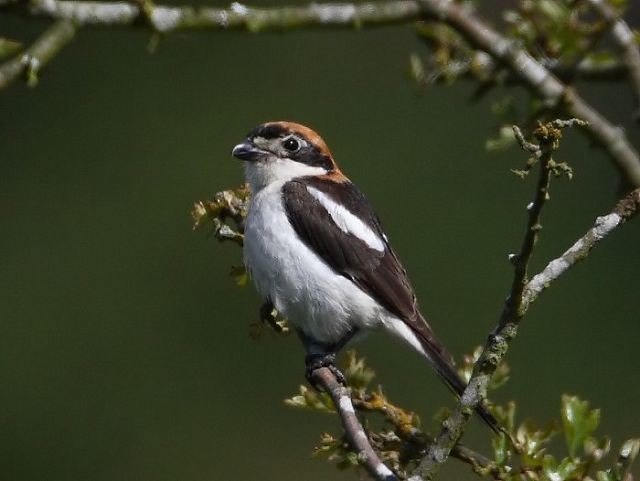 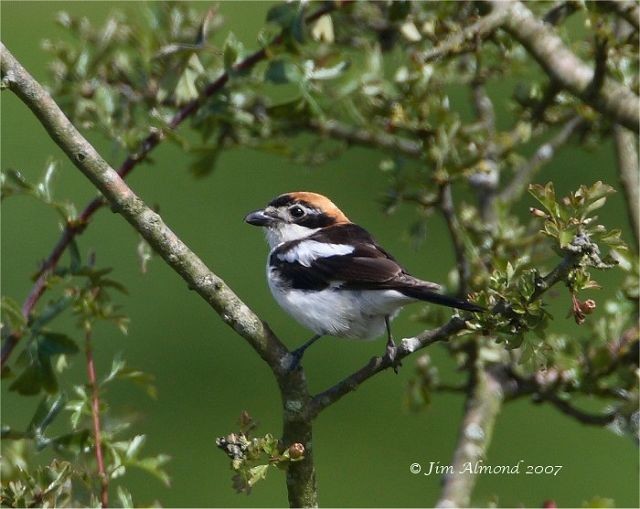 A Roller was an elusive visitor to Usk Reservoir (Powys/Carmarthen) between 29th and 31st, a Woodchat Shrike was at Catherton Common (Shropshire) from 28th to 29th and the Lesser Grey Shrike remained on Fair Isle (Shetland). An adult Rose-coloured Starling was present in the Land's End (Cornwall) area and Dorset accommodated an Alpine Swift at Portland on 28th and Lodmoor on 29th, with the county also weighing in with a Wryneck at Bridport on 26th and Serin over Winspit Valley on 29th. 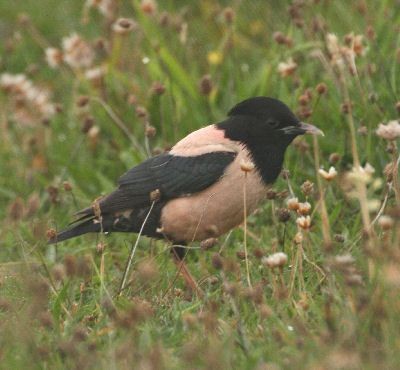 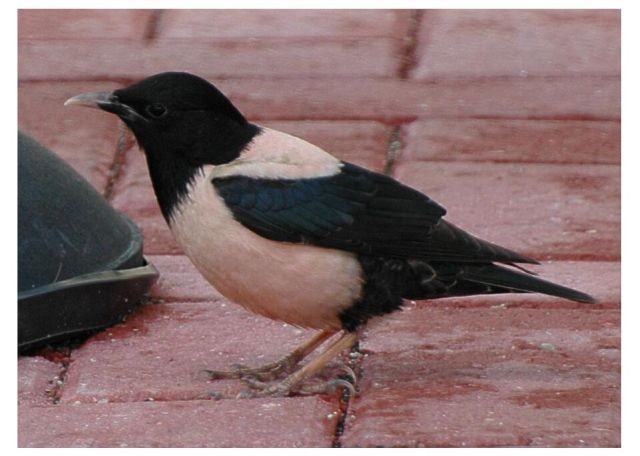 On the wader front, several White-rumped Sandpipers included birds still at Crosby (Lancashire) on 26th, Anthorn (Cumbria) on 29th, Ythan Estuary (Aberdeenshire) on 29th and 31st and Thorganby Ings (N. Yorks) on 31st. Buff-breasted Sandpipers were present on North Ronaldsay (Orkney) and at Patrington Haven (E. Yorks), with the latter presumably responsible for sightings in Lincolnshire at Far Ings on 30th and Read's Island on 31st. A Long-billed Dowitcher was at Shannon (Co. Clare) on 28th and the Hudsonian Whimbrel remained at Walney Island (Cumbria) through the week, as did the Lesser Yellowlegs at Leighton Moss (Lancashire), which also visited Jenny Brown's Point on 26th. The only Pectoral Sandpiper of the period was at Thorganby Ings (N. Yorks) and a Red-necked Phalarope was at Nosterfield (N. Yorks) on 28th. 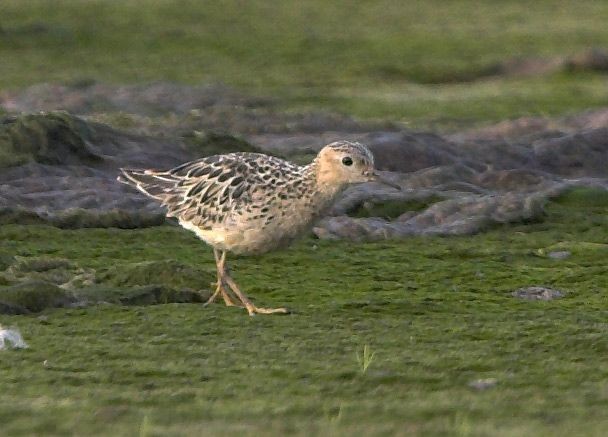 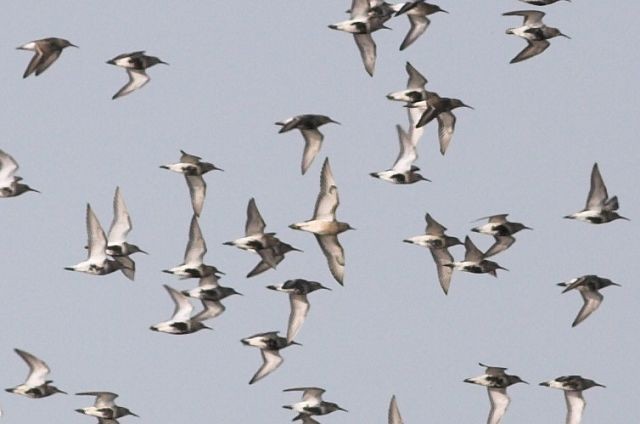 A 1st-summer male Red-footed Falcon was on the Isle of Wight from 28th-29th, with a possible over Titchfield Haven (Hants) on 29th. The Black Kite at Nocton Heath (Lincs) continued to show throughout the week and another was reported from Hauxley (Northumberland) on the 1st. A Snowy Owl was again on Lewis (Outer Hebrides) and the Montagu's Harriers continued to perform well at Digby Fen (Lincolnshire). A Gull-billed Tern passed Eccles on Sea (Norfolk) on 30th and the Bonaparte's Gull continued on South Uist (Outer Hebrides). A possible Redhead was reported from Kenfig Pool (Glamorgan) on 1st, Ring-necked Ducks remained in Fife and Somerset, the Ferruginous Duck was again at New Hythe (Kent) and at least three Surf Scoters remained off Aberdeenshire. 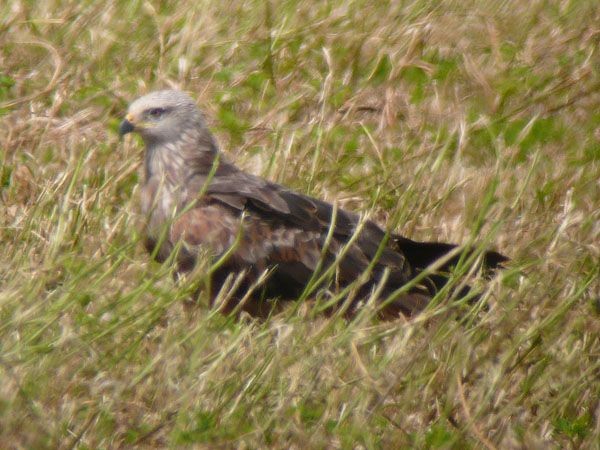 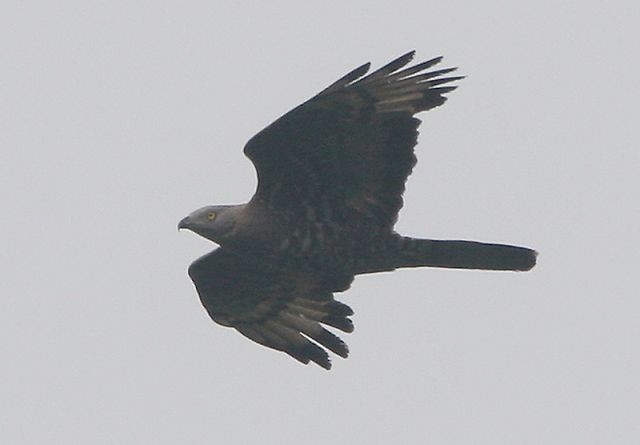 This week's eye-catching image is a Bee-eater taken by Paolo Caretta. Paolo's frame-filling flight shot of a Bee-eater captures the beauty of one of Europe's most colourful birds. The shot is sharp enough to show wing detail on the bird's prey as well as the bird itself. Photographically, this is a good example of front lighting, which brings out colours and avoids loss of detail in shadows and highlights. It also creates a 'catch-light' in the eye, which gives life to the subject. 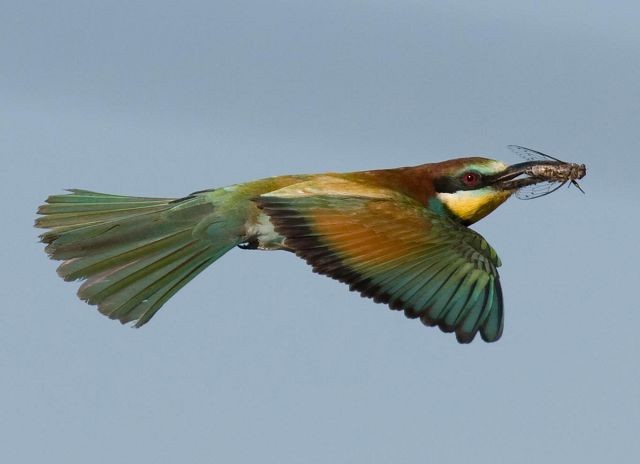 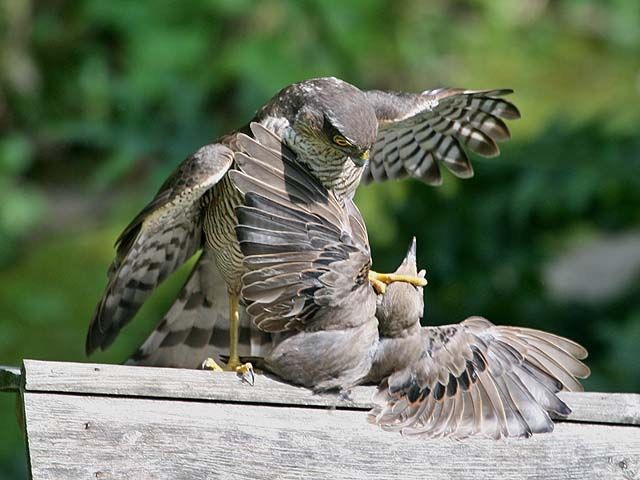 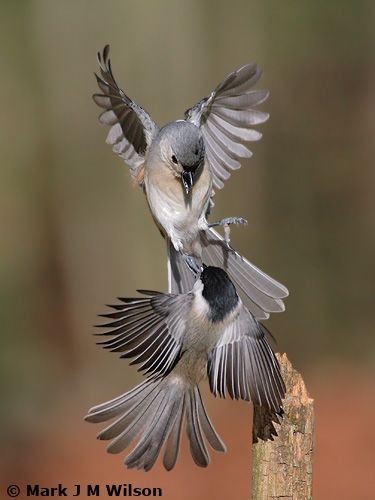 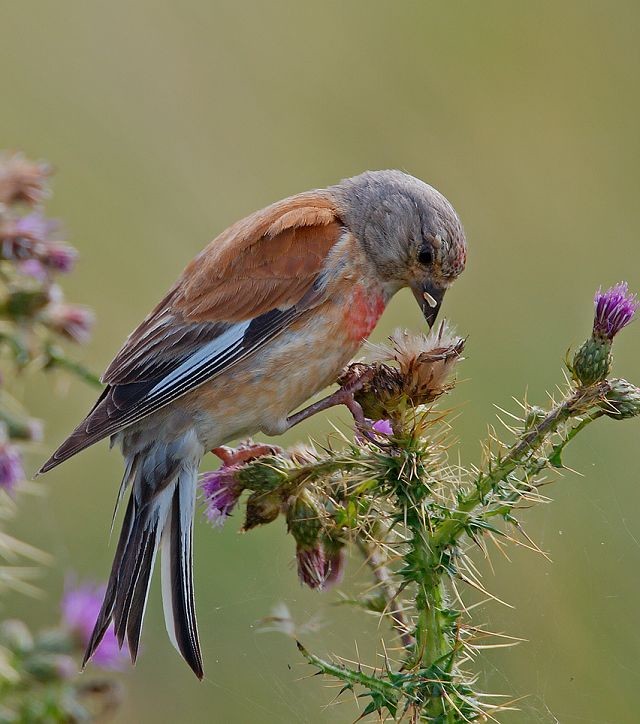 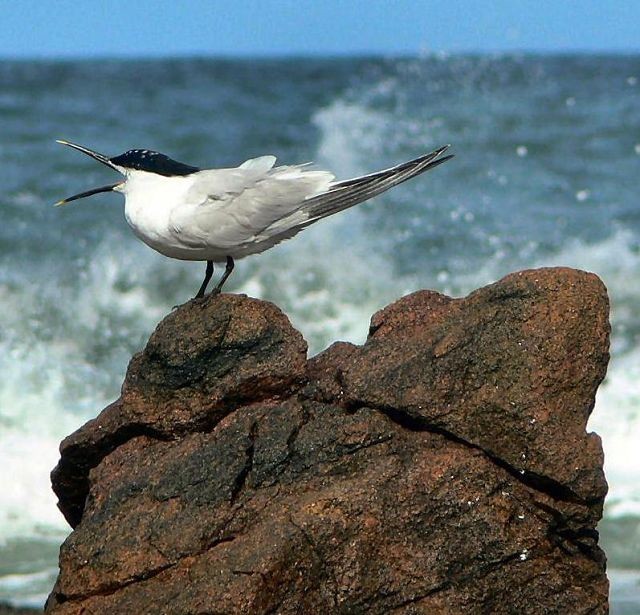 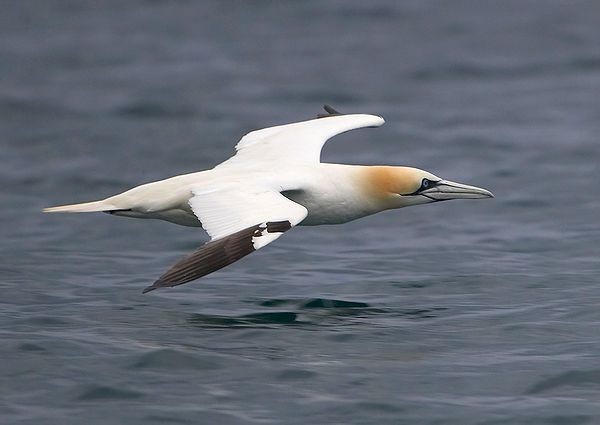 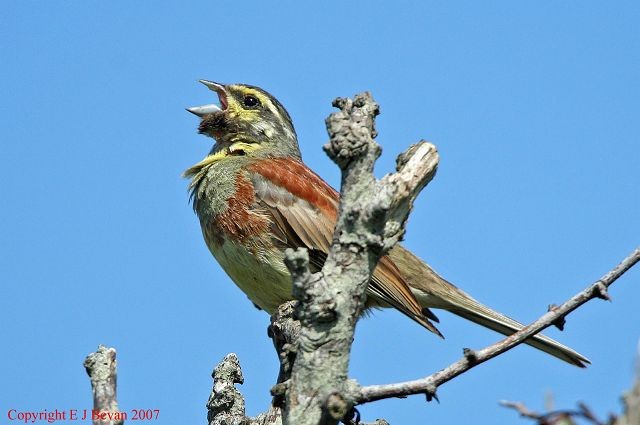