Spring still appears to progressing at a sedate pace and this week was little different to recent ones. A male Wilson's Phalarope at Hillesden (Bucks) from 27th-30th was an excellent inland find and was the 1st county record. A Spotted Sandpiper was at Newlyn (Cornwall) from 25th-28th and a Buff-breasted Sandpiper at Lough Beg (L'derry) on 27th. The pair of Black-winged Stilts continued their parents-in-waiting duties at Martin Mere (Lancs), whilst four Pectoral Sandpipers were reported: at Cocklawburn (Northumbs); Inner Marsh Farm (Cheshire); Dungeness (Kent) and Loch of Hillwell (Shetland). The only Temminck's Stint still at large was the long-staying bird at Saltfleet (Lincs) and one-day Red-necked Phalaropes were seen at Marshside (Lancs) and Gouthwaite Reservoir (N. Yorks) on 29th and North Galson (Outer Hebrides) on 30th.

A Bulwer's Petrel was reported passing Selsey Bill (W. Sussex) on 30th, but presumably a well-watched, and well-documented, bird will be required for this species to regain its place on the British list (from which it was recently removed) - one for pelagic watchers from Scilly? The Black-browed Albatross remained atop Sula Sgeir (Outer Hebrides). Once again it was another productive week for seawatchers, though the majority of the action was off the Outer Hebrides for skua watchers. A total of 105 Pomarine Skuas passed Balranald (Outer Hebrides) on 26th, though numbers were unexceptional otherwise. Likewise, Long-tailed Skua numbers were modest; peak counts were 54 off Corsewall Point (Dumfries and Galloway) on 27th and 46 passing Balranald on 28th. A handful of rare spring records were seen along Northeast England and one went through Unstead SF (Surrey) on 28th. European Storm-petrels were still conspicuous in the English Channel, counts including 369 past Hope's Nose (Devon) on 26th and 185 passing Hengistbury Head (Dorset) on 27th. Small numbers of Balearic Shearwaters were noted, including 5 past Portland Bill (Dorset) on 29th and Sooty Shearwaters passed Whitburn (Durham) and Leasowe (Cheshire). A White-billed Diver was seen passing Butt of Lewis (Outer Hebrides) on 28th.

Rare terns included a Gull-billed Tern at Dungeness (Kent) on 25th, Whiskered Tern at Rockland Broad (Norfolk) from 25th -26th and the White-winged Black Tern remained at Barton-upon-Humber Pits (Lincs) to 25th, before relocating to Broomhill Flash (S. Yorks) from 26th-27th. A 1st-summer Laughing Gull was at Bunbeg (Co. Donegal) on 28th, with this species or a Franklin's Gull reported at Belgooly (Co. Cork) on 31st. A 1st-summer Bonaparte's Gull was at Blennerville (Co. Kerry) from 28th, a Sabine's Gull passed Little Orme (Conwy) on 28th and Ring-billed Gulls were in Co. Galway. A possible Heuglin's Gull at Dungeness unfortunately proved not to be, though in due course it is likely that one will show the requisite characteristics of this tricky gull. 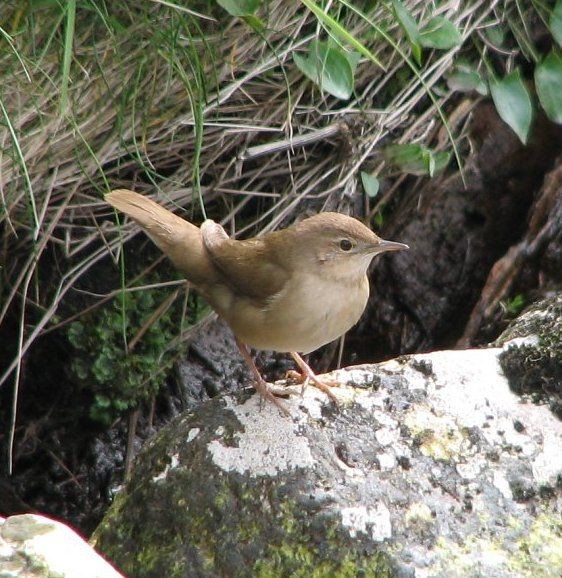 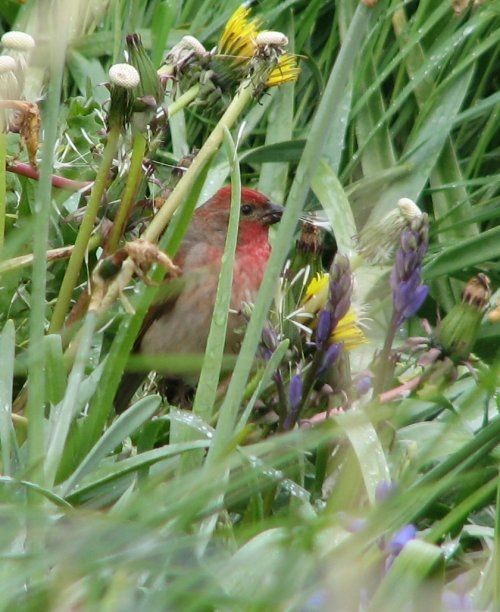 Passerine interest was disappointing considering the date, but a Savi's Warbler on Unst (Shetland) from 28th was only the 9th Scottish record. A Great Reed Warbler was at Spurn (E. Yorks) on 27th and the Subalpine Warbler was still on Ramsey Island (Pembrokeshire) to 27th with another at Pagham Harbour (W. Sussex) on 25th. Scarce warblers were indeed scarce! A Marsh Warbler was trapped at Portland Bill on 31st, a Melodious Warbler was at Sker Point (Glamorgan) on 29th and two Icterine Warblers were in Kent, at Dungeness on 25th and Bockhill Farm on 29th. A Red-throated Pipit was on Foula (Shetland) on 26th and a Grey-headed Wagtail at Flamborough Head (E. Yorks). Five Red-backed Shrikes, including a male at Catcott Lows (Somerset), only just outnumbered the three Woodchat Shrikes seen at Portland Bill and Hengistbury Head (Dorset) and Bryher (Scilly). A splash of the exotic was provided by a Bee-eater at Dungeness (Kent) from 30th-31st and another at Fanad Head (Co. Donegal) on 28th, plus 8 migrant Golden Orioles, along with Hoopoes at Winteron (Norfolk) and Portland. Serins included singles at Spurn, Selsey Bill and Portland. Red-rumped Swallows were at Maenporth (Cornwall) and Dungeness, a Short-toed Lark was on Fair Isle and a Tawny Pipit on Bryher (Scilly) on 31st. Six Common Rosefinches were well distributed, three Bluethroats were on Shetland and an Ortolan Bunting still on Fair Isle. The Iberian Chiffchaff was still at Postbridge (Devon) on 28th. Also from the famous island of Fair Isle came news of the 4th breeding record for Shetland of the familiar Robin. A reminder that rare birds in most cases are simply common birds in the wrong place! 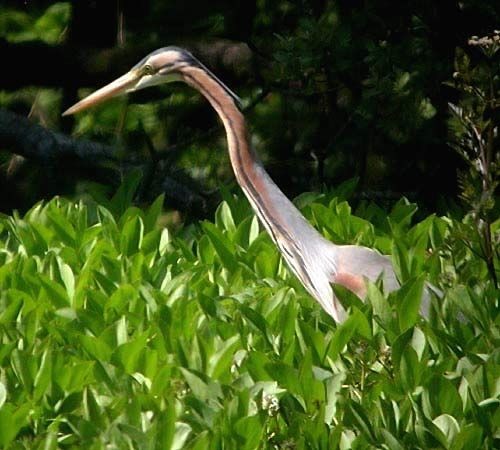 
There was a belated report of a Squacco Heron visiting a garden pond in Kilkhampton (Cornwall) to 25th, Night Herons were at Tacumshin (Co. Wexford) from 28th and another over Port Erin (Isle of Man) the same day and 5 Purple Herons included two still at College Reservoir (Cornwall). A Black Stork was over Tonbridge (Kent) on 28th and White Storks of unknown origin were in Yorkshire, Norfolk and the Midlands. 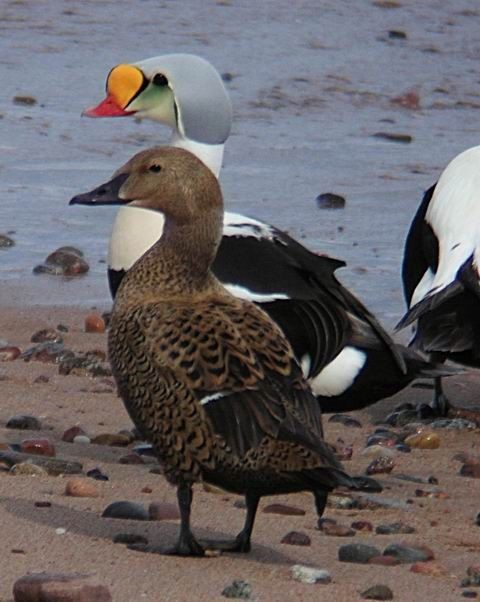 
A pair of King Eiders at Blackdog (Aberdeenshire) will have provided a fine sight, and others were in Ayrshire and Shetland. The drake Blue-winged Teal remained at Castle Espie (Co. Down), a possible American Wigeon was at Cardiff (Glamorgan) and a Green-winged Teal in Aberdeenshire. Drake Ring-necked Ducks were at Willington GPs (Beds) and North Duffield Carrs (N. Yorks) and a Surf Scoter was off Lothian. A Black Kite passed over Buckfastleigh (Devon) on 31st. 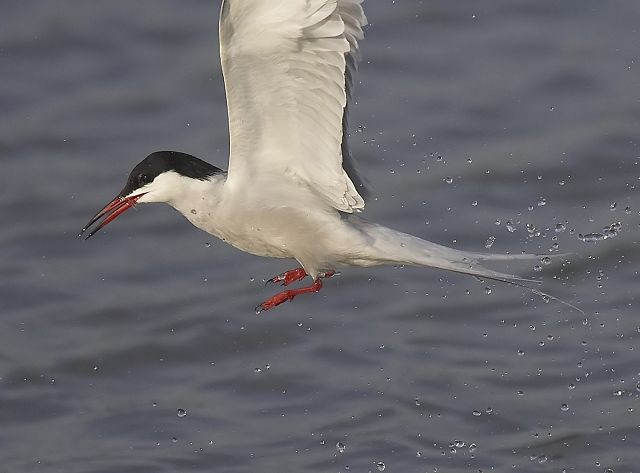 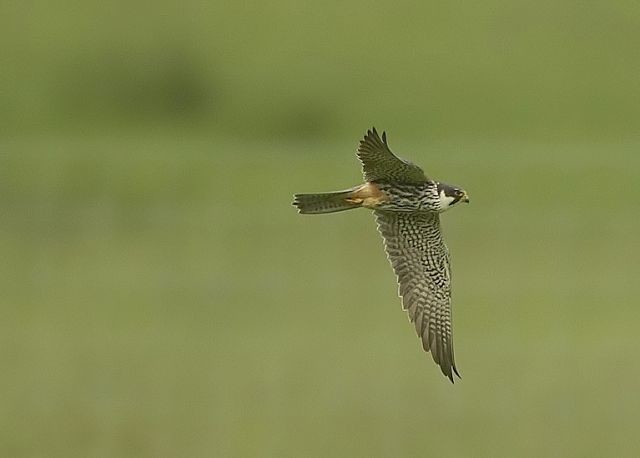 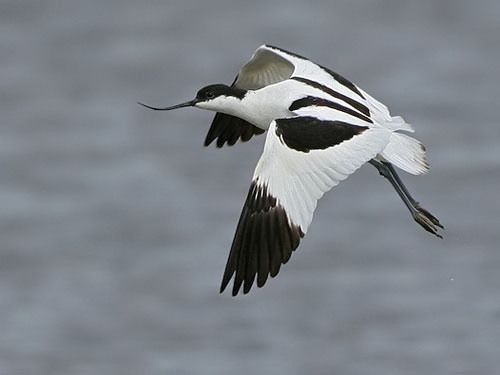 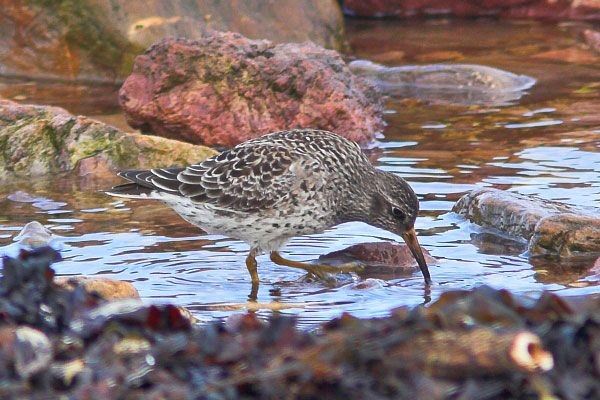 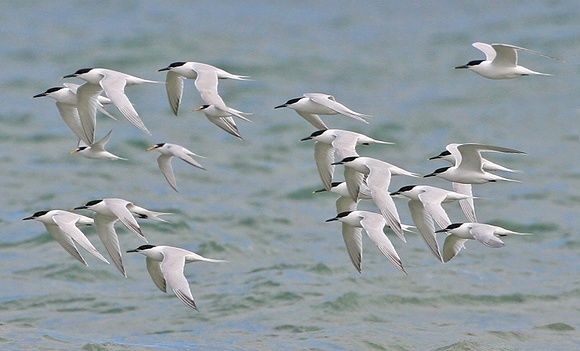 Sandwich and Little Terns: Point of Ayre, Isle of Man (photo: Sean Gray).
Many of the images that appear in our weekly reviews can be purchased from the photographers, some of whom have their own websites: