Although temperatures returned closer to the seasonal average this week, the hot spell for waders intensified – several quality finds were made in both Britain and Ireland, with rarities from both east and west.

Pick of the bunch was a fine adult Greater Yellowlegs at the unsuspecting location of a country house in landlocked Co Kildare. Carton House sits on the outskirts of Maynooth, perhaps 15 km or so inland of Dublin city centre, and is not known for its track record of producing Nearctic vagrants. In fact, it's probably not had all that many of the regular waders over the years, let alone extreme rarities from North America. Yet, on 29th, sensational news broke from the site's 'lake' (in fact a widening of the River Rye, which runs through the estate), of the yellowlegs. Even more sensationally, the bird went on to linger for a couple of days, giving brilliant views to a small crowd of appreciative if slightly bemused birders until it barrelled off high into the sky and away south-east during the afternoon of 31st. Will Co Kildare ever produce another Greater Yellowlegs anywhere, let alone in such an innocuous location? Unlikely! Incidentally, the Greater's appearance was well timed after the contentious Hampshire Lesser Yellowlegs (which was still there this week) and it's a fine bird to appreciate the altogether rangier structure, the longer bill and relatively smaller head, as well as the intensely marked underparts (including on the belly and vent). Meanwhile, a new Lesser Yellowlegs made it to Tresco, Scilly, on 31st and the Norfolk bird remained at Titchwell RSPB. 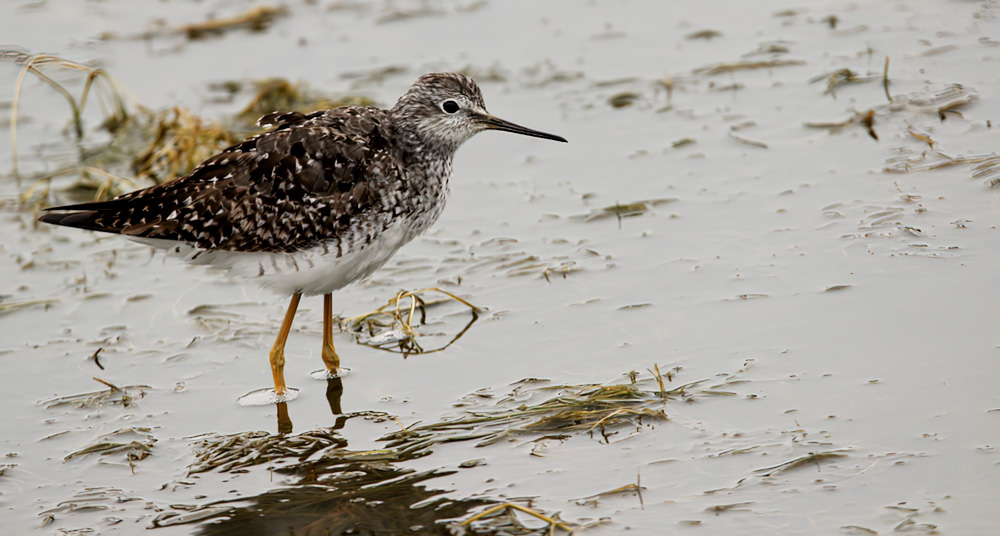 Drift Reservoir in westernmost Cornwall has a long track record of producing rare waders, and an adult Least Sandpiper there from 27th was the latest addition to the site's shorebird list. With fewer than 50 previous British records, Least Sand is one of those surprisingly rare birds that feels like it should be more regular than it actually is – anyone that has birded in eastern North America or the Neotropics will know how ubiquitous this species can be, and it is quite regular in the Azores. August seems to be the peak month for arrivals of adults, so this one was slightly on the early side and is the first in the county since a juvenile at Hayle Estuary in autumn 2006.

A brief Terek Sandpiper at Loch of Strathbeg RSPB, Aberdeenshire, on 31st was an excellent record for North-East Scotland and is the first noted anywhere in Britain this year. It's the second for Strathbeg after one in May 1997 and just the third county record. In Lincolnshire, the Stilt Sandpiper remained at Alkborough Flats throughout the week, but patience is often required to see it well. The run of White-rumped Sandpipers continued, with two in the Pagham Harbour area of West Sussex on 26th. Then, on 31st, birds were found at East Chevington, Northumberland, and Inny Strand, Co Kerry. Nine Pectoral Sandpipers was a decent showing for late July, with three in Ireland and six in Britain, the latter including new birds in Dorset, Kent and Lincolnshire. Temminck's Stints were at Sandwich Bay, Kent, and Conder Green, Lancs, on 29th, the latter lingering to 31st. The family of Black-winged Stilts was last noted at Potteric Carr YWT on 29th, while a Eurasian Stone-curlew at nearby Hatfield Moors was one of a few extralimital birds noted this week. Rare terns also featured prominently in the news this week, with a Whiskered Tern at Fishlake Meadows, Hampshire, on 31st being the first of its kind recorded in Britain this year. After an eight-day absence, the Gull-billed Tern reappeared at Oare Marshes NR, Kent, on 28th, before being seen off Graveney Marshes on 30th and then on Sheppey on 31st. A Caspian Tern off Anderby, Lincolnshire, early on 26th was perhaps that lingering on the Humber off Paull, East Yorkshire, later in the day. Prior to these, Norfolk's adult was back at Potter Heigham Marshes on 25th. Across the Irish Sea, the Least Tern was noted at Portrane, Co Dublin, on 25th and 30th and the Elegant Tern was at Inishroo, Co Galway, on 26th. Two adult Bonaparte's Gulls were discovered this week. The first was in Cork Harbour at Harper's Island from 27-29th at least, with a breeding-plumage bird on Mull at Loch Spelve on 29th, in addition to the usual bird still at Oare Marshes. The adult Ring-billed Gull was noted again at Loch Turret Reservoir, Perth & Kinross, while what is presumably the same adult Laughing Gull last seen on Scilly on 10 July reappeared on Tresco on 27th. Caspian Gulls were at 25 sites north to Northumberland, notably including the Polish-ringed bird back at Amble Harbour for the ninth summer running and a couple of Dutch-ringed juveniles on the beach at Cromer, Norfolk. 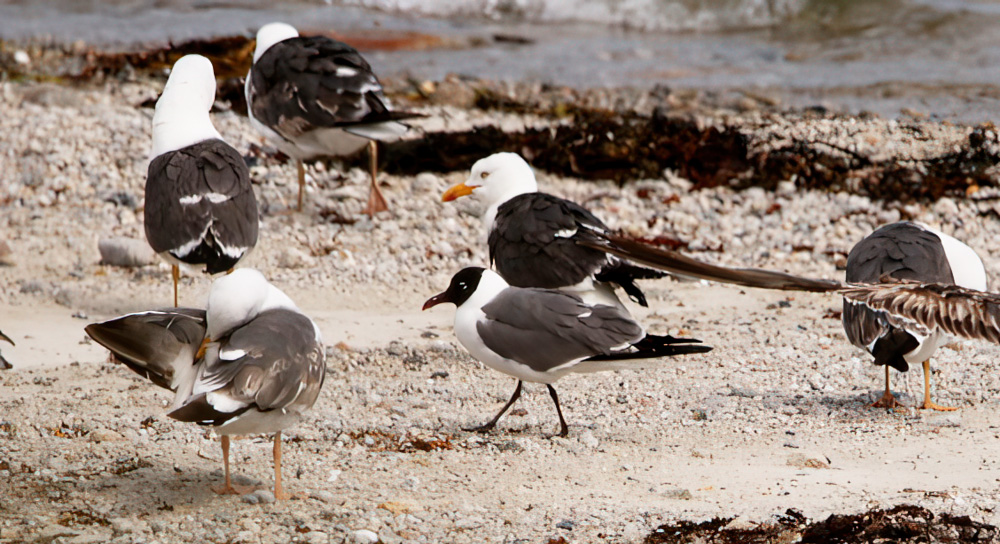 There has been a reasonable smattering of rare and scarce herons across Britain and Ireland for much of the summer, and this week's star arrival was a fine Squacco Heron at Pagham Harbour, West Sussex, on 29th. Lingering until the week's end, the bird occasionally gave brilliant views and is the third seen in Britain since mid-May (with a fourth seen in Ireland). Up to two juvenile Purple Herons were in Kent's Stour Valley, with two more reported at Catcott Lows NR, Somerset, on 30th. Further birds were at Rye Harbour, East Sussex, Carsington Water, Derbyshire, and Denaby Ings, South Yorkshire, all on 28th, and Lakenheath Fen RSPB, Suffolk, on 31st. Meanwhile, the unringed White Stork reappeared at Eldernell, Cambridgeshire, on 27th, and Black-crowned Night Herons stuck around at Oare Marshes, Kent, and Cley Marshes, Norfolk. Seabirding appears to be picking up again, just in time for peak season. Up to six Wilson's Storm Petrels were noted in Scilly waters this week, with records from pelagics on four dates. Other notable tallies included 30 Cory's and 27 Great Shearwaters there on 30th. A pelagic off Cape Clear, Co Cork, produced an impressive nine Wilson's on 30th, although just a single Great Shear. Land-based sightings of Wilson's came from Pendeen, Cornwall, on 25th and 30th, while 128 Cory's passed Porthgwarra on 31st.

A single Cory's passed Skokholm, Pembrokeshire, on 25th, with significant North Walian observations from Great Orme, Conwy, on 25th and Cemlyn, Anglesey, on 29th. At least 18 English east coast sites between Lincolnshire and Northumberland also registering that species, with a top count of an exceptional (for the North Sea) four past Flamborough Head, East Yorkshire, on 26th. This North Sea influx culminated in a twitchable bird occasionally showing as close as just beyond the breakers between Pettycur and Kinghorn, Fife, for five days from 26th. There are puzzling goings on at Draycote Water, Warwickshire, at the moment. Last week's juvenile Ferruginous Duck seemed to suddenly gain a pale bluish-grey eye, as on 25th, a duck with a sufficiently different appearance popped up in the same spot. It didn't take long to confirm that there were definitely two different birds, with each photographed side by side.

Coincidences happen frequently in birding and it pays to keep an open mind when it comes to birds' abilities in terms of migration and vagrancy. But this is now three juvenile male Ferruginous Duck at Draycote in the space of a year, and all at unusually early dates in the summer months. It's all beginning to feel a little uncomfortable. Is there a shady character at large in the West Midlands, car boot full of young Ferruginous Duck, occasionally stealing down to Draycote in the hours of darkness and releasing them?! I jest, of course, but the point remains – is this second arrival a coincidence too far? Many would say so. Incidentally, what is presumably one of these birds hopped over the Northamptonshire border to Daventry Reservoir on 31st. Wildfowl was otherwise scantily represented on the news – no surprise for late July – and the return of the drake Black Scoter to the seas off Blackdog, Aberdeenshire, on 31st was the most significant development in this department. Meanwhile, the American Black Duck was reported again from Cross Lough, Co Mayo, for the first time in five weeks, with the American Wigeon also still at Lough Beg, Co Antrim. Anglesey's Ring-necked Duck prolonged its stay at Llyn Penrhyn for another seven days (as did the Pied-billed Grebe at Loch Feorlin, Argyll). In excess of 50 sites held Garganey, with a noticeable influx of juveniles across England this week. Common Scoter passage was also evident in the rain across northern England, with the group of 200 or so seen flying over Nosterfield Quarry, North Yorkshire, on the morning of 29th must have made for a spectacular sight. Some 28 at Carsington Water early on 31st were notable, too. A moulting male King Eider was at Basta Voe, Yell, Shetland, on 27th.

Notable landbirds too were in short supply, but a male Black-headed Wagtail trapped and ringed at Nanjizal, Cornwall, on 26th was a surprise. In London, the Iberian Chiffchaff was again noted a couple of times at Regent's Park. An early Wryneck was ringed at Slapton Ley, Devon, on 30th, with a handful of Pied Flycatchers starting to move further signalling the impending autumn season. Up to seven adult European Bee-eaters continued to feed chicks at Trimingham, Norfolk, while a Rosy Starling was in a private Brighton garden on 25th.

The watchpoint at Swanton Novers, Norfolk, was still a reliable bet for sightings of up to four European Honey Buzzards, while another flew in off the sea at Bempton Cliffs, East Yorkshire, on 25th – without wanting to sound too blasé about the site's two lingering megas, it's worth mentioning at this point that both the Red-tailed Shrike and Black-browed Albatross were still around all week. A ringtail Montagu's Harrier flew over Titchwell RSPB, Norfolk, on 28th.

Finally, there was a good selection of significant insect news this week, not least a Scarlet Darter dragonfly at Minsmere RSPB, Suffolk, on 28th – there are only about a dozen previous British records. Migrant lepidoptera included Queen of Spain Fritillaries at two sites in Kent, including two near Barham on 30th. The first Red-necked Stint for the Azores and Portugal was found at the famous Cabo da Praia quarry on Terceira on 26th, representing yet another stunning Asian vagrant for this most sensational of vagrant honeypots. Also there were three each of Least Sandpiper and Semipalmated Plover.

In France, the Bridled Tern continued at Île aux Moutons, Finistère, on 31st, while up to two Elegant Terns were regularly reported from Bouches-du-Rhône and the White-rumped Swift remained near Minerve.