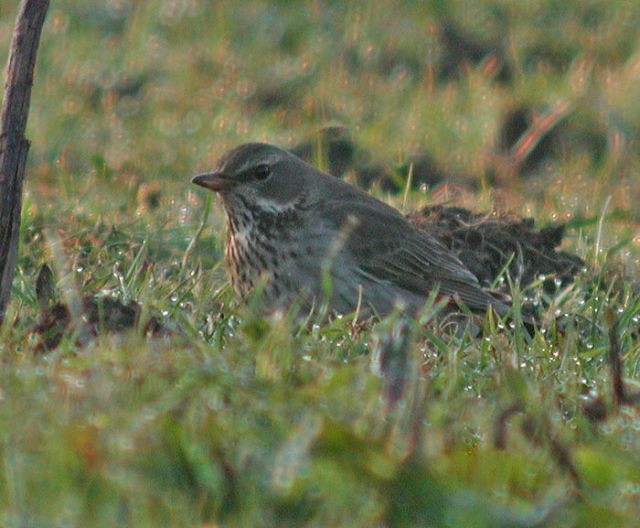 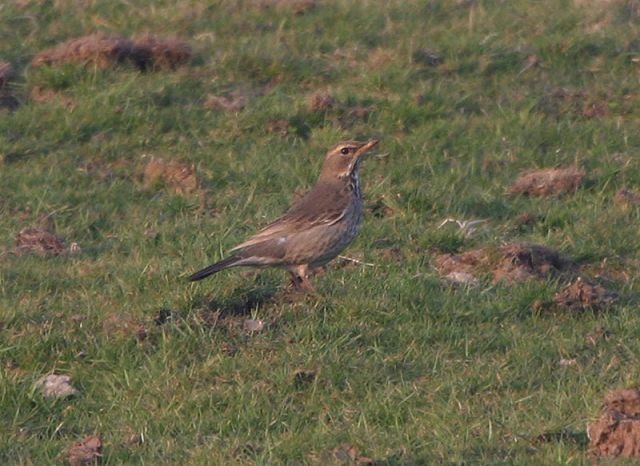 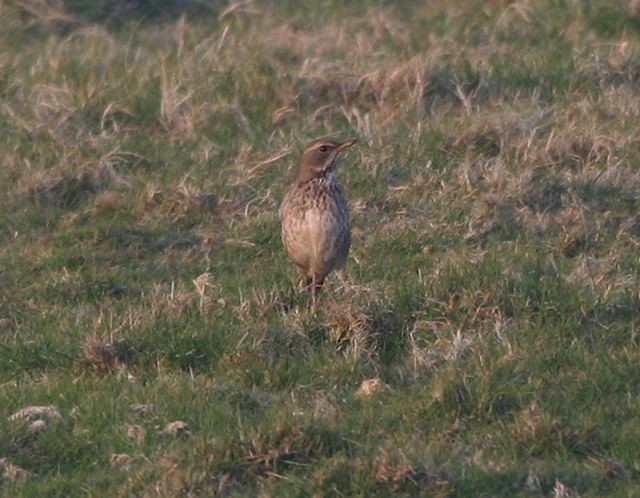 A female Black-throated Thrush at Buckton (E. Yorks) from 25th-27th was the best 'find' of the week. Although there have been a number of well watched, and obliging, males in recent years, long-staying females on the mainland are something of a 'mega'. Therefore, this individual gave many observers the opportunity to acquaint themselves with a bird in less obvious plumage for a change. Although this was the 5th Yorkshire record, it was the first in the county to be laid on for the masses, thus proving popular on a local level as well a national one. The male Black-throated Thrush also remained at Rothesay (Bute). 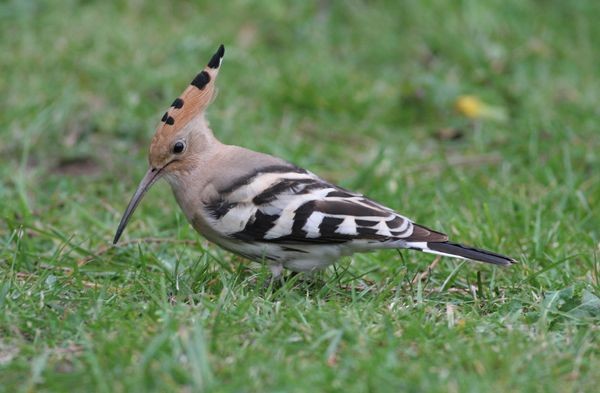 
A Little Bunting was at Marazion (Cornwall) on the 26th and the male remained at Amwell GPs (Herts), as did the Penduline Tit at Rainham Marshes (London). The Hoopoe was at Knighton (Somerset) to the 27th, and the Dusky Warbler continued to perform in Newquay (Cornwall). Four Yellow-browed Warblers included two in Cornwall and five Siberian Chiffchaffs included a bird in Cork (Co. Cork). A Great Spotted Cuckoo was reported on St. Martin's (Scilly) on the 24th. The majority of Waxwings were accounted for by flocks of 20 at Attlebridge (Norfolk) and 30 at Longforgan (Perth/Kinross). Fourteen Lapland Buntings was the best showing for the species for some time, with the majority along the east coast, including five at Flamborough Head (E. Yorks), though others were in Argyll, Outer Hebrides and Scilly. Away from the north Norfolk coast the only Shore Larks on offer were the long-staying bird at Holmfield (W. Yorkshire) and another at Cresswell (Northumberland). Seven Great Grey Shrikes comprised a regular cohort of well scattered long-stayers too. 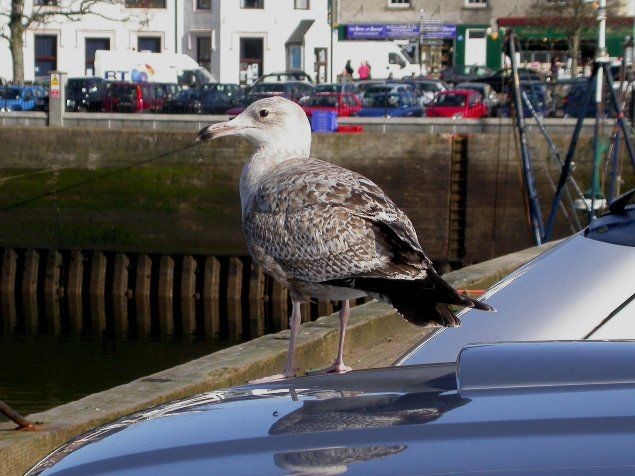 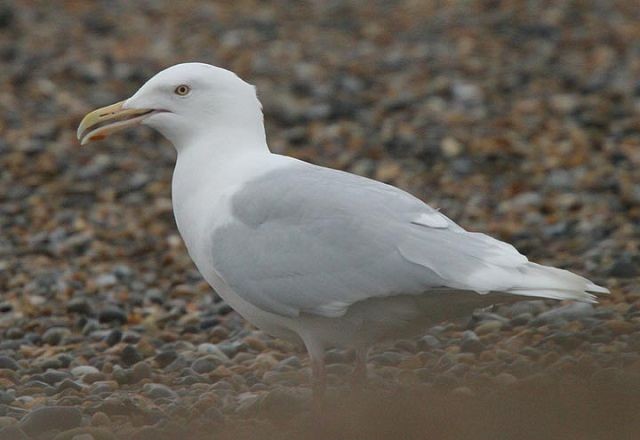 A Brünnich's Guillemot was found dead at Scousburgh, Mainland (Shetland) on 25th, the typical circumstances in which many of the British records have been found. The Laughing Gull remained at Countess Weir (Devon) and a Bonaparte's Gull was reported from Brandon Marsh (Warks) on 27th. The glut of American Herring Gulls continued, with at least two in Cornwall, and others at Stornoway (Outer Hebrides), Annagh Head (Co. Mayo) and Nimmo's Pier (Co. Galway). Half-a-dozen Kumlien's Gulls included several adults, whilst good numbers of Iceland Gulls included 22 at Killybegs (Co. Donegal). Fourteen Ring-billed Gulls were mostly to be found in Ireland, with up to three still at Nimmo's Pier. The Cornish White-billed Diver was off Sennen on 22nd, and others included birds off Lewis and Bernaray (Outer Hebrides) and Whalsay (Shetland). 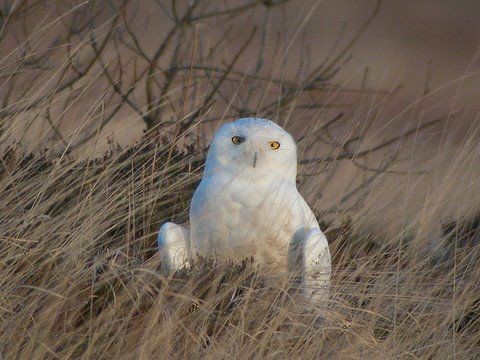 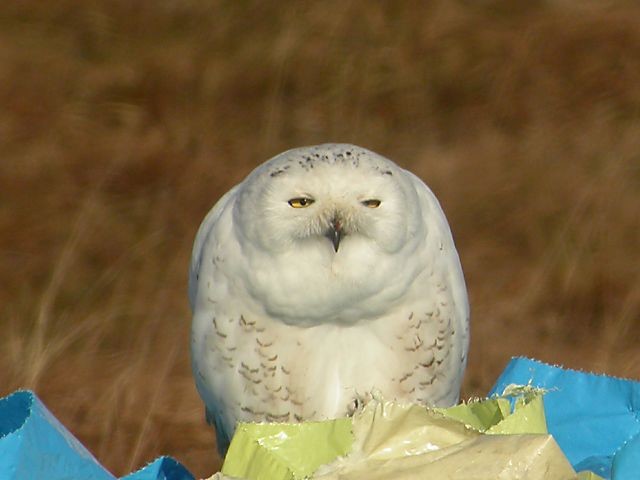 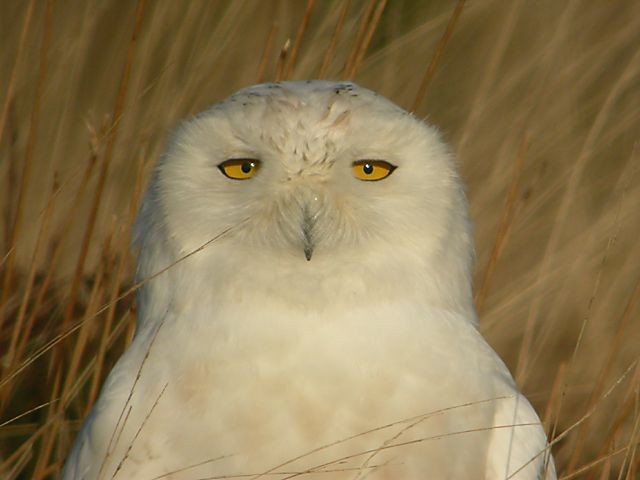 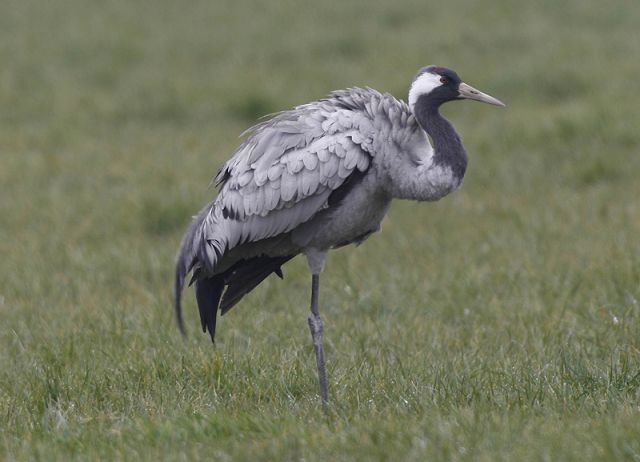 Two male Snowy Owls remained on Lewis (Outer Hebrides) and a possible Gyr Falcon was over St. Mary's (Scilly) on 22nd and 28th, where the adult Night Heron remained in residence. A Great White Egret was at Loch of Banks (Orkney) on the 27th and the Cattle Egret remained on the Otter Estuary (Devon) as did the Glossy Ibis in Lancashire, now at Warton Marsh. The Common Crane remained at Cropredy (Oxon) with other reports from Otmoor (Oxon) on the 26th (possibly the same bird, though if so it was only away from the former site for a few hours) and over Rutland Water (Leics) on 25th. The yellow-ringed White Stork was at Manea (Cambridgeshire) on 23rd and 24th and a presumed escape was seen in West Yorkshire. The Black-eared Kite remained in Norfolk and the White-tailed Eagle was again reported in Aberdeenshire. A Rough-legged Buzzard reported from Crossen's Marsh (Lancs) on the 23rd was the sole report for the species. 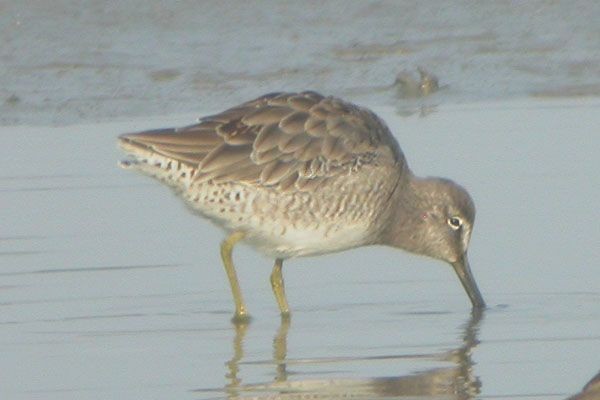 A Pectoral Sandpiper was reported briefly from Marshside (Lancs) on 26th and the Temminck's Stint was at Slimbridge (Glos) to at least he 22nd. The Lesser Yellowlegs was still at Rosscarbery (Co. Cork) as was the Spotted Sandpiper on the Hayle Estuary (Cornwall) and Grey Phalarope at Cross Ness (London). Four Long-billed Dowitchers remained on offer, with long-stayers still in Anglesey, Co. Louth, Essex and Kent. 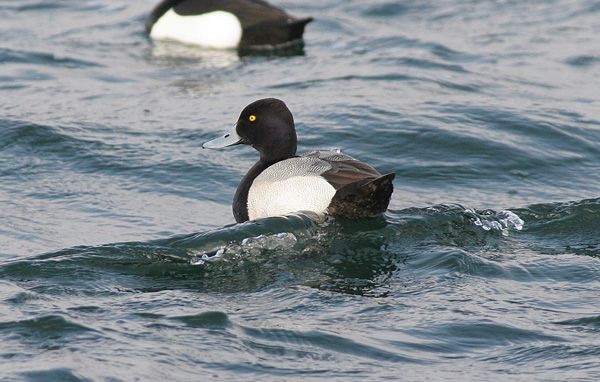 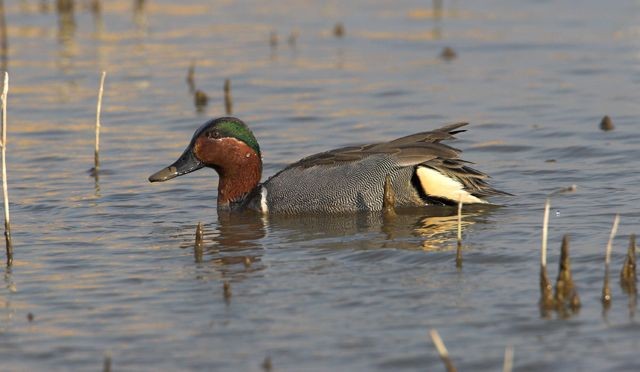 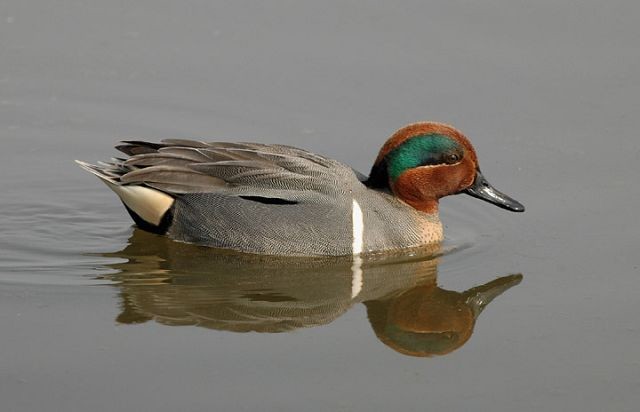 The Barrow's Goldeneye continued to be reported in Forth and the Black Scoter remained off Llanfairfechan (Conwy). Six Lesser Scaup included three on Benbecula (Outer Hebrides) and duck enthusiasts had their pick of 15 Ring-necked Ducks, nine Green-winged Teal, five American Wigeons and two Surf Scoters. The two Red-breasted Geese in Norfolk relocated to Kings Lynn and two Black Brants included one at Wells (Norfolk) and another at Killyleagh (Co. Down). Vagrant Canada Geese remained in Dumfries and Galloway and Northumberland and four Snow Geese included both blue- and white-morph birds still at North Slob (Co. Wexford). 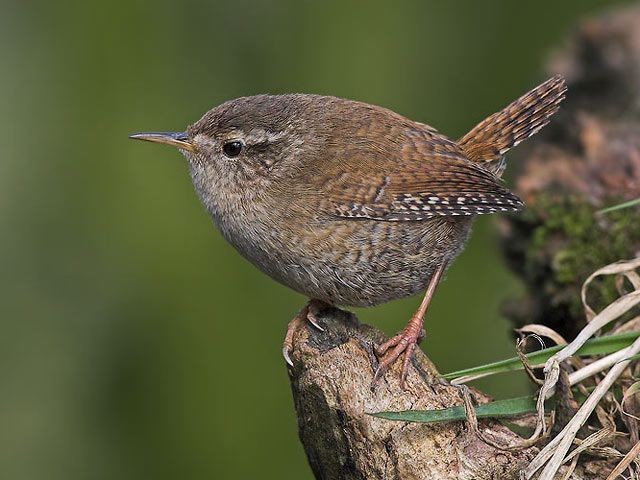 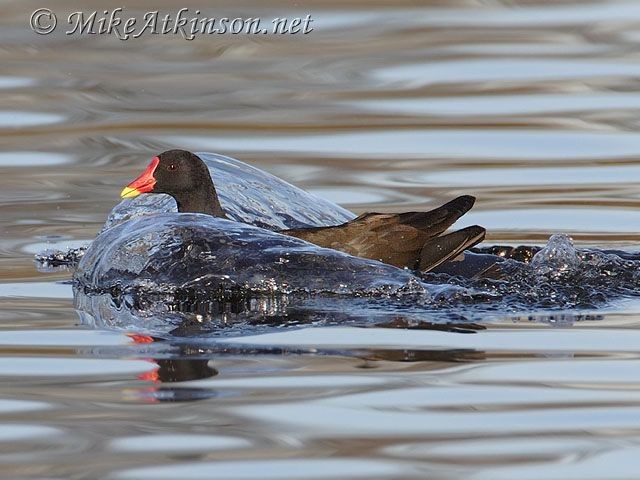 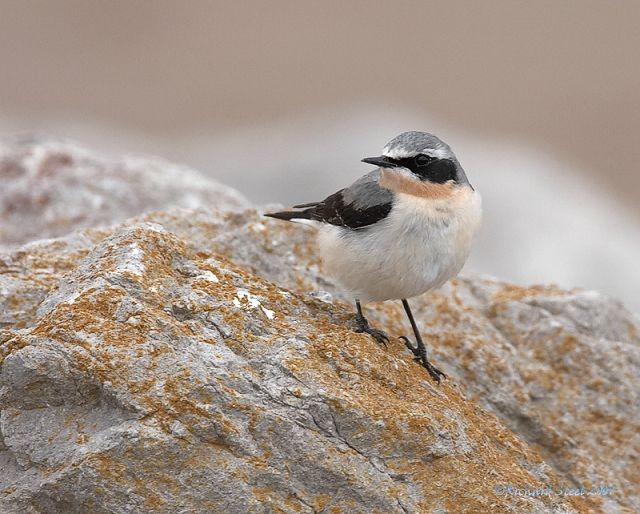 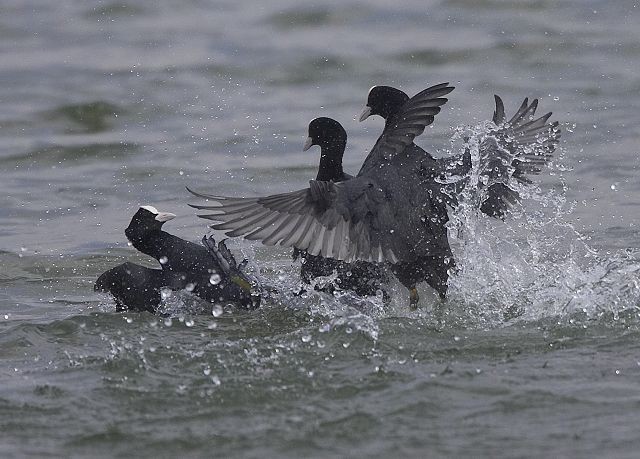