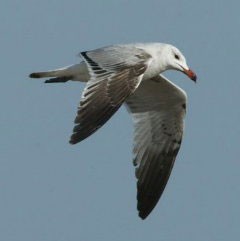 A very busy week in terms of rarities, but pickings for the dedicated patch-watchers in many parts of the country were few and far between. Skua passage stepped up a gear with some good counts of Pomarine Skuas noted past Cumbria and the Outer Hebrides.

For the second week running there was an addition to the British list. A 2nd-summer Audouin's Gull at Dungeness from 5th onwards was gratefully received by large numbers of birders. Audouin's Gull has long been touted as an addition to the British list and this bird will have come as little surprise to those of you who follow the European birding scene. Recently, a 2nd-summer was seen for just two hours in Zeeland, The Netherlands, on 1st May and following its prompt departure the smart money was on this bird to turn up in southeast England, which it promptly did on a Bank Holiday – what is it about Bank Holidays and extremely rare birds? The Dungeness bird has generally shown very well since its discovery early afternoon on 5th coaxing many a latent twitcher to take to the road to see it.

Running a close second had it hung around would have been the male Eleonora's Falcon watched for just under a couple of minutes on Tiree (Argyll) on the 1st, before it flew off never to be seen again. With just four accepted records, none have lingered and the last was as long ago as 1987 in Norfolk. Long overdue perhaps, a showy bird would doubtless prove very popular indeed. In most weeks a Dark-eyed Junco on Out Skerries (Shetland) would have easily been the tastiest sighting of the week, but it had serious competition this week! This bird was first caught in a playhouse in a back garden on the 1st and was still present on 7th. This is the first national record since two spring sightings in 2000; the last to be twitchable was one in Cheshire from December 1997 into April 1998. Spring is of course one of the prime times for American sparrows and the like and the Northern Isles one of the better places to find them; this was the third for Shetland and the first since one on – Out Skerries on 7th May 1969!

A Black-headed Wagtail on St. Mary's (Scilly) on 6th May was yet another extremely rare bird to be seen during the week, but in common with most of the 9 previous records it did not linger long enough for a wider appreciation. Continuing with the Mediterranean theme, there were 5 Woodchat Shrikes during the week with two on Scilly, singles in Wexford and Lincs and an excellent inland find in Bucks at Langley Park. Two Tawny Pipits were reported in Norfolk and another in East Yorks, a Melodious Warbler was on St. Mary’s and Subalpine Warblers in Cornwall, Pembrokeshire and Shetland. A superb Red-throated Pipit was a good find at Northam Burrows CP (Devon) from 3rd-4th, a Richard’s Pipit was in Norfolk, and another Little Bunting was found, this time on the Saltee Islands (Wexford) on the 5th, with the bird at Sennen last seen on 3rd. Three Short-toed Larks were seen, with birds on St. Martin’s, St. Agnes and Saltee Islands. Small numbers of Red-rumped Swallows remained from last weeks influx, but the excitement was pretty much over by the 4th, whilst at least 6 Alpine Swifts whizzed by their observers during the week, with the exception of the Minsmere/Sizewell bird which continued to be seen to the 5th. A party of three Bee-eaters over a South Yorkshire quarry unfortunately did not linger and another was seen in Pembrokeshire. Scarce migrants were scarce in spite of the number of rarities and the week yielded just 14 Golden Orioles, 5 Hoopoes, 8 Serins, 4 Wrynecks, one Red-backed Shrike and a Bluethroat.

Nearctic waders were again picked up during the week. The Spotted Sandpiper was last seen at Ogston Reservoir (Derbyshire) on 1st, whilst the Lesser Yellowlegs at Thorne NNR was last seen on the 2nd, but this, or another, was found at Hauxley NR (Northumbs) from 5th onwards. An American Golden Plover spent much of the morning at Nosterfield NR (N. Yorks) on 5th, before flying off never to return. Spring Pectoral Sandpipers are expected and birds at Cley (Norfolk) and Catcott Lows (Somerset) conformed to expectations, whilst a Buff-breasted Sandpiper was at Aberlady Bay (Lothian) on 7th. A Marsh Sandpiper at Saltholme Pool (Cleveland) from 6th was only the 2nd county record – the first was as long ago as 1963. In Norfolk a 1st-winter Bonaparte's Gull from 2nd at Hickling Broad was the first for the county since 1970 and only the 3rd ever, though this was a different bird to the Fairburn individual which was last seen on the 1st. Another Bonaparte's Gull was on the Bann Estuary (Londonderry), where there was also a Forster's Tern, with another seen in County Down. A Blue-winged Teal on the sea with 2 Shovelers for a short time off Goring Gap (W. Sussex) on 7th was an unusual record. A Gull-billed Tern passed north at Landguard NR (Suffolk) on 2nd. Finally, a possible Little Crake was singing in Kent from 4th –one for the sonogram analysts to sort out!