A week of somewhat unsettled weather, with still little sign of a true English summer - though some would argue that the sunshine and showers and brisk winds are exactly what an English summer is all about. No matter though, as a few new birds appeared, and the unsettled conditions, coupled with the time of year, saw a few shorebirds appear across the country, with a brief Semipalmated Sandpiper at Minsmere (Suffolk) on 18th being the cream of the crop. This was the second record for the reserve, and the fourth record for the county. A second bird turned up on the beach at Aird an Runair, N. Uist (Outer Hebrides) on 20th. Following the report of a Canvasback last week at Hornsea Mere (East Yorkshire) two apparent hybrid (female) Canvasback x Pochard were seen at the same site on 18th.

The stunning adult White-billed Diver remained around St. Margaret's Hope, South Ronaldsay (Orkney) to 22nd. Cory's Shearwaters flew past Corsewall Point (Dumfries & Galloway), Kinnaird Head (Aberdeenshire) and Selsey Bill (W. Sussex) this week, while Sooty Shearwaters appeared off the coasts of Angus & Dundee, Cleveland, Cornwall, Donegal, Durham, East Yorkshire, North Yorkshire, Northumberland, the Orkneys, the Outer Hebrides, Suffolk and West Sussex, with the largest numbers off Co. Donegal (22 past Melmore Head and 13 past Fanad Head, both on 19th). Balearic Shearwaters were recorded off Co. Cork, Cornwall, Devon, Dorset, Co. Durham, East Sussex, Kent, Norfolk and West Sussex, with the largest counts being 21 off Pentire Point (Cornwall) on 23rd, 19 off Selsey Bill (West Sussex) on 22nd and 16 from Portland Bill (Dorset) on 17th. Wilson's Storm-petrels were seen during pelagic trips run from St. Mary's (Scilly), on 17th and 21st. On North Ronaldsay, a Leach's Storm-petrel was trapped and ringed overnight on 17th and on 19th, daytime singles were seen off Crosby Marine Park (Merseyside) and Kilcummin Head, and two were sighted from a boat between Arisaig and Eigg in western Scotland on 21st. Numerous single-figure tallies of European Storm-petrels were seen this week, but 53 off Kilcummin Head on 19th and 60 or more off Scilly on 17th were the highest totals. Pomarine Skuas were seen off the coasts of Lincolnshire, Cornwall, Cumbria, Cleveland, Co. Durham, East Yorkshire, Fife, Scilly and West Sussex. A very early autumn Grey Phalarope was noted from Rumps Point (Cornwall) on 19th. 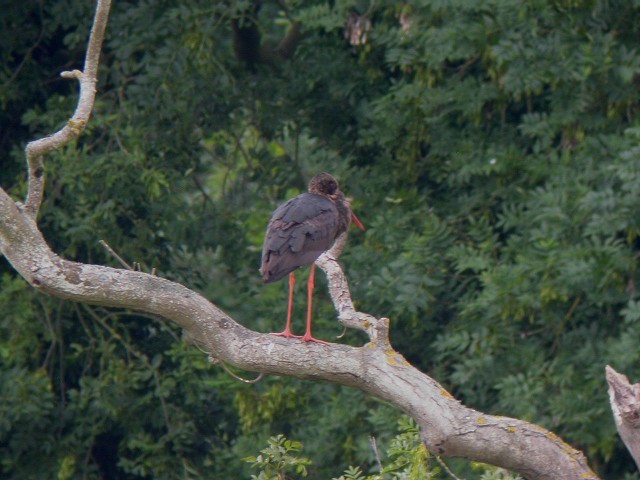 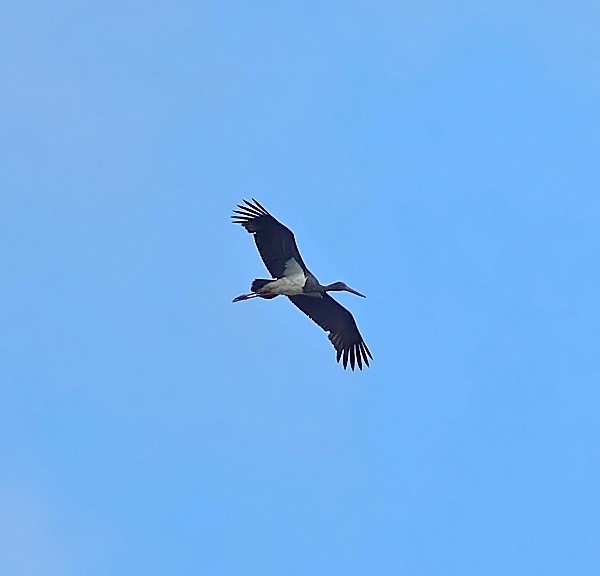 It seems as though last week's Cattle Egret report from Siblyback Reservoir (Cornwall) on 16th was not wholly accurate...more reliable were the records from Lodmoor and Radipole Lake (Dorset) on 17th-18th and another was also seen at Pagham Harbour (West Sussex) on 19th and 23rd. As we predicted in this newsletter earlier this year, the first successful breeding of Cattle Egret in the UK was confirmed, with the announcement that at least one youngster had been raised to fledging stage at an undisclosed site in Somerset. Great White Egrets were reported from Pennington Marshes (Hampshire) and Portland (Dorset). Spoonbills this week included groups of nine at Breydon Water (Norfolk) on 23rd, and three groups of six: at Cley Marshes NWT (Norfolk), Poole Harbour (Dorset) and Minsmere (Suffolk). Up to three Spoonbills were at Leighton Moss in Lancashire with, in the same county, other records from Martin Mere and a flyover over Darwen on 22nd. Two birds remained at Kinneil Lagoon (Forth) to 21st and another twosome were still on Exminster Marshes (Devon) this week. Notable singles were seen in East Yorkshire, West Yorkshire, Cheshire, Hampshire and the Isle of Wight. The Glossy Ibis lingered at Inner Marsh Farm until 17th, before dropping in at Martin Mere (Lancashire) on 18th before heading back to Marshside on 19th. A new bird was seen along the River Fergus in Ennis (Co. Clare) on 23rd. In Shropshire, the pair of Common Cranes remained near Crudgington to 23rd at least and three were seen at Welney (Norfolk) on 20th. On the Dorset/Hampshire border, a White Stork was seen near Sopley on 19th, and probably the same bird was seen over Christchurch Harbour (Dorset) twice the following morning. Another bird was seen over Bitterne, Southampton (Hants) on 23rd. In Kent, some birders finally managed to catch up with a (still highly prized) Black Stork this year - one was seen near Chartham on 18th and was noted over Stodmarsh before reappearing near Seaton and Ickham later on in the evening of 18th, and again on the morning of 19th, before heading off again, being reported last from Sandwich. Sightings in Essex, over Braintree on 21st and Shoebury on 23rd, may have involved the same individual. 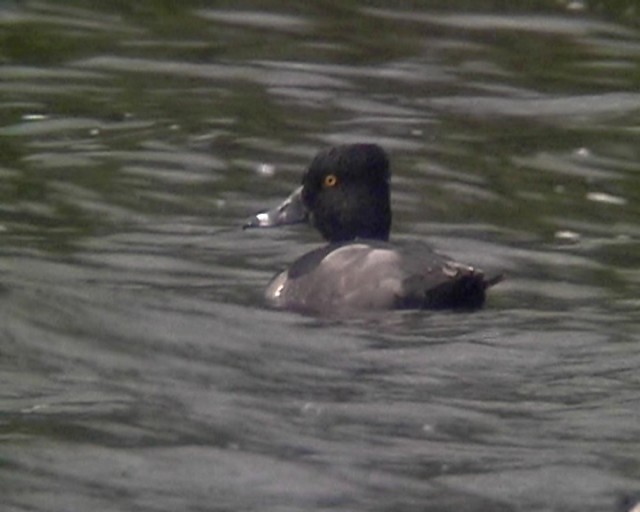 The first-summer drake Hooded Merganser was still around Radipole Lake (Dorset) to 23rd at least, enjoying the company of the local mallards amongst other things. An eclipse drake Ring-necked Duck was found on Linlithgow Loch (Lothian) on 19th and a different bird, another eclipse drake, was reported at Loch Gelly (Fife) for its fourth day on 23rd. A Ferruginous Duck was on Chew Valley Lake (Somerset) on 21st and a Lesser Scaup on Balgray Reservoir (Clyde) on 21st and 22nd. The drake Surf Scoter remained off Delting (Shetland) to 22nd at least and the King Eider was still off Tacumshin (Co. Wexford) on 20th.

A Black Kite was seen between Corby Glen and Irnham (Lincolnshire) on 20th, with another reported over Barry Docks (Glamorgan) on 23rd. Up to three or four Honey Buzzards were still being seen by visitors to the watchpoints at Swanton Novers (Norfolk) and Wykeham Forest (North Yorkshire) this week, while two birds were reported near Minster (Kent) on 18th, and another over Baron's Haugh (Clyde) on 21st. A ringtail Montagu's Harrier was again at Elmley (Kent) to 21st, with other reports including two at Gibraltar Point (Lincs) on 20th, one at Scaling Dam Reservoir (Cleveland) on 21st, and a female at Sunk Island (E. Yorks) on 22nd and 23rd. A male Red-footed Falcon was reported at Steep Down near Lancing (W. Sussex) on 22nd, but not seen the next day. 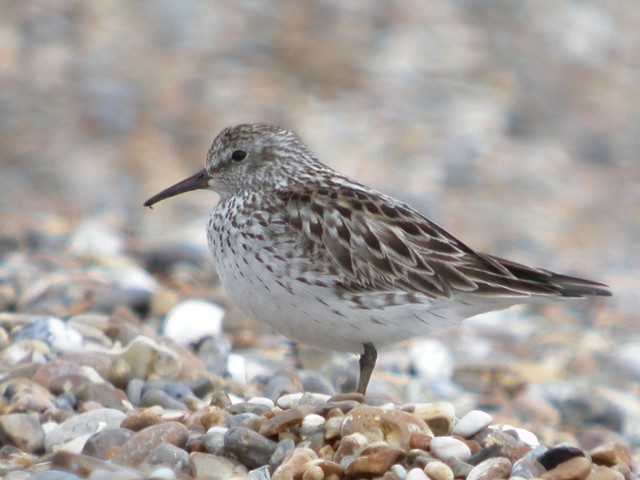 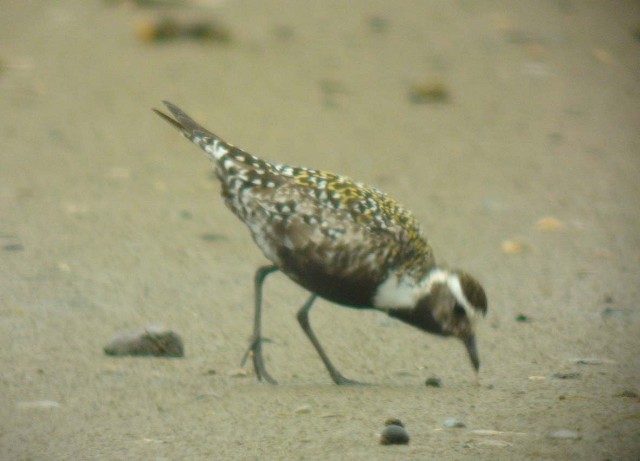 Along with the Semipalmated Sandpiper, Suffolk's Minsmere held on to its adult White-rumped Sandpiper until 20th, with the same or another at Cley (Norfolk) from 22nd. A Pectoral Sandpiper was also at Minsmere for good measure to 22nd. This was one of a number of "Pecs" that arrived this week: counties represented included Cleveland, Dorset, Co. Down, Essex, Kent, Leicestershire, Norfolk, the Outer Hebrides and South Yorkshire. In County Wexford, the White-rumped and Pectoral Sandpipers remained at Tacumshin until 19th at least. The Buff-breasted Sandpiper seen briefly last week at Alkborough Flats (Lincolnshire) was noted again on 18th-19th. An American Golden Plover was on the Add Estuary (Argyll) on 21st, but not seen the following day. 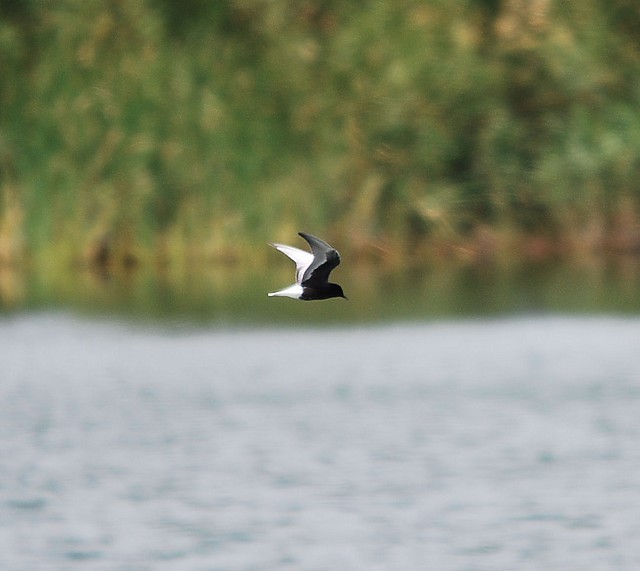 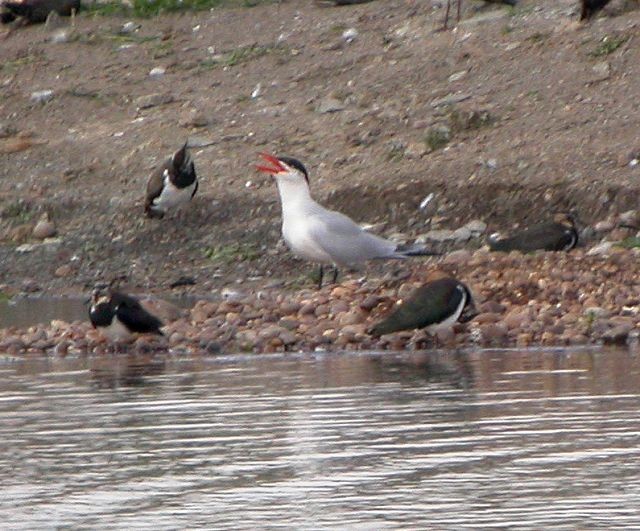 Midsummer Iceland Gulls were seen on Tiree (Argyll) on 17th, while two birds were on Loch Spynie (Moray) on 18th, a juvenile was at Porthloo, St. Mary's (Scilly) on 23rd and 24th and a 1st-summer was on the beach at Siadar, Lewis (Outer Hebrides) on 21st (where there were also two 1st-summer Glaucous Gulls). Sabine's Gulls were seen off Whitburn (Co. Durham) and Wallasey (Cheshire) on 20th. A second-summer Caspian Gull was at Willington GPs (Derbyshire) on 19th, and another at Tanholt GPs (Cambs) on 23rd. A Caspian Tern was seen and photographed at Collingham Pits (Notts) on 23rd and the adult White-winged Black Tern remained at Rye Harbour (East Sussex) from 17th-20th. 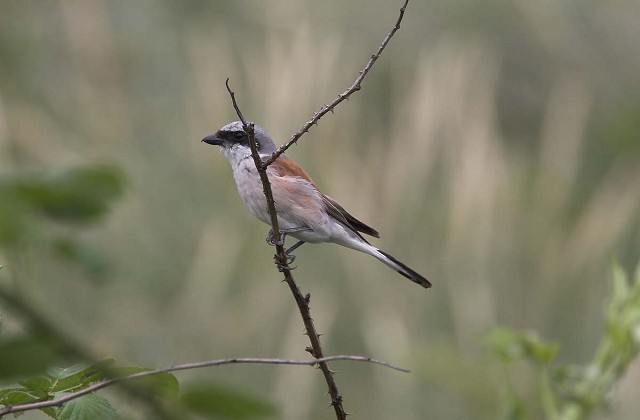 A Snowy Owl was out on far-flung St. Kilda (Outer Hebrides) on 17th, while somewhat closer to home was the summering male Red-backed Shrike at Sea Palling (Norfolk) which was still in place to 22nd, and a Wryneck was reported from Cally, on the Wirral, on 18th. A very unseasonable bird was the Shore Lark at Spurn (East Yorkshire) on 17th which was seen again at Beacon Ponds on 20th (having first appeared on 13th). 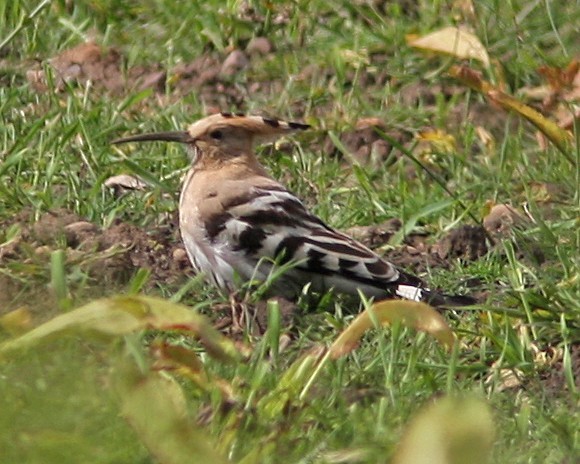 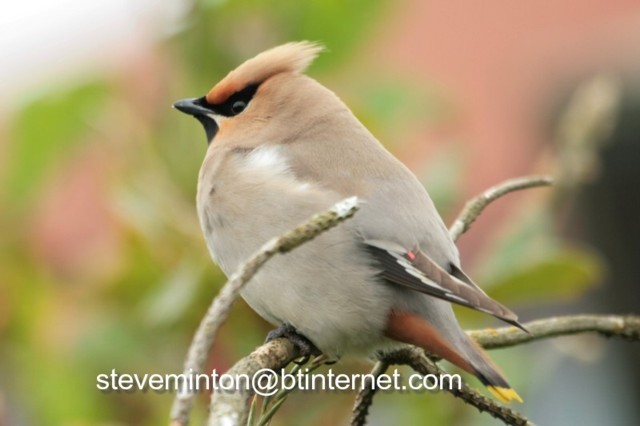 A Rose-coloured Starling was noted in gardens at Arklow (Co. Wicklow) on 13th-17th, with others at Siadar, Lewis (Outer Hebrides) on 19th-23rd, Wester Quarff (Shetland) on 20th, Scarfskerry (Highland) on 22nd and the bird at Hayle (Cornwall) was reported again on 21st. A Bee-eater appeared in Witham (Essex) on the morning off 22nd but, typically, did not linger, and a late Hoopoe showed well at Dunnington (N. Yorks) on 21st and 22nd. Given the recent influx of Common Crossbills, Two-barred Crossbill sightings were perhaps to be expected, and a male, perhaps the first of many, turned up at Evie (Orkney) on 20th. Finally, an unseasonable pair of Waxwings turned up in gardens at Scatness (Shetland) on 20th. 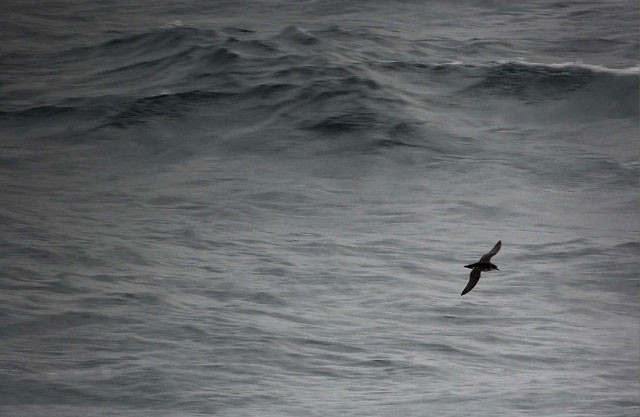 In the majority of bird images, the bird needs to occupy a reasonable proportion of the frame to avoid looking 'lost'. In some cases, though, a bird can be used effectively as a focal point in a landscape-type photograph. These types of images work best when the bird is depicted within its natural environment. Pauline Greenhalgh has used this technique to great effect with her low-key, near-monochrome image of a Manx Shearwater gliding in characteristic fashion above a sinister-looking sea. Pauline makes good use of the Rule of Thirds in her composition, with extra tension created by showing the subject flying out of the frame. This is very much the type of fusion of nature and art that is sought after in international wildlife photography competitions. 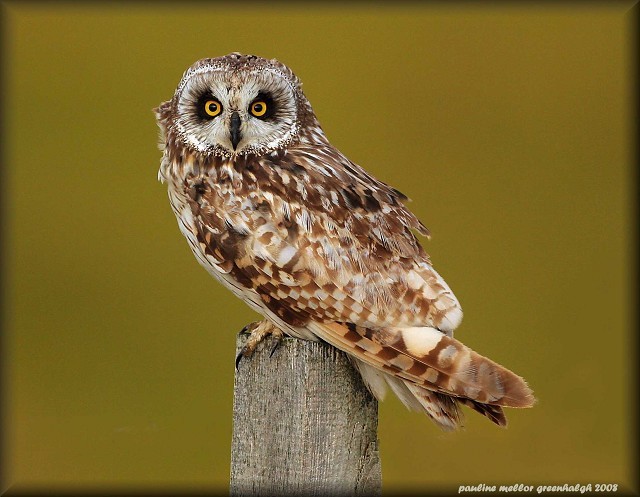 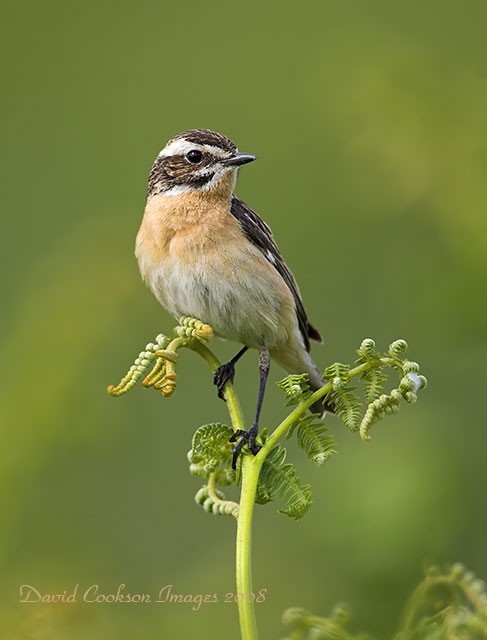 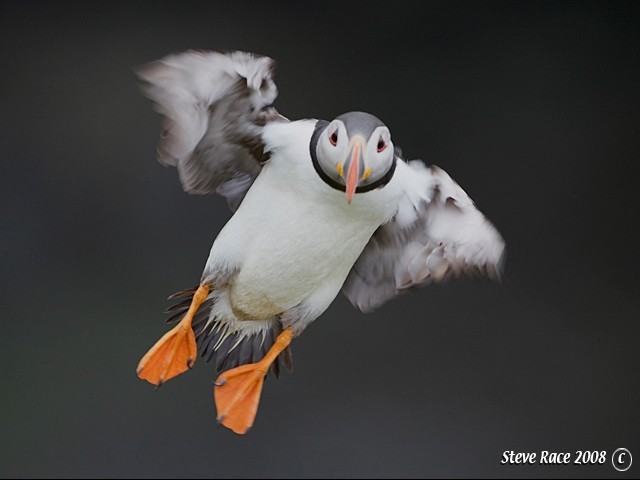 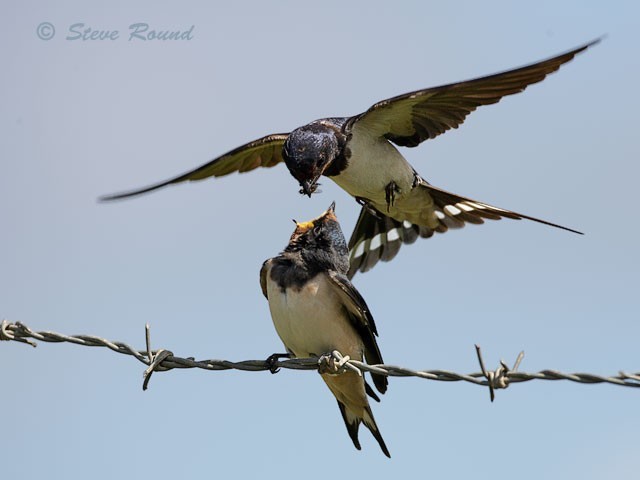 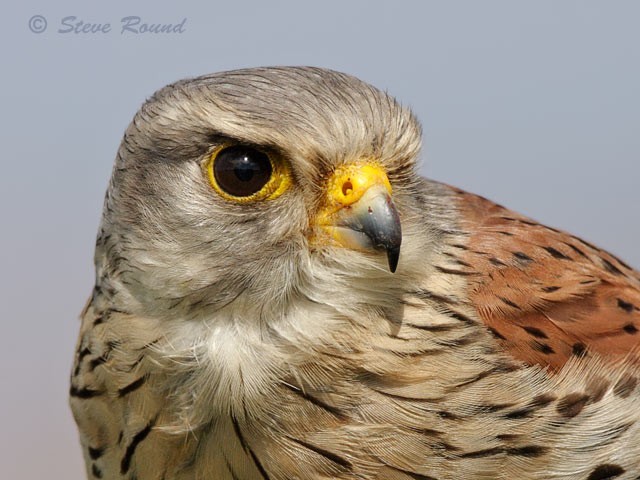 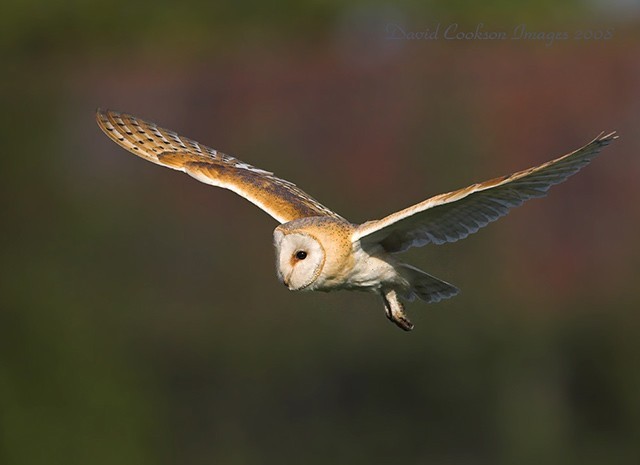 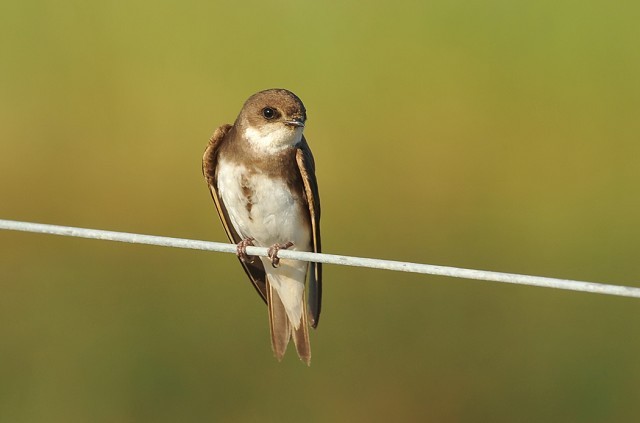 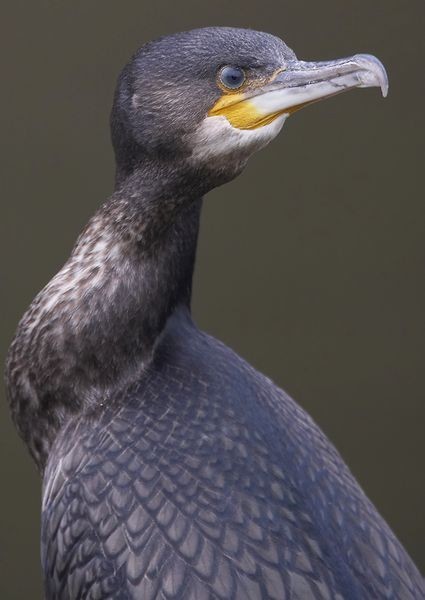 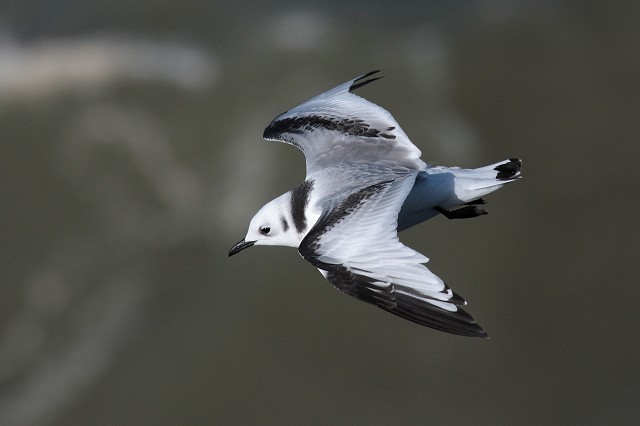 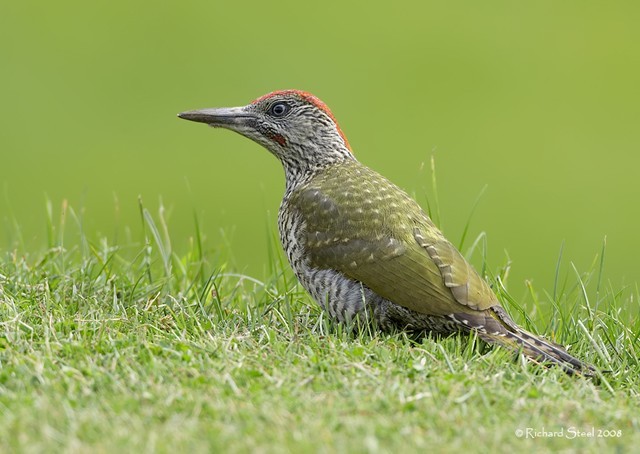 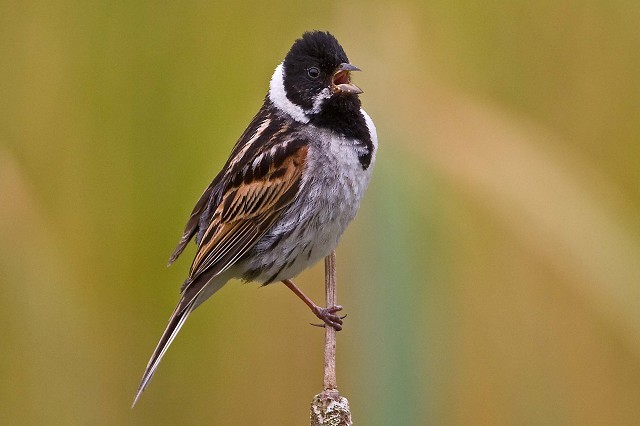 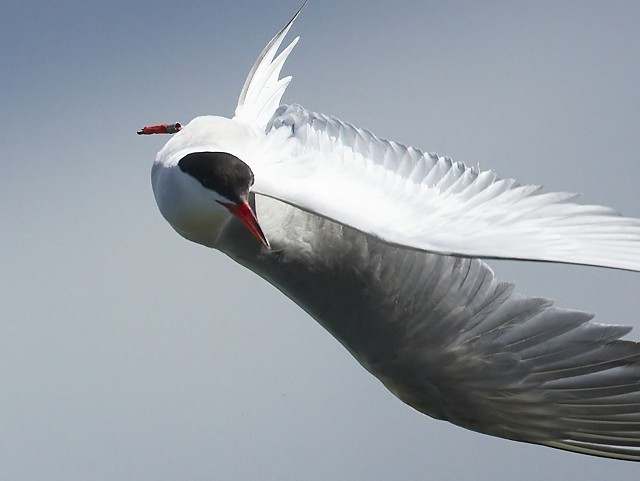