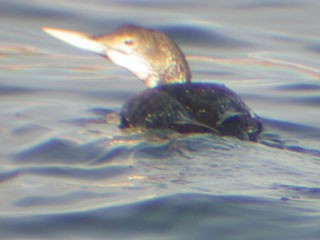 
A blast of exceptionally cold weather and snow through much of the latter part of the week for eastern and northern areas did little to stir things up, with very few 'new' birds reported. An immature Snowy Owl was at Lough Foyle (Londonderry) from Saturday 19th-21st. A dashing Gyr Falcon was at Great Bernera, Lewis (Outer Hebrides) on Thursday 17th and another again at Haroldswick, Unst (Shetland) on Tuesday 22nd and 23rd. An obliging White-billed Diver was off Collafirth (Shetland) from Sunday 20th to at least 23rd and there was a report of a Great White Egret at Milton Keynes (Bucks) on Monday 21st. In Lincolnshire the White-tailed Eagle was again seen, this time at Oxcombe on Tuesday 22nd.

An Arctic Redpoll reported from Westdean Woods (W. Sussex) on Sunday 20th, would, if accepted, be a county first, whilst the obliging 1st-winter remained at Titchwell RSPB (Norfolk). In Worcestershire the male Little Bunting remains at Caunsall, as do the Pallas's Warbler at Crossley (Cheshire), Dusky Warbler at Kessingland (Suffolk) and Richard's Pipit at Kinmel Bay (Conwy). A Yellow-browed Warbler was reported from West Stowe CP (Suffolk) on Thursday 17th, being also reported there on 8th. In contrast to recent weeks there were just 9 Great Grey Shrikes noted, and just under a dozen Siberian Chiffchaffs included 3 at Upton on Severn (Worcs) and 3 in the company of 60 Chiffchaffs at St. Columb Major (Cornwall). Small numbers of Northern Bullfinches were noted, 6 of which were at Finstown (Orkney). 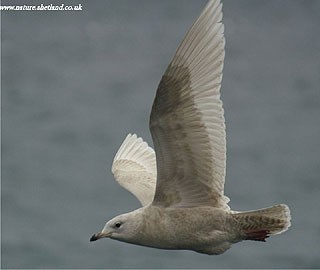 A 1st-winter American Herring Gull remained at Dingle (Co. Kerry) and white-winged gulls were still very much in evidence, with peak counts including 35 Iceland Gulls at Killybegs (Co. Donegal) and 23 at Stornoway (Outer Hebrides), with a maximum of 12 Glaucous Gulls at Kilcummin Head (Co. Mayo). Kumlien's Gulls were into double-figures as were Caspian Gull reports, and a total of 34 Ring-billed Gulls included 7 at The Mullet (Co. Mayo) and 5 at Cobh (Co. Cork). In Co. Galway the Forster's Tern continued to entertain. A Leach's Storm-petrel was noted off South Gare (Cleveland) on Wednesday 23rd, but the strong north and north-easterly winds produced little in the way of seawatching reward for those prepared to brave the elements. Two Pomarine Skuas passed Holme (Norfolk) on 19th, and 16 Little Auks were logged, 10 of which were at the mouth of Loch Carron (Highland). A Grey Phalarope was off Dungeness (Kent) on Monday 21st and 23rd. 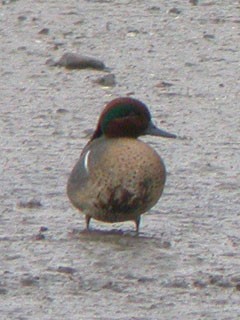 
There was an air of familiarity about the rare ducks on offer. The drake Black Duck was still on Keele Lough (Co. Mayo) as was the female on Tresco (Scilly). The Lesser Scaup remained at Scotney GPs (E. Sussex). King Eiders remained in Aberdeenshire, Shetland and Dumfries and Galloway, a drake Ferruginous Duck was found at Abberton Reservoir (Essex) and the female lingered in Bedfordshire, whilst just 4 Ring-necked Ducks were reported, along with 5 Surf Scoters, 9 Green-winged Teals and 3 American Wigeon. The two Trumpeter Swans of unknown origin were last seen at Bowling Green Marsh (Devon) on 19th and Snow Geese remained in Norfolk, Argyll and Co. Wexford. The Short-billed Dowitcher again put in an appearance at North Bull Island (Dublin) on 19th and 20th and the Lesser Yellowlegs was still a permanent fixture at Stiffkey (Norfolk).

Unusual sightings during the week included the incongruous sight of single Swallows at Exeter (Devon) on 18th, Gowy Meadows (Cheshire) on 20th and Terrick (Bucks) on 23rd. There was a Willow Warbler in Worcestershire, the Lesser Whitethroat remained in Glamorgan as did the Common Redstart in London, a Turtle Dove in North Yorkshire succumbed to a local Sparrowhawk and a Curlew Sandpiper was at Abbott's Hall Farm (Essex) from 22nd onwards.