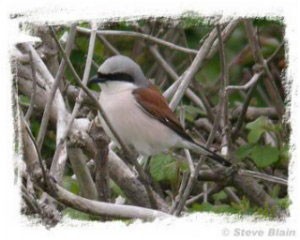 Red-backed Shrike: Holme, Norfolk. As Martin Garner points out, the white patch at the base of the primaries used to indicate the eastern form kobylini. Now its uncertain whether it just occurs occasionally in the western population or is a result of a genetic mix of Isabelline Shrikes getting into collurio and is therefore commoner in Red-backed Shrikes from further east. (Photo: Steve Blain)


Despite the fact it was a week of three quality 'megas' and a good fall on the Northern Isles many birders were left muttering "Spring, what spring, worst year ever" as they trudged around their local patches in the hope of something to buck the sorry trend. It has been an exceptionally quiet spring for those who like to find their own birds, and there have been no falls of migrants, or noticeable movements. A glimmer of hope was provided just before the weekend as a forecast of southeasterlies and rain heightened many an east coast birder's spirits. This faint hope was rapidly quashed closer to the time as the southeasterlies drifted all the way up the North Sea, hitting the Northern Isles, bypassing the east coast, leaving most birders frustrated whilst these superb islands enjoyed a decent fall of scarce migrants and a mega.


For the second time this spring a mega rare sibe turned up as a spring migrant. A Thick-billed Warbler was trapped on Fair Isle early morning on 16th and remained to the 17th. This is only the fourth British record, and the second for this magical isle following one on 6th October 1955. Previous records include one trapped on Whalsay on 23rd September 1971 and one on Out Skerries on 14th September 2001. There are just two other Western Palearctic records, with one seen in Egypt on 20th November 1991 and one trapped in Finland on 11th October 1994. Thick-billed Warblers breed in southern Siberia, northern Mongolia and southeast China, and winter in the foothills of the Himalayas, eastern India and southeast Asia. Presumably this bird had reached Europe last autumn and got caught up in a return movement this spring before being caught on Fair Isle.


Continuing the Nearctic sparrow theme for the spring a White-crowned Sparrow was found at Dursey Sound (Co. Cork) on 20th. There have been just four previous records of this attractive sparrow, the last of which at Seaforth Docks on 2nd October 1995 was presumably ship-assisted. Another was seen at sea on the QE II in Southampton Water on 26th September 1988. There were two spring birds in 1977 (Fair Isle on 15th (and 16th) May and Hornsea Mere on 22nd May) and this bird fits the spring pattern of Nearctic sparrows nicely. Had this bird made landfall in Britain it would have proved very popular indeed, but places don't come much further west than this part of Co. Cork. There are other European records, from France, Iceland and The Netherlands.

The third quality bird of the week was an Iberian Chiffchaff at Kingswear (Devon) from 20th onwards. Following recent elevation to full species status, there have been four accepted records since 1999, plus two prior to this, and another well watched (and heard) bird in Kent in 2001. Clearly birders have got tuned in to the distinctive song of this species now and in years to come it may well turn out to be an annual vagrant to these shores.


Dungeness again managed to turn up another good bird with a Great Reed Warbler on the RSPB reserve on 15th and another was at Marton Mere (Lancs) from 21st. Given the easterly element to the weather Thrush Nightingales at Blakeney Point (Norfolk) from 16th-17th and Gibraltar Point (Lincs) from 19th-21st were not unexpected, but both gave would-be observers the run-around, the latter showing just once. The southeasterlies delivered good numbers of scarce migrants, including over half a dozen Wrynecks, and Common Rosefinches, ten Icterine Warblers, ten Bluethroats and at least 26 Red-backed Shrikes. The vast majority of these scarce migrants were on Shetland, and just one Red-backed Shrike was seen away from the Northern Isles, with a stunning male at Holme (Norfolk). Associated with this fall were a Red-throated Pipit on Fair Isle on 16th and at least half a dozen resplendent Grey-headed Wagtails, including birds in North Yorkshire and Lothian. There were 8 well-scattered migrant Golden Orioles, two Subalpine Warblers on Shetland, Short-toed Lark on St. Agnes and Tawny Pipits at Blakeney Point (Norfolk) and Saltee Islands (Wexford), with the first Ortolan Bunting of the spring on the latter. The only Hoopoes of the week were in Northants and Norfolk and an adult Rose-coloured Starling in Argyll on 21st was presumably a wandering remnant from last year's influx into northwest Europe. Finally, a Great Grey Shrike was on Shetland and a singing Waxwing was picked up in Sutherland.


In Norfolk a 1st-summer Pallid Harrier flew west over three sites on the 16th and in the same county a male was seen on the 17th. Two Red-footed Falcons were reported during the week, one in Warwickshire and the other in Norfolk. A Collared Pratincole was reported in Suffolk on 16th, with possibly the same bird at Cliffe (Kent) on 20th. Rare waders were in short supply this week, but a Marsh Sandpiper was at Walland Marsh (Kent) on 21st, female Kentish Plover at Dawlish Warren (Devon) on 17th and a Pectoral Sandpiper at Slimbridge (Glos) on 18th. In addition, a number of inland sites enjoyed a small movement of Arctic waders, including Sanderling and Turnstones, and there were 19 Temminck's Stints reported, including 4 together at Cotswold Water Park (Glos) and Stiffkey Fen (Norfolk). Small numbers of Dotterel were found during the week, with trips in Cambs and Yorks proving deservedly popular. A Forster's Tern was at Lady Island's Lake (Wexford) on 20th and two Bonaparte's Gulls were in Cork, plus the long-staying birds in Yorks and Norfolk.


The Little Bittern from last week was last seen on the 18th at Dungeness RSPB, whilst the Savi's Warblers on Scilly and Lancashire both remain. At least seven Quail were reported during the week. A Shorelark was a late migrant on Scilly and small numbers of skuas were seen with just a handful of single Long-tailed Skua records and just 25 Pomarine Skuas, all single counts. In County Down a Sabine's Gull off Copeland island was an unusual spring record.

So, plenty to trouble the rarity statisticians, but not a lot to tempt day-to-day patchwatchers. With yet more westerlies and northwesterlies forecast, the prospects don't look set to improve much either, though are rarity or two will surely be found – it could be you!