A very typical mid-July week passed, with news at a low ebb and just the occasional new rare to punctuate the calmness. Highlight of the week was the Isles of Scilly's third Least Sandpiper, a smart adult favouring the Big Pool on St Agnes from 16th onwards. Least Sandpiper is one of those deceptively rare species that arguably borders on 'mega' status — the last British record of the species also came from Scilly (a juvenile on Tresco in October 2011) and the last in Ireland was in August 2012. This is, incidentally, the sixth July record and the earliest ever 'autumn' occurrence. 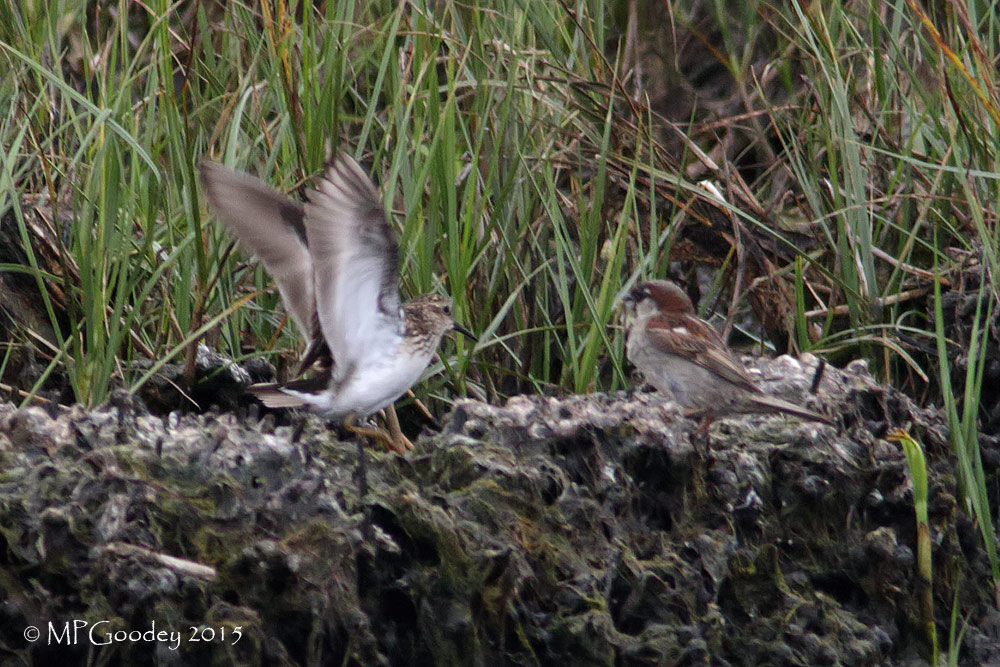 On the English south coast both the Hudsonian Whimbrel and Greater Yellowlegs remained throughout the week in West Sussex and Hampshire respectively, while a Black-winged Stilt was still at Cliffe Pools, Kent, to 15th at least. 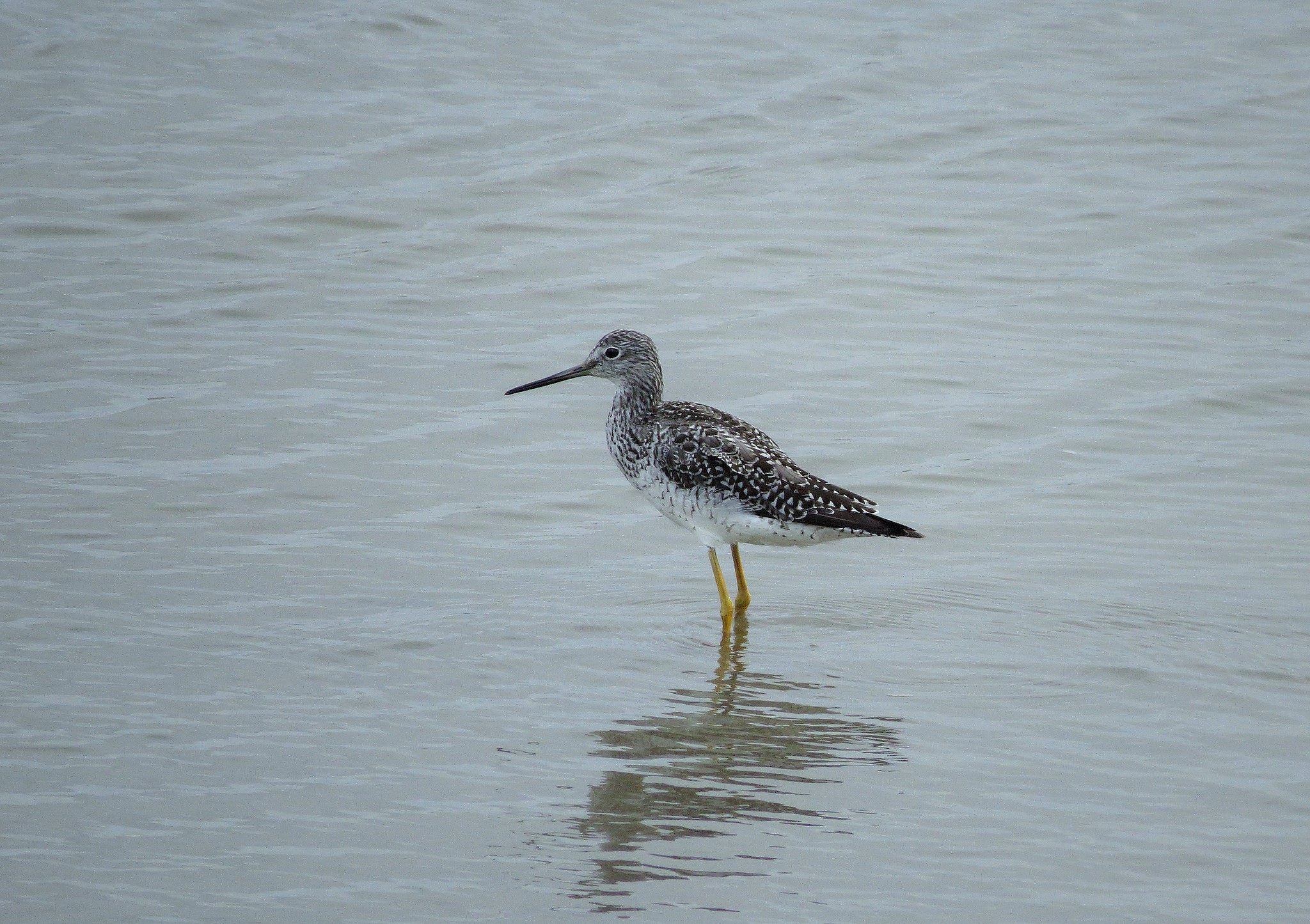 Another of the week's best finds was an adult Broad-billed Sandpiper among the roosting waders on the pits at Snettisham, Norfolk, on 18th. It lingered until 21st but was only obtainable in the mornings over high tide. A good showing of four adult White-rumped Sandpipers was noted in the week, with a bird at Hatfield Moors, S Yorks, on 15th the stand-out record; others were at Tacumshin, Co Wexford, from 19th (where there was also a Pectoral Sandpiper) and on North Ronaldsay, Orkney, on 20th in addition to the lingering bird at Beacon Ponds, E Yorks. Three further Pec Sands were noted: at Musselburgh Lagoons, Lothian, and Campbeltown, Argyll, both on 19th and then a surprise inland record from Fowlmere, Cambs, on 20th. Following a bird in off the sea at Spurn earlier that morning, a Temminck's Stint at Stone Creek, E Yorks, on 18th could have been the same individual relocating. Another was at Frampton Marsh, Lincs, from 16–19th and two dropped in at Oare Marshes, Kent, from 18th. A Red-necked Phalarope was seen on South Uist on 18th, two were off Rocky Point, Co Donegal, that day and a Grey Phalarope at sea off Baltimore, Co Cork, on 19th mixed things up a bit. The Spotted Crake was again noted at Titchwell, Norfolk, on 21st. 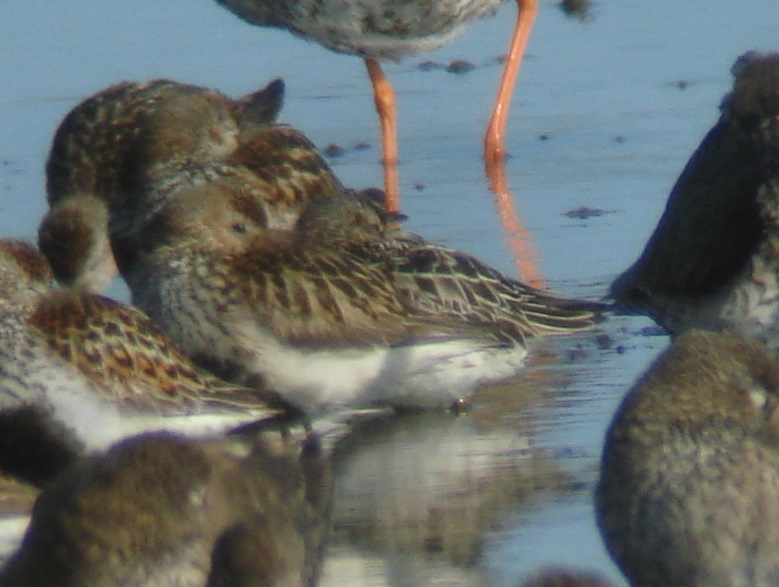 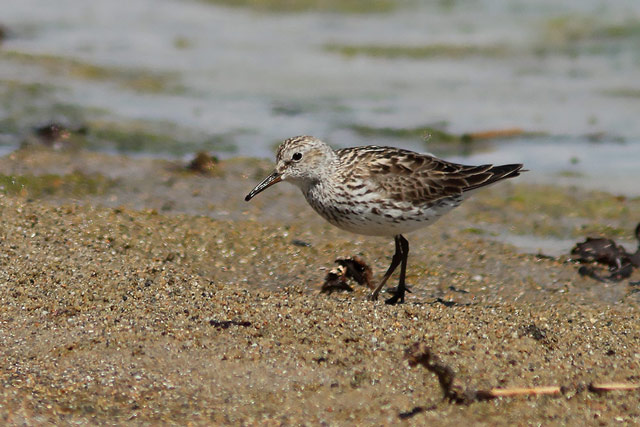 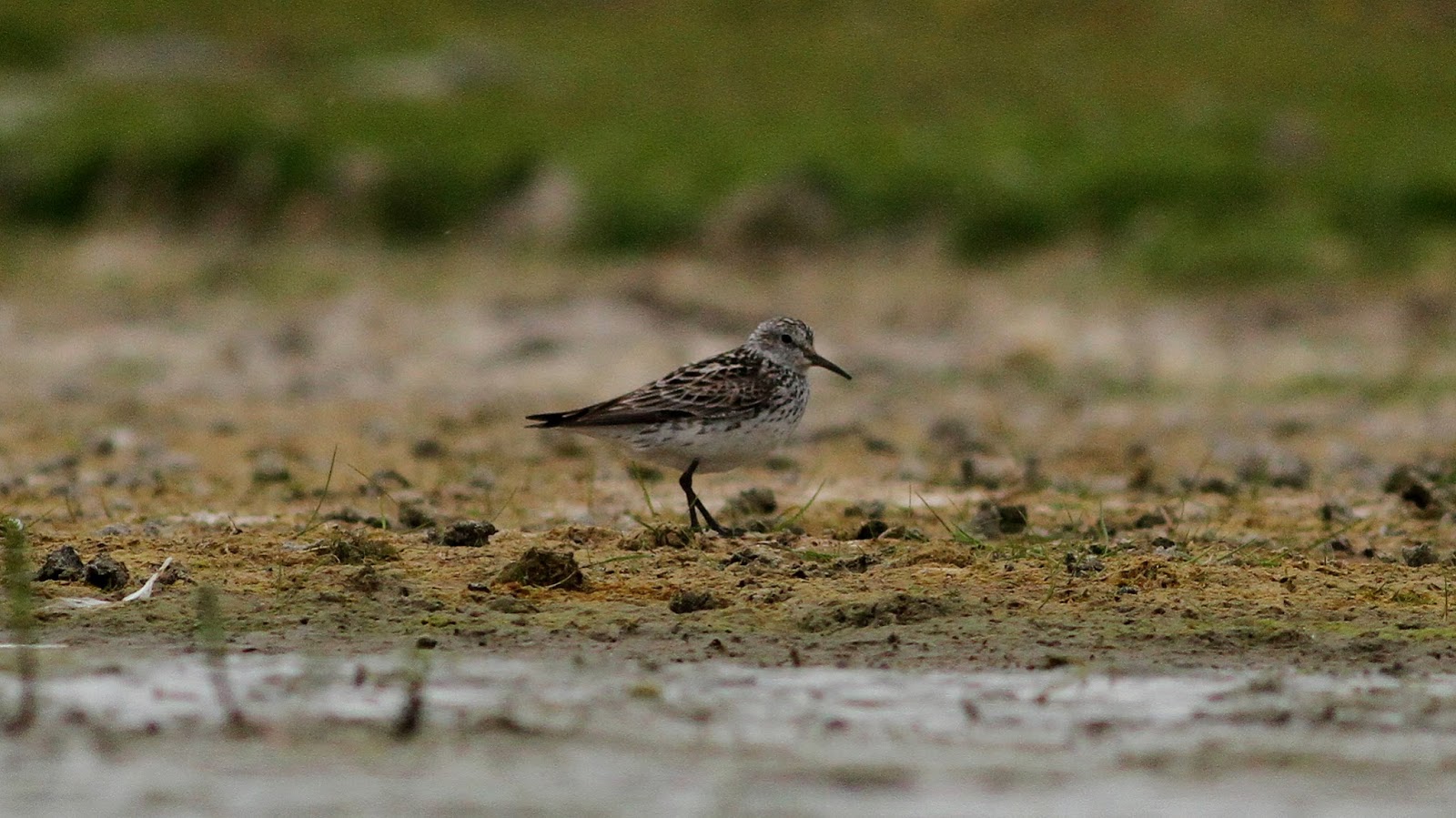 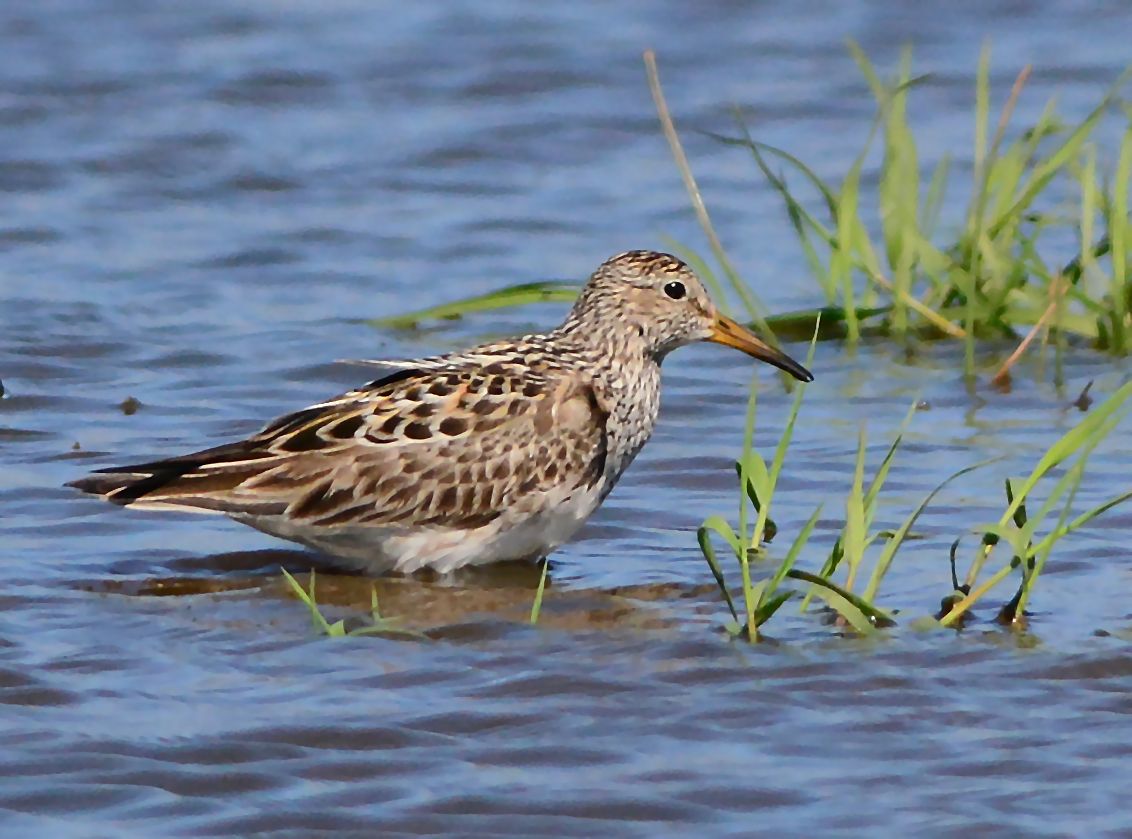 News that at least 20 Cory's Shearwaters had amassed off Round Island, Scilly, on 21st must have made Cornish seawatchers prick up their ears; there were a handful of sightings of both Cory's and Great Shearwaters from the Cornish mainland during the week, including three Greats off Mevagissey on 18th; singles of both species also flew past Strumble Head, Pembrokeshire, on 19th. In Ireland a Cory's was off Kerry Head, Co Kerry, on 17th and a Great passed Bridges of Ross, Co Clare, the same day. An adult Sabine's Gull flew past Porthgwarra, Cornwall, on 17th.

The drake Lesser Scaup continued on Blagdon Lake, Somerset, as did the female American Wigeon on Rigifa Pool, Aberdeenshire, which was still present on 17th. The drake King Eider was again off Nairn to at least 19th, while late news was received of another male off North Rona, Outer Hebrides, on 22 June. One drake Surf Scoter became two at Lunan Bay, Angus & Dundee, on 18th, and the young male continued off the Aberdeenshire coastline. What are presumably last week's triumvirate of Ruddy Shelduck, last seen in Staffordshire, were at Aldcliffe Marshes, Lancs, from 17–20th, while two were at Dungeness, Kent, on 17th and another two lingered at Pitsford Reservoir, Northants, from 19th. 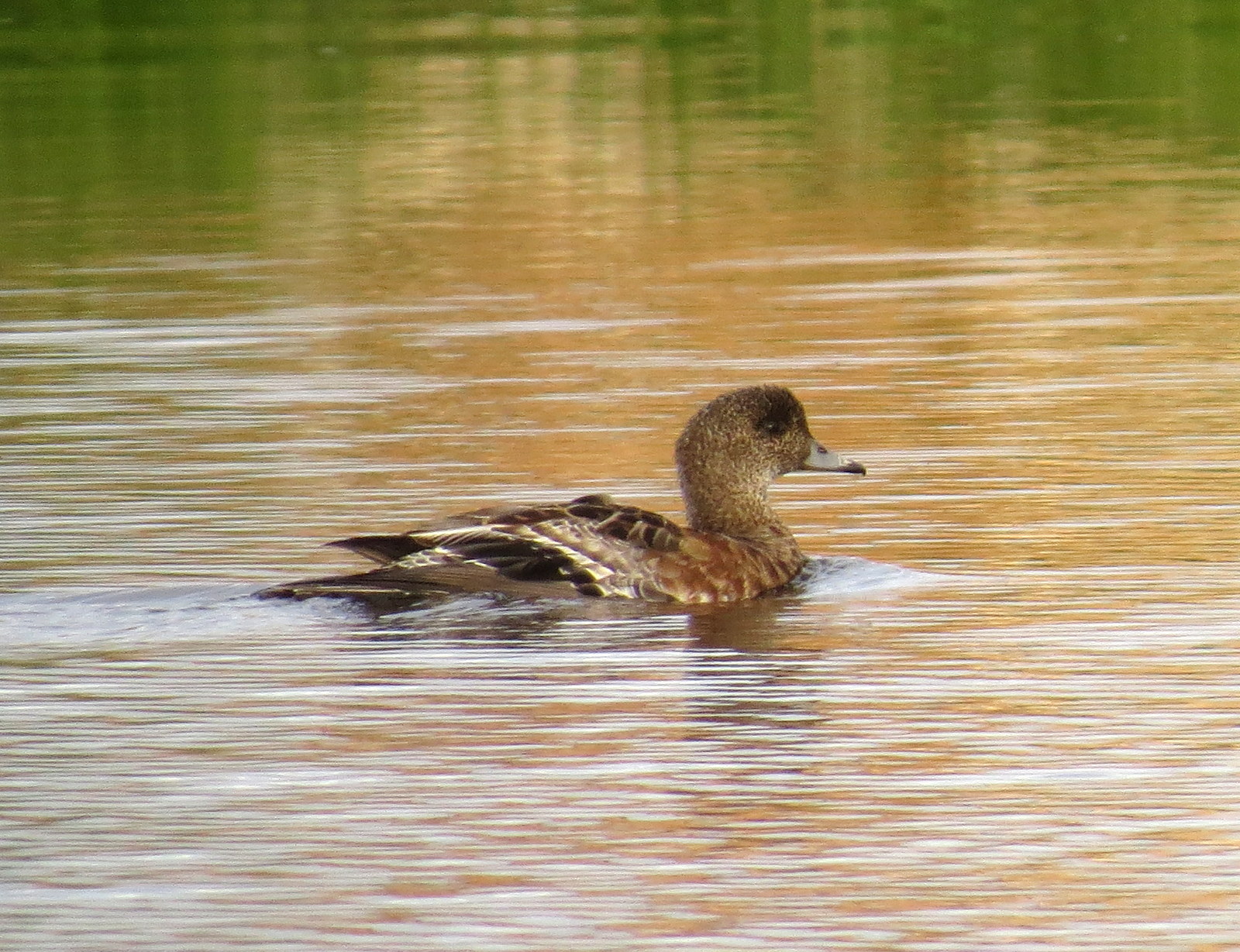 Last week's Purple Heron was still at King's Fleet, Suffolk, to 21st but could be quite intermittent in its appearances. Similarly, the Little Bittern at Old Moor, S Yorks, was irregular to say the least, showing on 16th and again on 19–20th. There was also a report that suggested the Lakenheath male had been seen 'recently', but with no indication as to date. Adult Night Herons were at St Erth, Cornwall, on 15th and Ryton on Dunsmore, Warks, from 17–19th. Great White Egrets were again quite widely spread, with a bird as far north and west as Lough Beg, Co Antrim, on 19–20th. 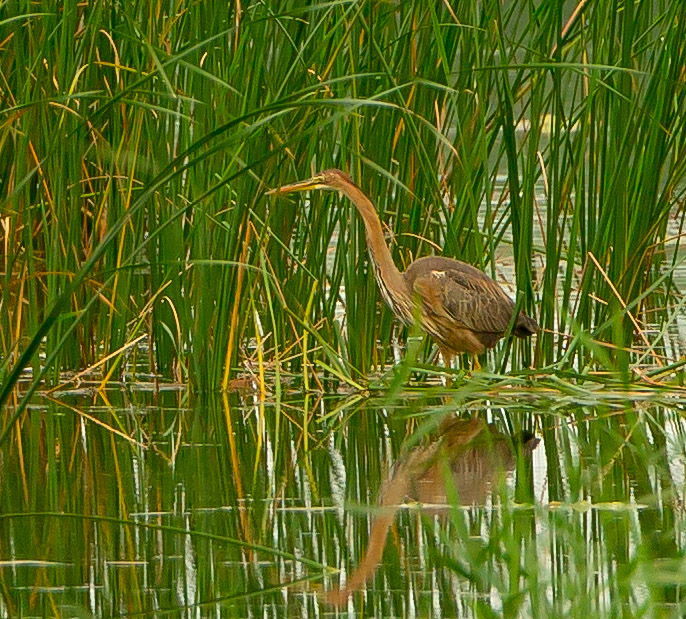 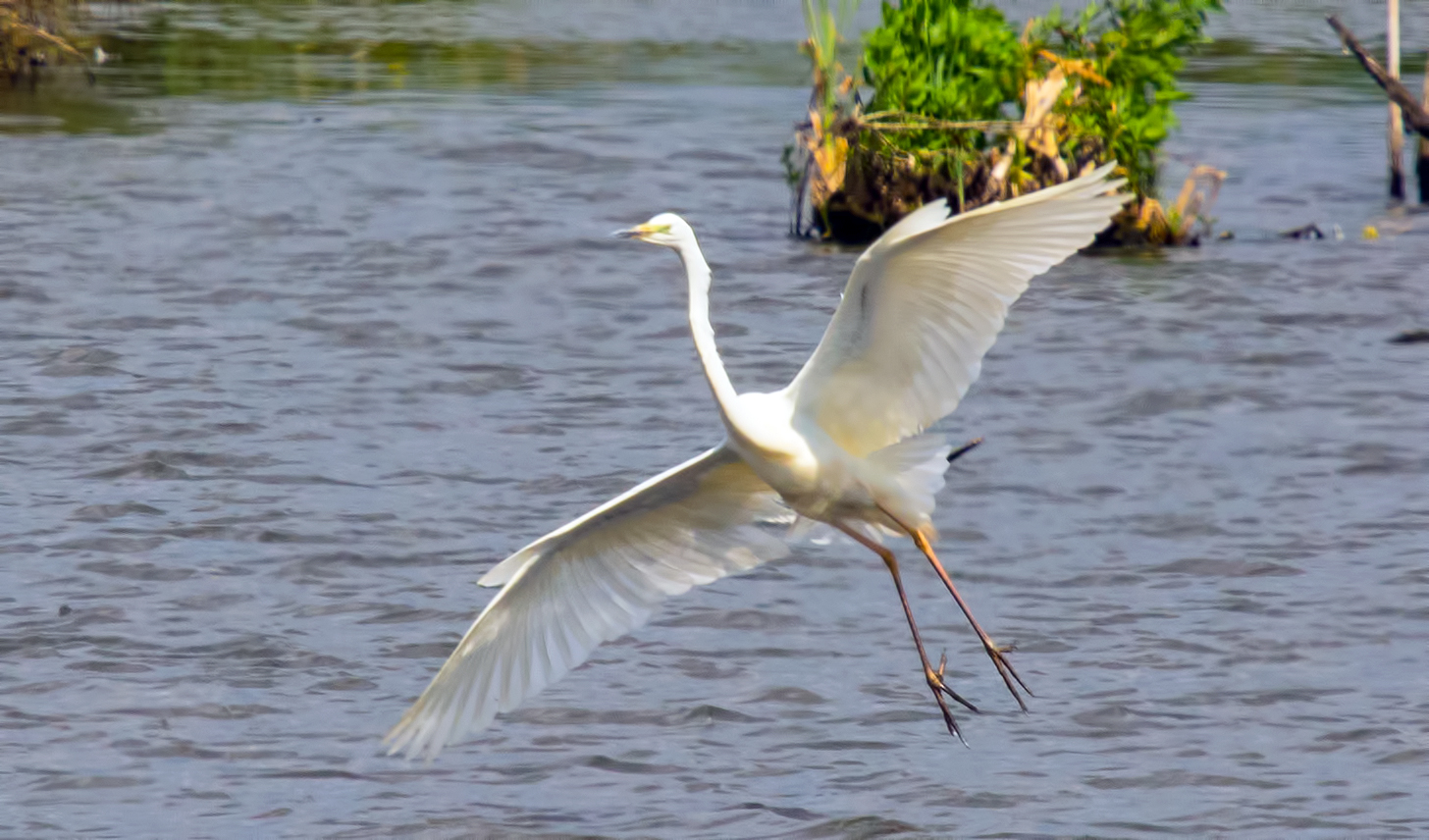 The Red-footed Falcon was still performing well at Chatterley Whitfield, Staffs, throughout the week, though it was reportedly the subject of an attempted capture by two unknown individuals driving a white Ford Transit late on 20th. If true, this is evidently a worrying development and anyone visiting the bird over the coming days is encouraged to report any suspicious activity to the police. In Suffolk a Black Kite flew over Bawdsey and later Witnesham on 21st, while across in Co Donegal, a Snowy Owl was seen on Arranmore Island on 19th. 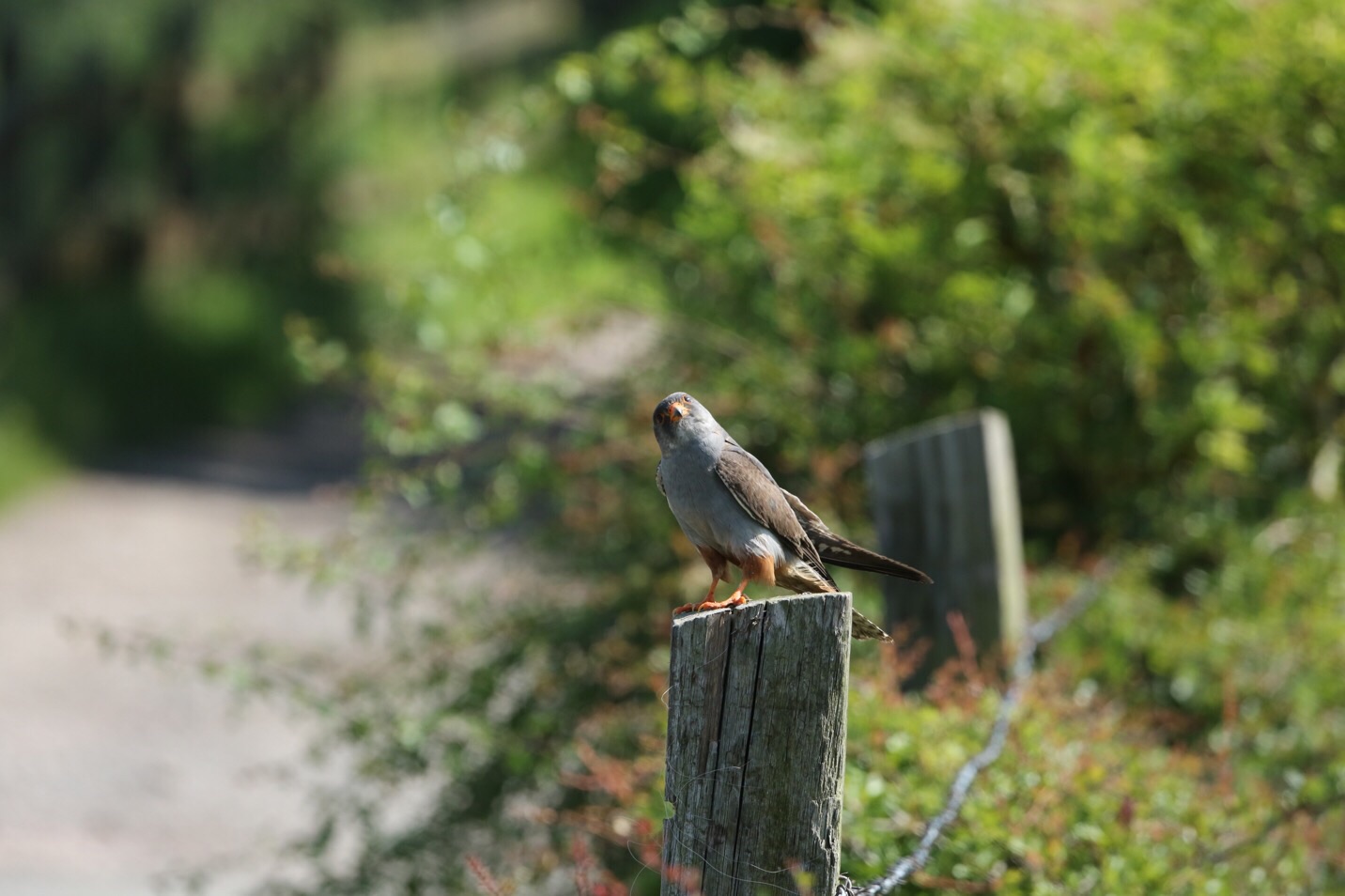 The summering Ring-billed Gulls remained in situ on the Hayle Estuary, Cornwall, and Tralee, Co Kerry, while the first returning adult was back at Nimmo's Pier, Co Galway, on 17th — more or less right on cue. The adult Bonaparte's Gull put in another week on the Oare Marshes, Kent, while the first juvenile Caspian Gull of the season was near Roos, E Yorks, on 21st. Yellow-legged Gull numbers continue to swell with juveniles now widespread and a solid count of c.60 from Stanwick Pits, Northants, on 20th usurped by 92+ there the following day.

The Devon Gull-billed Tern was last noted at Kingsteignton on 17th and another flew past Chapel Point, Lincs, on 16th — perhaps the bird seen at Cley last week? A White-winged Black Tern at Dungeness, Kent, on 18th was at Stanwick Pits, Northants, early the following morning before ending up at Rutland Water on Sunday afternoon. 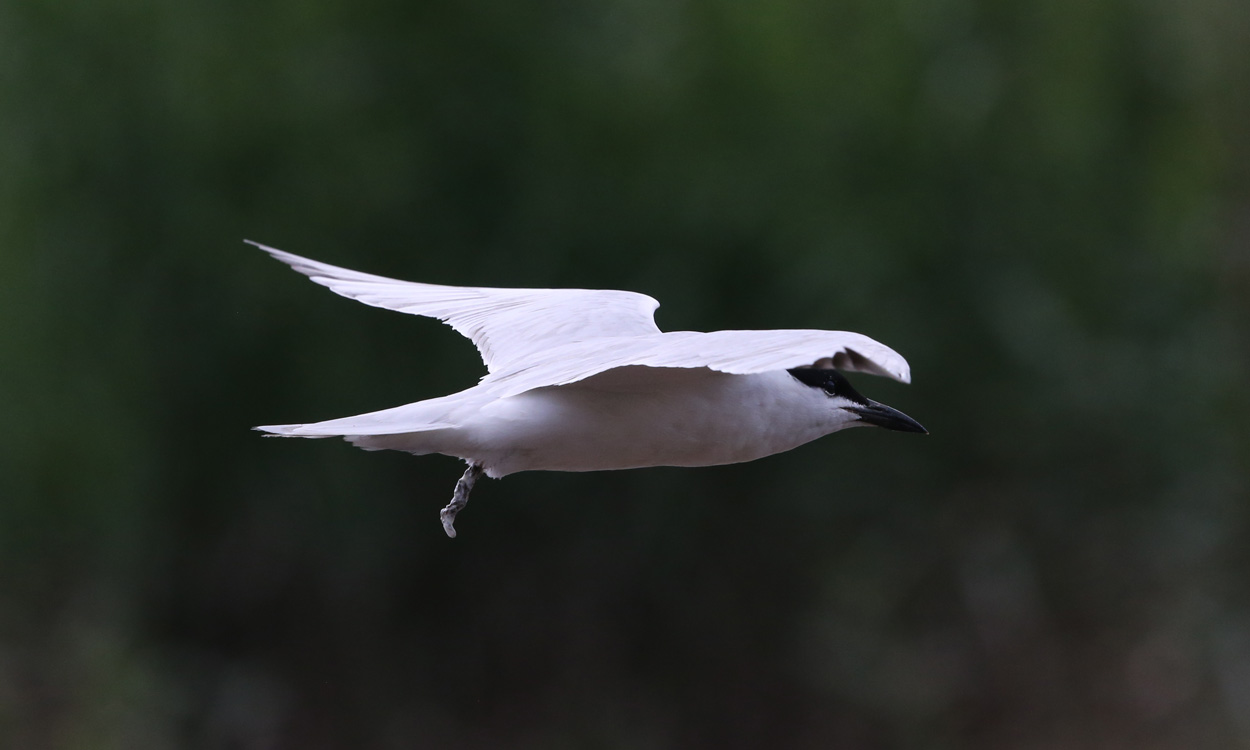 A European Bee-eater at Portland, Dorset, was followed by two there on 19th; two were over Hope's Nose, Devon, on 16th, with another couple inland at Polesworth, Warks, on 18th and a further pair flying south at Frinton on Sea, Essex, on 21st. The bird on North Ronaldsay, Orkney, on 18th was presumably that on Sanday the following day, and there was a record from Jersey on 19th. A Golden Oriole singing at Woodland Lakes near Carlton Miniott, N Yorks, from 20th was a mid-summer surprise and a rare bird so far north.

While most birders tend to switch off a little throughout the mid-summer months, Fair Isle provided a stark reminder of why vigilance is always necessary on the island, even at the sleepiest time of year for migrants. A Marsh Warbler was found on 15th and was followed by a Common Rosefinch on 20th and an early Icterine Warbler on 21st. The first European Serin report for a few weeks concerned a bird at Spurn, E Yorks, on 16th, and there was another Rose-coloured Starling record from Lewis — a bird on feeders at South Dell on 18th. 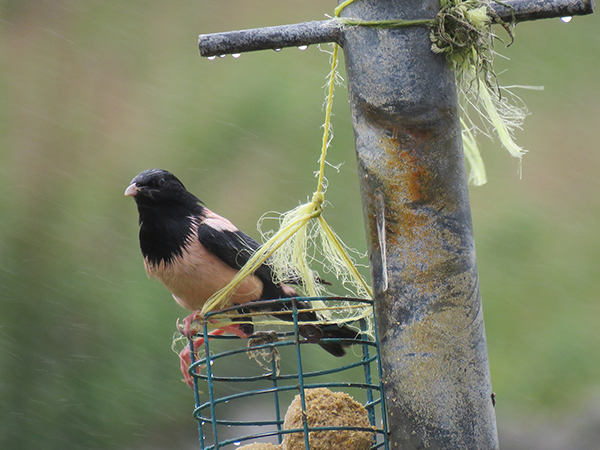 The first Pink-backed Pelican to be seen in Israel since 2000, an immature in the Harod Valley, was very well received locally. It was originally found in slightly bizarre circumstances: the video below, with its soothing acoustic soundtrack, was initially posted on YouTube labelled as 'White Pelican', before a sharp-eyed Israeli birder noticed the bird's plumage and small size and made a rapid reidentification. Detective work quickly revealed the location at which the video was shot and the date on which it was taken, 9 July. Fortunately for Israeli birders, it was still present in the same place on 21st!

A smart drake Stejneger's Scoter was found in the bay near Fauske in the Norwegian county of Nordland on 15th, with the recent female still at Nesseby, Finnmark, that day. The drake lingered at Fauske until the week's end and was at times affording very good views close to shore. 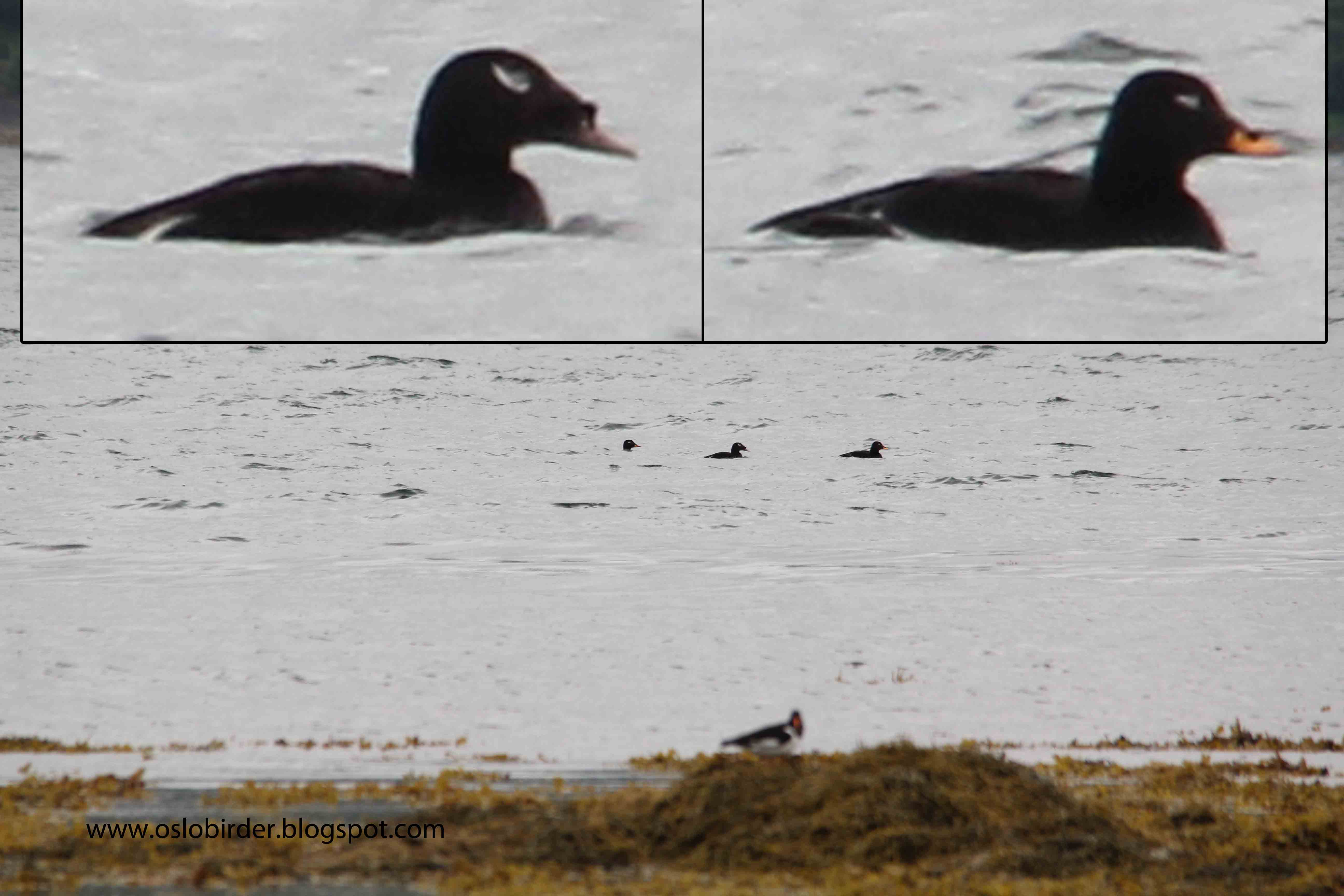 After its appearance in Suffolk last week, the Black-browed Albatross was back in Denmark on 16th, when it was noted flying south past Esbjerg. Two different Greater Sand Plovers were noted in Germany this week, one in Schleswig-Holstein and the other at a sugar factory well inland in Niedersachsen, while Italy's first White-rumped Swift was an excellent discovery at Capo Murro di Porco, in south-eastern Sicily, on 21st.

Southern Migrant Hawker dragonflies are now showing at Wat Tyler Country Park, Essex, with at least two seen and photographed on 21st. Visitors are asked to strictly keep to paths and boardwalks at this site and avoid trampling any surrounding pond vegetation, as the park is an SSSI — such trampling occurred in 2013 and caused considerable problems (more info here). As an aside, it is well worth keeping an eye out for this species in the coming days and weeks — and any sightings, either at Wat Tyler or elsewhere, should be sent to Neil Phillips. 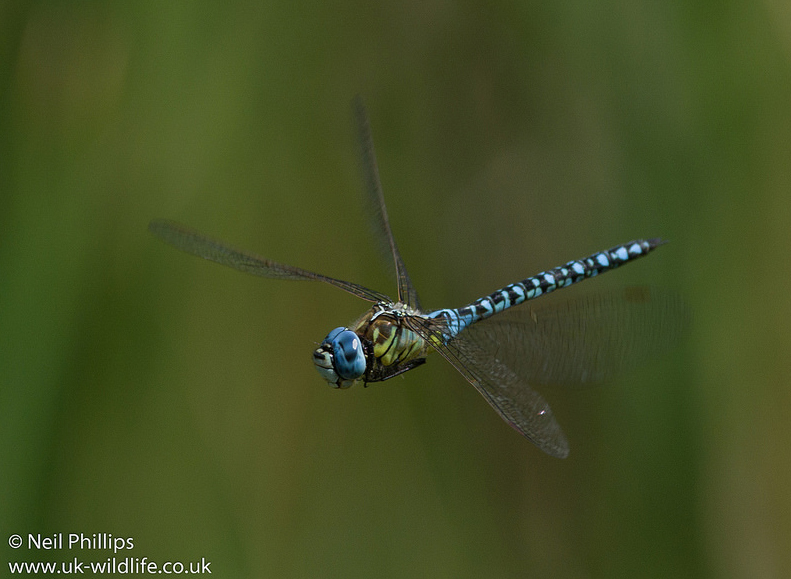 While the recent flurry of rare migrant moths has subsided to a low ebb, a Large Tortoiseshell on buddleia at Lighthouse Down, St Margaret's Bay, Kent, on 21st was a good record. It's also well worth looking out for Scarce Tortoiseshells, which could easily be arriving now.