The biggest excitement of the review period came towards the end of the final day. A ringed orange-billed tern on – fittingly – Tern Island in Pagham Harbour, West Sussex, on 19th was widely assumed to be the returning adult Elegant Tern from 2017, until a photo posted online showed it to be a Royal Tern.

Looking like a second-summer bird with a metal ring on its right leg, it seems all but certain to be the long-staying Channel Islands individual, first seen on Guernsey on 5 February 2017 (read the finder’s account here). Finally making its long-awaited first appearance in mainland Britain, it is set to prove exceedingly popular over the following days and weeks if it does prove twitchable. This is the first British record since an adult in Gwynedd in 2009, and only the sixth record overall. 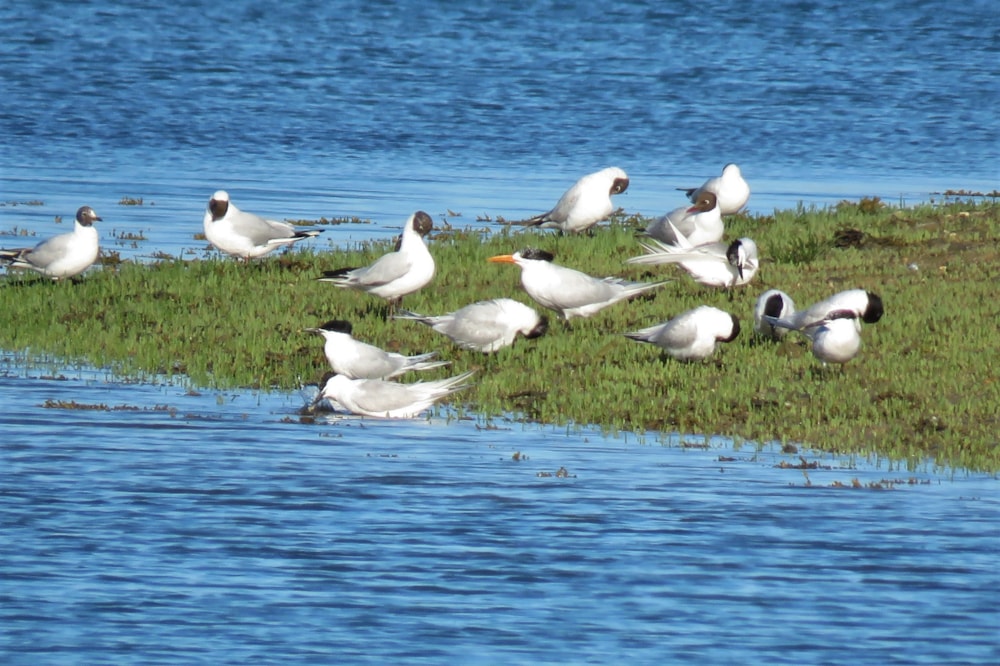 The popularity of this particular individual will only be boosted by its assignment to subspecies level as American Royal Tern (subspecies maxima). Research published in spring 2017 suggests that the American and West African forms of Royal Tern represent two distinct species, with DNA analysis indicating that African Royal Tern is more closely related to Lesser Crested Tern than to its American congener.

Although inseparable in the field on current knowledge, American Royal Tern is on average slightly bigger with a slightly redder bill. There is only one other previously accepted record of American Royal Tern in Britain: a first-winter at Kenfig NNR, Glamorgan, in 1979 that was ringed as a nestling in North Carolina, USA.

An oddity to grace the news pages this week was an incredibly well-travelled Pied Crow. After heading south through the Spurn bottleneck, East Yorkshire, and Gibraltar Point, Lincolnshire, on 13th, it reappeared in Norfolk in the vicinity of Great Yarmouth’s racecourse from 15-17th, after which it flew north over Winterton-on-Sea on 18th, and then reappeared around a Cromer chip shop on 19th. Not content with its lot, it moved the short distance to East Runton the same evening. 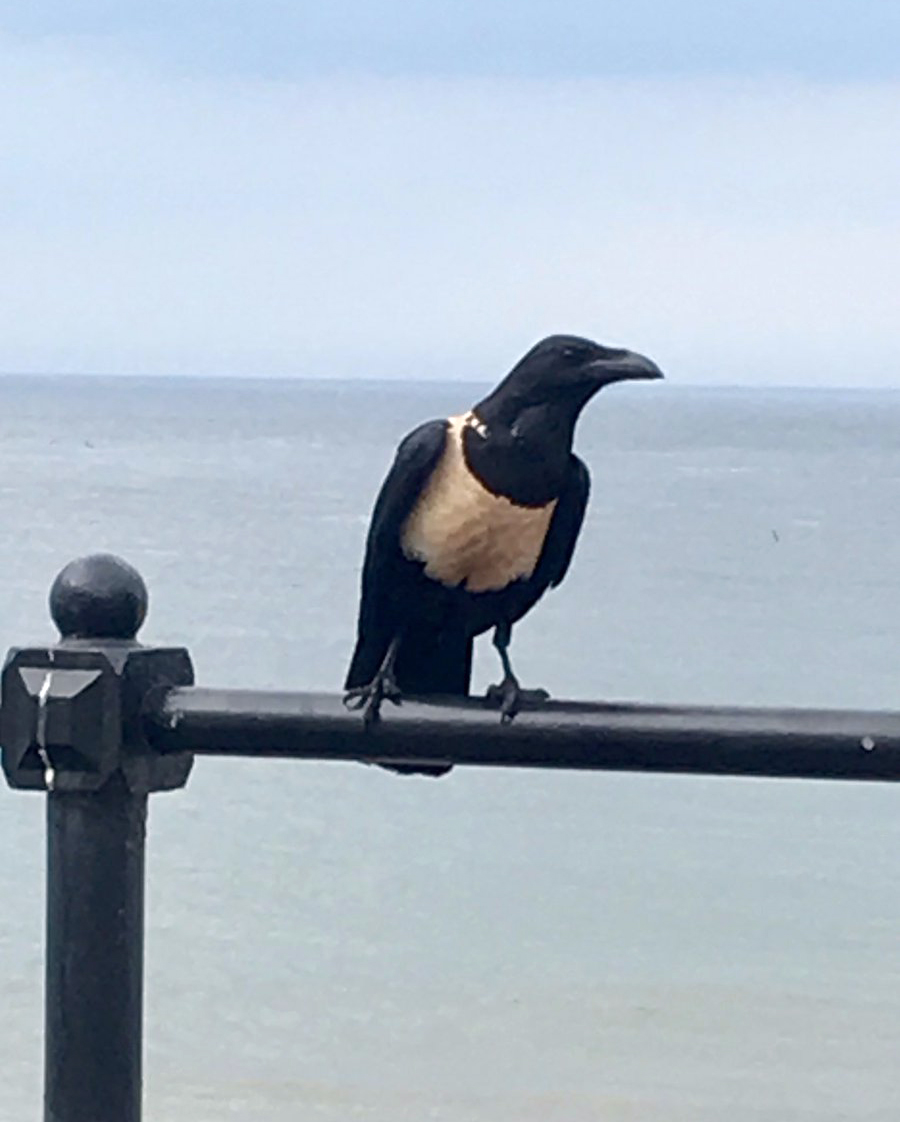 A sub-Saharan resident, Pied Crow has a chequered and controversial history in the Western Palearctic. A number of Moroccan occurrences are considered genuine, as is a sprinkling of other North African records from northern Mauritania to Egypt; most recently, a pair was seen a couple of months ago on the Italian island of Lampedusa. These show a considerable northward movement of almost 1,000 miles from the species’ usual range. Despite this, all Iberian records have been controversially assumed to be escapes – including birds seen crossing the Strait of Gibraltar.

It seems an unlikely natural vagrant to Britain and the likelihood of ship assistance must be considered. There are currently three birds in residence near Puerto de la Luz on Gran Canaria, Canary Islands, which arrived on a mobile oil rig that had been moored off the Mauritanian coast. Despite multiple records of ship-assisted birds elsewhere in the world, including several Brazilian records, the species is also commonly kept in captivity.

Several previous British records have been successfully traced back to their owners, including one at Start Point, Devon, in 2006 that had escaped from a nearby aviary. The last Yorkshire record, a bird that appeared at Flamborough on 8 May 1999 before working its way south though Spurn, also attracted attention from would-be twitchers until another turned up in Derbyshire on 26 May, and it was established that two had escaped from a wildlife rescue centre in Nottinghamshire. 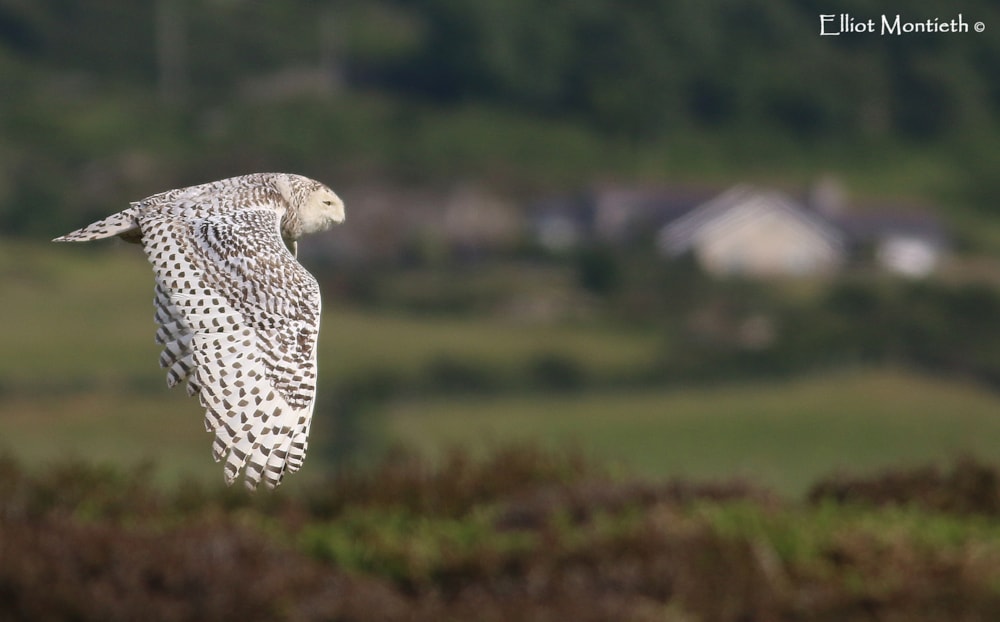 Friday 15th saw the rediscovery of the Welsh Snowy Owl on Anglesey near Port Lynas, but it had seemingly returned to Hogwarts by 16th as extensive searches of the area yielded little reward. Photo analysis seems to suggest that a single female may be responsible for most, if not all, sightings in Wales this year. The St Kilda female was still on Hirta on 17th.

A sprinkling of new rarities included a Great Reed Warbler at Fen Drayton Lakes RSPB, Cambs, also discovered on 15th, and another male Black-headed Bunting, this time at Brims Ness, Highland, on 17-18th.

No fewer than 16 new Rosy Starlings sprang up during the week, encompassing all points of Britain and Ireland. They are spread as far as Helston, Cornwall, and Cape Clear, Cork, in the south-west to Gulberwick, Mainland Shetland, in the north-east, and from Valtos, Lewis, in the north-west to Hailsham, East Sussex, in the south-east. Significantly further inland than the other new arrivals was one at Spean Bridge, Highland, on 16-17th. In total 24 sites played host to 25 individuals, the flamboyant and widely admired adult at Tralee in Kerry being joined by a second from 16th. 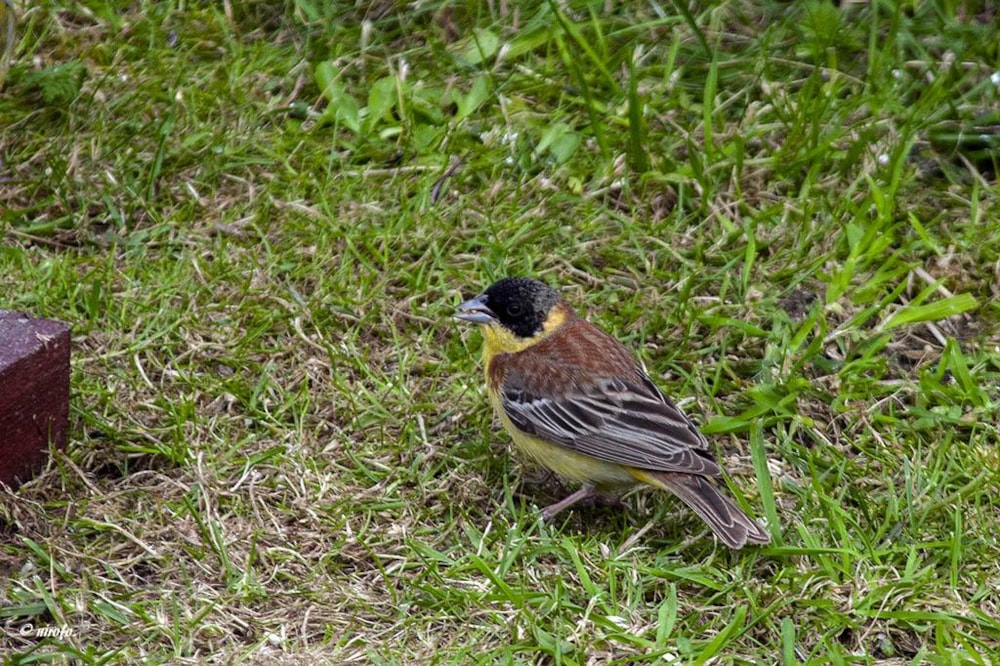 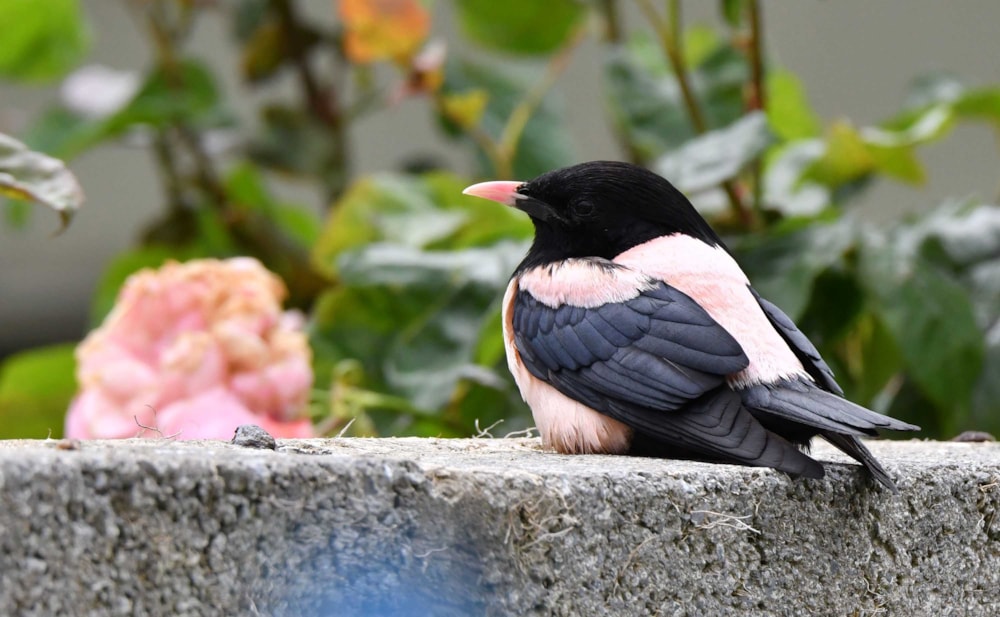 In what has been a rather slow week for expected drift passerines, a mobile European Serin on Fair Isle on 16th takes the biscuit, representing just the sixth Shetland and 10th Scottish record. Another flew south over Gibraltar Point, Lincs, on the same date. A female Red-breasted Flycatcher was trapped and ringed on North Ronaldsay, Orkney, continuing a strong run for the species this spring, while a brief singing Golden Oriole at Culverwell on Portland, Dorset, on 13th was the only one reported this week. Still singing throughout were Iberian Chiffchaffs at Hayle, Cornwall, and Thurstaston Common, Cheshire.

A female Red-backed Shrike was at Winterton Dunes, Norfolk, on 18th, while in North Yorkshire the Scaling Dam Reservoir Woodchat Shrike was still in situ until 14th. Singles of Hoopoe and Common Rosefinch were at Hesket Newmarket, Cumbria, on 18th and Hornsea Mere, East Yorkshire, on 16th respectively. On Fair Isle, Shetland, the female Eastern Subalpine Warbler was still present until at least 18th. 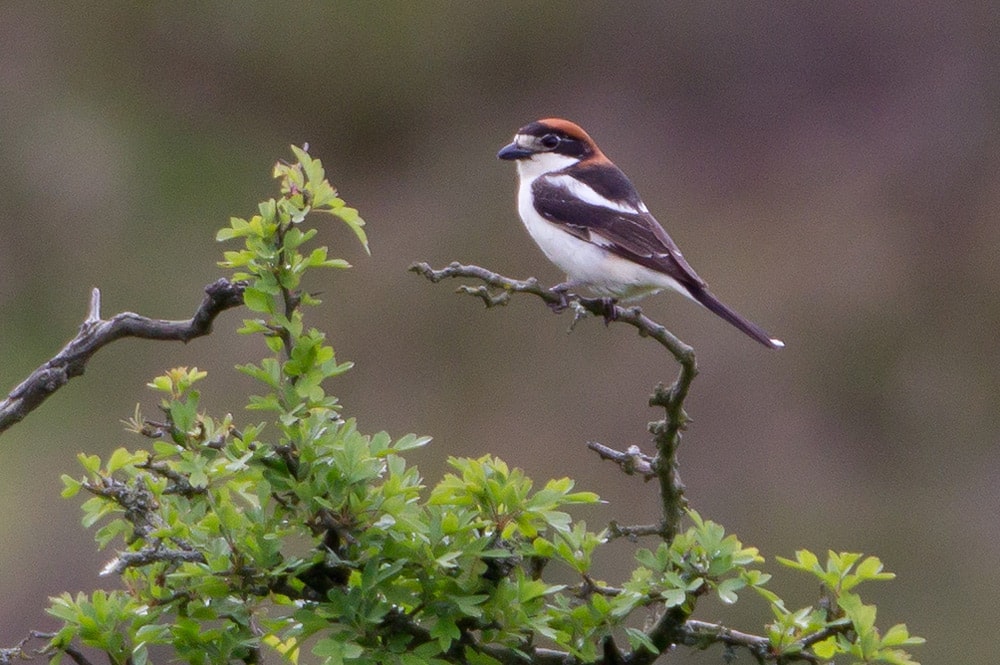 A Buff-breasted Sandpiper at Potter Heigham, Norfolk, was a nice surprise, lingering on the marshes until 15th, when it was replaced by a Black-winged Stilt from 17th. Stilts also graced scrapes at Sandwich Bay, Kent, and Ouse Washes, Cambs, from the same date. An intriguing report of a possible Baird's Sandpiper on the Gann Estuary, Pembs, on 12-13th was the best of the rest, although nothing came of it.

Black Kite records came from Suffolk, over Leiston on 14th and Bury St Edmunds on 16th, although it is always hard to tell whether birds here are genuine vagrants or the Wrentham escape on tour. Another flew over the Great Reed Warbler at Fen Drayton, Cambs, on 19th, and a probable was reported on Coll, Argyll, on 15th.

A popular addition to the county’s avifauna, the West Yorkshire breeding Eurasian Spoonbill viewpoint has been a hit with visitors. This week saw the arrival of three baby (tea)spoons, footage of which has kept our news team well entertained. The only Glossy Ibis of the week concerned the well-habituated first-summer at Druridge Pools. Although less impressive than they might have been considered in years gone by, five Great Egrets at Hickling Broad, Norfolk, on 17th was nevertheless a relatively notable number.

Unsurprisingly, the Pied-billed Grebe remained at Loch Feorlin, Argyll (as he has for more than four years now), and so too did the drake King Eider on the Ythan Estuary, Aberdeens. The ‘Queen Eider’ made a reappearance on the final day of the review period, cropping up back at Aber Dysynni, Gwynedd, with a flock of moulting Common Eider on Broad Water. 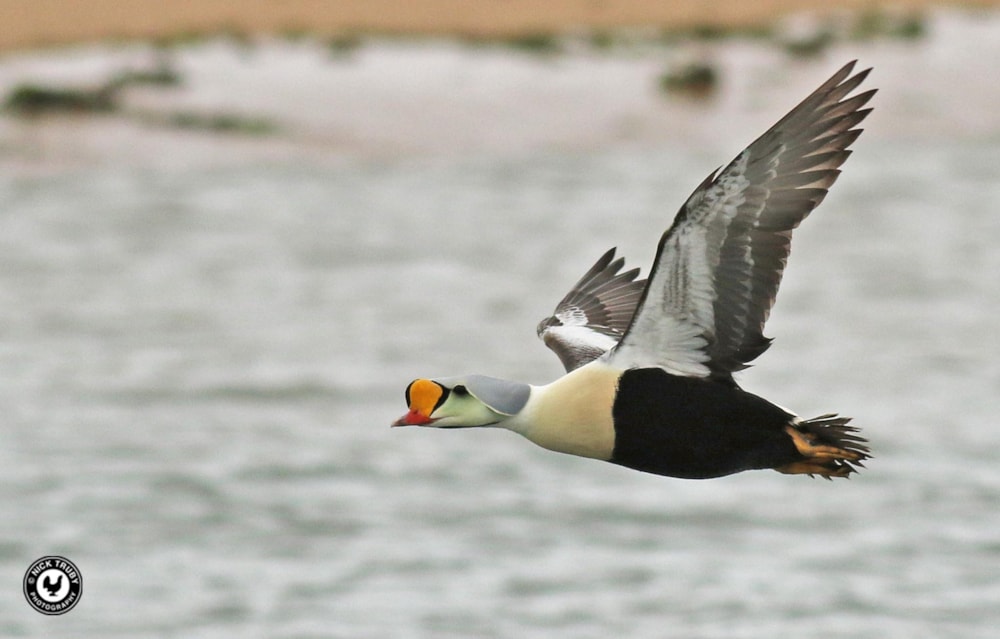 A fresh, if not attractive, eclipse drake American Wigeon was seen at Lough Beg, Londonderry, on 18th, while the regular Northumberland drake remained at Grindon Lough. Still around, at least at the start of the week, was the Islay Ring-necked Duck, while the rather out of place white-morph Snow Goose on Shetland was still pottering round a Grutness beach on 17th. The drake American Black Duck in Highland was still along the River Strontian, as were at least six of his progeny from previous years. In what can only be described as akin to an episode of Duck Dynasty, the boy himself seems rather smitten and has paired up with one of his own offspring.

A good omen for the coming seawatching season off Ireland and in the South-West Approaches is the strong run of early Wilson's Storm Petrels; one off Porthgwarra, Cornwall, on 17th was perhaps the most promising sign so far. One flew past Bridges of Ross, Co Clare, on 14th, complete with three Sabine's Gulls, with two individuals from Scilly pelagics on 14th and 18th. Single Cory's Shearwaters passed Lizard Point, Cornwall, and Selsey Bill, West Sussex, while no fewer than eight Pomarine Skuas were noted. 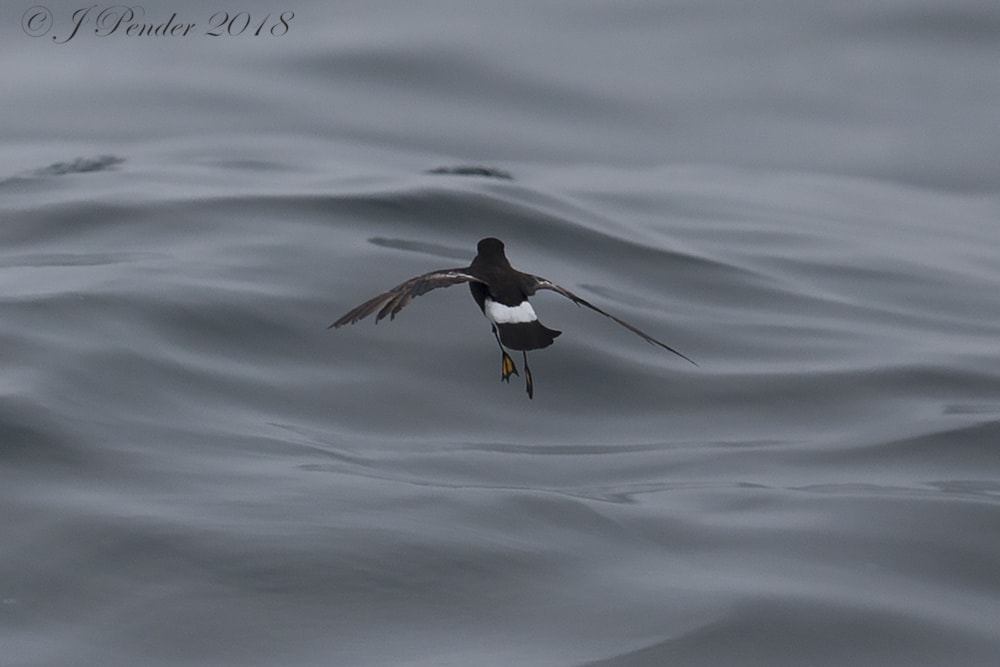 A second-summer Laughing Gull past Lizard Point, Cornwall, on 14th was the cherry on the Laridae pie this week, while the returning adult Bonaparte's Gull showed delightfully to all-comers at Oare Marshes, Kent, throughout. On Shetland the first-summer Ring-billed Gull resurfaced at Loch of Hillwell on 16th.

In non-avian news, a Scarce Tortoiseshell was well photographed near Stoke Goldington, in Bucks, on 16th, although the exact location was withheld. This is the first appearance of this mega vagrant to Britain since the 2014 irruption. Much like the pattern four years ago, following a population explosion in their native Ukraine, small numbers have started to appear in continental western Europe, with this the first of the interlopers making it over the Channel. Interestingly, the rapid range expansion of Marbled Fritillary in recent years has led to several of these accompanying the Scarce Torts on the Dutch coast – a potential British first to watch out for this summer?

In Germany, the Sociable Lapwing found late last week was still in situ, while the swan-loving Black-browed Albatross was still to be found on Sylt on 19th. Other long-stayers include the Semipalmated Plover lingering on Tenerife on 13th and Dwarf Bittern still on Fuerteventura on 14th. A Great Knot was found on Terschelling, The Netherlands, on 16th and a Greater Spotted Eagle flew west through Belgium on 14th. Getting in on the Rosy Starling action was Cape Verde, with one on the island of Sal on 13th. An Eleonora's Falcon present briefly at Jahra Pools, Kuwait, on 15th was a national first, while a Black-winged Kite at Ostrów Mazowiecka on 16th was just the third Polish record.