East Chevington in Northumberland would appear to be the 'site of the week'. A Terek Sandpiper was present there for much of the day on the 12th. Despite the increasing regularity of sightings, Terek Sandpipers remain quality birds and are high on the 'want to find' list of most wader buffs. With sightings at several sites along the east coast in June during the past few years, could this perhaps be the same bird that is picked up each year? A Pectoral Sandpiper was also present briefly at the same site on the 12th and the White-winged Black Tern remained to the 17th.

Elsewhere, a male Black-headed Bunting was on Skomer (Pembrokeshire) on the 16th; a typical date at a typical west coast location. An Acrocephalus warbler at Fisher's Green NR on 16th was originally identified as a Marsh Warbler, but was later thought to be a Blyth's Reed Warbler. If accepted as the latter it will be quite an exceptional record – how many more pass undetected? A Marsh Warbler at Kelling Water Meadows (Norfolk) from 12th onwards was quite obliging at times. Elsewhere, a Subalpine Warbler was trapped at Portland (Dorset) on 15th, a Woodchat Shrike was reported near Penrith (Cumbria) on 13th and a Melodious Warbler was present on Foula (Shetland) from 12th-15th, after being ringed at Sanday (Orkney) on 11th. In Norfolk the Short-toed Lark was seen at Blakeney Point to the 14th, and was presumably the bird at Cley on 13th. A grey shrike was an unseasonable find at Ballaghennie Ayre (Isle of Man) from 17th onwards, and subsequent debate pointed towards the bird being a Steppe Grey Shrike.


More Rose-coloured Starlings were found during the week: St. Mary's (Scilly), 12th-15th; Portstewart (Londonderry) 12th-13th; Calf of Man (Isle of Man) 13th; Rhum (Highland) 14th; Old Felixstowe (Suffolk) 14th; Minsmere (Suffolk) 15th and; Islay (Argyll) 16th. Five Bee-eaters were reported, all on Scilly/Cornwall except one through Spurn (E. Yorks). Half a dozen Common Rosefinches included the popular bird at Scarborough which was last seen on the 14th and a Red-backed Shrike was reported inland in North Yorkshire. At least 27 Quail were heard during the week, with three on Foula (Shetland) and 3 at Glanford (Norfolk). Raptors included Red-footed Falcons in Kent and Norfolk, though none lingered and four reports of Black Kites, including a bird in Highland.

The Wilson's Petrel 'season' off the Isles of Scilly commenced with two birds 8 miles south of St. Mary's on the 12th. The trips into Scillonian waters must represent the best opportunity for seeing this species in northwestern Europe, with sightings here likely to be just the tip of the iceberg. A Whiskered Tern was at Tophill Low Reservoirs (E. Yorks) briefly on the 14th and was presumably the bird at Hallcroft GP (Notts) from 15th onwards. There were three reports of possible Squacco Herons during the week, though none could be relocated, a Night Heron was on South Uist (Outer Hebrides) and the Purple Heron was seen again at Ham Wall RSPB in Somerset. In Northumberland the Great White Egret remained at Longhirst Flash to the 13th, with another at Gladhouse Reservoir (Lothian) on 13th and one over the Oare Marshes (Kent) on 17th. A selection of rare ducks included a drake Blue-winged Teal from the 15th near Icklesham (East Sussex), and three King Eiders in Scotland, with drakes at Stevenston Point (Ayr) and Toward Point (Argyll) and the female still at Aberlady Bay (Lothian). In Cumbria the Lesser Scaup is still at Longtown and Ring-necked Ducks were in Somerset, Kent and Fife. 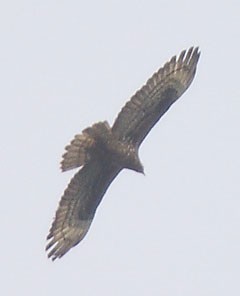