Bar the far north and west, warm and dry conditions continued to dominate throughout this week and the settled picture was reflected in the week's bird news, which generally concerned established, long-staying rarities still on offer.

One exception to this was the arrival of an adult Stilt Sandpiper at Alkborough Flats, Lincolnshire, on 15th. After June's Baird's Sandpiper at the same site, this was further confirmation that Alkborough is one of the premier wader sites in north-east England – 44 species have now been recorded there. It is just the second Stilt Sand for Lincolnshire, following the well-watched adult at Frampton Marsh RSPB in August 2018. 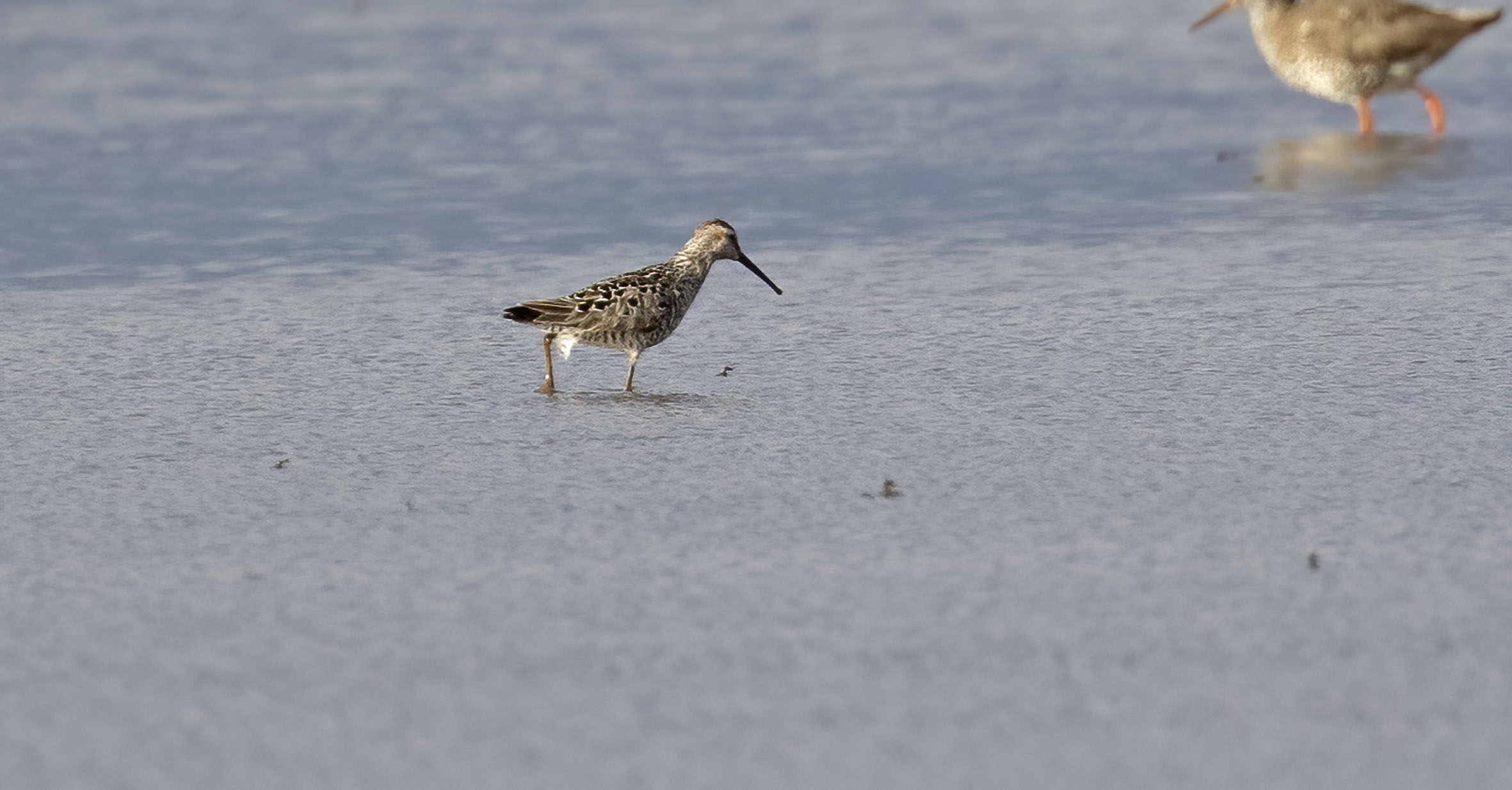 On the East Yorkshire coast, both the Red-tailed Shrike and Black-browed Albatross were relatively reliable in the Bempton Cliffs area throughout the week. With the former now in heavy moult, it could be due for an extended stay – and of course the albatross lingered until late September last year. Across the Irish Sea, the Least Tern again made appearances at Portrane, Co Dublin, on 14th and 17th, while the Co Wexford Elegant Tern was noted again at Lady's Island Lake on 11th. After the pulse of Cory's Shearwaters at the end of June, the seawatching season has stalled somewhat – just three Cory's were seen in the South-West Approaches this week and the only Long-tailed Skua was an adult off Dysart, Fife, on 17th. Wildfowl too were scantily represented, although Ruddy Shelduck at a dozen sites were perhaps a hint of more to come over the coming weeks. Needless to say, the Pied-billed Grebe stuck out another seven days at Loch Feorlin, Argyll.

The Black-crowned Night Heron at Oare Marshes KWT, Kent, continued to give tantalising views at dusk most evenings, while the adult at Cley Marshes NWT, Norfolk, reappeared on 17th after an eight-day absence. News of a third concerned a noc-migged bird at Lissagriffin, Co Cork, on 22 June. The only Purple Heron was an adult at Nanjizal, Cornwall, between 11th and 16th. Glossy Ibises were at 10 sites as far north as Staveley YWT, North Yorkshire, with a high count of nine at Welney WWT, Norfolk. With Smithy Fen having now more or less dried up, the Cambridgeshire White Stork became more erratic and even made a brief appearance near Whittlesey on 16th before returning to Smithy the next morning. Welney also held a family of six Black-winged Stilts from 12th, with the half-dozen also still at Potteric Carr YWT throughout. The week's only American Golden Plover was at Killinick, Co Wexford, on 15th. A Kentish Plover at The Naze, Essex, on 13th was followed by another at Snettisham RSPB, Norfolk, on 15th. Snettisham also had singles of Eurasian Stone-curlew and White-rumped Sandpiper to 16th. Another White-rumped Sandpiper touched down at Pool of Virkie, Shetland, for the day on 17th. Three Pectoral Sandpipers were widely spread, with singles at Loch of Strathbeg, Aberdeenshire, from 13-16th, Dungeness RSPB, Kent, from 15th and Frodsham Marsh, Cheshire, on 17th. A single Temminck's Stint continued at Edderthorpe Flash, South Yorkshire, with others at Loch of Skene, Aberdeenshire, on 11th and Low Newton-by-the-Sea, Northumberland, on 12th. A Eurasian Stone-curlew at Cliffe Pools RSPB, Kent, was well-twitched on 16-17th.

A smart Lesser Yellowlegs was at Normandy Marsh, Hampshire, from 13th, initially causing some head-scratching with regard to the ID. Some felt the bird better matched Greater Yellowlegs, but the bird showed a number of structural and plumage clues as to its identity. Structurally, the bill was straight and narrow, with an attenuated rear end and an overall relatively feel overall (Greater can often look quite 'gangly'). While the flanks were noticeably barred, this isn't unusual in worn breeding-plumage Lesser and the sharp contrast between the well-marked breast and clean white belly is also pro-Lesser – such well-marked breeding-plumage Greater usually have at least some dark streaking or mottling extending down the breast and onto the belly, as well as showing more on the lower flanks and around the vent, creating the impression having 'muckier' underparts. As some images showed, the bird was also clearly smaller and slighter than nearby Common Redshanks and Greenshanks. Of course, all of this was much easier to see and appreciate when closer images came out later in the week. Kent's Bonaparte's Gull was reported daily from Oare Marshes, while the first-summer Ring-billed Gull was still along the coast near Lahinch, Co Clare. The Sabine's Gull was noted at Jenny Brown's Point, Lancashire, to 14th, with another flying over Scousburgh, Shetland, on 15th. The second juvenile Caspian Gull of the season was noted at Cromer, Norfolk, with another inland at Tanholt, Cambridgeshire; there was also a noticeable arrival of juvenile Yellow-legged Gulls for the first time this year.

The bountiful summer for Caspian Tern continues, with the latest report coming from an undisclosed Highland locality on 16th. Two hung around at sites in the Saltholme RSPB area, with reports from Ripon, North Yorkshire, and Cresswell Pond, Northumberland, potentially involving these birds. Another was again at Hickling Broad NWT, Norfolk, on 12th, with a bird on the River Severn near Epney, Gloucestershire, from 7th (and presumably this bird over West Pill, Gwent, on 14th). Finally, one was around Christchurch Harbour, Dorset, from 13th, paying a visit to Brownsea Island NT, Dorset, on 14th. Black Terns were at three sites, with the first juvenile of the summer at Minsmere RSPB, Suffolk, from 11th and three at Foxcote Reservoir, Buckinghamshire, on 15th. There were reports of Black Kites from Waterbeach, Cambs, on 11th and both Hartland Point, Devon, and Predannack Airfield, Cornwall, on 12th. It feels like it's been a good year for European Honey Buzzards and extralimital birds were reported between Cornwall and Kent (the latter involving one in off the sea at Samphire Hoe CP on 17th) and as far north as Northumberland, with regular birds still at Wykeham Forest, North Yorkshire, and Swanton Novers, Norfolk.

A Hoopoe was near Cocking, West Sussex, on 13th only, while at least six European Bee-eaters remained at the breeding site near Trimingham, Norfolk. In Ceredigion, the male Rosy Starling hung on at Llangwyryfon. Another roved around the Spurn area of East Yorkshire, with a third on South Uist at Pollacher. A male Woodchat Shrike on Skomer, Pembrokeshire, was a little spontaneous on 12th, while a male Red-backed Shrike was near Brodsworth, South Yorkshire, on 11th. A Common Rosefinch proved a fleeting visitor to Gibraltar Point NNR on 14th. A male Yellow-browed Bunting was a stunning find near Berlevåg in Finnmark, Norway, on 12th. Meanwhile, in Finnish Lapland, a Desert Wheatear was at Aronperä on 15th.

France's Bridled Tern continued at Île aux Moutons, while at least five Elegant Terns were at large in the country. A White-rumped Swift was at Minerve, north-west of Narbonne, while the species has also been found breeding on Corsica for the first time.

Italy's third White-rumped Sandpiper was at Sabaudia on 13-14th. The Greater Sand Plover lingered in inland Germany at Uttershausen.