Review of the Week: 1-7 August

The adult Sooty Tern entered the week by venturing north to Loch of Strathbeg RSPB, Aberdeens, on 1st before making its way back down the coast to rocks off Buchanhaven that evening. Unsurprisingly, it had reverted to its favoured base of the Ythan Estuary from 2-5th. However, in hindsight its foray might have hinted that a final departure was nigh. Searches towards the end of the week were fruitless, but we'll just have to wait and see whether it crops up again, with many hoping it will stop off further south! While the tern was on leave, a Marsh Sandpiper was discovered on the Ythan on 1st, but soon vanished. 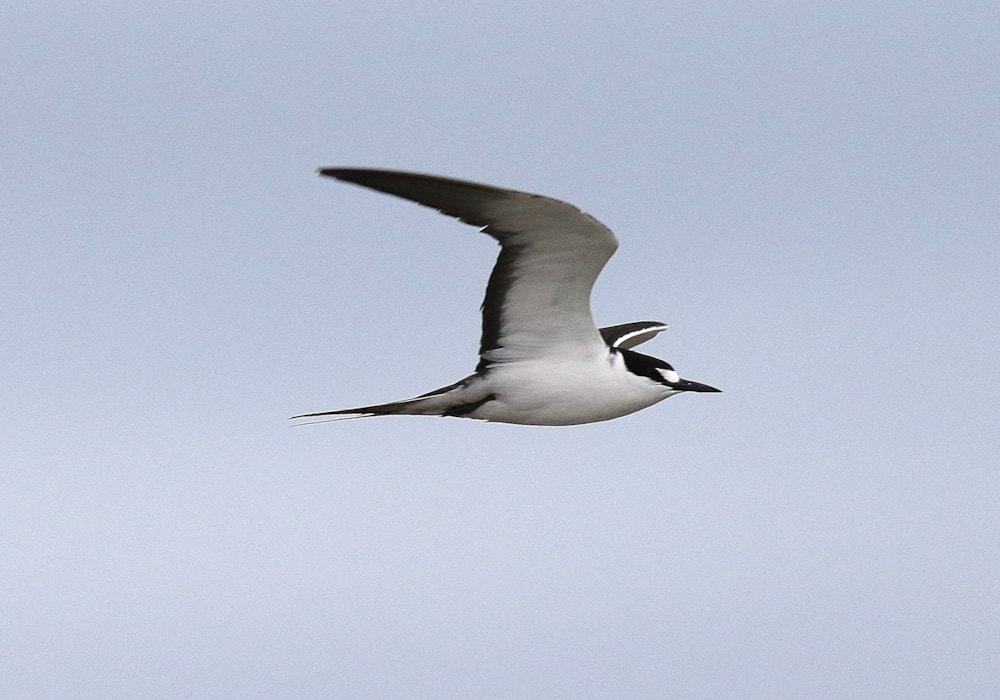 In Moray, the splendid adult male Pacific Golden Plover returned to Findhorn Bay on 3rd and 5th, between mysterious sojourns. Just as alluring as the plover, and similarly restive, was the adult Franklin's Gull, back at Scaling Dam Reservoir, Cleveland, for short visits on 6th and 7th, after randomly popping to Hurworth Burn Reservoir, Co Durham, on 1st. 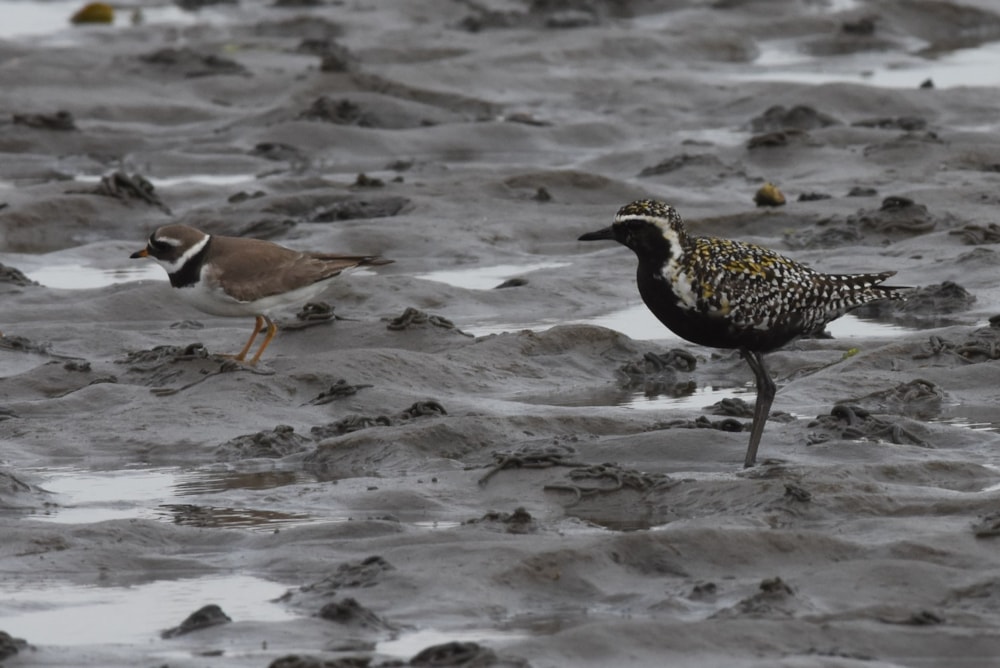 Having racked up 23 days in the limelight at Titchwell, Norfolk, the Lesser Yellowlegs was last seen on the reserve's freshmarsh on the evening of 4th. The first-summer Baltic Gull, bearing a Norwegian ring, frequented the Effingham Street area in Sheffield, South Yorks, to 3rd. 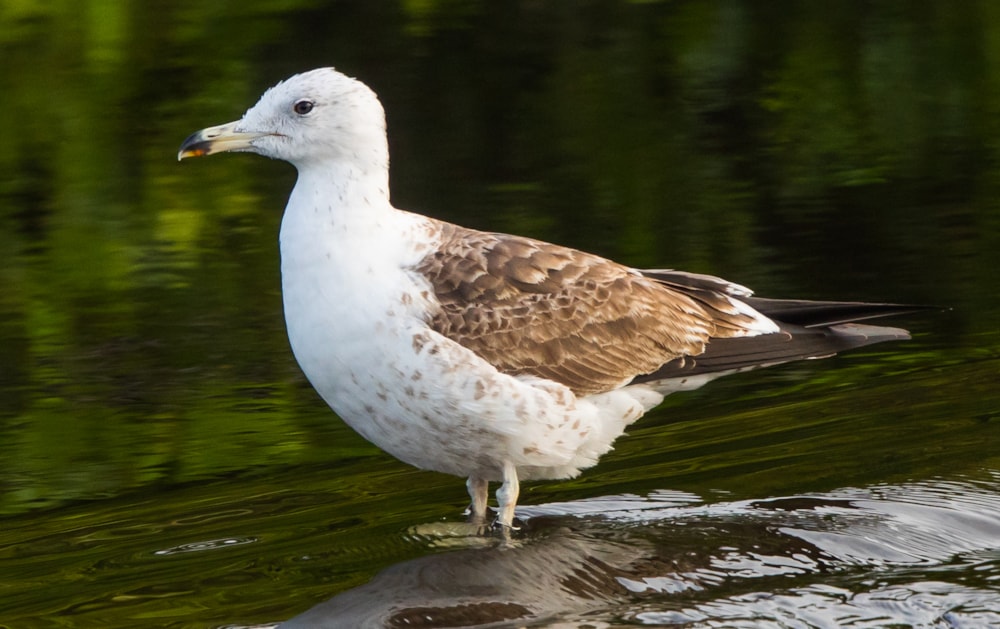 Valyie, on Unst, Shetland, supplied a pristine and quite early Greenish Warbler on 1-2nd. Also on the early side was the first Wryneck of the autumn on 4th, skipping the east coast and turning up far inland at Daventry, Northants. A female Red-backed Shrike spent the day at Landguard, Suffolk, on 1st. St Kilda, Outer Hebrides, still had two Rosy Starlings on 2nd, and two others were on Lewis during the week. One was still on Tiree, Argyll, to 2nd and another was at Vadill of Garth, Shetland, on 7th. A Common Rosefinch lingered on Fair Isle on 3-4th. Meanwhile, an excellent, early influx of Pied Flycatchers took place, with East Anglia and the South-East claiming the lion's share of the 271 reports received of the species this week. Sample counts included 41 in the Spurn area, East Yorks, 17 at Great Yarmouth cemetery, Norfolk, 14 at Aldeburgh, Suffolk and 13 at North Foreland, Kent, on 3rd. By the end of the week, more had filtered through to southern counties such as Dorset and Devon. 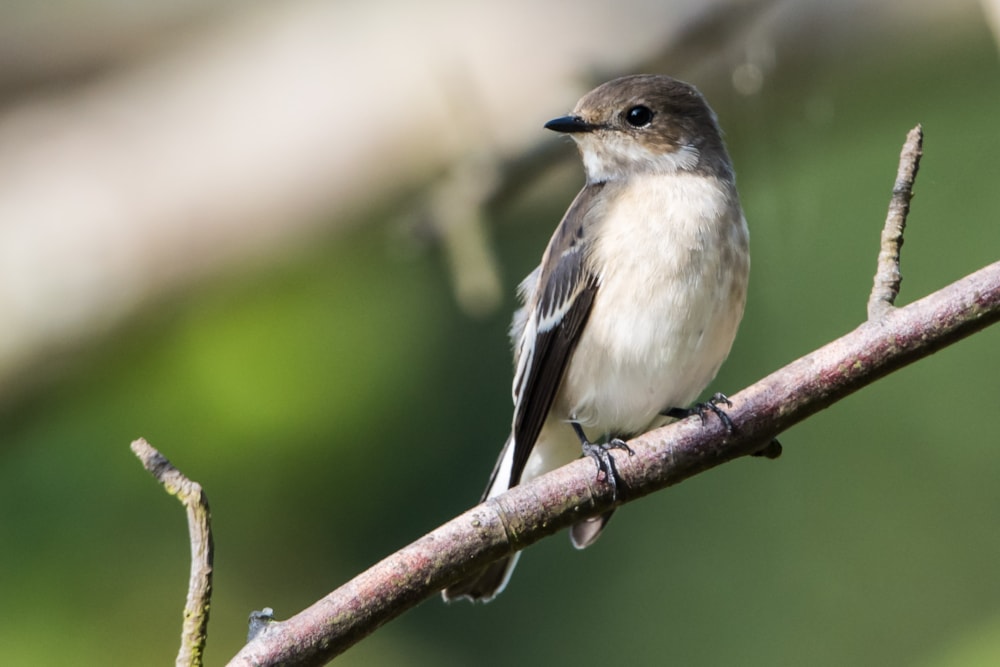 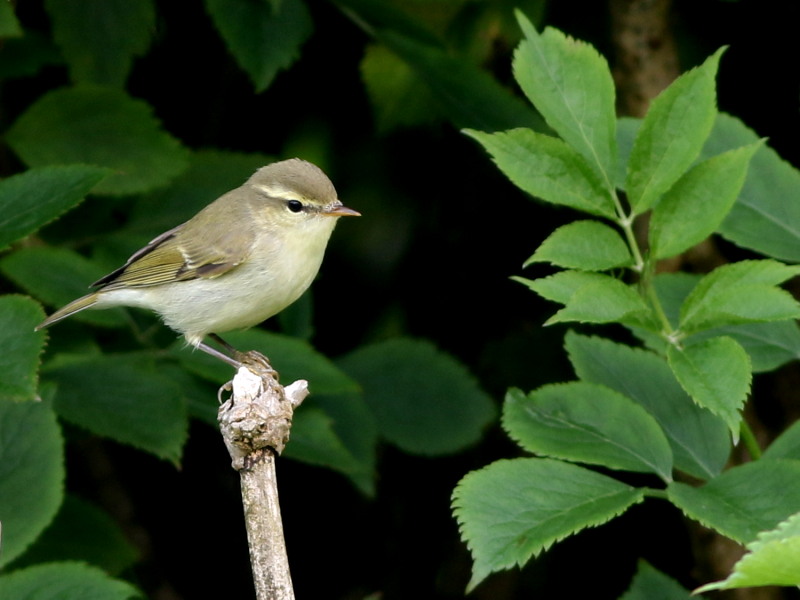 London did well for jammy fly-overs this week, with an Alpine Swift over Gidea Park on 2nd and two European Bee-eaters over Teddington Lock on 7th. The same day produced another Alpine Swift over Burton-upon-Trent, Staffs. On the Outer Hebrides, the Snowy Owl was glued to the Greinetobht area of North Uist all week. 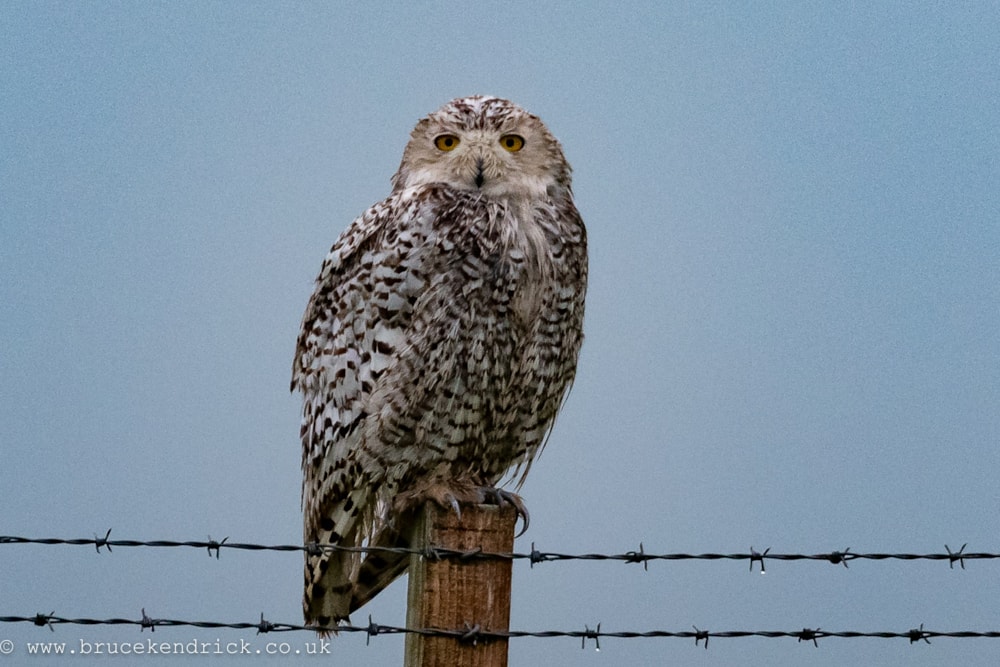 An adult American Golden Plover was on the Kent Estuary at Sandside, Cumbria, on 3rd but scarpered when a Western Osprey flew through. Conceivably, the individual identified at Loch of Strathbeg, Aberdeens, the next day could have been the same bird. The arrival of two White-rumped Sandpipers on 7th did their best to further liven up the wader scene, with individuals at Lower Rosses, Co Sligo, and Redcar, Cleveland.

The adult Red-necked Phalarope continued to rotate around the East Flood at Oare Marshes, Kent, all week. Another dropped in to Cley Marshes, Norfolk, on 1st, only to be replaced by a Buff-breasted Sandpiper two days later. On 4th Blacktoft Sands, East Yorks, turned up another Buff-breast which stuck around for the remainder of the week and showed quite nicely. In Cornwall, Drift Reservoir held onto its adult Pectoral Sandpiper to 6th, while the Northumberland bird saw the week out at East Chevington. New 'Pecs' were on Berneray, Outer Hebrides, on 4th and at Appleford, Oxon, on 6th. Ireland produced two on 5th: at Tacumshin, Co Wexford, and at Lough Neagh, Co Antrim, before another arrived at Lough Beg, Co Derry, on 7th. A Temminck's Stint was a fleeting affair at Staines Reservoirs, Surrey, on 5th and another dropped in to Willington GP, Derbys, the following morning. 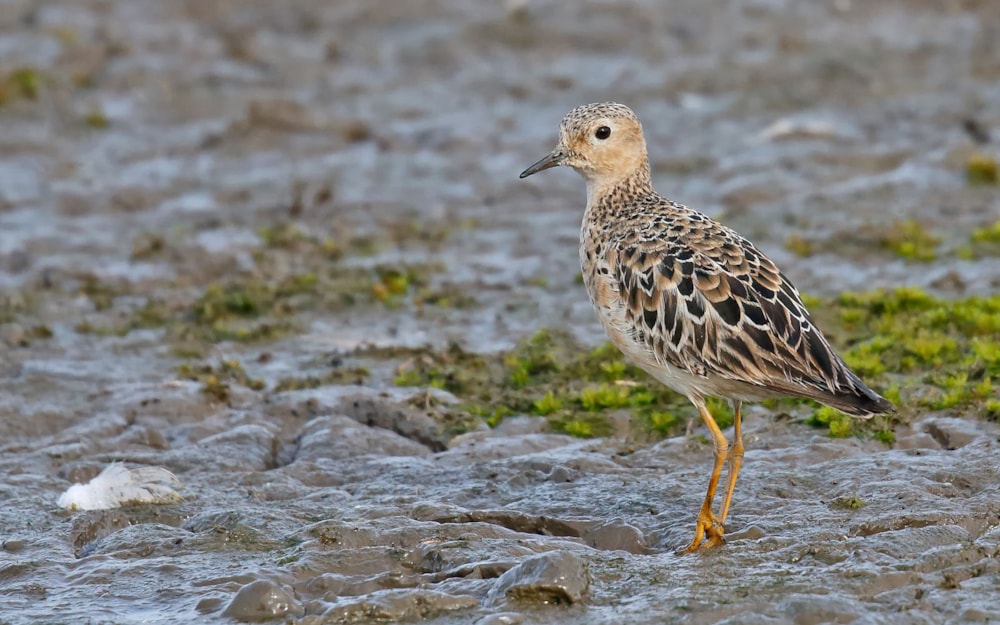 Long staying but furtive Purple Herons continued to demand patience at Littlesea in Poole Harbour, Dorset, to 6th and Rutland Water to 7th. The adult was still at Shapwick Heath, Somerset, to 5th. The Glossy Ibis at Oare Marshes, Kent, was last seen on 1st, while the bird at Matford Marsh, Devon, was reported to 6th. Others were at Titchwell, Norfolk, from 1-2nd and Abberton Reservoir, Essex, on 3rd, before the latter bird seemingly moved to Hanningfield Reservoir from 5-6th.

Cley Marshes, Norfolk, was overflown by a White-winged Tern on 7th. The temptation of not one but two Spotted Crakes picking along the margins of Potter Heigham Marshes, Norfolk, from 3rd proved hard to resist for birders in the area. Both were still showing on 6th but just one was reported on the final day of this review. Another was stumbled upon at Burnham Norton, Norfolk, on 3rd and the bird seen last week at Burton Mere Wetlands, Cheshire, emerged into view on 3rd and 7th. A further individual graced Titchfield Haven, Hants, on 4th. A female Hooded Merganser was encountered at Port Allen, Perth and Kinross, on 3rd but we have received no further updates. A drake Lesser Scaup at Drift Reservoir, Cornwall, from 6-7th arguably supported its case. Essex hosted a Ferruginous Duck at Abberton Reservoir on 4th. Off Blackhall Rocks, Co Durham, the adult drake Surf Scoter was picked out with relative ease on the sea north of the car park till the last report on 5th. Another drake was spotted in Lunan Bay, Angus, on 1st and stayed for at least five days. Dorman's Pool, Cleveland, was a reliable hangout for the drake Green-winged Teal all week.

A drake Ring-necked Duck at Quoile Pondage, Co Down, on 4th was presumably the same bird last seen at the site in late April. The resident Welsh King Eider was tracked down for the first time since mid-June, further up the Dyfi Estuary at Ynys-Hir, Ceredigion, on 3rd. This queen has now been ruling west Wales for over a year, having been found on 26 June 2017. Meanwhile, in Highland, Strontian's resident American Black Duck was still going strong on 7th.

The loyal adult Forster's Tern resurfaced at Soldier's Point, Co Louth, on 7th. In Kent, the adult Bonaparte's Gull was in residence at Oare Marshes throughout. A second-winter Ring-billed Gull was on Vatersay, Outer Hebrides, from 5-7th. Culdaff, Co Donegal, had a White-billed Diver in fine and complete summer dress on 7th, and it transpired to have been offshore all week. 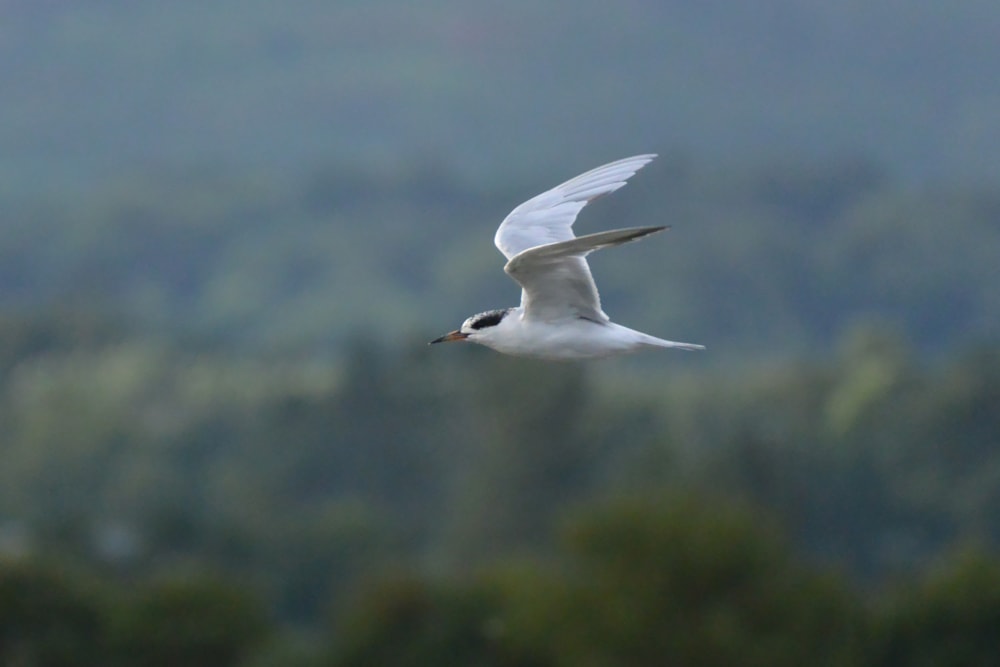 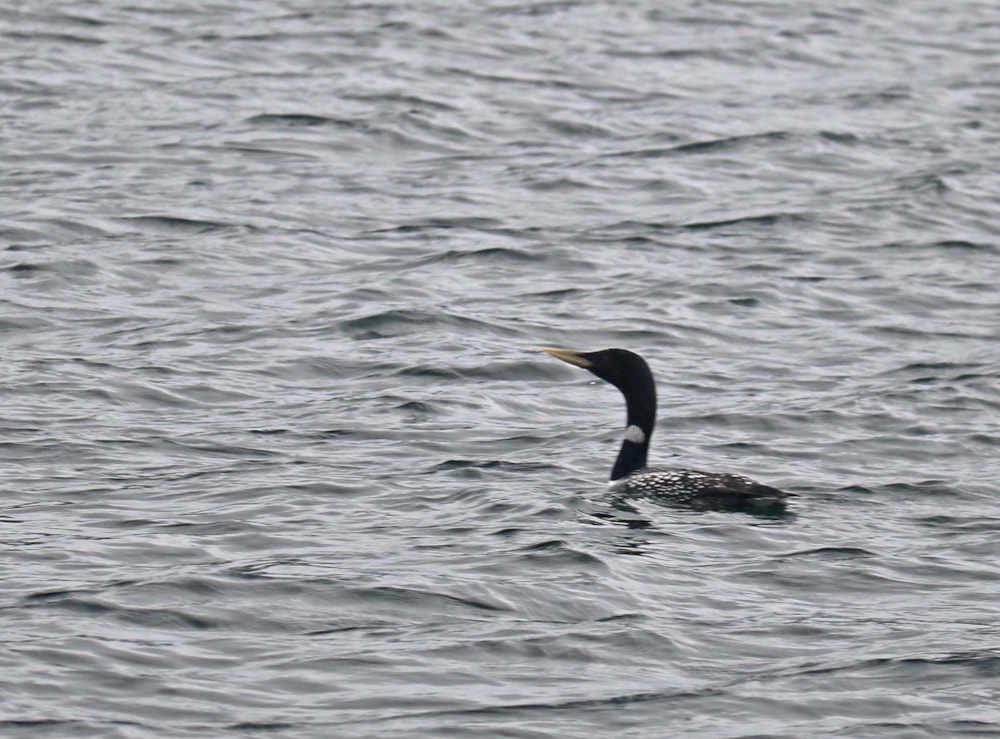 Regular evening pelagics off Scilly on 2nd, 3rd and 6th each picked up a brace of Wilson's Storm Petrels, as well as scoring two Grey Phalaropes on 2nd. Co Cork waters also produced a Wilson's Storm Petrel on 4th, with three-figure totals of Great Shearwaters and another brace of Grey Phalaropes as back-up. Numbers of Great Shearwaters, and indeed Cory's Shearwaters, in the west were otherwise modest. A Sabine's Gull was encountered at sea NNW of Lewis, Outer Hebrides, on 6th and a Long-tailed Skua performed nicely on the beach at Norwick on Unst, Shetland, on 2nd. A Leach's Storm Petrel was a welcome bonus during an overnight ringing session at Druridge Links, Northumberland, on 5-6th. 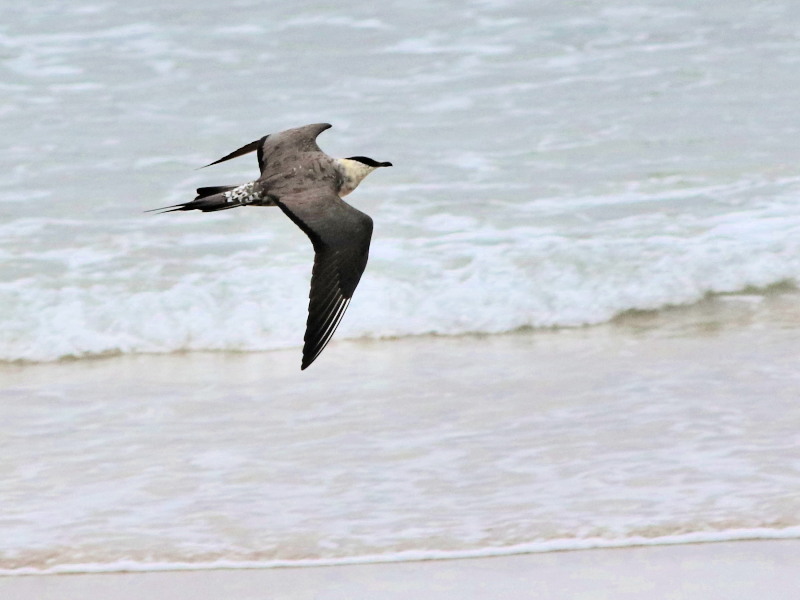 The Spur-winged Lapwing remained unmoved at Slootweg in North Holland, The Netherlands, remaining there all week. Gelderland's Long-legged Buzzard loitered near Megchelen to 4th. In Belgium, a Black-winged Kite was seen at Montenaken, Limburg, on 1st. A Paddyfield Warbler trapped and ringed at Illmitz, Burgenland, was a notable record for Austria on 2nd.

A whale-watching boat off Reykjavík, Iceland, bumped into an adult Black-browed Albatross on 5th, perhaps answering where the German bird has got to. An adult drake Harlequin Duck was at Italiaodden, Svalbard, on 4th.

In France, an out-of-range Western Swamphen visited Etang des Landes, Creuse, on 7th, which – with recent weather in mind – tempted recollection of the dry European summer of 2016 which saw significant displacement, including the first for Britain. Spain had two Elegant Terns at Bahía de Cádiz on 3rd and Israel's Yellow-billed Kite was still roaming Eilat on 3rd. Sicily scored a Trumpeter Finch at Magnisi on 7th.